Tips roll in; arrest made in gas station attack on older man

St. Landry Parish Sheriff’s deputies have arrested a Ville Platte man in connection with a violent attack on an elderly man at a gas station. 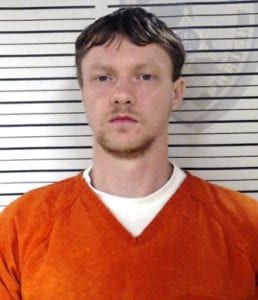 Kenneth Shergold, 29, was booked with simple battery of the infirm and aggravated second-degree battery.

“Video footage caught Shergold sitting in his Kia Rio near the gas pumps when a blue GMC pickup driven by (the victim) pulled into the Nuba gas station.  Shergold  exited his vehicle, approached (the victim) from behind, and for no apparent reason, struck him numerous times in the head, back and body with a tire iron. Shergold then dropped the tire iron and continued striking him with his fist and knees.  After the beating, Shergold then left the scene in his vehicle,” Sheriff Bobby Guidroz said.

St. Landry Crime Stoppers was notified of the incident and posted the video on their social media website and disbursed it to the media for help in identifying the suspect.

Last week, one of the anonymous tips identified the suspect as Kenneth Shergold of Ville Platte, who also drove a white Kia Rio. Detectives began searching for Shergold throughout the weekend but could not locate him.

On Monday, another tip was received using the Crime Stoppers P3 app advising that the suspect that beat up the elderly man in Nuba, was involved in an assault of a female at the Super Walmart Center in Ville Platte.

Detectives drove to Ville Platte to interview the victim and requested the assistance of Ville Platte Police and the Ville Platte City Marshal’s Office.  The victim said she was approached by an unidentified white male, (later identified as Kenneth Shergold), when suddenly, he grabbed her by the arm.

The victim pushed Shergold away, and he told her, “I must have lost my mind” and then fled in his car.  The victim and additional witnesses identified Shergold and his vehicle as the same person who was seen in the Nuba video.

Officers with the Ville Platte Police Department, and the Ville Platte City Marshall’s office, located the vehicle and Shergold at the Freddie Dun address.  Shergold’s vehicle was an exact match of the vehicle seen on the business surveillance video, and had identifying damage seen in the video from Nuba.

Shergold was then transported to Ville Platte Police Department for questioning and was advised of his Miranda Rights. Shergold alleged said: “I need an attorney because my mom showed me the video that you’re about to show me, and I don’t remember doing that.”

The interview then stopped, and Shergold was booked by the Ville Platte Police, then transported to the St. Landry Parish jail for processing.

“If not for the anonymous tips, the media’s assistance in airing the footage, and good old fashion boots on the ground investigation by law enforcement, this case might have never been solved,” Guidroz said.

No motive behind both random attacks could be obtained because Shergold refused to answer questions without his lawyer present.

Sheriff Guidroz would like to thank all who provided information and assistance that led to Shergold’s capture and arrest.