Avoyelles Parish Sheriff’s deputies are looking for an Opelousas man accused in a shooting earlier today.

Justin Molbert, 21, is wanted on a warrant for two counts of attempted second-degree murder. He should be considered armed and dangerous, deputies say. 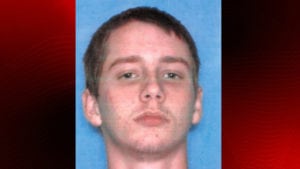 Molbert is accused of driving up to a man and woman walking on a road in Dupont at about 1 p.m. today. Deputies say Molbert started arguing with the man, then pulled out a gun and fired it several times at the couple.

The man was hit in the leg and was transported to a hospital via helicopter. His injuries are believed to be non life-threatening, deputies say.

Anyone with information about Molbert’s current whereabouts is asked to call the Avoyelles Parish Sheriff’s Office at 318-253-4081.