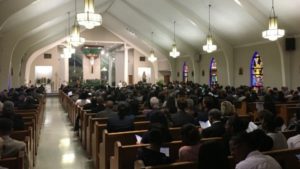 The legendary blues and zydeco musician died a week ago at the age of 75.

The world renowned guitar player worked with dozens of musicians over his decades-long career, many of which considered him family.

Rockin’ Dopsie, Jr. of the Rockin’ Dopsie Jr. and the Zydeco Twisters frequently referred to Lil’ Buck as “Buck-a-roo.” He believes Clifton Chenier gave him that nickname.

“Buck-a-roo was always a great guy, a jokester, had a great soul, a man of God. He was just a beautiful person inside and out,” said Rockin’ Dopsie, Jr.

Dopsie met Lil’ Buck when he was a child when he played with his father, Rockin’ Dopsie. As he got older, he started playing with them, even touring with Lil’ Buck around Europe.

“Buck-a-roo told my dad, when I was playing with my dad… Buck-a-roo was like, ‘Man, I can’t stay in the room with David,'” recalled Dopsie. “He said, ‘He don’t sleep. He run the rooms all night. I can’t sleep with him. He coming in all hours during the morning.'” Dopsie laughed. “So, I had to get a different roommate.”

Lee Allen Zeno, a musician and longtime friend of Lil’ Buck, says one of his first memories of him was when he performed with the Top Cats.

“They would rehearse in Carencro twice a week at the rock and roll club. I was too young to go into club, but I would stand on the bucket and watch them through the window practice,” chuckled Zeno.

Lil’ Buck was a perfectionist when it came to his music.

“They go to rehearsal, like, let’s say they get there at 5 in the evening. It’ll be 3 or 4 in the morning, and they’d just be leaving, going home from rehearsal,” said Zeno.

Corey Ledet says Lil’ Buck played guitar in his band Corey Ledet and His Zydeco Band for about five years.

“The way he would instruct me to lead the band is a way I never thought about. Following his instructions, it really worked. So, he taught me how to be a band leader and run a very tight ship.”

Beyond the professionalism, there was a sense of humor.

“He’s such a funny guy. Like I said, the jokes… He always liked to smile. If he’s smiling, he’s going to make sure you’re smiling, too,” said Ledet.

Friends say the impact Lil’ Buck made will live on around the world.

“We definitely lost an icon in Louisiana music. We really did,” said Dopsie. He’s going to be missed by so many, not only from Louisiana but from around the world.”

Here are our previous stories about his passing: