Lafayette Public Works wants to extend Robley Drive and add a roundabout at its intersection with South City Parkway.

The proposal would seek to extend Robley to Crestlawn Drive. 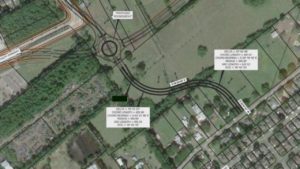 While Robley Drive is typically bustling with cars, the neighborhoods on Crestlawn are typically quiet. Some say that could soon change.

“It seems like it’s a road that would lead to absolutely nowhere but it’s going to bring traffic into this area that normally wouldn’t be here. They’re going to come back here and wander around and think there’s another access but there’s not,” said Marche Lamarche who lives nearby and travels Crestlawn every day.

“If it was going to connect all the way to the other Robley then I could understand,” said another homeowner, Kyel Robinson.

Public Works says this road will give residents a direct route to Ambassador Caffery.

Officials say the road will also help alleviate traffic at the intersection of Ambassador and Johnston.

“The road would come here to my driveway, to my garage, my whole house would be cut,” said Chad Bellard who grew up in the neighborhood.

He was planning to build his dream home there but now he says those plans are on hold because about half of the property would have to be bought by LCG.

“I saved all my money up to purchase the property, my family’s property. My parents live down the road, my brother also lives down the road. I wanted to live close my family and then we found out the city wants to put a road through my property and take my dreams away,” said Bellard.

On Thursday LCG will be holding a town hall at the south regional library where they will present the most up to date plans and give residents a chance to voice their concerns.