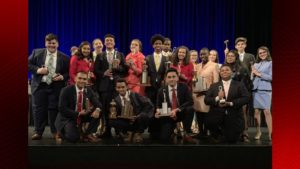 Coach Jacob Simon says that Comeaux students competed for top honors against 2,800 students representing 800 schools from across the country. The tournaments eleven events begin with over 250 competitors.

Simon says that Comeaux High received the Directors Award of Excellence Speech Sweepstakes and is the #1 ranked Speech Team for the 3rd year in a row at the NCFL Grand National Tournament.

The national tournament was held May 25 and 26 in Milwaukee, Wisconsin.

Comeaux’s results for Grand Nationals are as follows:

Reaching the Octo-Final Round (top 48 in an event):
Tori Lalonde in Dramatic Performance

Reaching the Quarter-Final Round (top 24 in event):
Amiah Richardson in Declamation

Reaching the Semi-Final Round (top 12 in event):
Jamie Jones in Original Oratory and Damari Padilla in Declamation

Reaching the Final Round (top 6 in the country in the event) and Placing: