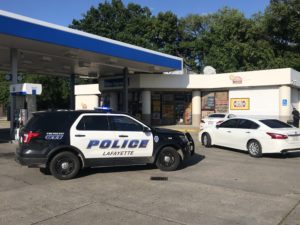 Lafayette Police say that two people have been injured following a shooting on Moss Street.

Police say the call came in around 4:35 p.m. as a shots-fired incident.

The shooting happened near Police Precinct #4 on Moss Street near Castille Avenue.

Once on scene, officers located two individuals who had sustained gunshot wounds.

Both were taken to a local hospital with non-life-threatening injuries.

A spokesperson with the Lafayette Police Department says a physical altercation resulted in the shooting. Details on that altercation and who fired those shots have not been released.

Police say after the shots were fired, those on scene fled the area. No suspects were detained.

Officers are currently interviewing witnesses. The public is asked to call Lafayette Crime Stoppers if any information is known about this incident.