The cause of a two-vehicle crash that caused one of them to ignite Saturday is under investigation.

Scott firefighters responded to the crash at 3:30 p.m. in the 400 block of Heide Circle. 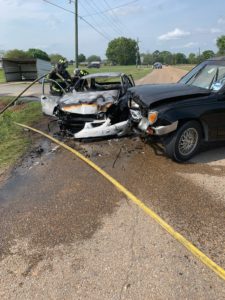 Fire Chief Chad Sonnier says one of the vehicles collided head-on with the other, causing the fire.

The drivers of both vehicles safely escaped before fire personnel arrived.

The driver of the burning vehicle received medical attention at the scene and was taken to a local hospital. The chief says the driver’s injuries appeared to be not life-threatening.

The driver of the other vehicle did not need any medical attention.

No firefighters were injured.