King Gabriel and Queen Evangline LXXX are in the midst of their Mardi Gras festivities this weekend.

The royalty of the Southwest Mardi Gras Association gave interviews to the media last week. 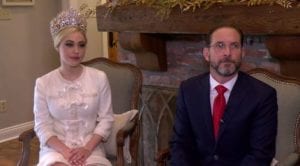 Madeline Busch, Queen Evangeline, said Mardi Gras has been a tradition in her family for generations.

“We have several previous queens in the family, and it’s really special to be chosen,” Busch said. “It’s been amazing to be able to live out that legacy. It’s been a dream of mine since I was a child. It’s just been awesome.”

Busch said she can’t wait for the festivities, including her own parade on Monday night.

“It was really a surreal experience. I was really caught off guard. I never thought I would be asked to be king,” Montgomery said. “Our Mardi Gras traditions began with our grandparents, so we were involved with it as children. It’s really a fantastic honor to be chosen.”

Montgomery said he’s attended several parades, and there are events this weekend to attend. Tuesday is his parade, and that night the Krewe will hold their ball.

Montgomery said he’s honored to reign over the “multigenrational celebration that we in Lafayette and the Acadiana area have every year.”