The Lafayette club plays pétanque, a French game similar to bocce in which balls are bowled toward a target ball. 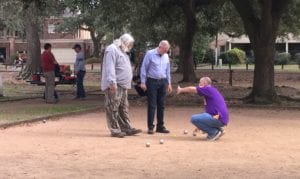 The second and fourth Sunday of every month is the regular meeting day of the group, but everyone is welcome to attend, even beginners.

They meet at 2 p.m. on the pétanque courts at the north end of Girard Park, near the street that passes behind the alumni center.

“We’re out here getting ready to play some pétanque in preparation for a tournament we’re going to have on March 23,” said Mike LeBlanc, captain of the group. “Really it’s almost a festival, because we’re going to be playing all over the state of Louisiana.”

The event will include a presentation by a world champion, as well as a visit from French pétanque group to provide instruction to local kids. There also will be some teams from other states coming to play.

“It’s a game that anybody can play,” LeBlanc said. “My favorite part of this is speaking French. You don’t have to speak French, but you will hear it. That’s kind of the hidden agenda here.”

LeBlanc encouraged anyone who is interested to come out and learn to play the game.

Beginners are always welcome, and you don’t need to bring anything, because the members always bring extra balls to share. They’re also ready to teach beginners the competitive but relaxing game.

“Pétanque is a French game with roots in ancient history,” the group’s website explains. “Similar to horseshoes and bocce ball, the game requires precision, finesse and a great deal of concentration that may not be apparent if you’re simply a spectator. This popular lawn game is played throughout the world, for both fun and serious competition.”