Louisiana Drillers paying tribute to IceGators during this weekend’s games

The Louisiana Drillers are competing against the Texas Brahmas for the number one spot in the Bauer NA3HL South Division.

The game is happening at Planet Ice with the Drillers paying tribute to the Louisiana IceGators by wearing IceGator gear.

Special guest Reed Kotalik is in the audience. If you’re not familiar with 8-year-old Reed, he’s a track and field athlete with cerebral palsy. When he’s not running, he travels the country to raise awareness of the disease and different organizations. 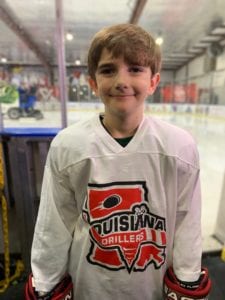 IceGator jerseys are also being auctioned off.

If you missed today’s game, the Drillers are playing a second game apart of the tribute weekend tomorrow at 4 p.m.