Officials in Ville Platte have announced an official state of emergency

Trees and power lines were knocked down during morning storms that moved through Acadiana.

Mayor Jennifer Vidrine says that the state emergency was declared and a curfew is in place until further notice.

She asks that residents shelter in place at this time. Vidrine says that a tornado touched down in the area, but that information has not yet been confirmed.

Cleco crews are on scene working to restore power. An assessment of the damage found that several power poles have been ripped from the ground. The mayor says residents should be prepared to remain without power for a few days.

Vidrine urges that residents stay safe and not travel. She says she will be in touch with residents through emergency phone messages.

According to the mayor, the following roadways have closed to traffic.

No injuries or fatalities have been reported according to Vidrine.

Damage has been reported in the area including Hebert’s Boudin and Cracklin which had part of its roof taken off of the building.

KATC’s Dannielle Garcia was at the store this morning following the reported damage.

The owner of the store says that several customers were inside the store when strong winds hit the area lifting up the stores metal awning and knocking over gas pumps.

One truck was hit by the awning. The person inside that vehicle tells KATC he was able to escape uninjured.

Workers are on the scene at the store removing the awning from the building and making sure the gas pumps are secure. 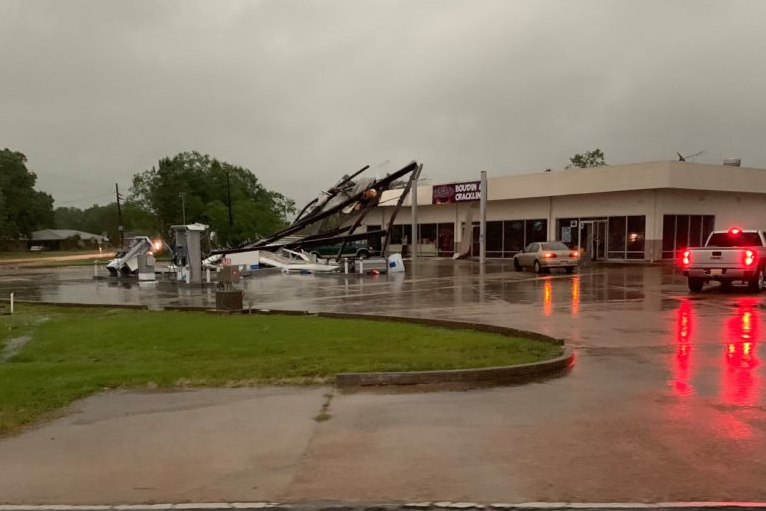 Champagne’s Quality Foods has also received major damage including windows blown out of the building. Other storm damage was also reported.

KATC’s Dannielle Garcia will have more on the damage throughout the day and tonight at 5:30 pm on KATC.

To read more about damage in Acadiana, click here