A woman accused of attacking a police officer in an incident that left her friend dead has pleaded guilty, the Ville Platte Gazette is reporting.

Dequince Brown was arrested in the 2017 incident that left DeJuan Guillory, 27, of Mamou, dead. Brown and Guillory were allegedly riding on an ATV when a deputy investigating a stolen ATV stopped them.

Brown initially was booked by State Police with attempted murder of an officer. Last week, the Gazette reports, she pleaded guilty to battery on a police officer and attempting to disarm an officer. For the first charge, she was sentenced to five years in prison, with all but 18 months suspended, followed by three years of supervised probation. For the second charge, she was sentenced to two years in prison, with all of that suspended, followed by two years of supervised probation, the newspaper reports.

Brown’s attorney told the Gazette that his client wanted everything to be over with and felt the plea deal was “fair.” The Evangeline Parish District Attorney’s Office told the newspaper that the deputy also approved the plea deal. To read the Gazette’s whole story, which includes all the details from the hearing, you’ll have to buy a subscription. To do so, click here.

Back in 2017, a grand jury reviewed the State Police investigation but declined to indict the deputy on any charges.

According to affidavits filed in the State Police investigation of the shooting, the deputy conducted a traffic stop and asked to see Guillory’s and Brown’s IDs, which neither had. During an argument, Guillory then hit the deputy in the head causing him to feel dazed and “see stars.” The deputy then drew his gun and told Guillory to get on the ground. The affidavit states that Guillory then laid on his stomach, but when the deputy tried to handcuff him, he put up a struggle. At that point, Brown jumped on the back of the deputy, placed her arm around his neck, punched him, pulled his hair, and tried to grab his gun, according to the affidavit. During the struggle, Brown stated, “We are going to kill him,” the affidavit states. The deputy then shot Guillory and ordered Brown to get off his back, which she did.

According to Brown’s statement to police, during the argument following the question of legal identification, Guillory punched the deputy. The punch caused the deputy to become dazed and possibly lose consciousness. The deputy then drew his gun and ordered Guillory to get on his stomach. While attempting to handcuff Guillory, Brown says she approached the deputy from behind, choked him and bit him. The deputy then shot Guillory and Brown let go of the deputy.

Authorities released this picture of the deputy, taken at the hospital where he was treated after the incident: 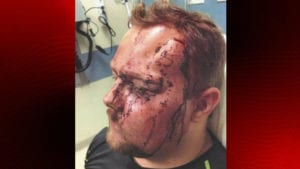