The incident began last night at about 5:30 p.m. when a passenger on the bus told the driver he had chest pains and needed to get off the bus. The driver pulled over to the shoulder and called 911 for an ambulance. When the paramedics arrived, the man got into the ambulance.

Then another passenger told the driver that the sick passenger had made comments that led him to believe there was a bomb on the bus – so the bus driver called 911 again, for help with the bomb threat.

When deputies arrived, a man got off the bus and ran away. He was later identified as Albert Williams, 29, of New Orleans. Deputies chasing Williams allegedly saw him drop some things into a drainage ditch, then keep running. Deputies caught him, then picked up the stuff in the drainage ditch – which allegedly was a Ziploc bag containing almost a kilo of powder cocaine.

Both men were arrested and booked into the Calcasieu Correctional Center.  During a body scan, while being booked in, Pottinger allegedly pulled marijuana from inside his pants, placed it in his mouth and ingested it.

Williams is booked with possession of cocaine over 400 grams; obstruction of justice; and resisting an officer.  Judge Robert Wyatt set his bond at $57,500.

Pottinger was booked with possession of marijuana; possession of drug paraphernalia; possession of CDS V with intent to distribute; contraband in a penal institution; and obstruction of justice.  Judge Robert Wyatt set his bond at $15,500.

The Louisiana State Police and Westlake Fire Department were contacted for assistance and no bomb was found.

Here are the stories from last night:

WESTLAKE – UPDATE: I-10 East at I-10/I-210 and the PPG Drive exit ramp on I-10 East have reopened after a bomb threat was made on a commercial bus traveling on the interstate. Congestion remains at LA 27 (S. Beglis Parkway). 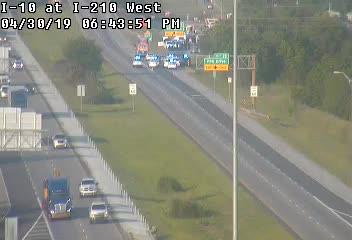 The incident happened at Milepost 26.

According to KPLC, a suspect is in custody and Louisiana State Police technicians are en route to check the bus.

A spokesperson for state police said the person who made the threat was on the bus, which is a Megabus. The bus was evacuated.

Eastbound traffic is currently being diverted to I-210 East until the situation is resolved.

The public is asked to avoid the area and expect delays.