Two teens are under arrest after an armed robbery in Lake Charles.

The Calcasieu Parish Sheriff’s Office responded to a call of an armed robbery of a convenience store in the 6700 block of Nelson Rd. in Lake Charles this morning around 6:00, according to Kim Myers, spokeswoman for the Calcasieu Parish Sheriff’s Office. The investigation revealed a man, went into the store with a weapon and demanded the clerk give him money from the cash register. The suspect stole an undisclosed amount of cash and fled the store.

During further investigation detectives learned the identity of the suspect that entered the store brandishing a shotgun was Wyatt J. Guillory, 18, of Lake Charles. Detectives also learned there was another man, identified as Zachary C. Hebert, 17, of Iowa, who assisted in the planning of the robbery, the spokeswoman said. The investigation revealed Hebert allegedly drove Guillory to the store and also provided Guillory with the shotgun. Guillory and Hebert divided the stolen money after the robbery. Both Guillory and Hebert were arrested at their residences and booked into the Calcasieu Correctional Jail and charged with armed robbery; and armed robbery with a firearm. Judge Michael Canaday set both their bonds at $425,000.

The spokeswoman said detectives have recovered a portion of the stolen money along with the firearm believed to be used during the robbery.

Calcasieu deputies are searching for a man who robbed a convenience store this morning in Lake Charles.

Deputies say an armed man entered the store located in the 6700 block of Nelson Road and demanded money from the register. The suspect then fled the scene in an unknown direction.

Surveillance video taken at the time of the robbery shows the suspect enter the store and point a weapon at the clerk.

Anyone with information on the armed robbery is asked to contact the Calcasieu Parish Sheriff’s Office at 337-491-3605. 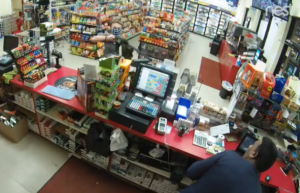