Five people are in jail after four of them allegedly teamed up with a security guard at a Lake Charles casino for an armed robbery, officials say.

According to a spokesperson with the Calcasieu Parish Sheriff’s Office, deputies responded to the Lucky Star Casino on Highway 171 at 4:30 a.m. and learned two masked men, later identified as 17-year-old Tre’von Gray and 17-year-old Joshua Stewart, walked inside with a gun.

Gray and Stewart allegedly pulled out the gun while demanding money from the security guard.

The security guard gave the two teenagers some money, and the teenagers fled the scene in a white Chevrolet Impala driven by 38-year-old Amie Nelson, the spokesperson says.

Deputies say two people were inside of the casino gambling during the robbery.

Investigation revealed the security guard for the casino, 38-year-old Brandon Cornell Guillory, planned the execution of the robbery with Gray, Stewart, Nelson, who is his fiancée, and 17-year-old Jashone Dean Beverly, according to the sheriff’s office. 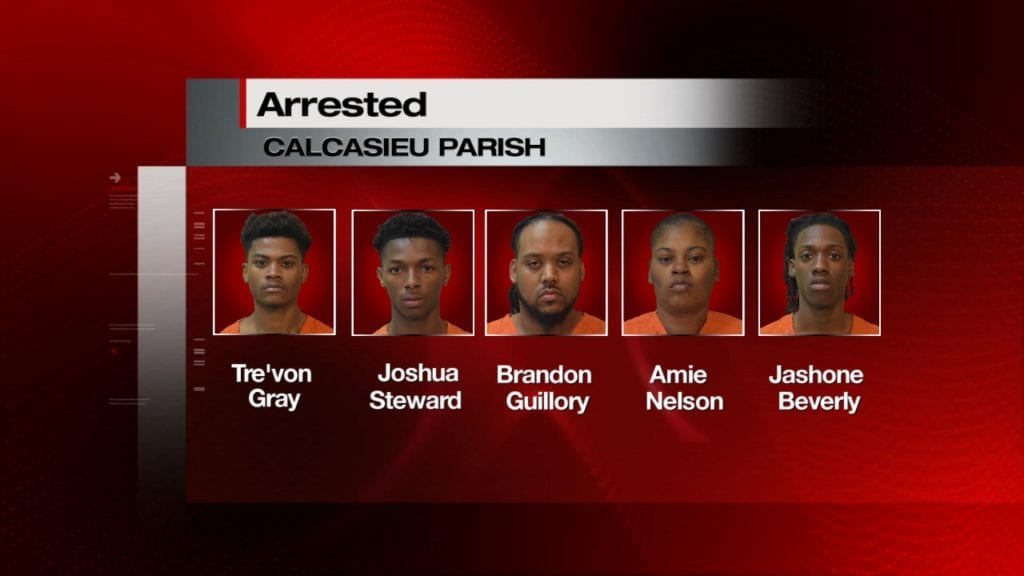 Deputies say Nelson and Beverly were seen on surveillance in the casino “preparing” for the robbery.

Nelson is said to have been the driver during both trips to the casino: the initial trip and the armed robbery.

Deputies also say Guillory provided them with false information in an attempt to hinder the investigation.

Deputies recovered the stolen money and items used in the robbery.

The spokesperson says Nelson is currently on parole after being convicted of first-degree robbery.

They were all booked into the the Calcasieu Correctional Center.

All suspects are from Lake Charles.