A St. Martinville Sr. High Schools student is back at her home school and finishing her senior year after her family chose to pull her from school due to excessive bullying. The student and her mother have now partnered with the school to combat the issue.

Tori Frederick and Dawn Frederick say their lives were turned upside down for three years. They now give back to the school where the bullying took place and the community that surrounds it.

“I switched schools due to bullying and I really wanted to come back because when I switched school I realized others opinions didn’t really matter and I missed my friends. My mom said the only way I could come back is if I would leave an impact and do something to leave behind,” Tori said.

The bullying got so bad that Tori took herself out of sports, isolated herself from her family and begged her mother to allow her to switch schools. Her mother says she was forced to save her child’s life.

“I guess unless you go through it as a parent and have to watch your kid give up what they love… ”
“It’s hard watching your kid because you feel like as a parent your job is to protect them and I think it got to a point to where my husband and I felt like we were failing her. She was such an outgoing person and we never had to worry about her. Tori was the person that she would help anybody, she would reach out to anybody, she was friends with everybody and I think that’s what led to her being bullied,” Dawn expressed.

After Dawn agreed to allow Tori to go back to school with the stipulation of making an impact, Tori reached out to her friends a couple of weeks before senior year started, asking them to help her start a club. The club was originally an anti-bullying club but has now turned into the REACH club.

REACH stands for Respect, Encourage, Accept, Change and Help. The club now has 51 members and is growing more each day.

“I was a tomboy, I wasn’t really girly and people would pick on me and call me a man because my voice is heavier than other females. So they’d pick on me.” said a member of the reach club.

Some members of the group are victims, and others just want to be friends to those in need.

“I don’t think it’s cool. I don’t think its funny. Everyone has their own problems and we are all trying to cope with everyday life. So, if you’re making it harder for them you need to give people a break,” said another member.

The members of the group say they are doing more than just combating bullying. The club is also about community service and giving everyone a voice.

The principal of the school says he understands that bullying is a problem that is widespread, and he supports anyone who wants to work to find a solution and bring the issue to light.

The REACH club is hosting a community walk on Saturday where the students will give testimonials. There will be guest speakers and musical performances. There will also be a balloon release in honor of lives lost to bullying. 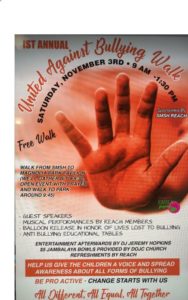