The summerlike heat and humidity is back, and it looks like it will be sticking with us until about late September.

That means we will have another hot and humid afternoon on Sunday with highs in the low 90s and feel like temperatures topping out near 102. 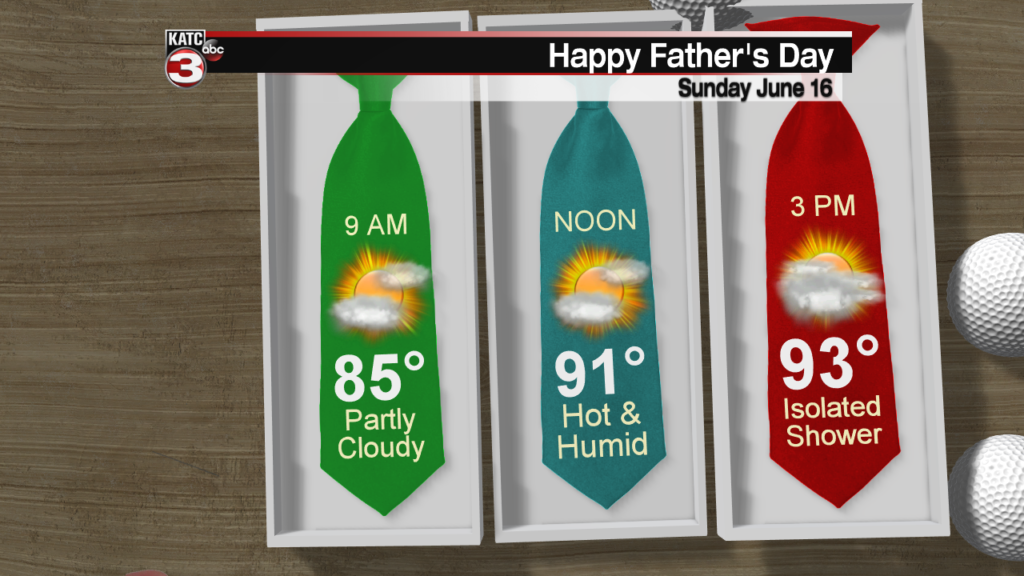 For the most part Father’s Day looks dry but as we move into the afternoon and evening we will have to watch for the chance for a few scattered showers and storms.

Models have been all over the place but what they are suggesting is that a large scale outflow boundary will be diving south towards the area from the ArkLaTex.

Most models have the system holding together until it reaches Alexandria but as it then moves south the models have the rain dissipating or stay off to our east in Texas.

Thus, I am going with a 20-30% chance for a few showers Sunday afternoon mainly north of the interstate but we will have to watch this system closely when it develops to see where it ends up going and if it stays together.

Here is a look at the latest Futurecast:

Moving into the first half the work week a couple upper level shortwaves will try to slide over Acadiana increasing rain chance to about 40% for scattered showers and storms but neither day with be a wash out.

With these showers and storms a few will produce heavy downpours with lots of thunder and lightning but I’m not expecting any severe weather or flooding as these storms should only last about 30-45 minutes.

When it’s not raining it will be hot and steamy with highs in the lower 90s and heat indices near the triple digits.

Wednesday and Thursday rain chances back off a little bit down to 30% for your daily pop-up showers in the afternoon otherwise we’ll have a mix of sun and clouds with highs a degree or two warmer in the low to mid 90s and heat indices above 100.

By the end of the week into the weekend we will have a better chance to miss the showers as they will be very isolated if any do fire up in the afternoon with the daytime heating but that means more heat and humidity with highs in the low to mid 90s and feel like temperatures in the triple digits.