Memorial Day Weekend usually marks the unofficial start of summer, and this weekend the weather in Acadiana will be in full summer mode as high pressure dominates across the entire Gulf Coast.

Fortunately, dew points and relative humidity will be a touch lower this weekend, but with daytime highs in the lower 90s, heat indices will still rise into the upper 90s, and perhaps push the 100 degree mark moving into Monday and parts of next week.

In the near term, expect fair skies overnight with a few more clouds moving in for Saturday morning.

Lows area-wide will be in the low-mid 70s Saturday morning. 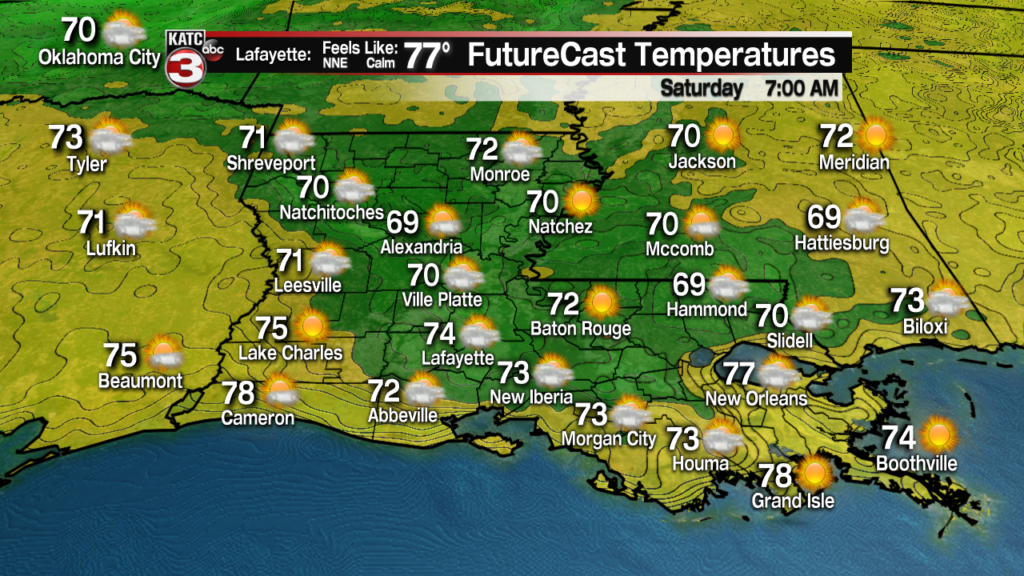 Saturday will be marked by a sun and cloud mix in the morning and will segue into mostly sunny skies for the afternoon. 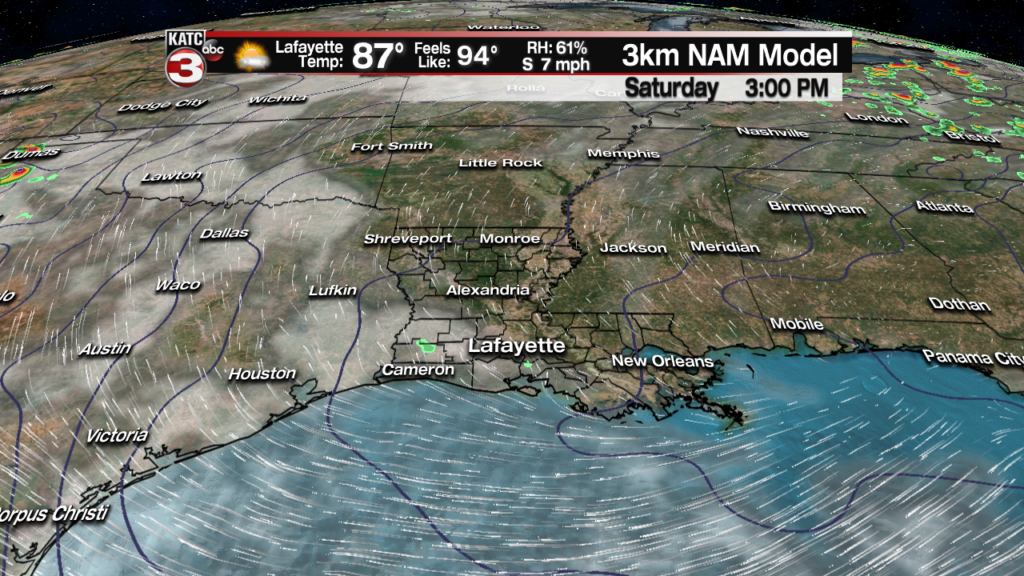 Highs tomorrow will likely be in the 91-92F degree, with readings closer to the upper 80s near the coast, and perhaps a degree of two hotter in the northern portions of Acadiana. 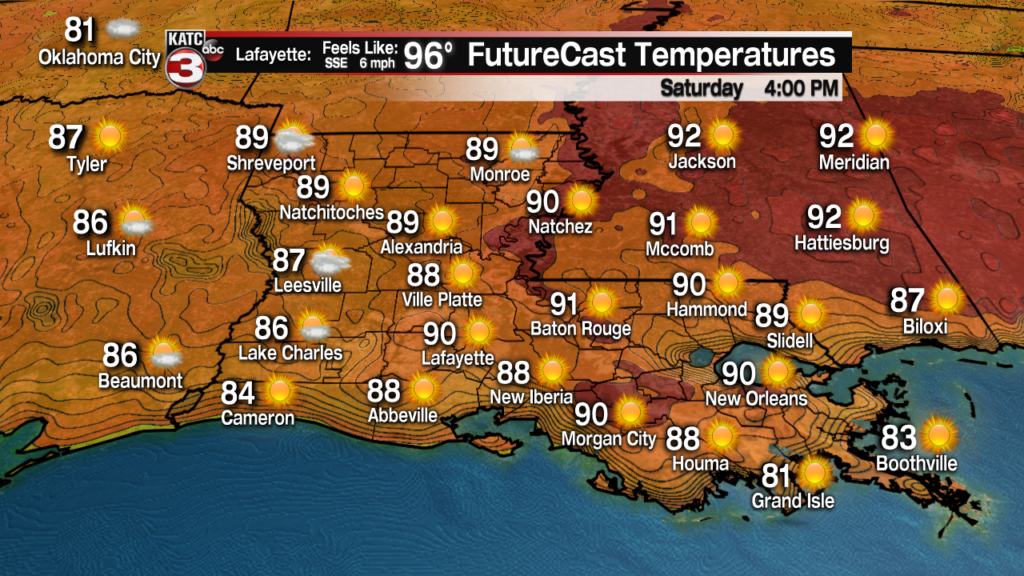 Much the same can be said for Sunday, with perhaps a slightly cooler start followed by a hotter finish with more sunshine expected as compared with Saturday. 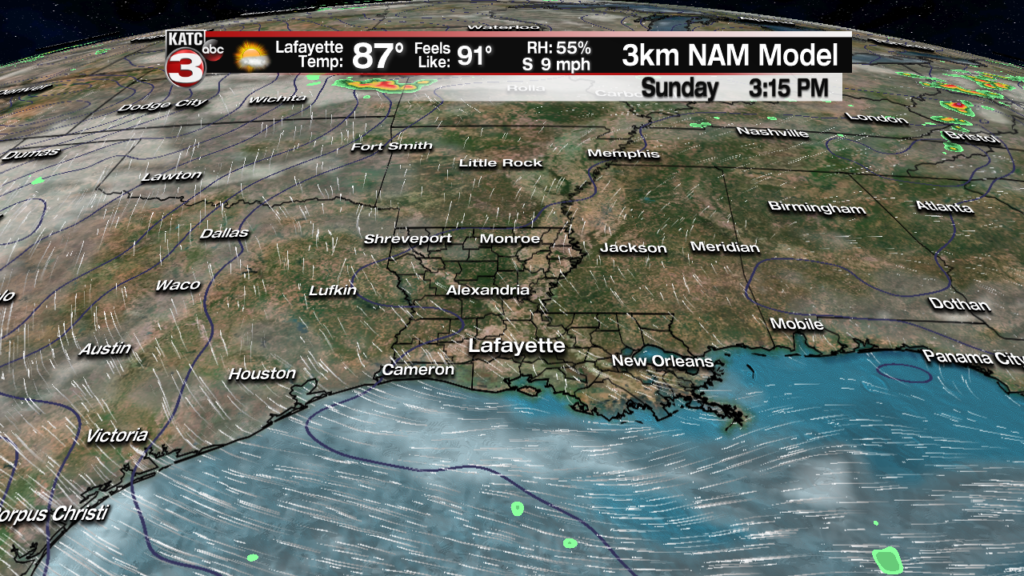 Highs Sunday may push the mid-90s in spots while heat indices will be planted in the upper 90s during the afternoon. 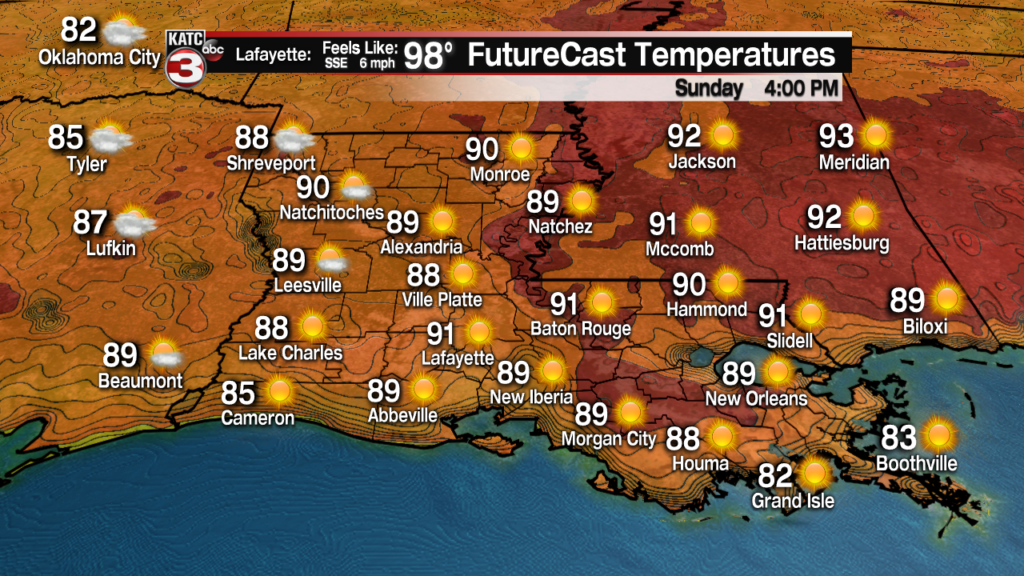 Mostly sunny skies with highs n the lower 90s are expected once again for Memorial Day.

After Monday, the ridge of high pressure will flatten for a few days opening the door for some scattered afternoon showers and thunderstorms Wednesday through Friday, with highest rain chances centered on Thursday. 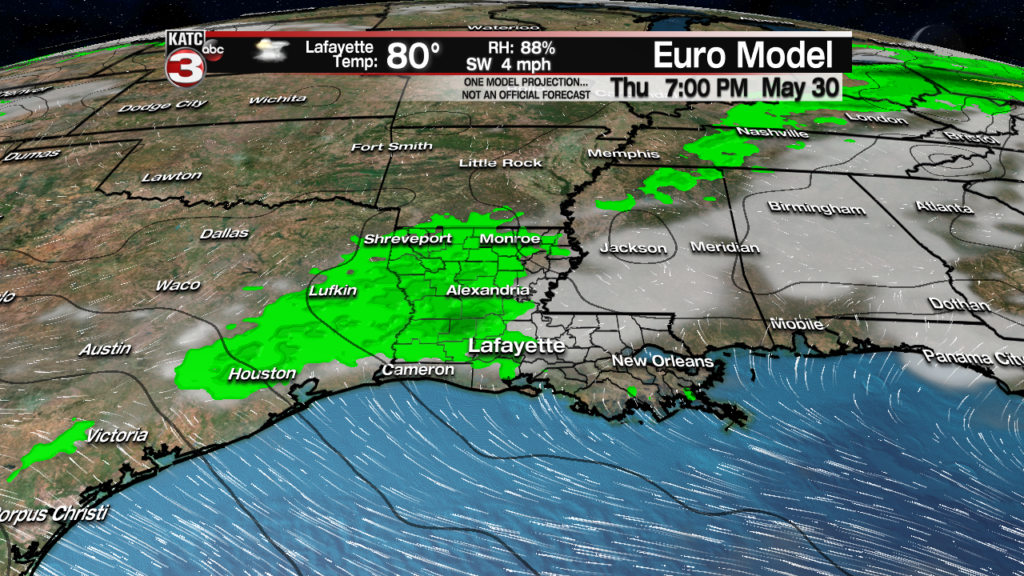 Temperatures this period will top out closer to the upper 80s to near 90.

The ridge of high pressure may get reestablished by next weekend, allowing for hotter temperatures, and with dew points pushing closer to the mid-70s are heat indices may start to break 100 by then.

Meanwhile in the days ahead, while there is no new information regarding the local river situation, we’ll be watching the Mississippi River levels at the Red River Landing moving forward as this will dictate how much water will be getting into the Atchafalaya. 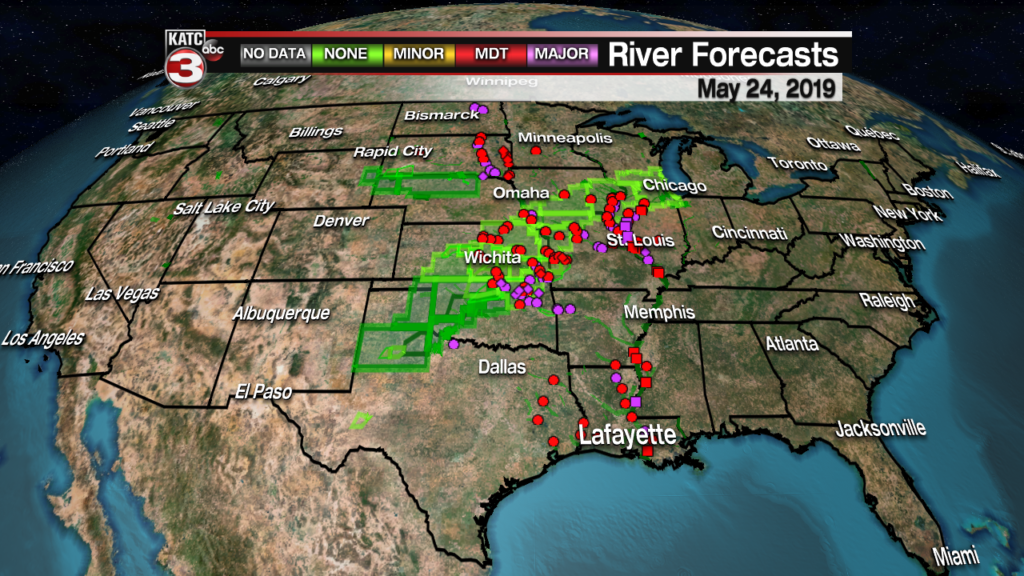 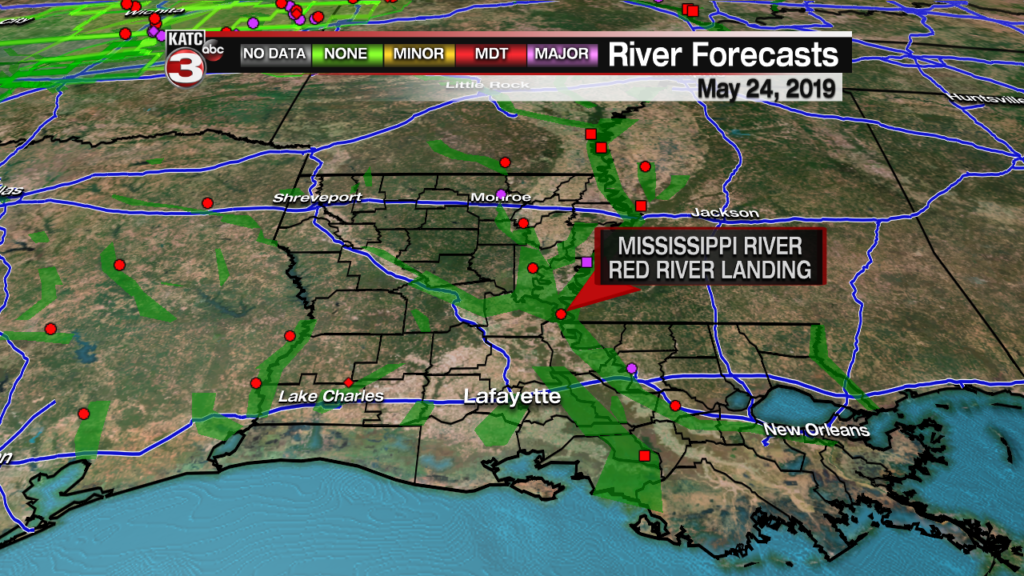 Currently the river forecasts do not reflect the water expected to flow down the river from the Central US over the next 10 days, but the forecast will likely change from the graphic indicated below. 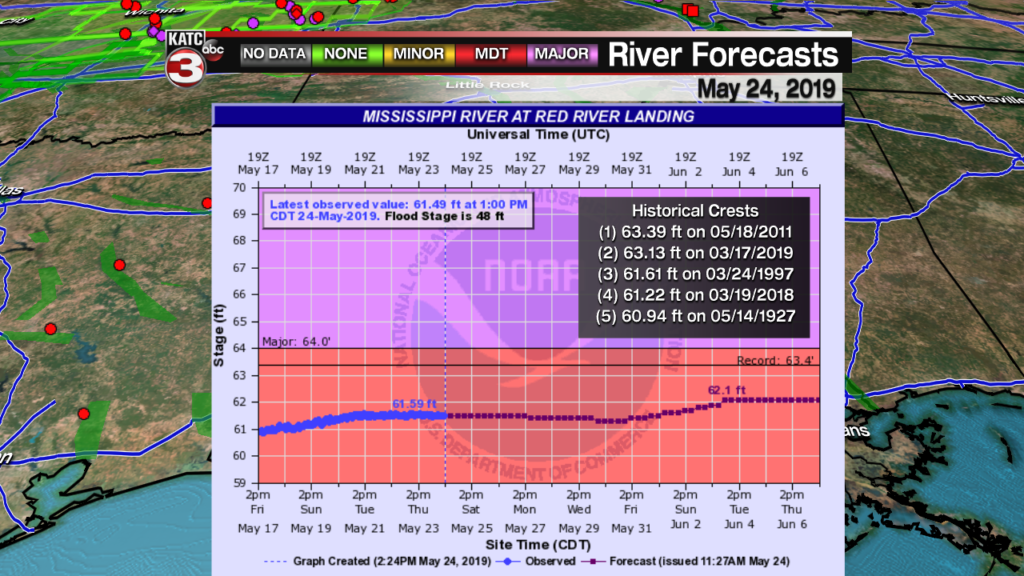 Farther south fortunately, the high water in the Stephensville area in Lower Saint Martin Parish has dropped a few inches, primarily because the breezy southeasterly winds over the last several days have diminished allowing the water to drain more readily into the Gulf of Mexico. 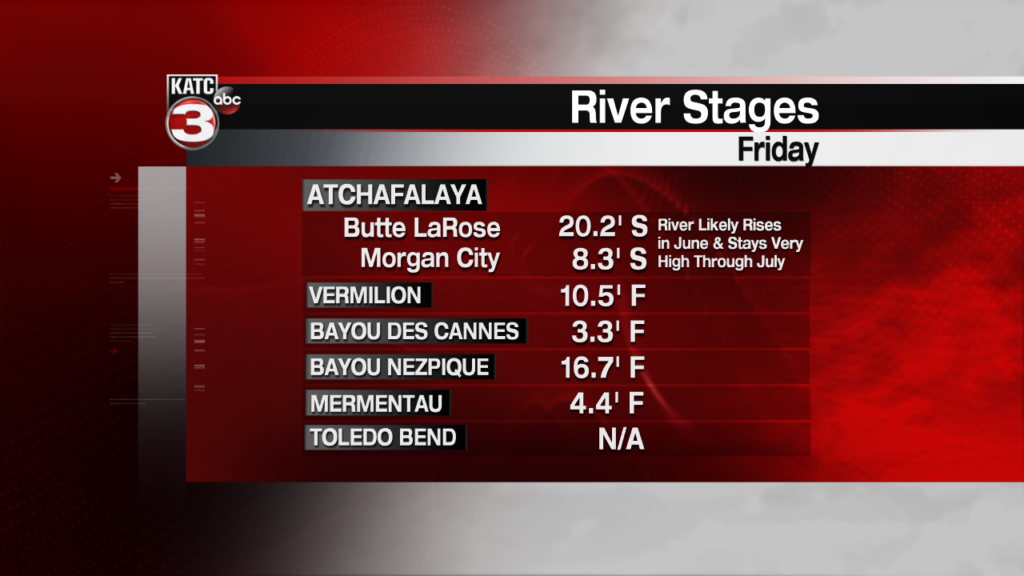 Water levels here and many other locations are expected to remain quite high into July.

You can get the latest river stages on the Acadiana Sportsman page.