Nice finish to week; chance of storms back this weekend

Acadiana will get to enjoy another nice day with fair to partly cloudy and warm conditions expected for our Friday, but unfortunately the chance of showers and storms will be increasing deeper into the weekend. 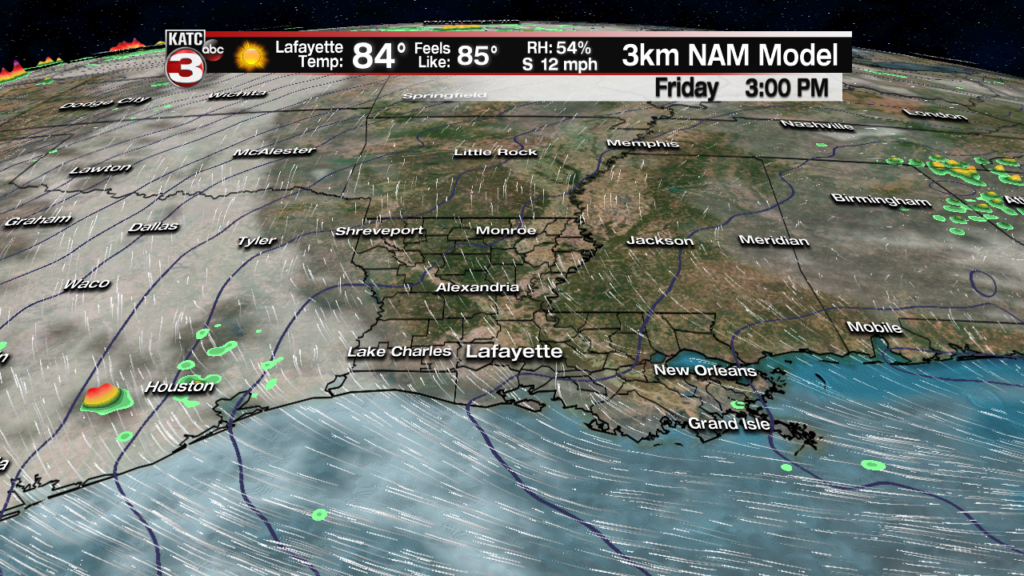 Look for fair to partly cloudy skies Friday with a morning start closer to the upper 60s followed by afternoon highs topping out in the upper 80s. 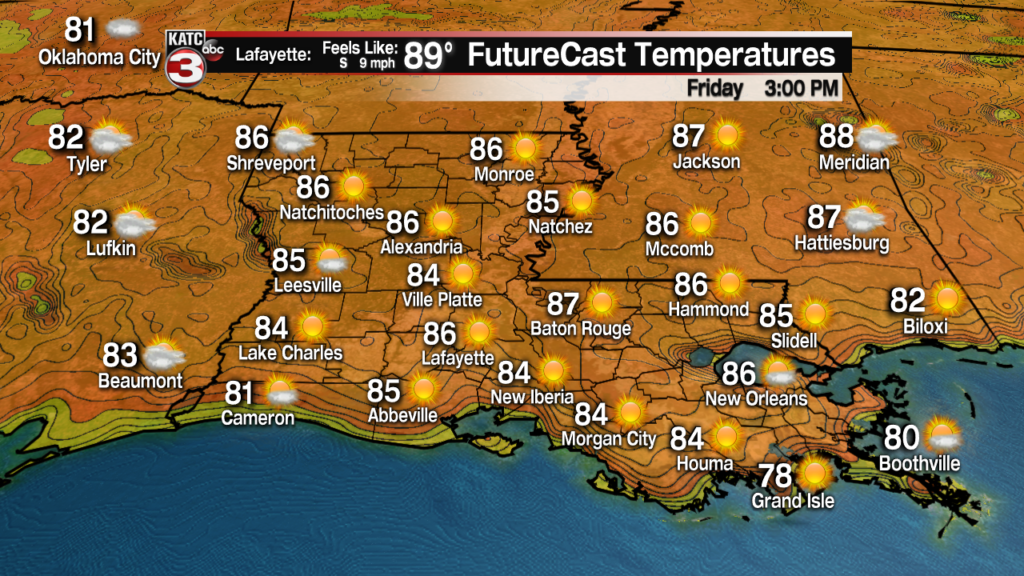 A nice southeasterly breeze Friday will take the edge off of the heat (and the increasing humidity).

A series of storm systems moving into Texas and eventually the Plains States will keep a good chance of storms, and enhanced risk of severe weather for the region back into Texas Saturday. 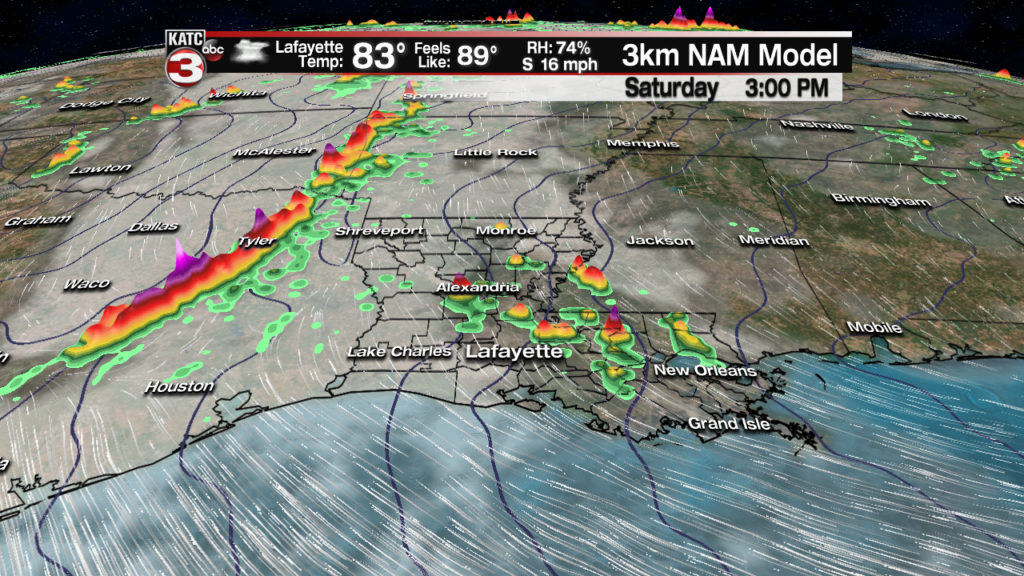 But some of these storms may try to make a run for Southwest/Western Louisiana Saturday evening/early night, but the activity will be moving away from upper support, so any activity, if it reaches portions of Louisiana, will be weakening. 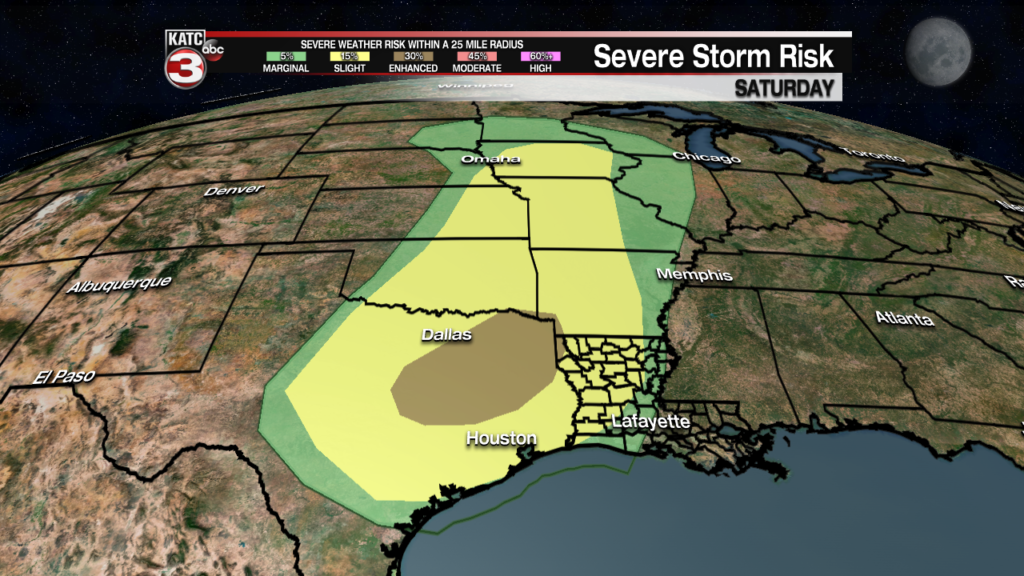 Nonetheless, the Storm Prediction Center (SPC) has the western and northwestern portions of Acadiana in a “marginal” to “slight” risk of severe storms with wind damage the primary risk. 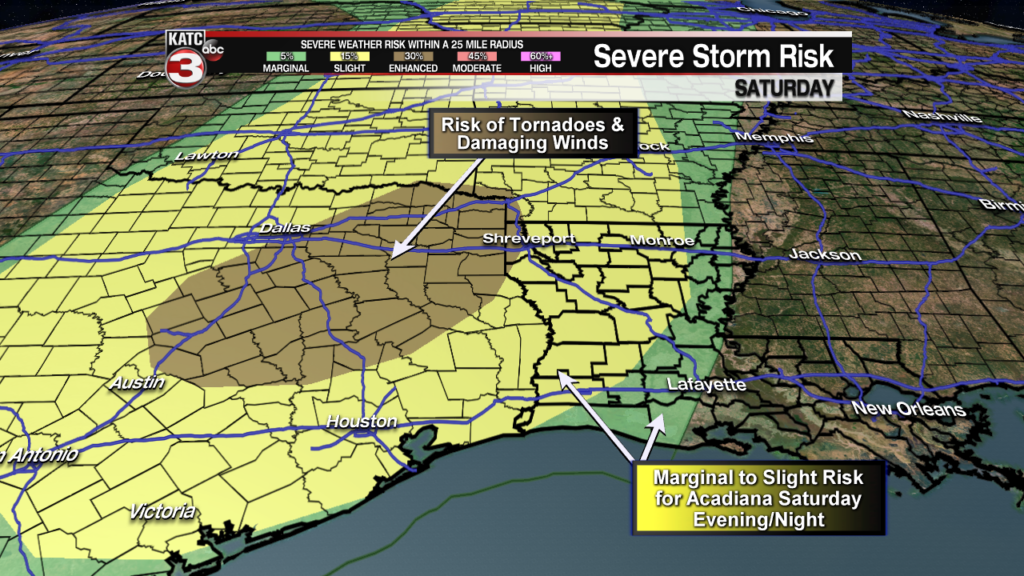 Locally expect about a 30% chance of scattered showers, possibly a short-lived thunderstorm, during the day Saturday, with rain chances briefly increasing to 40-50% (especially for northwest sections of the area) Saturday evening. 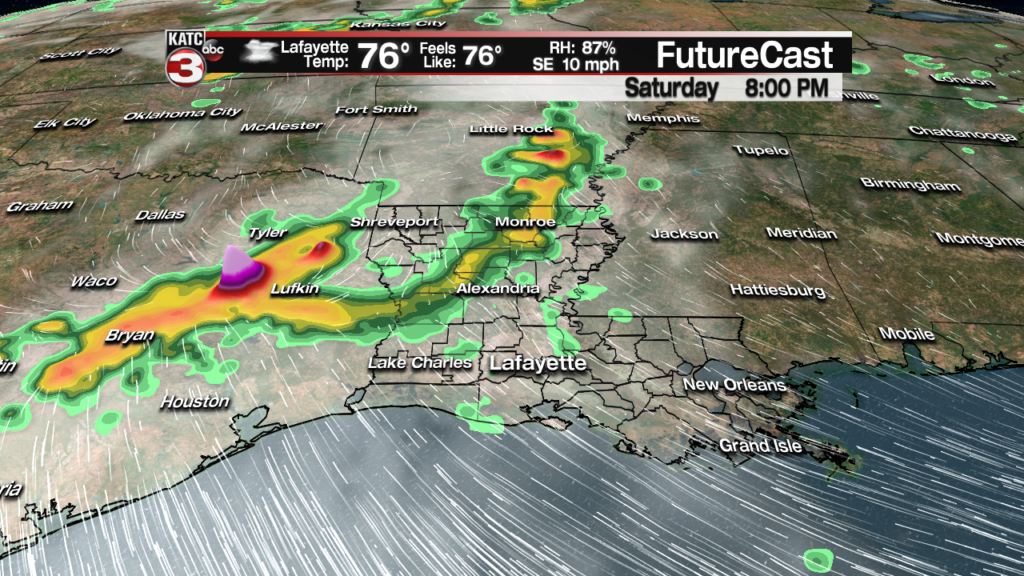 Moving into Sunday, there a should be a pretty good chance (70%) of scattered showers and storms as a weakening upper impulse and surface trough work their way into Louisiana. 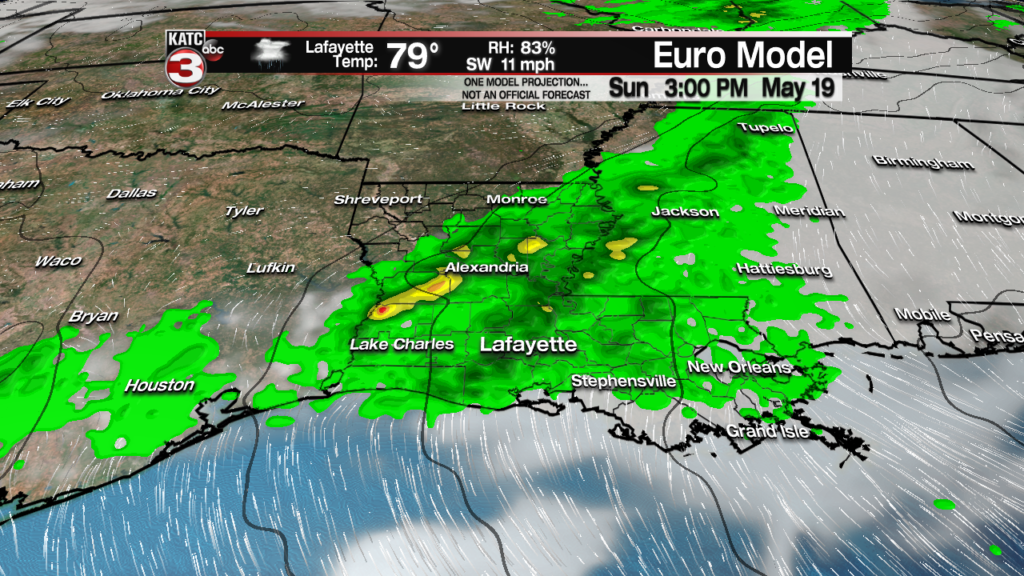 Widespread organized severe storms are not expected Sunday, and the SPC does not have Acadiana hatched in for a severe weather threat at this time, but one or two strong storms may be possible, and ultimately we may get hatched in for a marginal risk of a couple of severe storms that could produce isolated pockets of wind damage.

Rainfall at this time should not be an issue Sunday, with generally a third to an inch of rain expected…anything more could become a little more problematic as our grounds remain saturated from the rain last week, but this is not expected at this time. 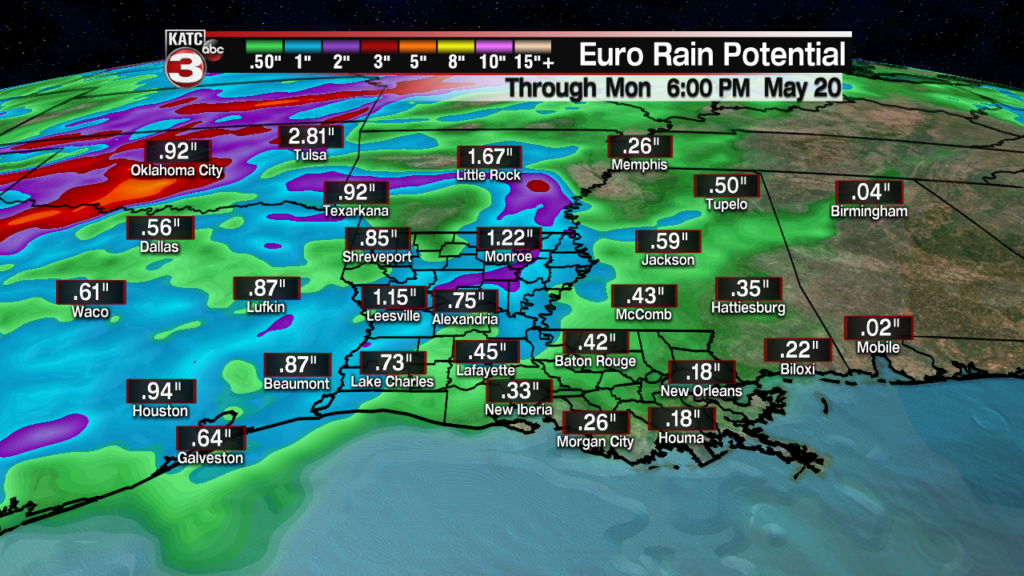 Moving into next week, the pattern will remain active with daily severe weather threats from the Plains to the Midwest but locally for Acadiana, it just means breezy, warm and humid conditions will continue locally with minimal to no chance of rain after Monday. 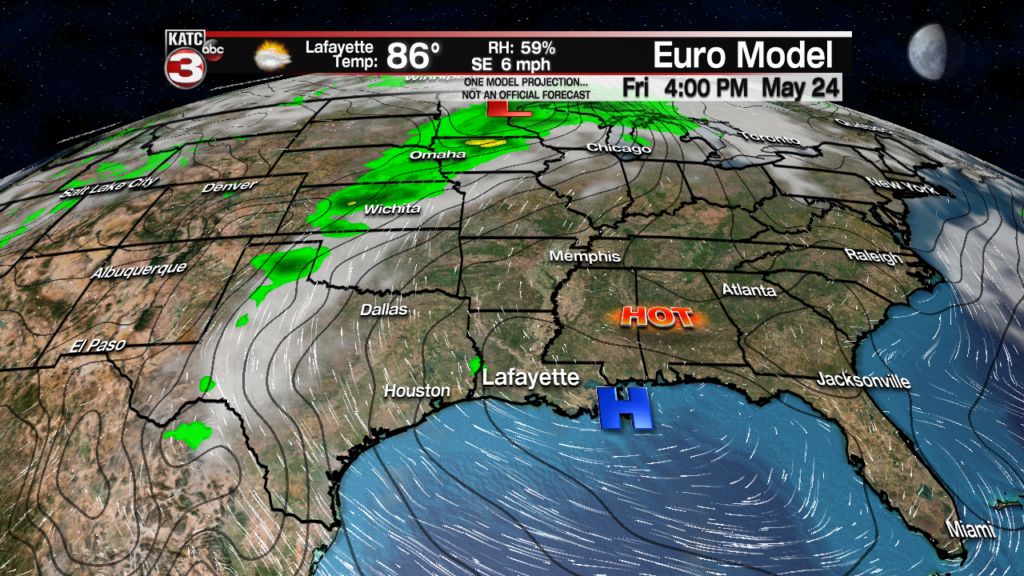 Meanwhile the Central US to the Northern Plains will get hammered not only by the daily severe weather threats, but also very heavy rainfall falling into the Missouri and Upper Mississippi Basin, and to a lesser degree the Red River…which will all but insure high water levels along the Mississippi and Atchafalaya to stay high through June…at this time however, water levels are not expected to exceed current high water readings…but stayed tuned. 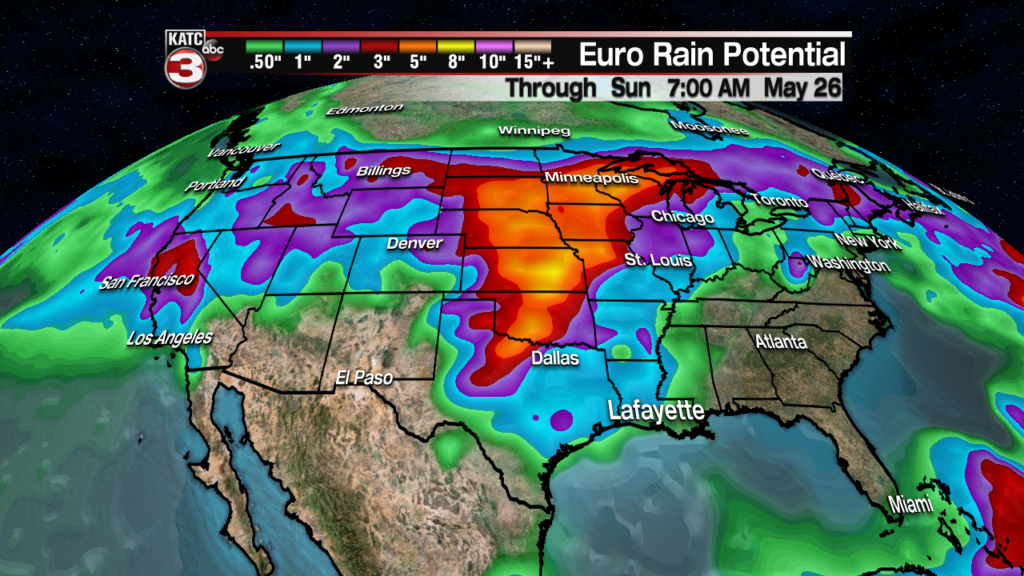 Looking farther down the road for Acadiana later next week and into the following weekend, it appears that a fairly strong and hot high pressure ridge that will build over the Southeast U.S. will edge westward toward our area.

This means we will likely see daytime highs approaching the lower 90s from mid-week into the following weekend…summer is knocking on the door! See the 10 Day Forecast for the latest.