The heavy rain and thunderstorms that covered much of Acadiana this morning is now moving east. Most of Acadiana will be left with cloudy skies with occasional light rain. Some stormy weather will redevelop over southeast Texas, but much of that may slide over the Gulf of Mexico. If any additional storms move into Acadiana, the most likely area to see those will be the coastal parishes. 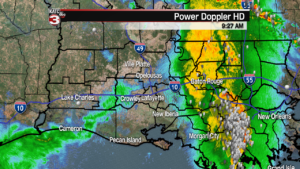 Rainfall is expected to pick up again on Saturday. Another wave will bring lines of storms with heavy downpours possible. Because of the already saturated grounds over the area, rainfall amounts as low as an inch or two could still cause significant runoff that could lead to flooding. It won’t take much.

Into Sunday, we can still expect a few areas of rain during the morning, but  hopefully Moms will be able to see some sunshine for Mother’s Day during the afternoon!