Acadia Parish Superintendent Scott Richard says that a parish school bus and another vehicle were involved in a crash on Ridge and Lagneaux Roads in Lafayette Parish Thursday morning. 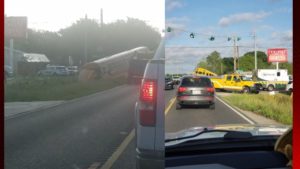 Drivers near the scene say that the bus and another vehicle went into the ditch directly in front of the Family Dollar on Ridge Rd.

Richard says that no children were on the bus at the time of the incident. The bus driver and bus attendant are being evaluated for injuries.

The bus involved was part of a special education transportation program that brings Acadia Parish students to Lafayette Parish Schools, according to Richard. He says that the bus is Bus #7.

The Lafayette Parish Sheriff’s Office and emergency crews were on scene. One lane of the roadway was blocked as crews worked to clear the vehicles.