Around 1:00 am Tuesday morning Crowley Police responded to shots fired on the 500 block of Ross Avenue.

Officer’s found a teen suffering from a gunshot wound and the victims truck in a ditch.

Yola Handy identified the victim as her son.  She says 16-year-old Wesley Yokum Jr. left his grandmother’s house on 7th Street to go back to her house on A Avenue. 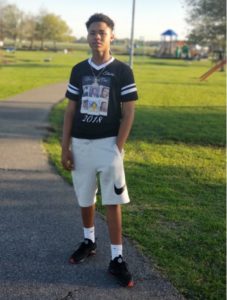 Handy says that her son asked his friends to give him a ride back home and within minutes after leaving his grandmother’s, the four teenagers heard gunshots.  The driver of the vehicle then lost control and crashed into the ditch.

“I heard a shot, and it felt like someone had punched me, I knew I was shot,” Handy said her son told her.  She then says the boys fled the vehicle and ran from the scene.

Wesley told his mom that all of them were confused about what had happened. “They were all confused,” Handy said. “It was dark they didn’t know if someone was walking and shot, or someone drove by.”

Handy met her son at the scene before he was airlifted to Lafayette General.

The bullet struck Wesley in his lower back, “Not far from his spine,” his grandmother Linda Jones says.

“This is always happening.  We always hear gunshots,” Jones said. “They need to do something.”

For Handy and her mother, the news that Wesley had been shot was painful. “I thank God for sparing him,” Handy added.

Crowley Police Chief Jimmy Broussard says the investigation is still ongoing and anyone with information is urged to call Crime Stoppers.