Every April a family puts out more than 50 pinwheels along Lake Arthur Avenue in Lake Arthur.
It marks Child Abuse Prevention Month…but each pinwheel has a bigger meaning.

“Each pinwheel planted represents a month Keaghyn isn’t with us. So every year we add 12 more.” Heather Cormier said.

The blue pinwheels and bows are a way the family can honor their toddler and bring awareness to the community. 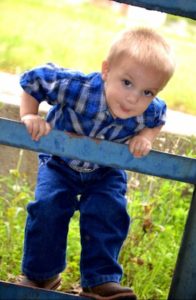 The Calcasieu Parish Coroner’s Office ruled Parsons’ death a homicide. His autopsy revealed a perforation in his small intestine that was caused by blunt force to the stomach.  An arrest was made. Five years later… no one has been convicted in connection with his death.

Keaghyn’s father’s fiance was indicted on a second-degree murder charge months after his death. She bonded out of jail in 2017.  The district attorney’s office says she hasn’t been to trial yet because she’s had multiple public defenders.  Her case is set for motions in June.

Heather Cormier, his aunt, said, “Five years too long with no justice too.”

His family describes Keaghyn as “full of energy…Loved being outside.  Everyone just fell in love with him.”

Cormier said their cries for help were ignored.

“These kids needs to be taken more seriously,” she said.

This Friday is #wearblueday. The goal is for everyone to wear blue and use the hashtag on social media.