Temperatures will be even colder today as high pressure builds in from the north. Very dry air will be in place today with temperatures only recovering into the mid to upper 50s. Breezes will continue out of the north at 10-15 mph making it feel even colder. At least there will be abundant sunshine, so while in a sunny area with the wind being blocked, it should feel comfortable. If you’re in the wind and in a shady spot, it will feel considerably colder! 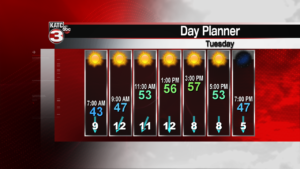 Clear skies are expected tonight. Winds are planned to calm down, which will lead to rapid cooling. Most areas will drop into the 30s overnight, with a few areas over the extreme northern sections dropping briefly to the freezing point. Frost may also be an issue, so tender plants should be covered or brought inside. More sunshine is expected Wednesday with highs in the mid 50s. Lows early Thursday will be in the 30s again with patchy frost.

The next storm system is expected toward the end of the week. As it cranks up west of our area Thursday, winds will shift to the east, bringing slightly warmer temperatures and some cloudiness late in the day. Expect highs in the mid 60s. Friday will bring cloudy skies with showers developing by the afternoon with highs in the upper 60s. 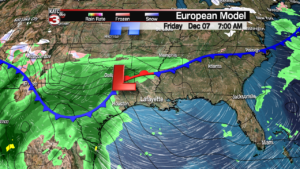 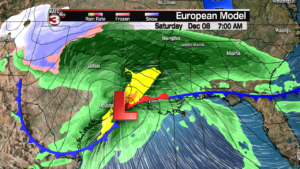 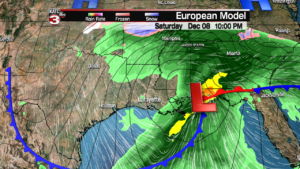 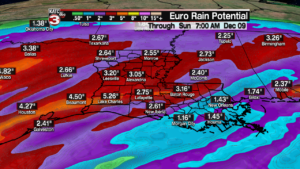 Low pressure will develop along a front and ride up the Texas Gulf coast. This will bring widespread rains, with a few heavy downpours Friday night through most of Saturday. At this time the severe weather threat looks to be limited, but a few strong storms can’t be ruled out. Rainfall amounts will be the main concern, where a good 2-4 inch soaker is expected, with a few locations exceeding five inches according to the latest models. Colder weather will return Sunday and early next week with a drying period.