A major focus of the Cattle Fest in Abbeville is 4-H and especially the 4-H livestock program.

“Here in Vermilion Parish, we’re about the third largest cattle producing parish in the state. We have about 600 producers, and here locally it generates $18 – $20 million dollars to our local economy,” explained Vermilion 4-H County Agent Hilton Waits.

Abbeville cattle farmer Chad Lege participated in 4-H growing up and his two daughters are carrying on the tradition.

“It teaches them that they gotta get up in the morning. Feed their animals. They gotta see about them. Make sure they have feed and water. Teach them everyday responsibilities,” said Lege.

The Lege family has been raising Gray Brahman heifers to show at the 4H livestock programs. 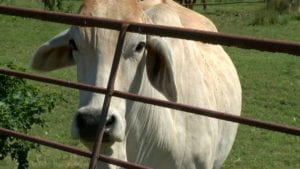 “Your Brahman cattle they go from extremes. Some of them are pretty wild, some of them are pretty gentle. You hit the gentle ones, they’re very gentle. They’re mainly for their heat and insect tolerance. In our area, probably 90 percent of our area has crossed cross and crossed-up with the Brahman cross. You know we have a lot of heat and a lot of insects in this area. They’re able to tolerate more heat and insects,” explained Lege.

The family’s one and a half-year-old Brahman heifer, Primrose, is very gentle.

Showmanship is determined on how well she can be lead through a series of maneuvers and patterns inside the ring.

The livestock show begins at 8:00 am on Saturday. It’s being held at the LA Extension Service Building on West Port Street in Abbeville.