The chance of scattered showers and thunderstorms will be on the rise Friday into the weekend, with little change in the pattern anticipated for much of next week.

Per FutureCast, the onset of scattered storm Friday will be primarily during the afternoon hours with rain chances tentatively set near 50%. 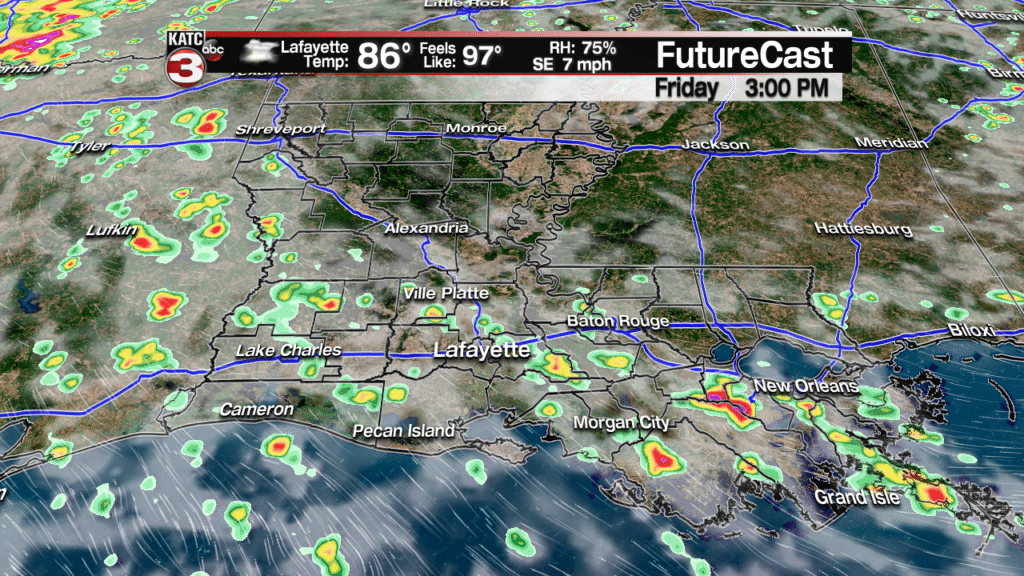 This weekend promises more of the same with rain chances closer to 60% along with perhaps an early onset to the storms from mid-morning on.

Activity each and every day should quiet down at night, but there will be some activity that persists several hours past sunset.

Daytime highs will be closer to 90 Friday and mostly in the upper 80s thanks to the good chance of showers and thunderstorms.

Little change in the pattern is foreseen into next week with a nearly stationary frontal boundary to our northwest being the focus for heavy rains from Texas into Oklahoma, but locally activity will stay in the ‘scattered” category for Acadiana.

Therefore, no major flooding and/or severe weather is anticipated locally.

But with an active thunderstorm pattern, a few storms could locally produce gusty winds, brief torrential downpours and frequent cloud to ground lightning on any given day…in other words, typical summer storms for the area.

Farther down the road into the latter part of next week and into the following weekend, the long range models remain split on whether there will be enough atmospheric emphasis to drive frontal boundaries through the area.

While the European Model offering no significant frontal boundaries to reach area, the American GFS Model is offering a series of fronts approaching the region down the road…but the Euro trend may be followed by future GFS model runs. 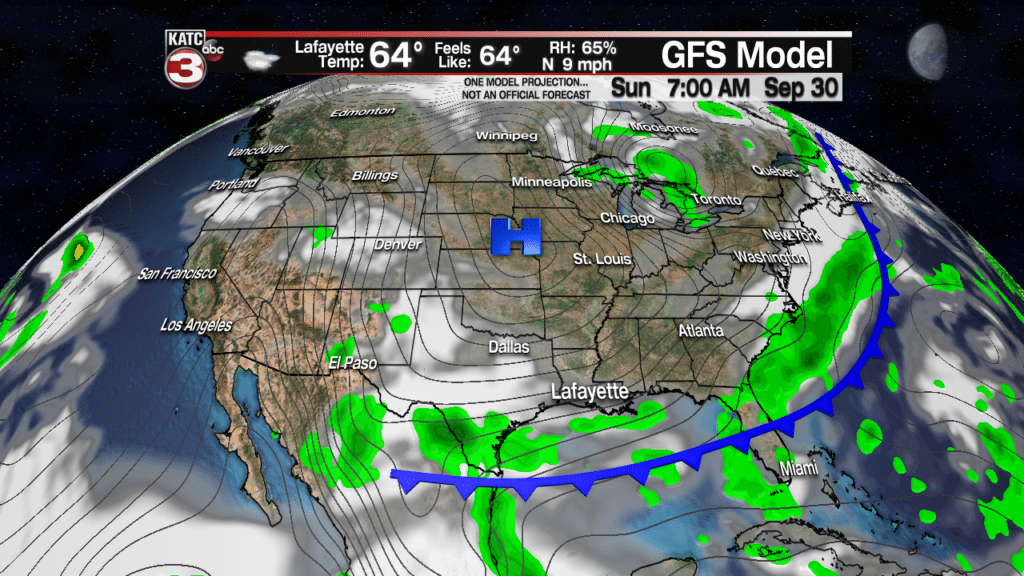 The bottom line for now, we’re playing somewhat closer to the vest, but there should still be some cooler, or not as hot weather, for Acadiana toward next weekend, but any fronts may stall just south of the region so clouds, and some rain chances may stay…we’ll see.

The long range European Model shows no such significant cool fronts nor strong ridges of high pressure advancing toward the Gulf:

Meanwhile in the tropics, while for the most part there are not any suspect areas threatening the Gulf of Mexico, The National Hurricane Center(NHC) is tracking several disturbances. 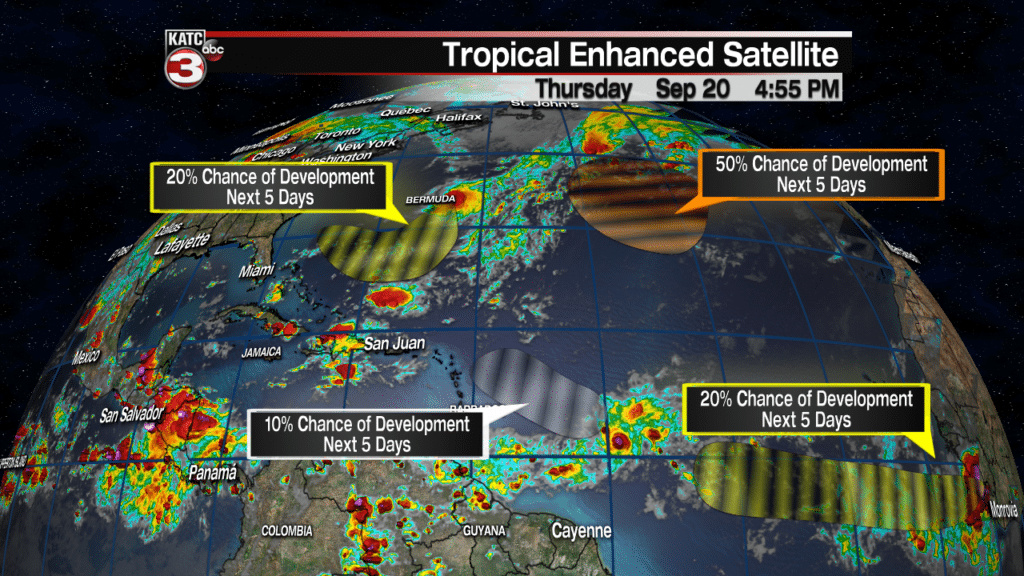 One such disturbance, an upper low in the Northern/Northeastern Atlantic, has a 50% chance of developing over the next 5 days, however this will not be a threat to our part of the Atlantic.

Meanwhile farther west, a mid-level disturbance near Bermuda, which could be attributed to parts of the former Florence, has a 20% chance of development as this system drifts south and then westward. Although the risk of development of this system may increase in the days ahead, this shouldn’t be a threat to the Gulf as well.

Farther south, the disturbance that is east of the Windward/Leeward Islands, shows less promise for development, at 10% over the next 5 days per the NHC.

Then farther to the east, near Africa, one or more waves may develop off the coast over the next 5 days, with NHC chances of development set at 20% as of Thursday afternoon.

There continue to be signs that the tropics may come alive again into the first week of October, particularly over portions of the Caribbean westward into the Eastern Pacific. 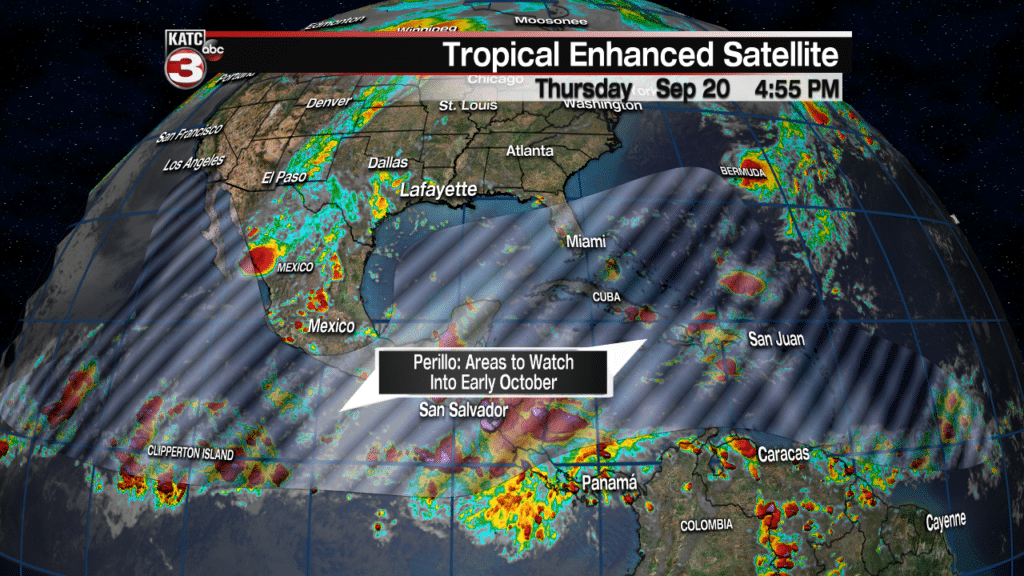 Prime-time for the tropical activity and development climatologically-speaking continues through the first couple of weeks of October. 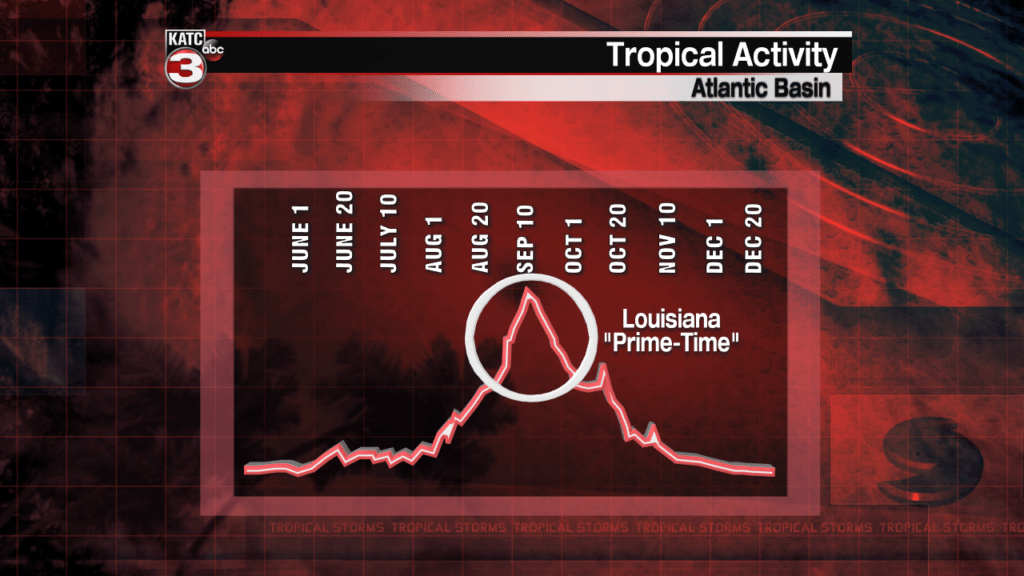