It will be a hot last full weekend of summer for Acadiana with temperatures reaching the lower 90s accompanied by heat indices topping out near 105. 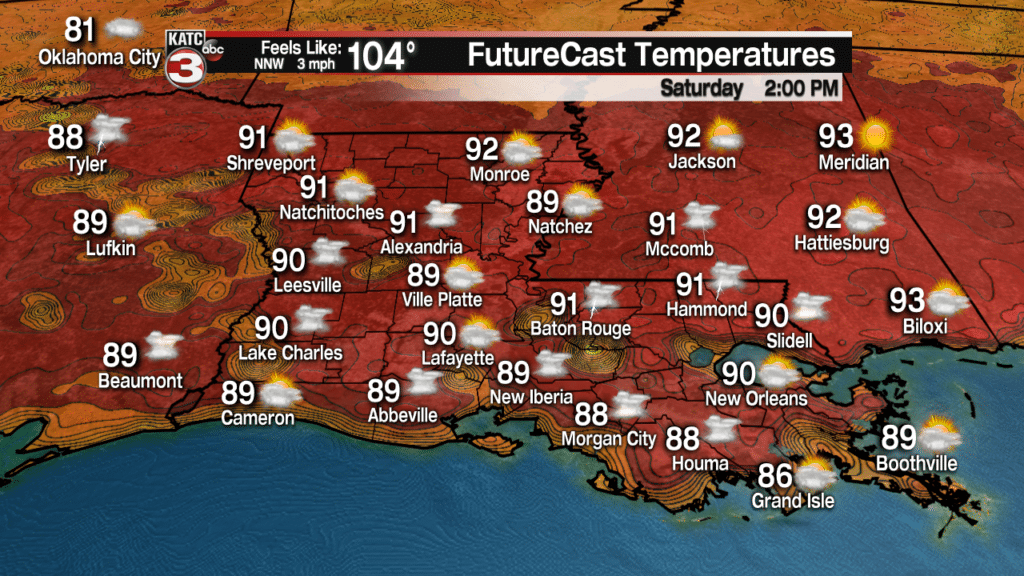 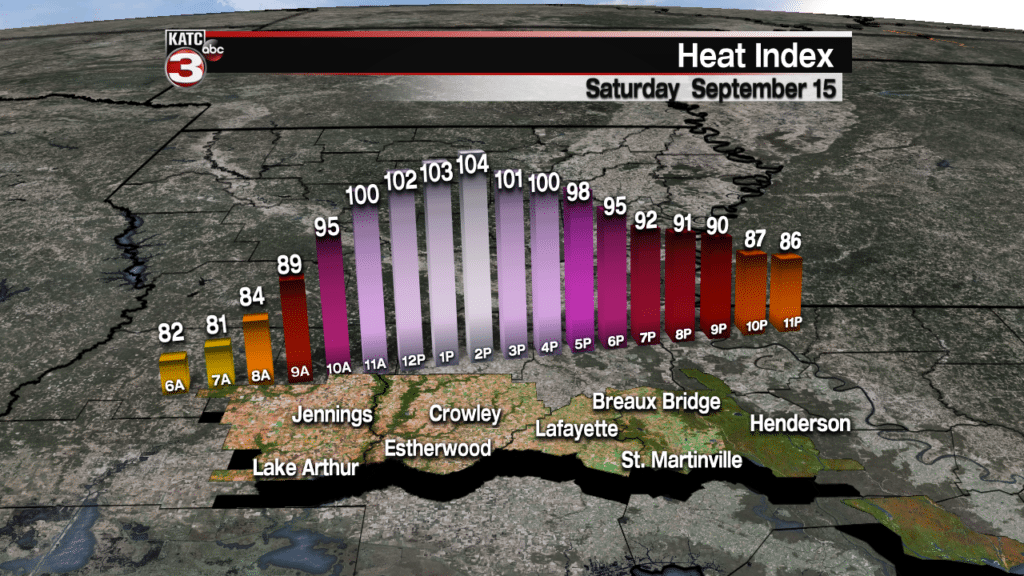 Slightly more stable air moved into the region Friday, and it should stay most of the day Saturday with partly sunny skies for a good portion of the day.

By the way, the temperature topped out at 94F in Lafayette and New Iberia Friday, tying the record in New Iberia, but not threatening one in Lafayette.

There will be the risk of scattered late afternoon/early evening showers and thunderstorms for our Saturday. 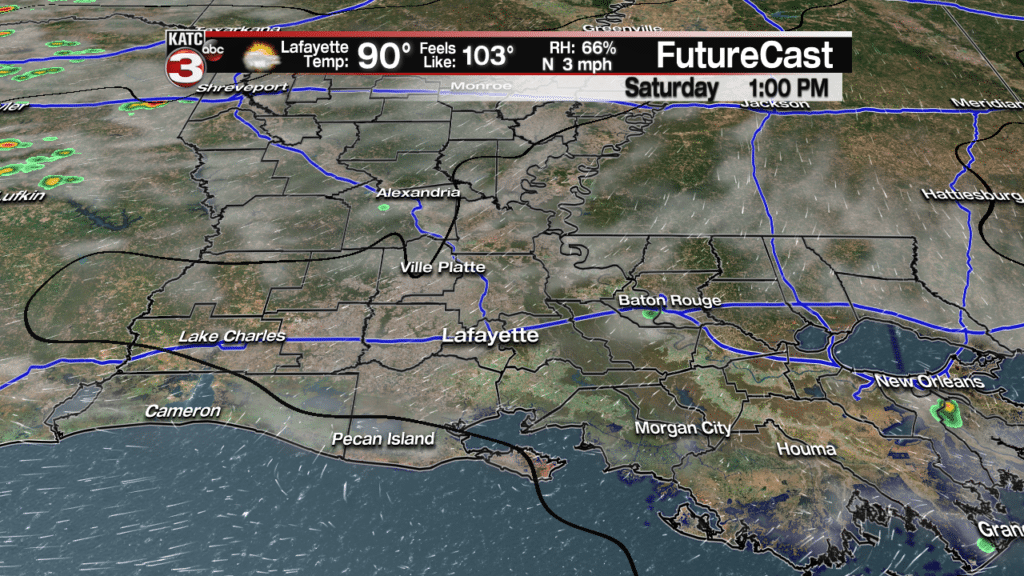 Rain Chances Saturday will be near 40% late. 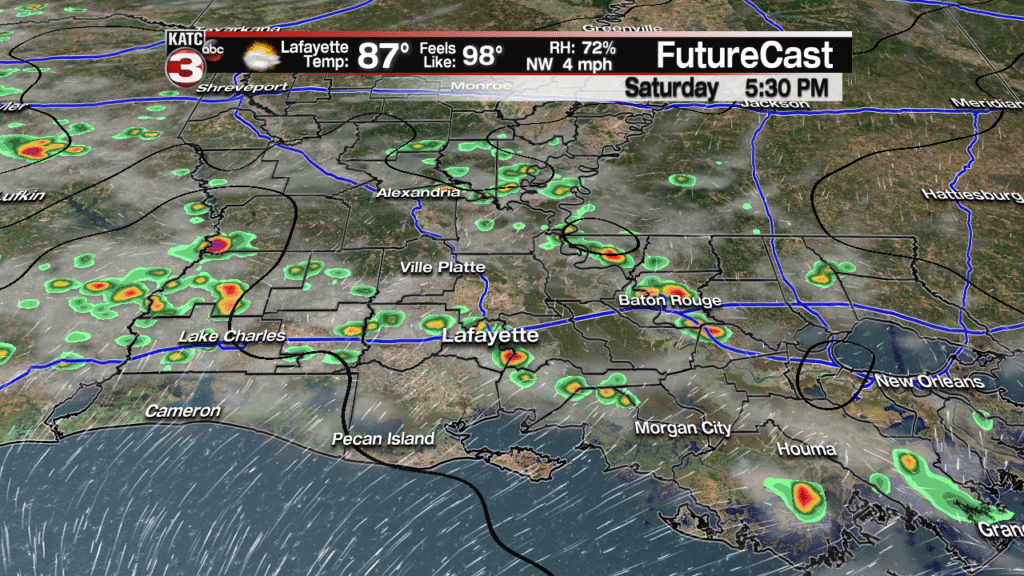 The same could be said for Sunday, although there should be more clouds and an earlier onset for the chance of scattered showers and storms.

The pattern will remain summer-like through much of next week, but moisture will begin to pool across the Gulf Coast and Gulf of Mexico (see discussion below) late in the week and into the following weekend allowing for a better chance of storms to return to the area.

Meanwhile, in the tropics, Florence was downgraded to a tropical storm Friday afternoon, but the system will continue to produce a damaging storm surge and catastrophic flooding as it slowly meanders through the Carolinas this weekend. 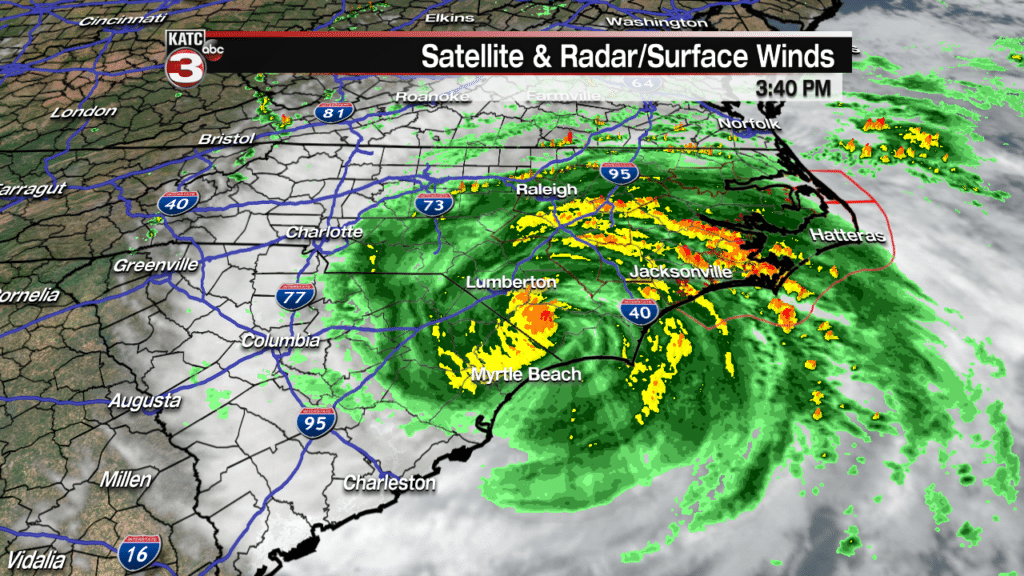 Florence has already produced more than 20″ of rain in spots and has been responsible for a battering storm surge in excess of 10 feet along the North Carolina coastline and low lying areas. 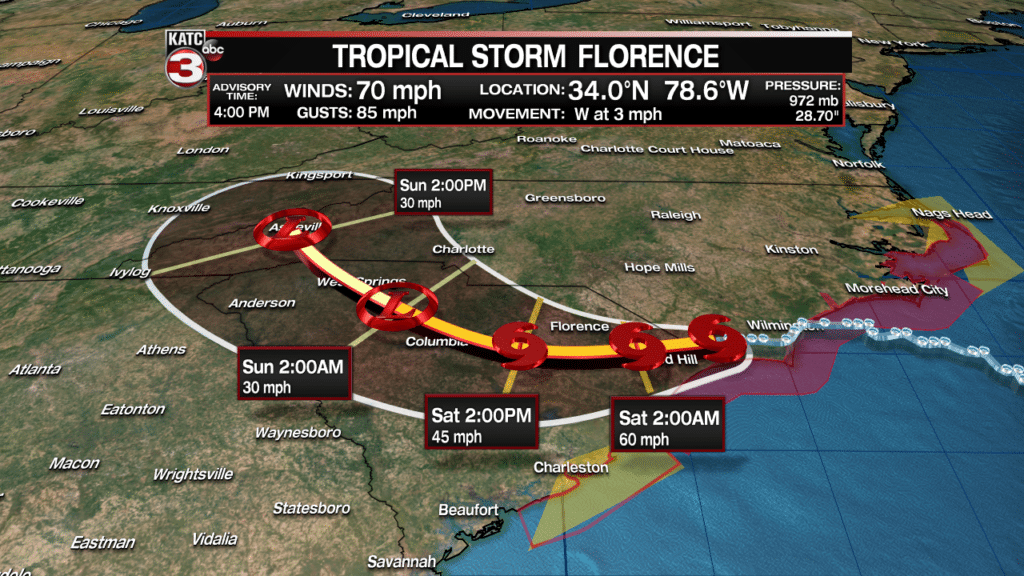 An additional 1-2 feet of rain from Florence may be possible in spots from North to South Carolina through the weekend. 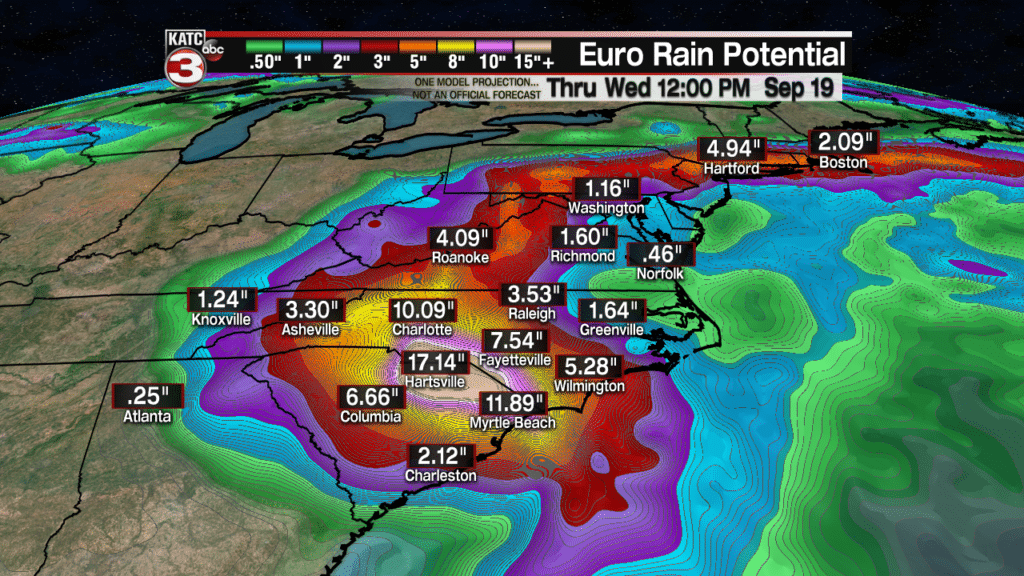 Farther out in the Eastern Atlantic, Joyce and Helene remain tropical storms and are no concern to our part of the world. 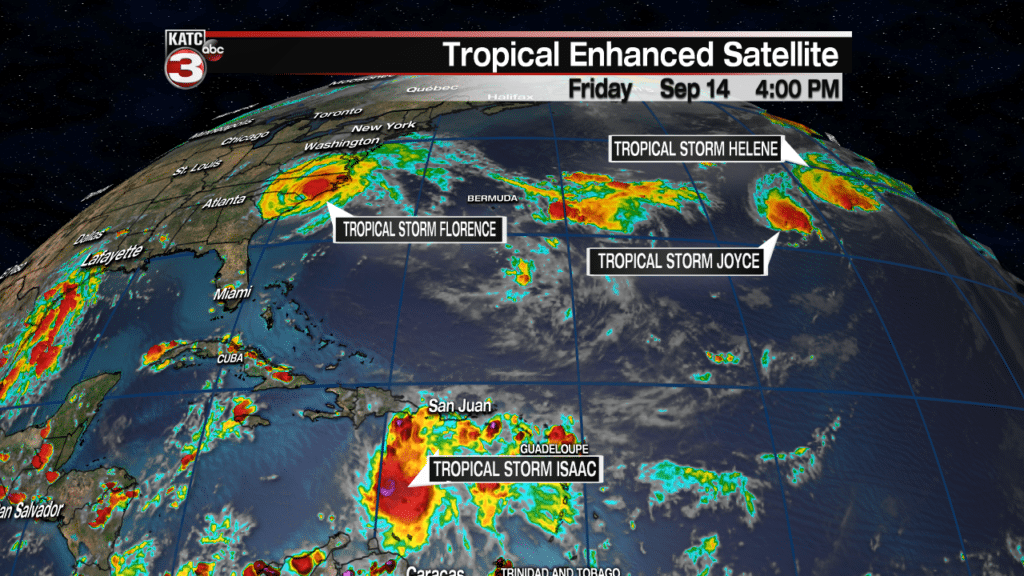 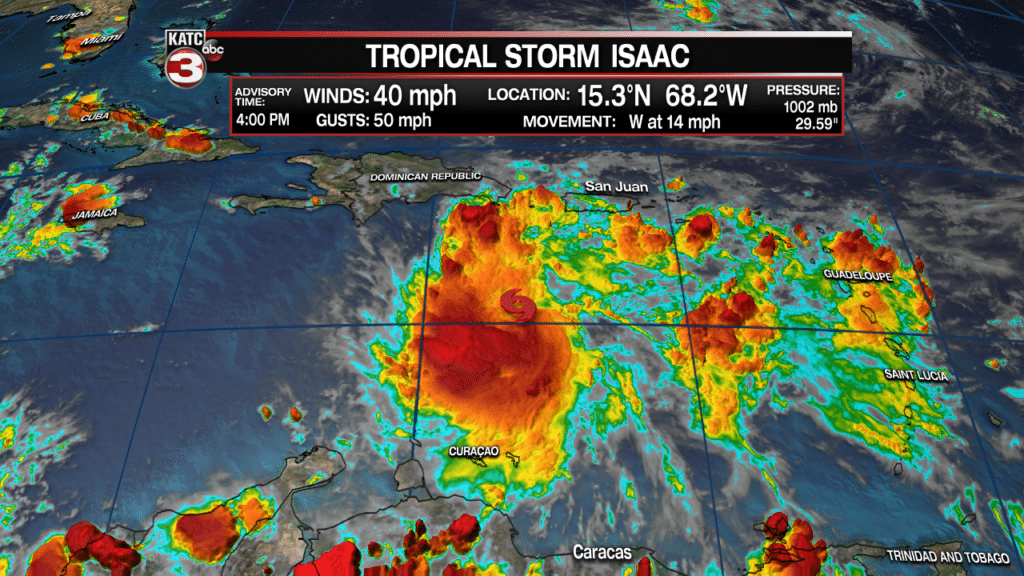 Isaac may hold on as a tropical storm through Saturday but should weaken again to a depression, perhaps a tropical wave, by the end of the weekend or early next week. 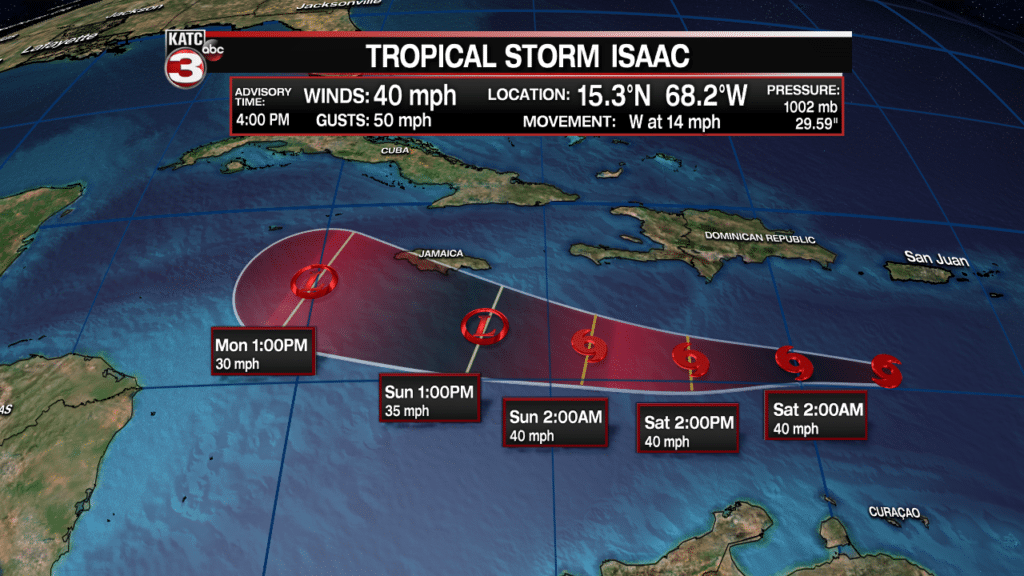 The moisture from this remnant system may eventually head of the Gulf of Mexico mid- to late next week, but at this time, re-generation to an organized tropical system is not anticipated, but as always, even with tropical waves, vigilance will be required. 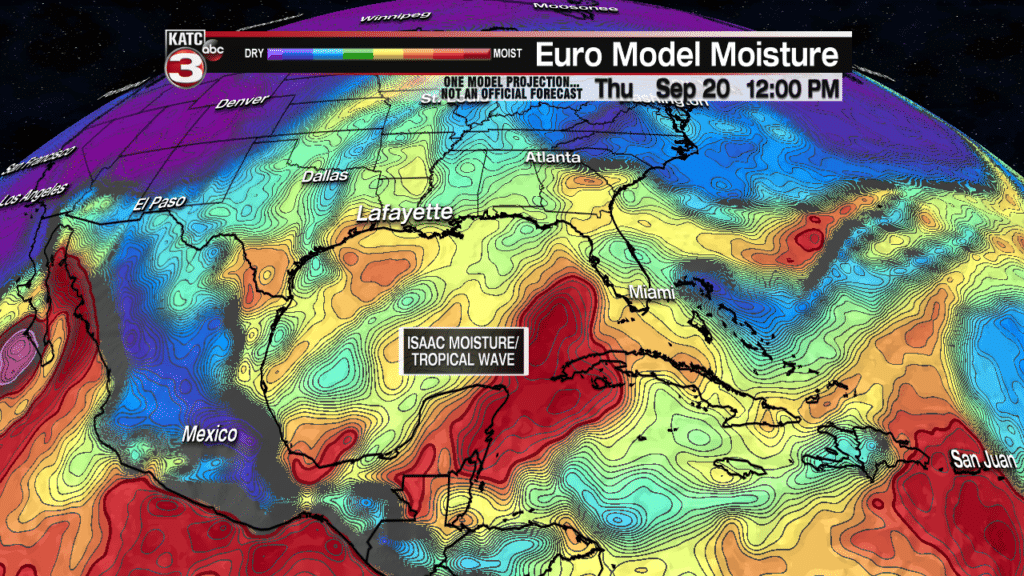 And it does get interesting toward the end of next week into the following weekend, as tropical moisture pools along the entire Gulf Coast and in the Gulf, possibly ahead of a cool front that may arrive in the 9-10 time-frame. 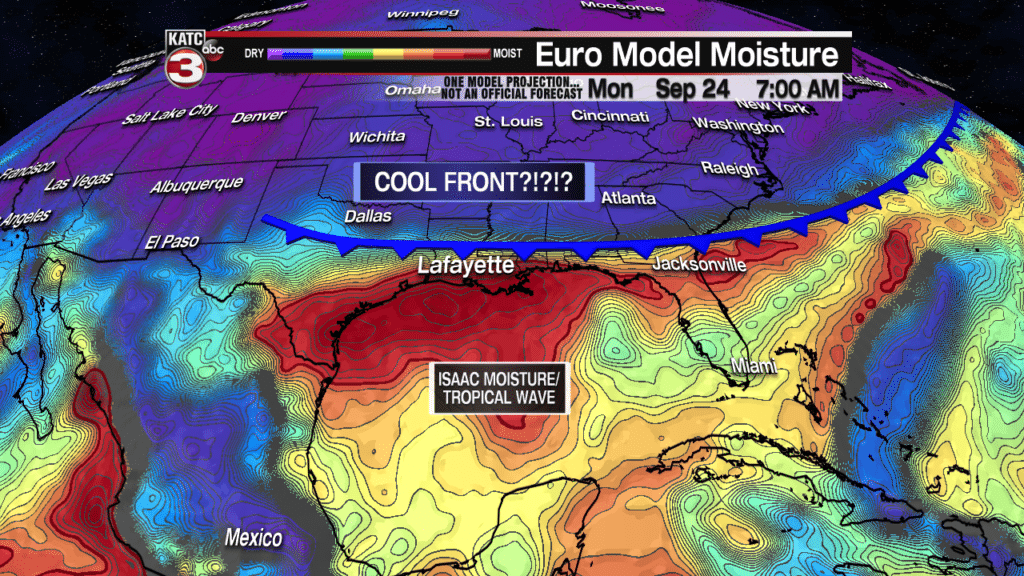 At this point it does look like we will see more storms next weekend versus this weekend, and hopefully cooler conditions to follow with our potential first fall cool front that might just be on the horizon just in time for the first days of fall.

Consult our latest 10 Day Forecast for the latest.