Coincidental with the peak of hurricane season, there are no less than 5 systems that the National Hurricane Center (NHC) was tracking Thursday afternoon, including Hurricane Florence, tropical storms Isaac and Helene, Sub-Tropical Storm Joyce, and a disturbance in the Western Gulf of Mexico. 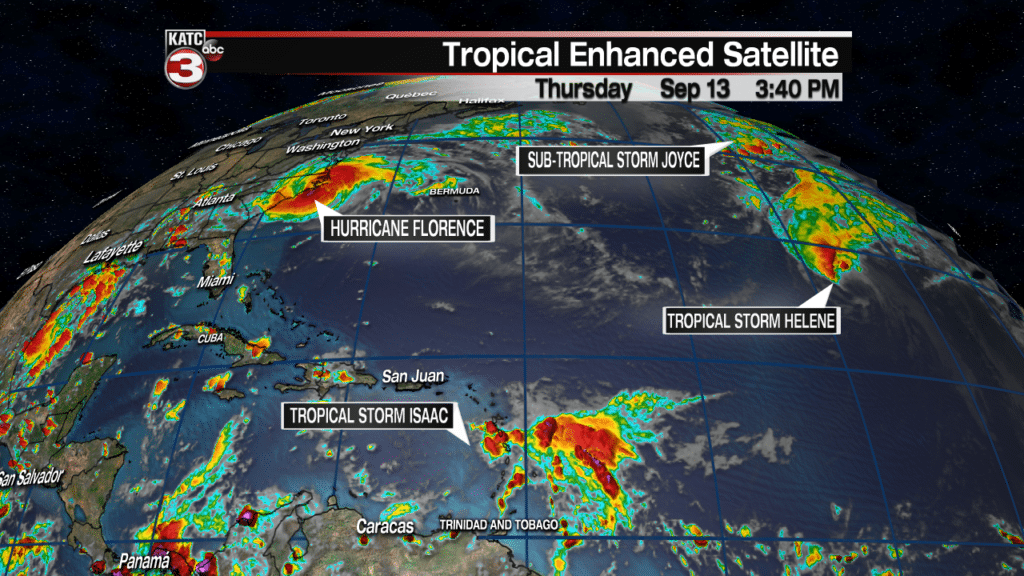 Of greatest local interest in the near term, is the area of disturbed weather in the Gulf of Mexico. 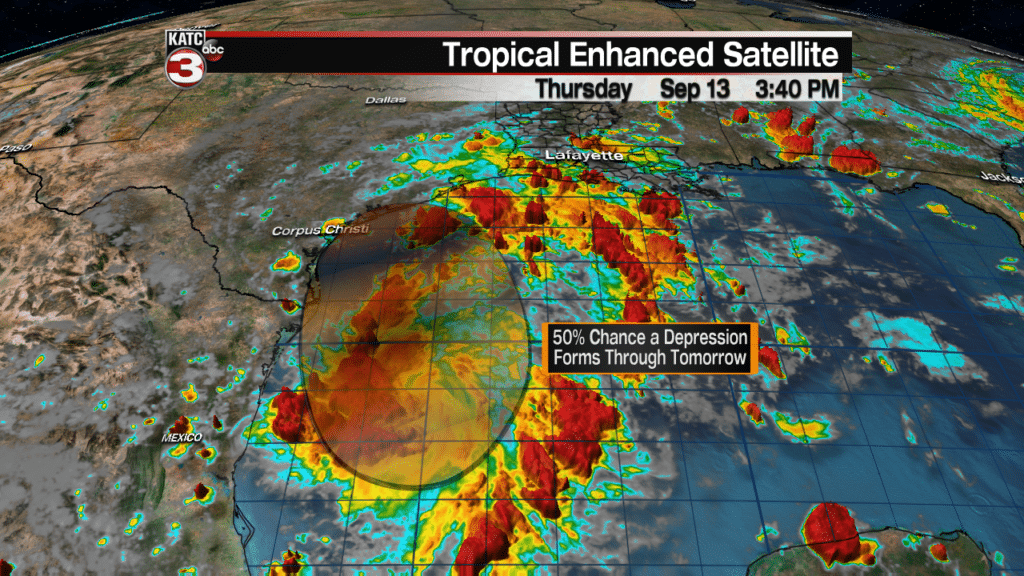 The disturbance was not showing a great deal of organization Thursday afternoon, but the NHC is still giving this system a 50/50 chance of becoming a tropical depression prior to the disturbance moving inland across portions of Texas and Mexico by early this weekend.

But like today for Acadiana, there will be some branches of tropical moisture advancing inland across Southern Louisiana over the next few days, especially during the afternoon hours.

Storms are not expected to be severe, but a few funnel clouds may be possible as activity initiates, with gusty winds up to 30-35 mph, brief torrential downpours and lightning possible in some of the storms.

Rain chances for Acadiana will be in the 40% range Friday and Saturday, and closer to 30% by Sunday.

Much of next week looks rather quiet, and quite hot for the time of the year, with partly cloudy skies, slight chances of a few afternoon storms, accompanied by highs in the lower 90s and lows in the steamy mid-70s.

Toward the end of next week into the following weekend it could potentially get a little more interesting with regard to Tropical Storm Isaac or the remnants thereof.

Isaac was barely holding on as a storm Thursday afternoon and is expected to eventually degenerate to a tropical depression or open tropical wave over the next few days while traveling mostly westward through the Caribbean Sea. 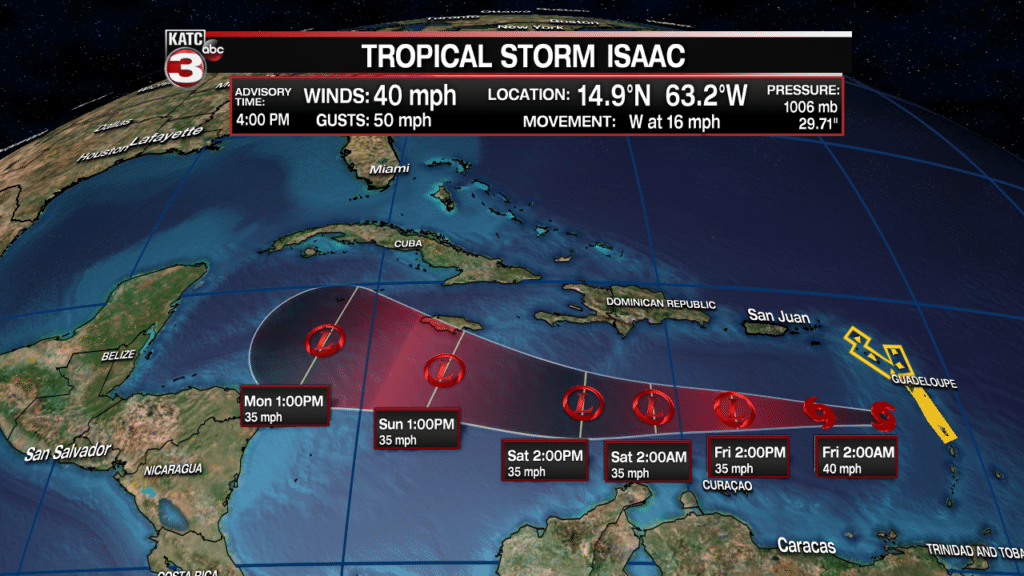 Thereafter, there are opportunities for the tropical moisture to head for either Central America/Mexico and/or the Gulf of Mexico in the 7 to 10 day time frame. 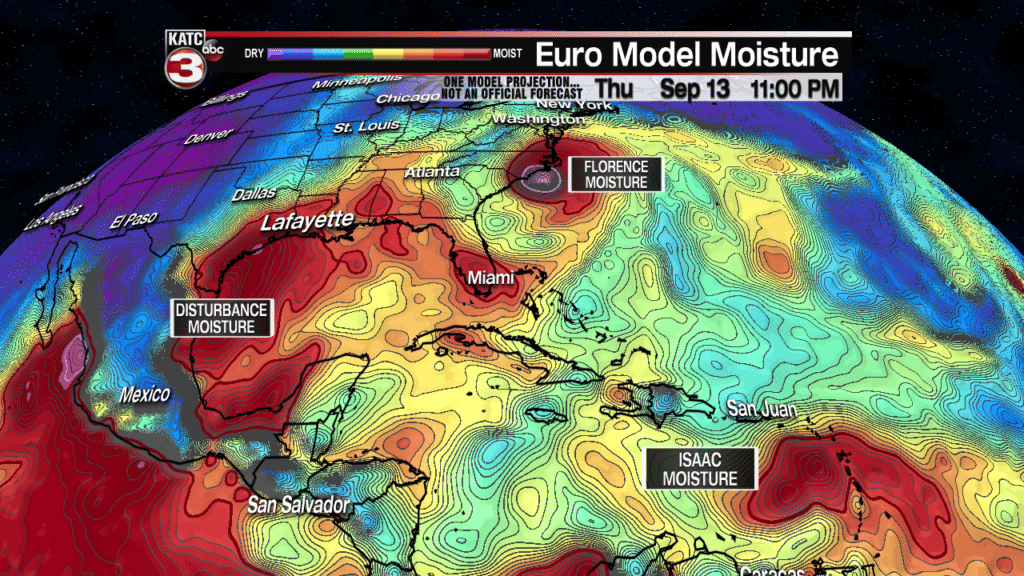 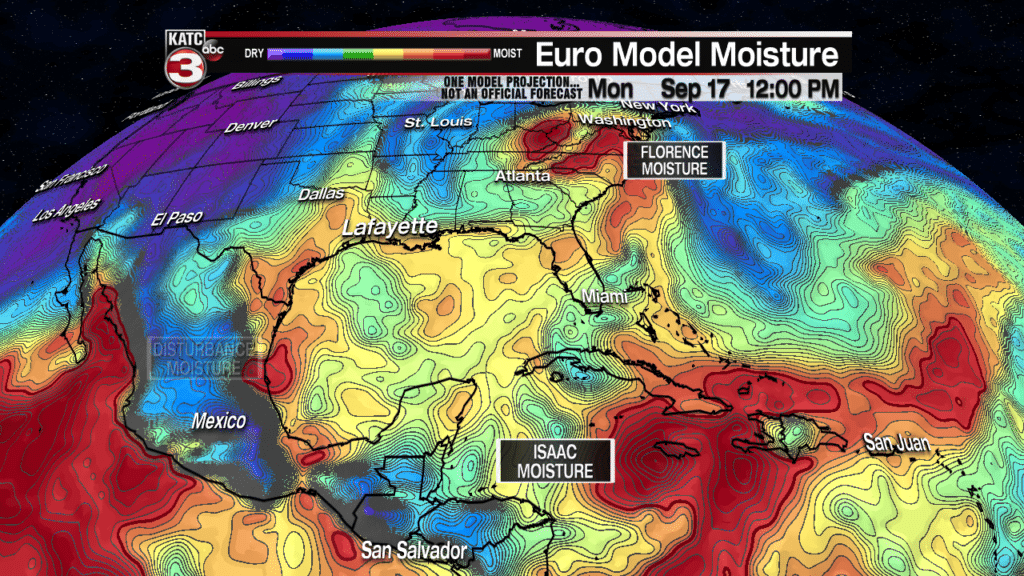 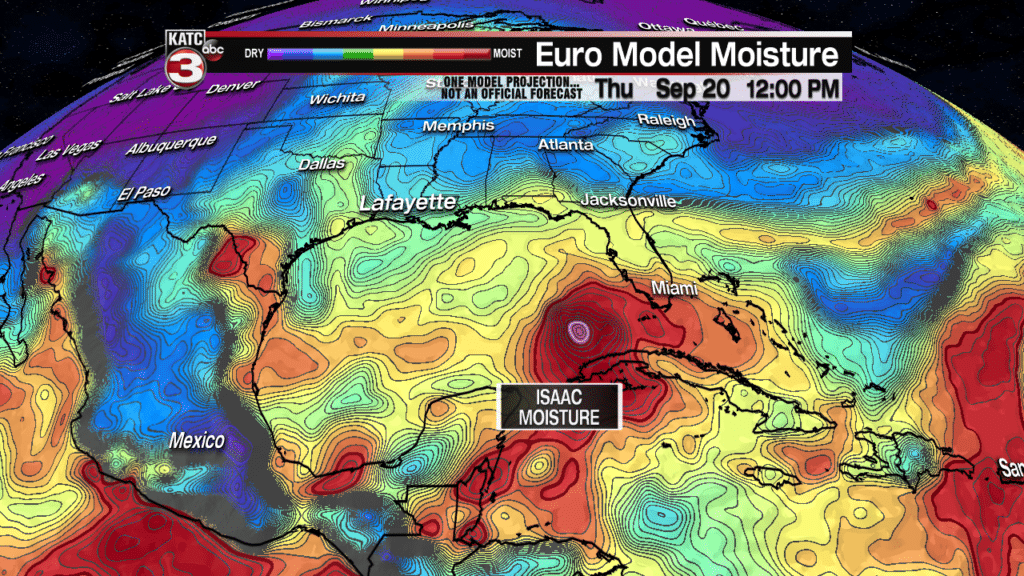 There might also be an opportunity for redevelopment/regeneration at that time, so this system will continue to garner interest for us locally in Acadiana for quite a while.

Meanwhile, Hurricane Florence was beginning its slow and painful interaction with the Carolina Coast bringing prolonged hurricane wind and surge threats through Saturday and ultimately a major inland flood event. 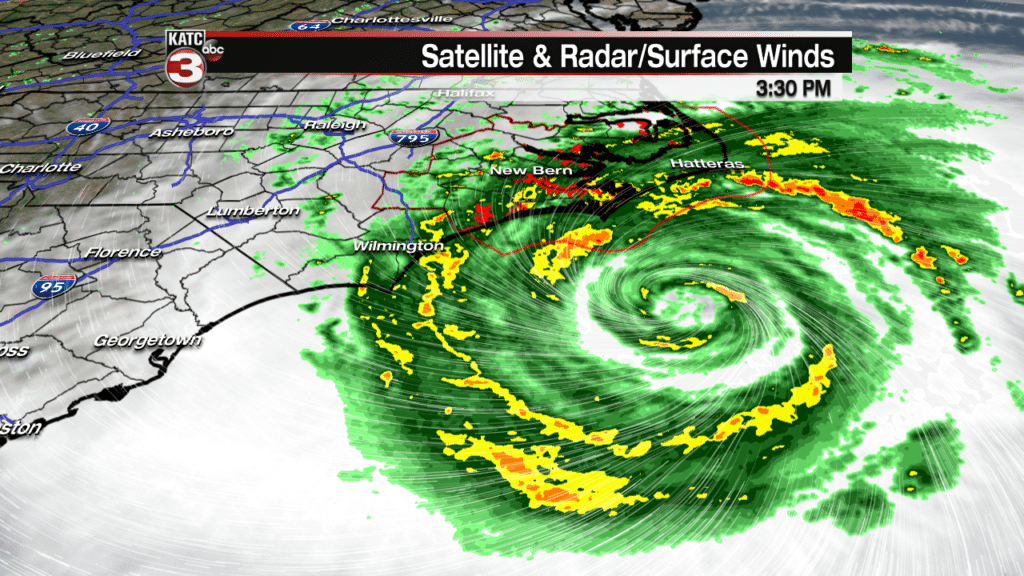 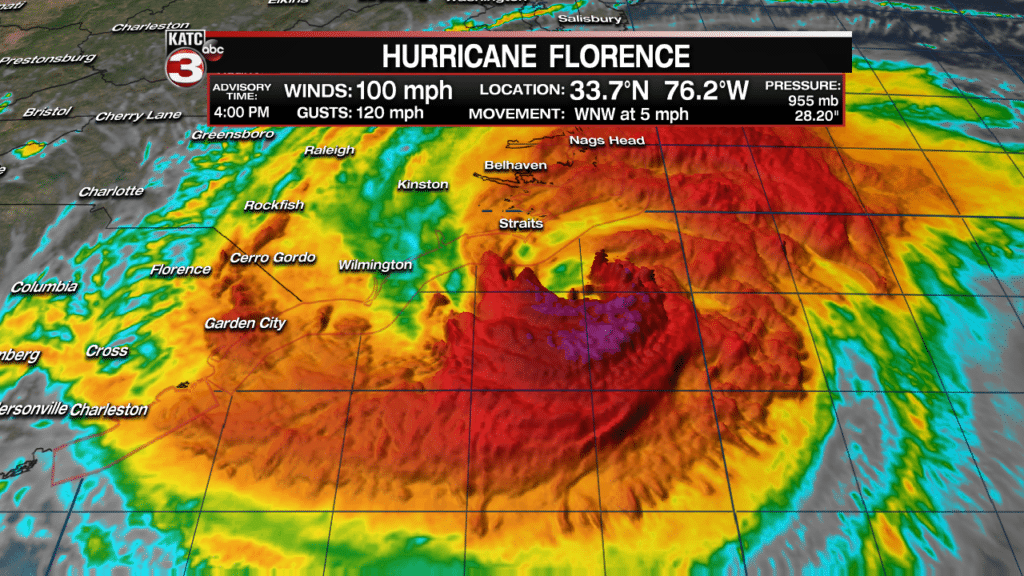 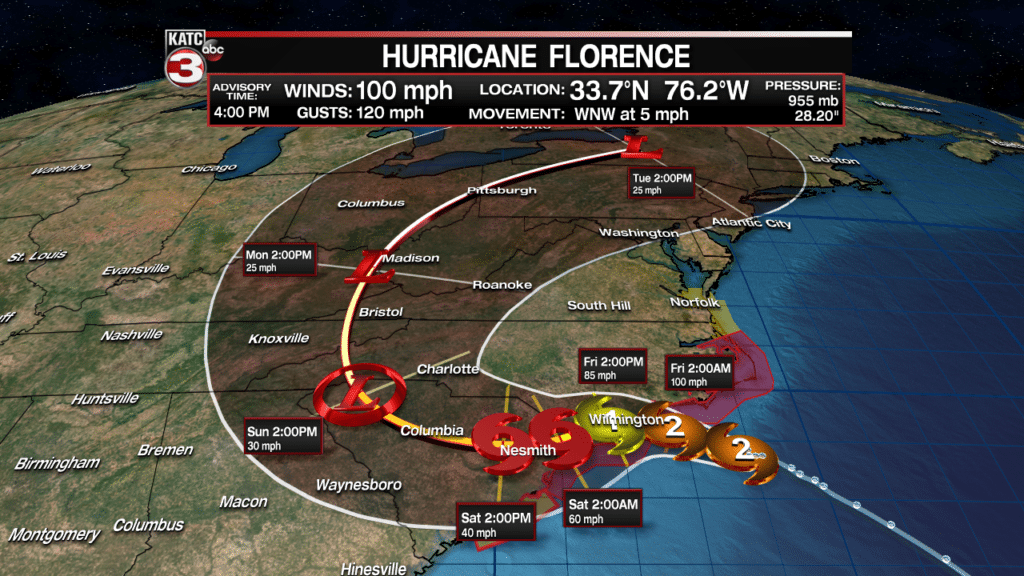 Rainfall from Florence may exceed two feet in areas as the storm will meander for several days before gaining latitude and eventually getting caught up in the upper level westerly winds. 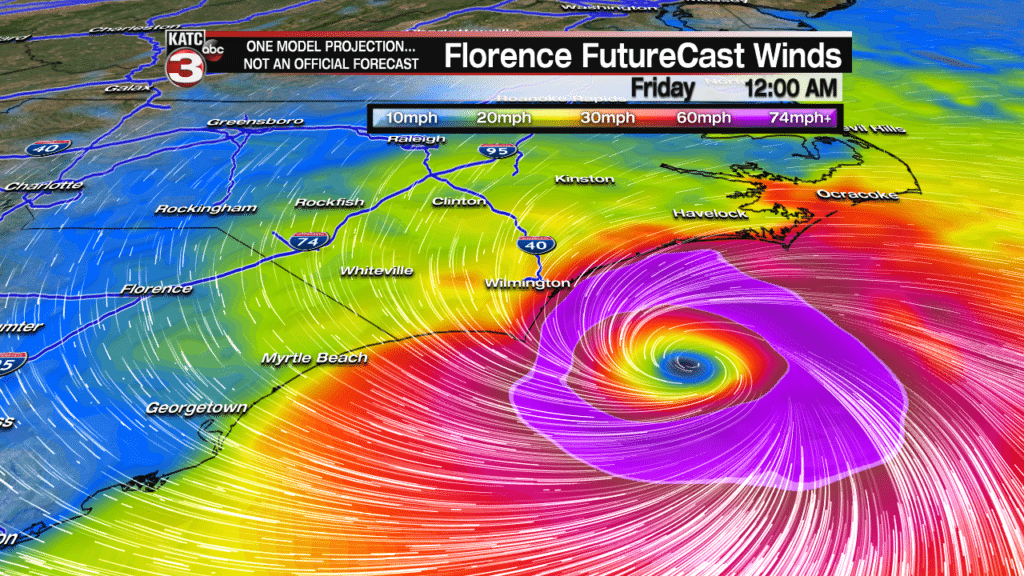 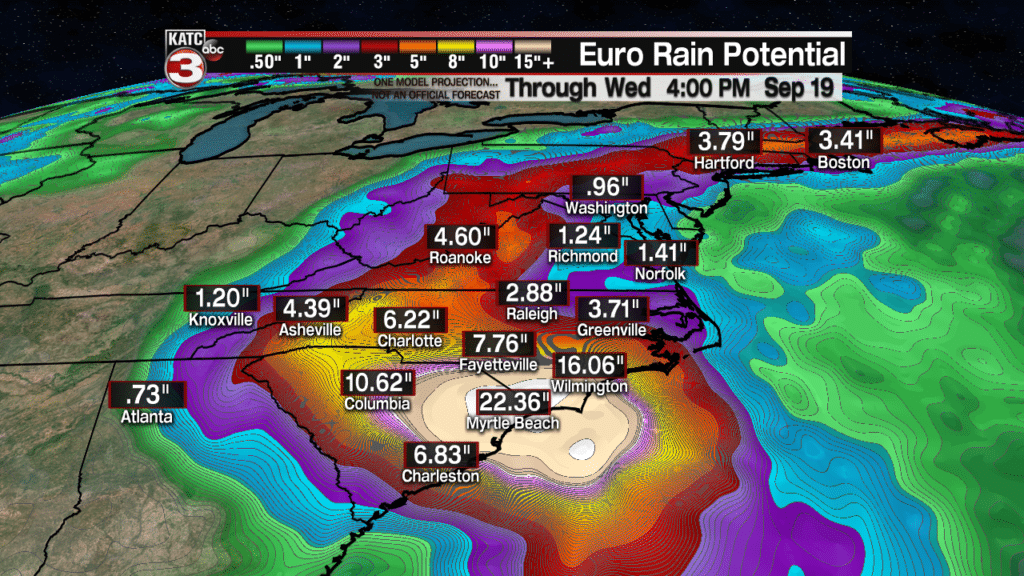 Elsewhere in the Atlantic Basin, Tropical Storm Helene may ultimately threaten the United Kingdom in the 4-5 day time-frame, but not as a purely tropical system, while Sub-Tropical Storm Joyce should weaken and dissipate late this weekend or by Monday.