In addition to Cormier, two Navy SEALs and 25 BDF members participated in the course. He was one of only 13 graduates. Cormier, a Lake Charles resident, has already earned a Ranger tab, Airborne and Air Assault wings during his nearly 15-year Guard career.

“1st Lt. Cormier is in excellent health, a great light Infantry Company Commander, and I knew he would represent Louisiana in a positive manner,” said Lt. Col. Keith Robinson, the LANG’s state training officer. “In addition, the 256th IBCT is scheduled for the Pacific Pathways exercise in 2020.  This course builds capacity in training for jungle operations.”

Going into the course, Cormier and the rest of his classmates had to learn about the hazards that are unique to the jungles of Central America.

“The Belizean jungle has a lot of dangers to be wary of; poisonous snakes and frogs, even a type of tree there is poisonous,” said Cormier.

The participants then rucked nine miles into the jungle, which would be their home for the next three weeks.

They also rehearsed battle drills, something Cormier was already familiar with from his previous military training.

Familiar, he said, except for the new terrain.

“What makes the jungle terrain difficult is obviously the dense vegetation, but you are also fighting up and down mountains the entire time,” said Cormier.

According to Cormier, six weeks of living in the jungle was nearly as difficult as U.S. Army Ranger School.

“I learned very quickly not to wear the same weight in the jungle as I did at Ranger school.

During Ranger school, your ruck could be anywhere from 75 to 125 pounds,” said Cormier. “I showed up in Belize with a 62 pound ruck, which is what I normally ruck with now. The nine-mile ruck in was doable for me, but to continually operate in the jungle with such a big ruck was not efficient, so at the end of the course I was only carrying around 44 pounds.”

During this portion of the class, there was a live, reflexive fire exercise.

“Basically, they put you under some stress and had you shoot at some little targets about 25 meters out,” said Cormier. “That usually wouldn’t be that hard, but when you throw the stress factor and the dense vegetation in there, it becomes a lot more difficult.”

Making it even more difficult were members of the BDF who “captured” Cormier and his classmates and forced them to use their newly learned skills to survive in the jungle.

The next phase of training saw Cormier and his peers learning how to teach what they learned to new BDF recruits.

“As a completely well rounded Soldier, you need to learn to fight in every environment … the world isn’t all flat, it isn’t all desert, and it isn’t all woodland.” said Cormier. “Being able to take that knowledge and teach it to your troops is invaluable. If I as a commander get a call saying that we are going to go to a mountainous area in a jungle, I now have a lot more knowledge to get my guys trained.”

Robinson said that continuing to send Louisiana Soldiers to the course would be a great benefit to the LANG. “In the future, the Louisiana National Guard would like to see a bench of certified jungle warfare instructors,” he said. “The 256 is designed to operate in restrictive terrain such as jungle warfare and is scheduled to participate in a training exercise in the Pacific in 2020, so they wanted to build that capability now.”

At the base of it all, though, Cormier said that fostering and strengthening our relationship with Belize and other neighboring nations is one of the more important aspects of the training.

“It never hurts to have a relationship with another country, and I think that Louisiana has been fostering that relationship with Belize as a state partner, through this training and other opportunities,” said Cormier. “This is especially valuable when you look at events like the earthquake in Haiti a few years ago, we (the U.S.) were able to jump right in because of the relationships that have thrived over the years.”

The LANG and the BDF have trained and worked together as part of the State Partnership Program, which is administered by the National Guard Bureau, for over 20 years. Over that time, the two countries have participated in over 257 events. This partnership has led to the beginning of several programs, such as a youth challenge program, modeled after the LANG’s, in Belize. 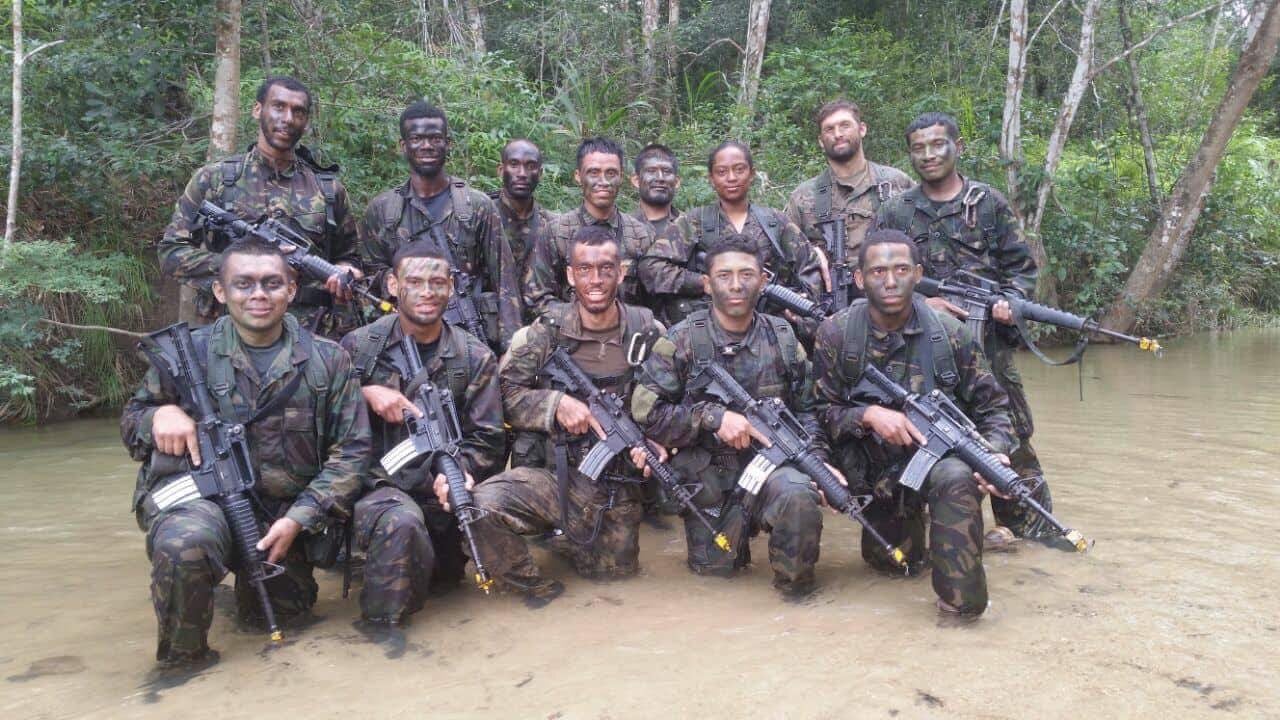 Participants of a Belize Defence Force Jungle Warfare Instructor course kneel in a creek in Belize. 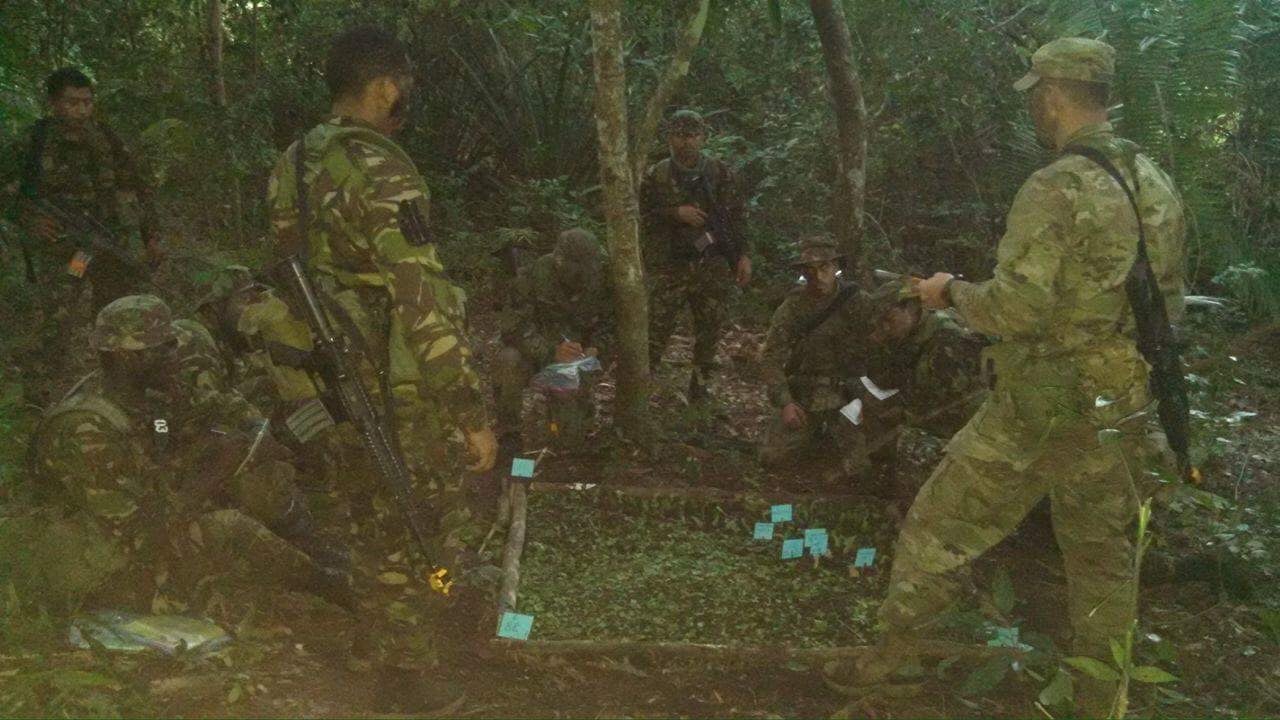 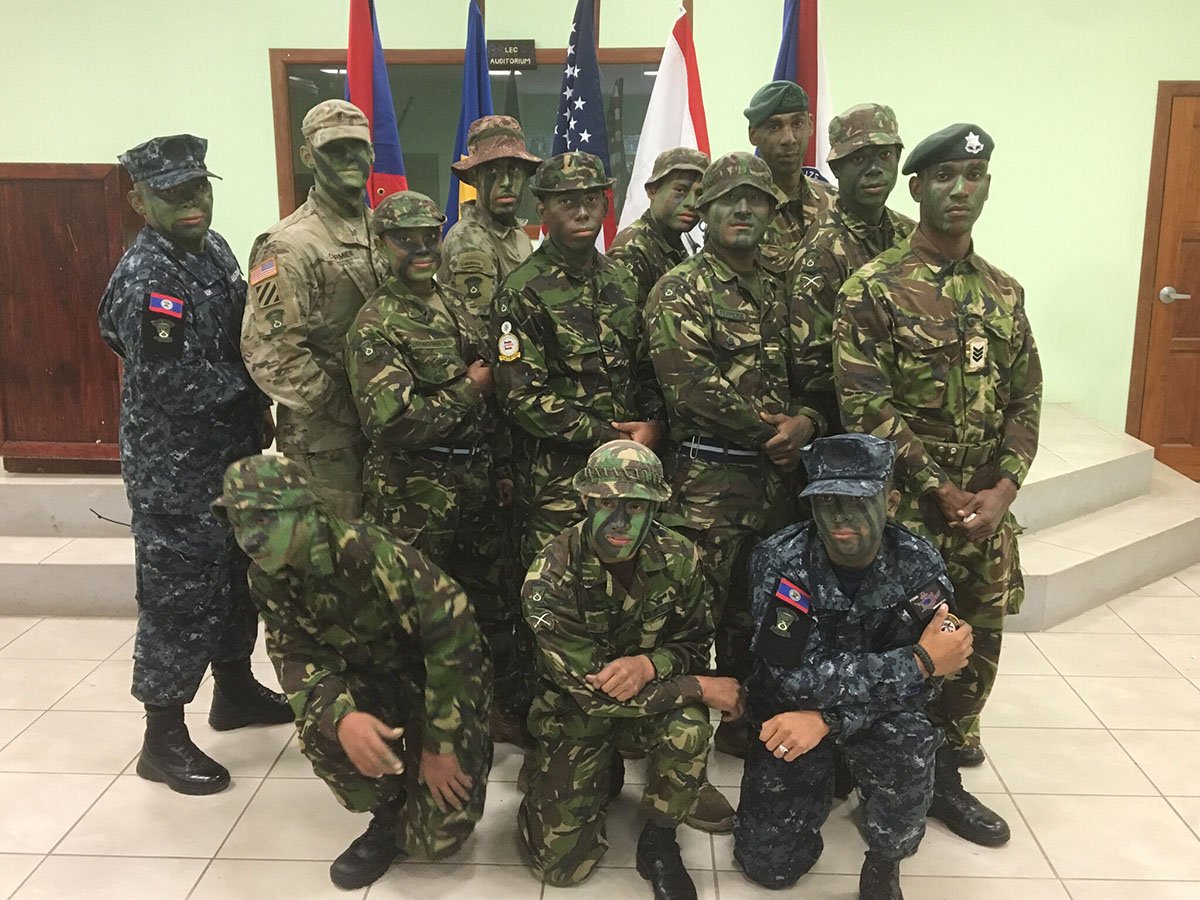 Louisiana National Guard Kenrick Cormier (second from left, back row) stands with his fellow graduates from the Belize Defence Force’s Jungle Warfare Instructor Course in Belize. Cormier was the first Guardsman to participate in the course.