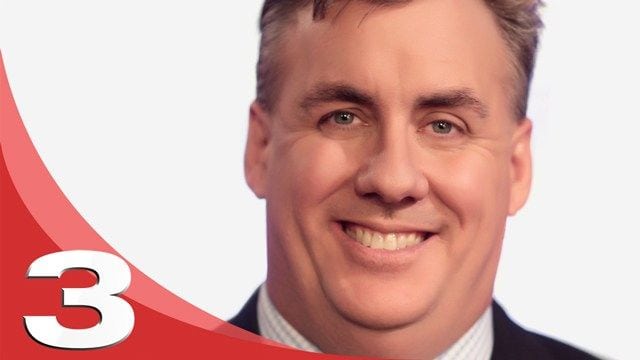 Dave Baker grew up in Granite City, Illinois just across the river from downtown St. Louis.  After high school, he attended Western Illinois University graduating in 1991 with a degree in Meteorology/Geography with a minor in Broadcasting.  While at Western he was a radar operator and storm spotter for McDonough County Civil Defense.  Dave discovered the television world in 1989 when the Department of Broadcasting needed a few brave Meteorology students for the launch of the first live, local newscast from the WIU Campus.

After graduation, Dave went to WTWO-TV in Terre Haute, Indiana to become the morning meteorologist for TV2’s First Report.  While at WTWO, Dave also found his place reporting, shooting, producing, technical directing, and working the assignment desk. He was an essential part of team coverage of a tornado outbreak in 1993, and the Arctic cold blast in 1994 where the temperature at WTWO dropped to minus 31 degrees!

The sunshine and warm temperatures attracted Dave to Louisiana. When he arrived at KATC in April of 1994, he joined former anchors Tom Voinche and Deborah Terribile on Good Morning Acadiana.  Dave earned the American Meteorological Society’s Seal of Approval in 1995 and was Chief Meteorologist from 1995-2004. He worked Acadiana’s NewsChannel at 5, 6 and 10 from 1995-2000, and returned to Good Morning Acadiana in April of 2000 where he remains today.  Dave says he enjoys “Waking People Up” on GMA rather than “Putting them to sleep”.   He has been recognized by the Louisiana Associated Press earning “Best Weather” and “Breaking Weather” awards. Dave was an integral part of the superior StormTeam3 coverage of Hurricanes Lili, Katrina, Rita, Gustav, Ike, Harvey, and Barry as well as the historic Flood of 2016.  He presented a radar study of Hurricane Lili at the Baron Weather Conference in 2003, and served on the Katrina/Rita recovery panel at the 2007 Bahamas Weather Conference.  He has visited hundreds of schools, and has made presentations to more than 20,000 students.

Dave will celebrate 25 years at KATC in April 2019. No other meteorologist has worked at KATC longer than Dave.  He has been forecasting weather for more than one third of KATC’s existence! In January of 2017, Dave was named co-anchor of Good Morning Acadiana. Now delivering your news Monday through Friday at 4:30am, he joins KATC’s Katie Lopez at the desk. Dave will remain a part of Storm Team 3, filling in, and backing up the team when severe or tropical weather strikes Acadiana.

Dave is married to Margo, a New Iberia native and award winning artist.  They lived in New Iberia raising their four boys, before returning to Lafayette in 2011.  Dave enjoys traveling with his family, gardening, and swimming.  As a teenager Dave was a National Qualifier in YMCA and USA Swimming.  He was also a member of the Western Illinois University Swim Team.  He has been certified as an official for USA Swimming and is the Meet Administrator and Timing System Operator for City of Lafayette Aquatics and the Southwest Louisiana High School Swim League.