cajuns only trailed once in the entire match 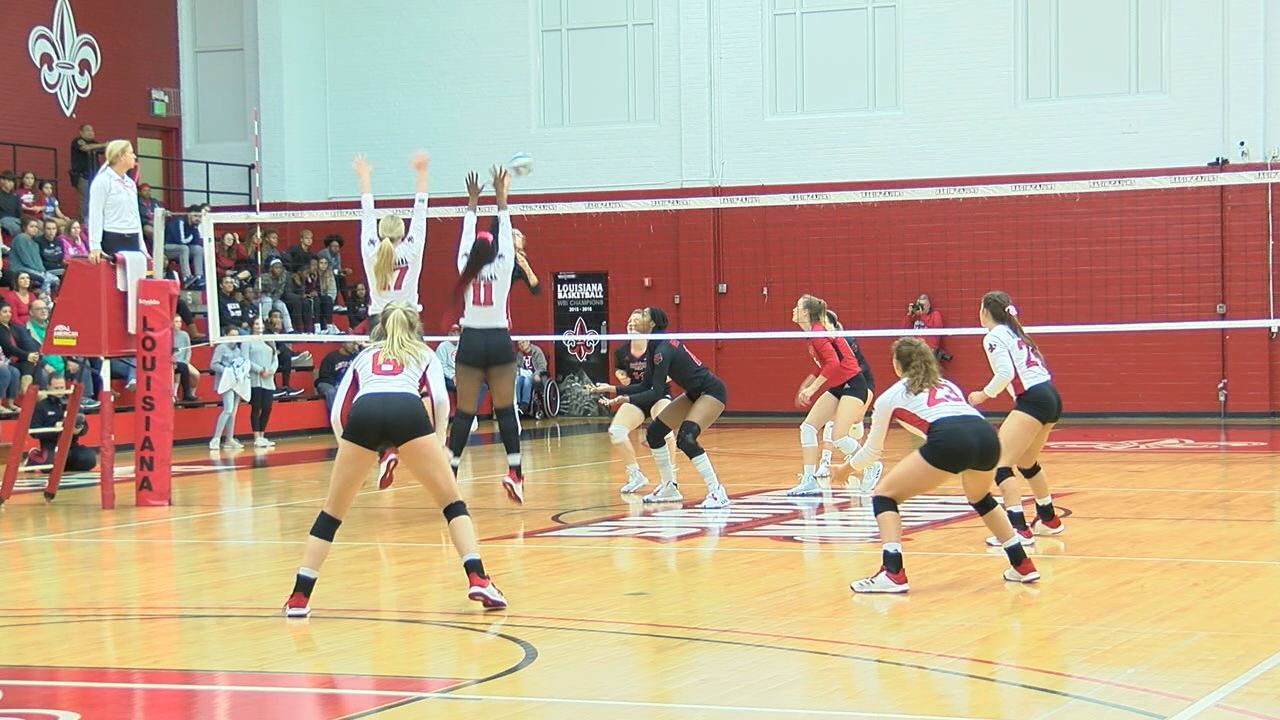 Louisiana Ragin’ Cajuns Volleyball used both its offense and defense to power past Arkansas State in straight sets on Saturday at Earl K. Long Gym and extend its winning streak to four matches.

The Ragin’ Cajuns led virtually the entire match in securing a second consecutive 2-0 weekend, not trailing until ASU grabbed a 9-8 edge in the third set.

With the win Louisiana moved past Arkansas State and into second place in the Sun Belt West Division standings.

A 4-0 start to the match set the tone for the evening for the Ragin’ Cajuns. The hosts established control of the opening frame after kills from Hali Wisnoskie and Celeste Darling jumpstarted a 6-1 run which opened a 12-4 advantage.

Knotted at 3-all in the second set, Louisiana broke free by pressuring the Red Wolves into three attack errors during a four-point, tie-breaking spurt. The last surge came after an ASU service error at 16-11 was followed by an ace served by Darling, then three more points were added to the Ragin’ Cajuns column increasing the lead to 21-11.

Louisiana used its offense in the third set, which out-killed ASU 16-10 in the frame, to complete the sweep. The aforementioned lone deficit of the contest was promptly erased when Tia Jade Smith scored the first of four straight kills on an 8-0 run that pulled Louisiana ahead 16-9.

The Red Wolves battled back into a 19-all tie, but the Ragin’ Cajuns ended any chance of additional sets after Wisnoskie and Smith found the floor for kills giving the hosts a lead they wouldn’t relinquish.

LEADING THE RAGIN’ CAJUNS
Wisnoskie reached double figures in kills for the fourth straight match as she recorded 12 kills. The junior outside hitter had multiple kills each set and scored 10 over the final two stanzas.

Darling provided another spark to the offense, tallying her eight kills on just 15 swings.

Smith was once again the headliner on defense as she added six more blocks (2 BS, 4 BA) to her weekend total leading Louisiana to a 9.0-5.5 edge in the match. The strong showing followed up the four block solos thrown up Friday night vs. Little Rock.

Kelsey Bennett added a team-leading 15 digs to the six kills she provided. Hannah Ramirez scooped 13 digs and Julia Angelo had a career-high 12 digs as the Ragin’ Cajuns ended the night with 62.

For the fourth straight outing Avery Breaux averaged over 10 assists per set. She passed out 32 helpers to hit the mark for the ninth time in 10 SBC matches.

On the court the Ragin' Cajuns face UTA on Friday at 6:30 p.m. and Texas State on Sunday at Noon. The weekend's festivities will be highlighted by former standout Priscilla Lima's induction into the Louisiana Athletics Hall of Fame which will be celebrated at EKL prior to the start of Sunday's match.