Dorian should move Tuesday; tropical season starts to heat up 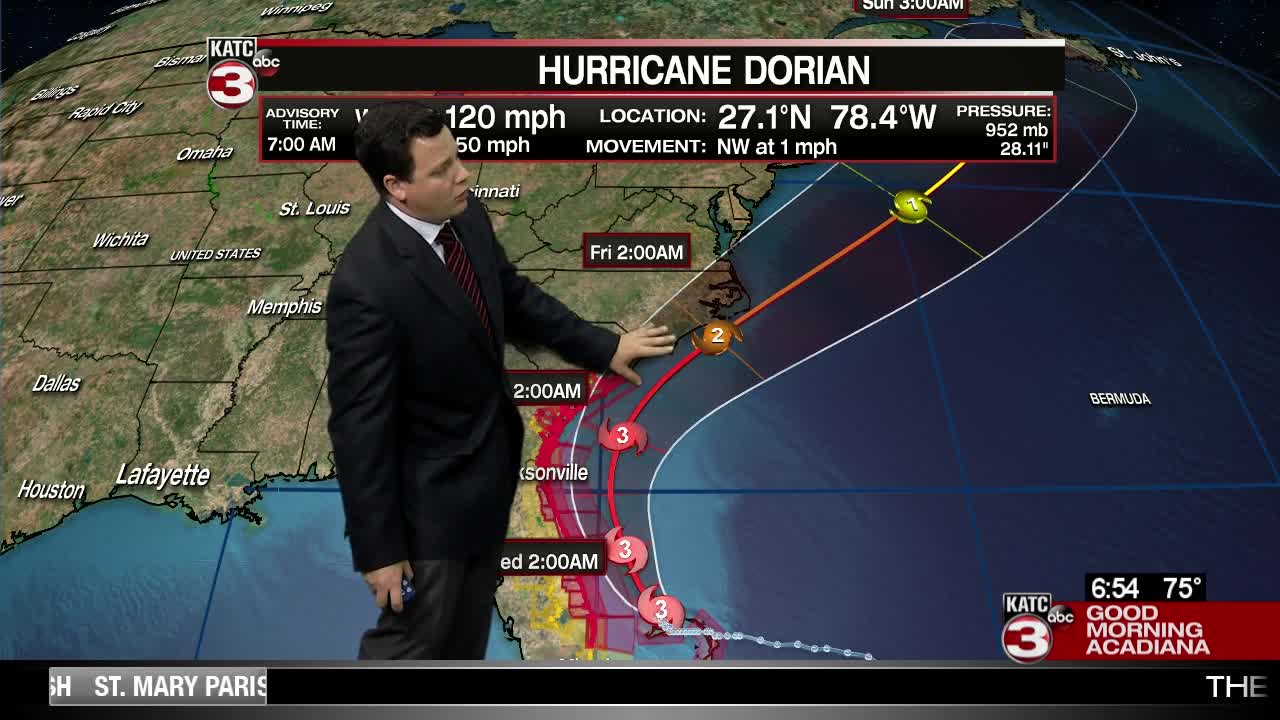 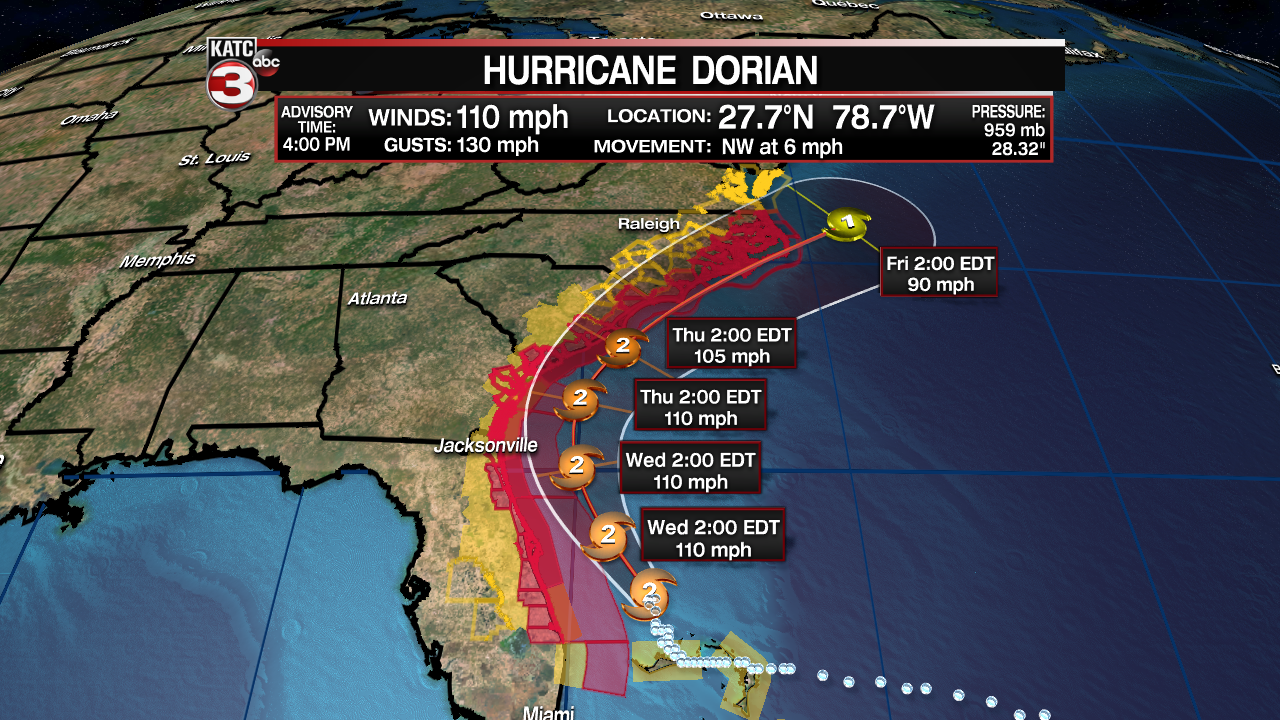 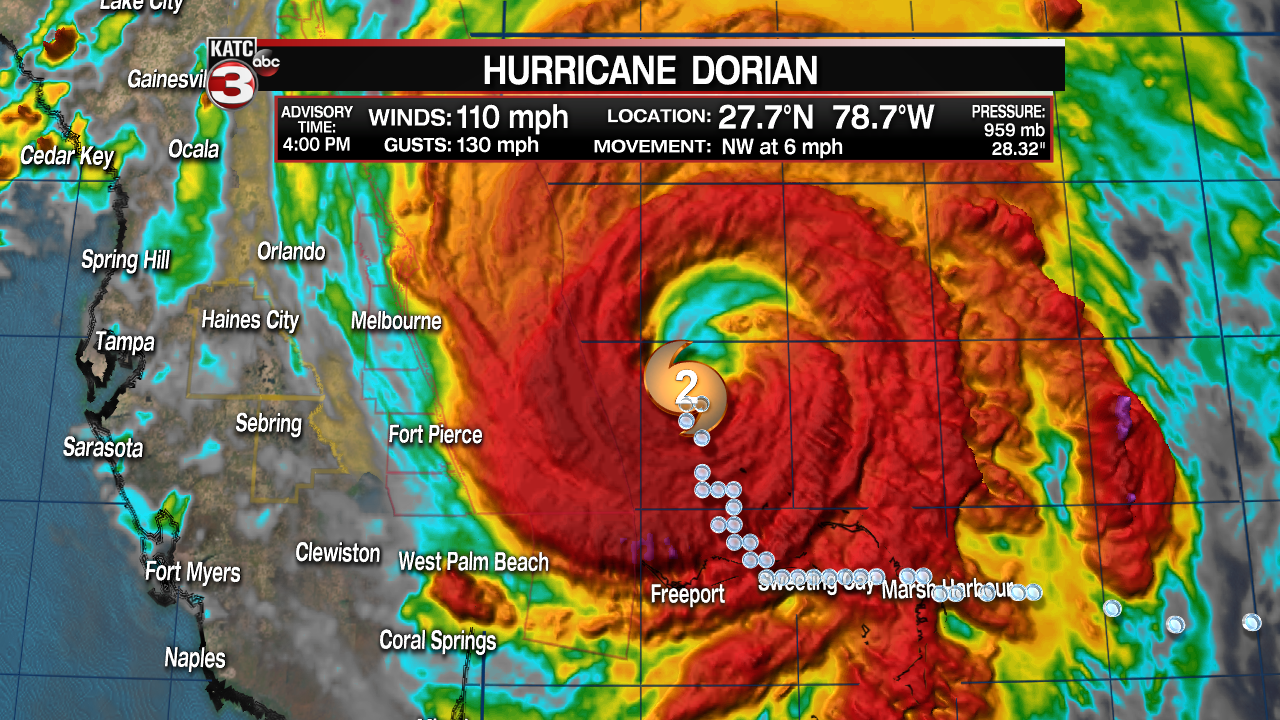 Dorian continues to pull away from the Bahamas moving to the NW at 6 mph with winds holding steady at 110 mph.

Winds are beginning to increase along the Florida barrier islands up to 40-50 mph as outer rain bands move over the peninsula.

Hurricane warnings and Storm Surge warnings have been extended up the East Coast to include all of the coastal areas North and South Carolina.

Dorian is beginning to pick up speed and move away from Grand Bahama as it is now moving to the NW at 5 mph with winds holding at 110 mph.

Unfortunately the island is still be hammered by dangerous winds, high storm surge and heavy rains.

Dorian has weakened slightly with winds now down to 110 mph but the storm is growing in size so the wind field is expanding meaning stronger gusts are now reaching the Florida coast.

The good news is the storm is finally starting to move again to the NW at 2 mph meaning it is moving away from Grand Bahama after thrashing the island as a major hurricane for more than 24 hours.

It's been over 24 hours since Dorian has made much movement, what was a crawl across the Bahamas on Monday has become a complete stop, with the eye of a category 3 storm still sitting in the same general area.

At this point it's not hyperbole to say that there are no words to describe what is happening on the islands, a Category 5 storm is catastrophic but one that doesn't move is something on a whole different level.

Minister of Agriculture and Marco City MP Michael Pintard, who lives on Grand Bahama, showing some utterly frightening footage of his home during the passage of Hurricane Dorian. pic.twitter.com/gugVsLMroB

My front yard!! #HurricaneDorian2019 keep praying!! We waiting for the eye of the hurricane so they can come save us!! pic.twitter.com/xpNoksbvyG

Both of those videos were taken early Monday, they've had a full day of major hurricane conditions since posting those videos online.

As of Tuesday morning Dorian was still producing winds of 120 mph with gusts peaking at 150 mph, and it'll likely stay a Category 3 storm for another several days.

While the cone stays largely offshore that doesn't mean that impacts won't be felt all along the coast, not only will the wind field spread out as the storm weakens but surge will continue to be a major issue.

A good point of reference for this storm is Hurricane Matthew (2016) which took a very similar path, and even staying offshore it produced flood causing storm surge all along the coastline.

As always wobbles with the storm can happen a small wobble to the west brings more impacts onshore, and can even lead to a secondary landfall in one of the Carolinas later this work week.

Good news has been hard to find when it comes to Dorian, but the forecast is looking a little more promising that Dorian should finally get kicked out to the north, and dry air along the coast isn't a bad thing.

As the trough moves to the north it'll be able to pull that system up and squeeze it between the two ridges that sit to it's left and right.

The reason for this is based off the fact that all tropical systems are trying to find their way to the poles as fast as possible, think of them as a release valve and when heat and energy build up along the tropics hurricanes help redistribute that heat and energy across the globe.

So in this case the path of least resistance to the north is riding the coattails of a passing trough and slipping between the ridges, movement should start to pick up Tuesday afternoon.

In the Bay of Campeche we will likely be seeing Tropical Storm Fernand before the day is over, a small disorganized storm that will bring some showers to Mexico.

This is nothing of concern for Louisiana as all the activity is going to be staying well to our south, it is though a good reminder that we are now at the very peak of the tropical system.

Right on schedule is a major uptick in activity in the Atlantic Basin with three other areas of interest that may generate a named storm in the next five days.

While none of these pose an immediate threat to Acadiana there is some additional vigilance that's required in keeping up with the forecast this time of year.

The last several years we've seen a series of storms flare up and intensify quickly and seemingly out of no where, Harvey (2017), Michael (2018), and Dorian (2019), are the ones that come to mind in the recent past that ramped up quickly.

Hurricane Barry was a good test of our hurricane plan this year but it wouldn't be a bad idea to do a quick review of your plan and make sure you're prepared for the heart of the season.

We'll all keep our fingers crossed that Dorian is the end of the season, but if it's not then we'll be here with all the updates.