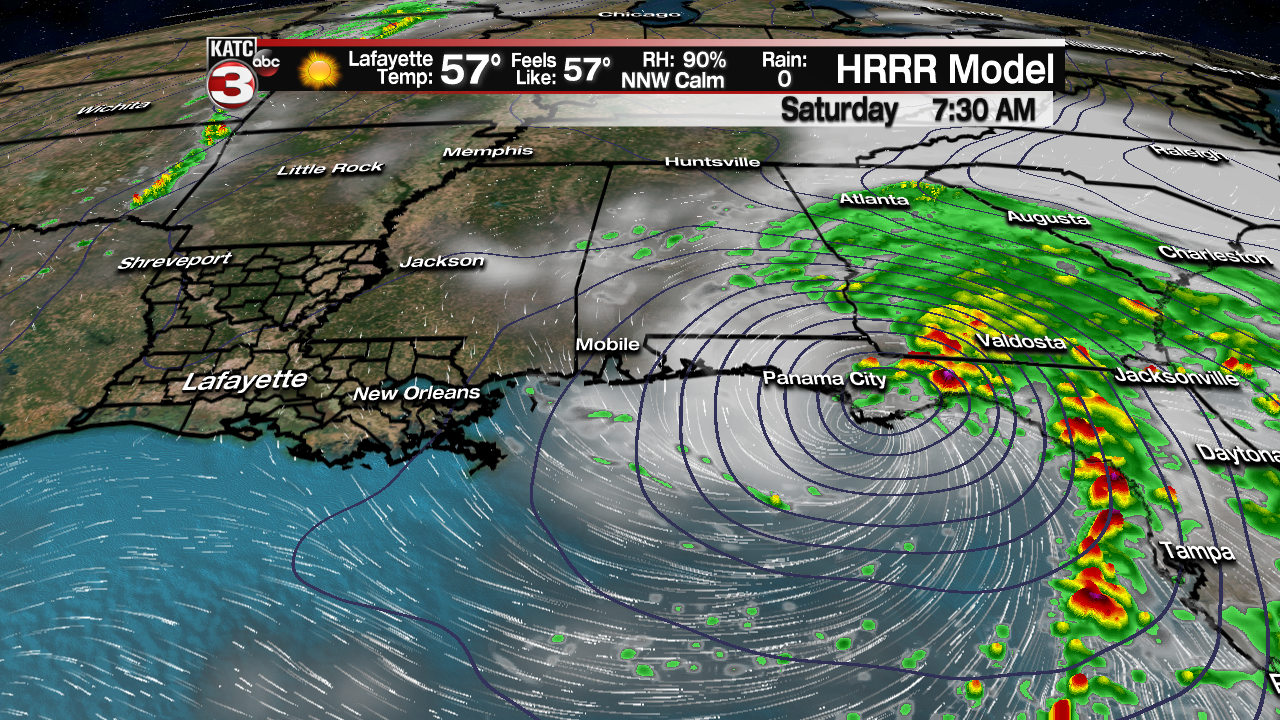 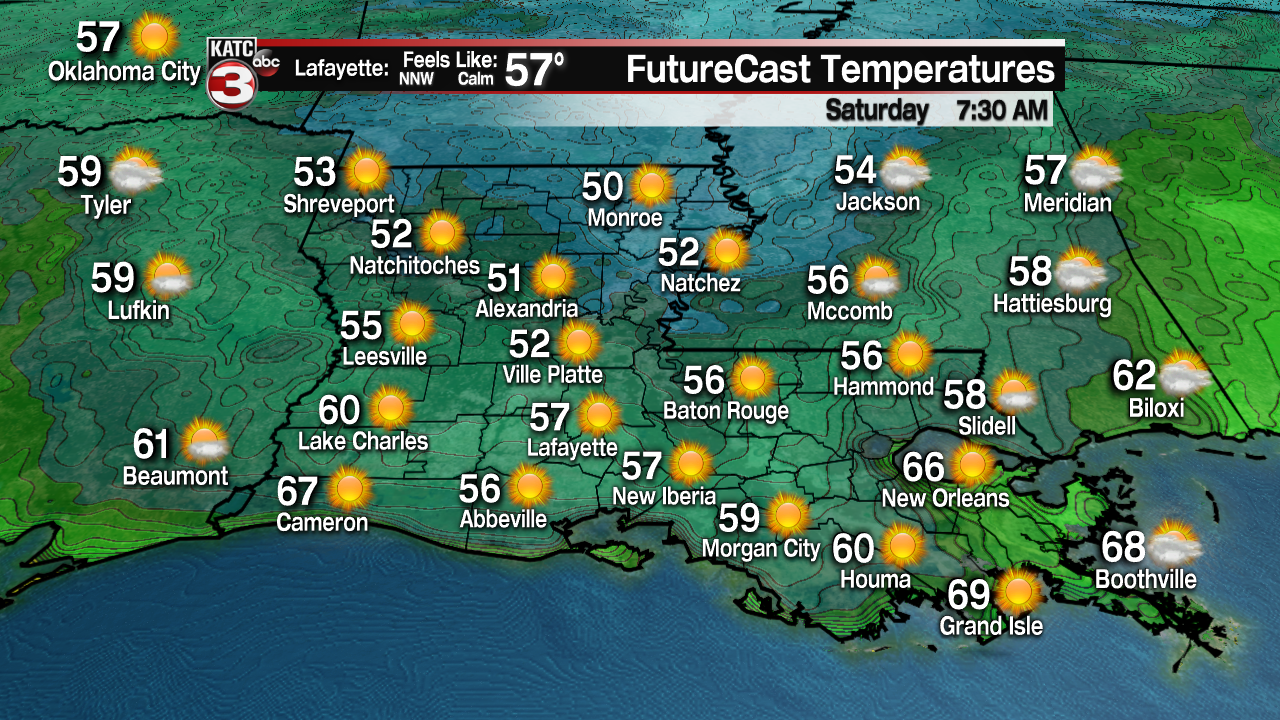 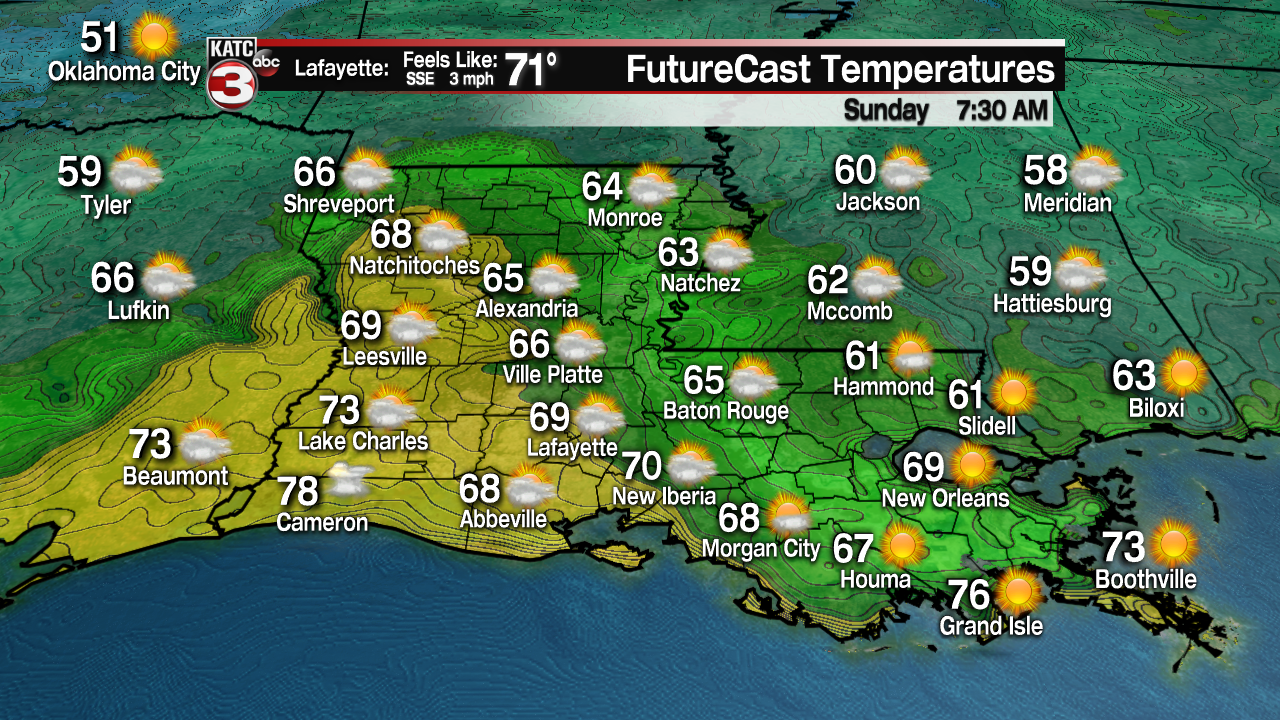 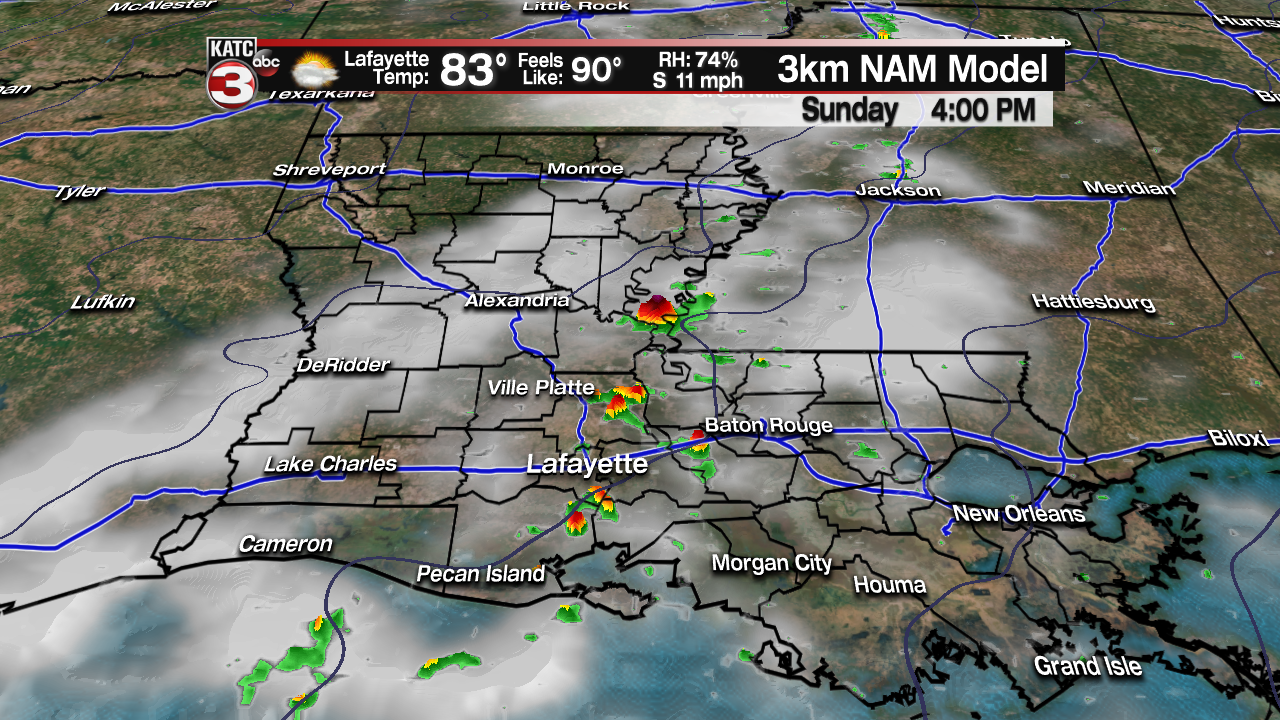 After a cool start Saturday morning, Acadiana will get to enjoy a mostly sunny and warmer weekend while Tropical Storm Nestor impacts the Panhandle and West Coast of Florida.

Look for a morning start locally in the mid-50s across the area Saturday, with mostly sunny skies warming us into the lower 80s for the afternoon.

It won't be nearly as cool Saturday night as southerly winds kick back in bringing our Sunday morning temperatures back into the mid-upper 60s, to near 70 along the coast.

Sunday will become partly cloudy, warmer and more humid with highs pushing well into the mid-80s.

A few isolated showers will be possible Sunday with rain chances near 20%.

A strong front will traverse the region Monday yielding at least an 80% chance of showers and thunderstorms, some of which could be severe, producing damaging winds.

Acadiana will probably be hatched in for a "marginal" to "slight risk" of severe storms Monday by the Storm Prediction Center...stay tuned.

Significantly cooler and dry air will move in for mid-week with highs in the 70s accompanied by lows dropping into the low to mid 50s.

Another front Friday, with a more efficient delivery of Canadian air, will usher in chilly temperatures next weekend with highs expected to stay in the 60s while lows could drop into the chilly low to mid 40s!

Meanwhile in the tropics, the area of disturbed weather in the Gulf of Mexico was upgraded to Tropical Storm Nestor Friday afternoon with 60 mph winds.

The storm was moving northeastward at 22 mph which will bring tropical storm conditions primarily to the Florida Panhandle eastward to the west coast of Florida by Saturday morning.

Satellite imagery late Friday afternoon revealed that Nestor was a lop-sided storm, with all the convection east of the center thanks to fairly stout upper level westerly winds, and appeared more like a sub-tropical, rather than a purely tropical storm.

This system will bring tropical storm force winds near and east of the center late Friday night into Saturday morning across the Florida Panhandle into the Big Bend region of the state.

In addition to a storm surge of 3-5ft in the Big Bend area, rainfall totals from the central Panhandle eastward could be in the 2-6" range, with few isolated areas possible reaching 8-10" in spots.

This system will gradually weaken as it impacts portions of Georgia and the Carolinas later Saturday into Sunday before moving back out into the open Atlantic.

The 4pm Advisory Friday also discontinued the Tropical Storm Warning from Grand Isle, Louisiana to the Mouth of the Pearl River, and from the Mississippi/Alabama border to west of Navarre, Florida.

No major changes with Tropical Storm Nestor...who's an empty nester on its western flank. Lopsided, more sub-tropical-like storm with most weather, winds and rough seas primarily in the eastern half of this storm.

Based on latest guidance, heaviest rains of 3-6" plus, isolated near 6-9", highest winds, and 3-5 ft surge likely from the Florida Panhandle into the Big Bend area. Fortunately storm moving at a good clip limiting some of its flood potential