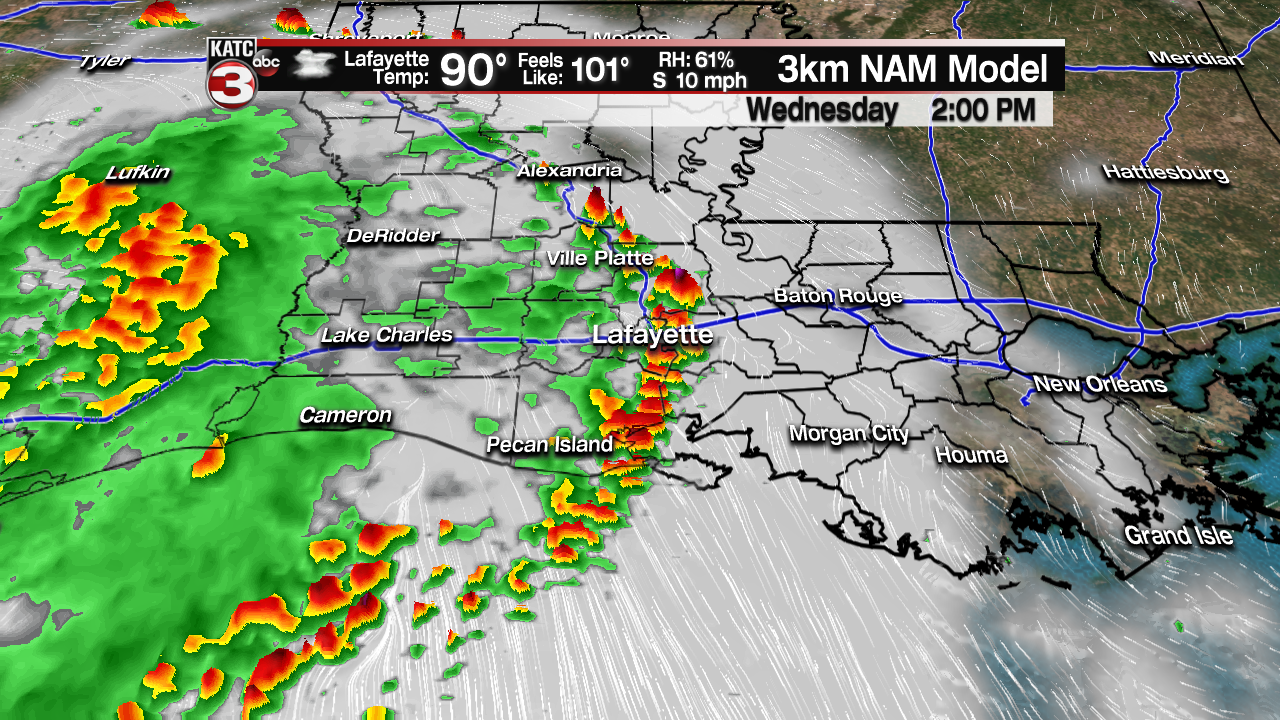 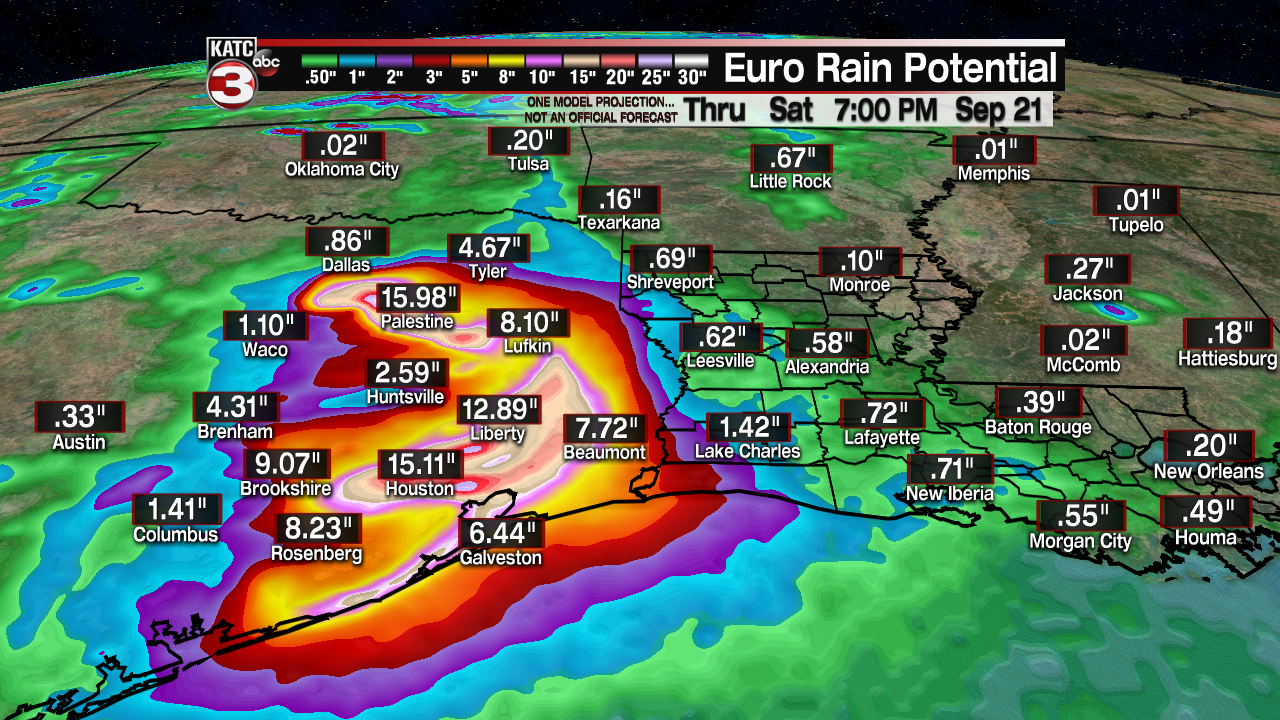 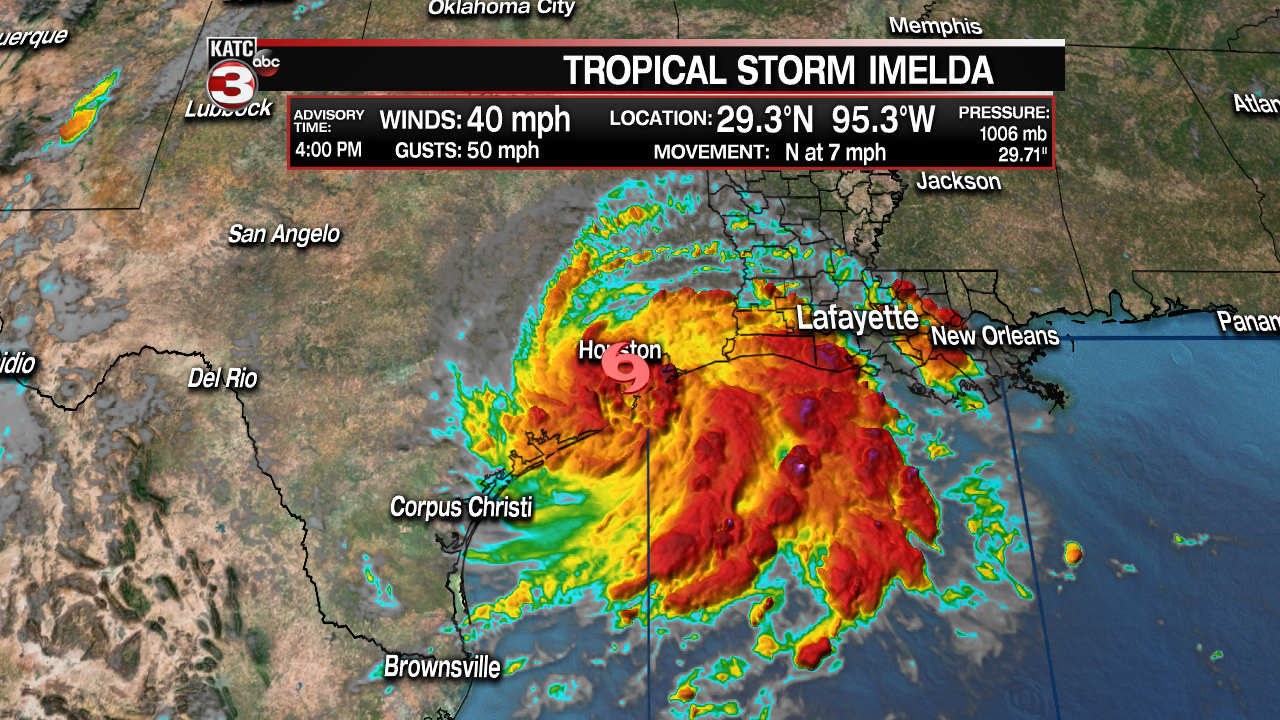 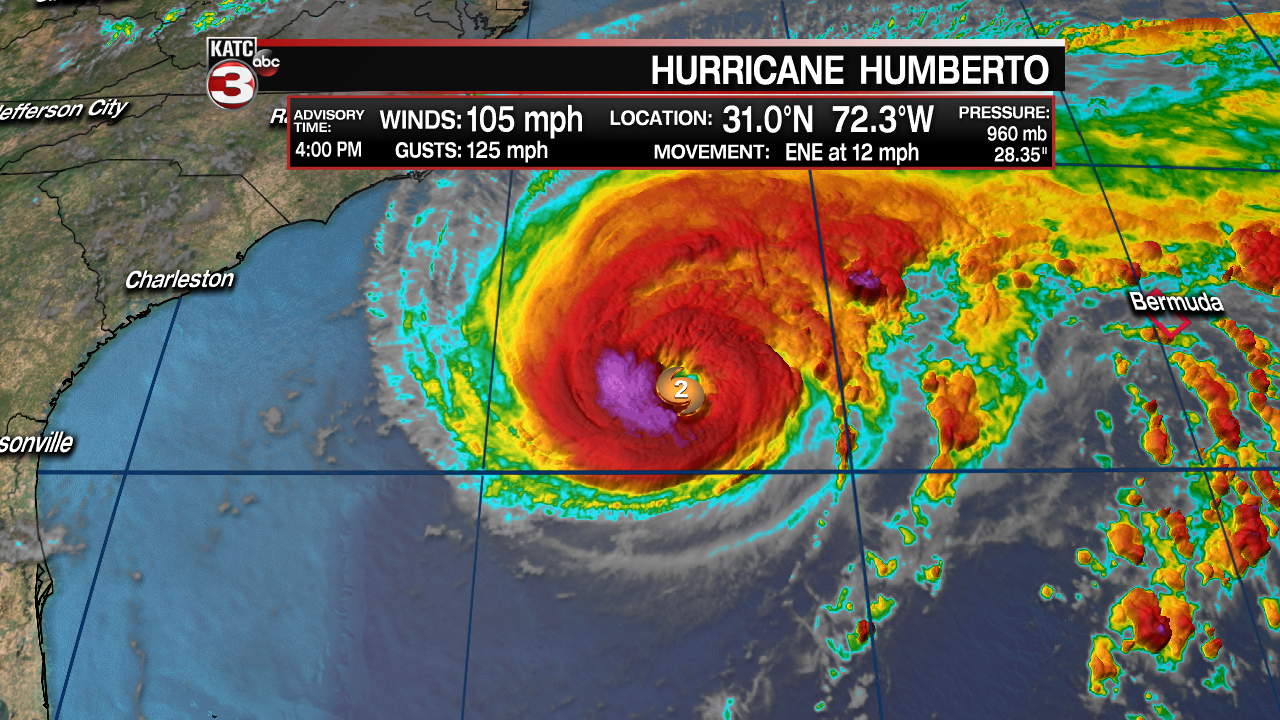 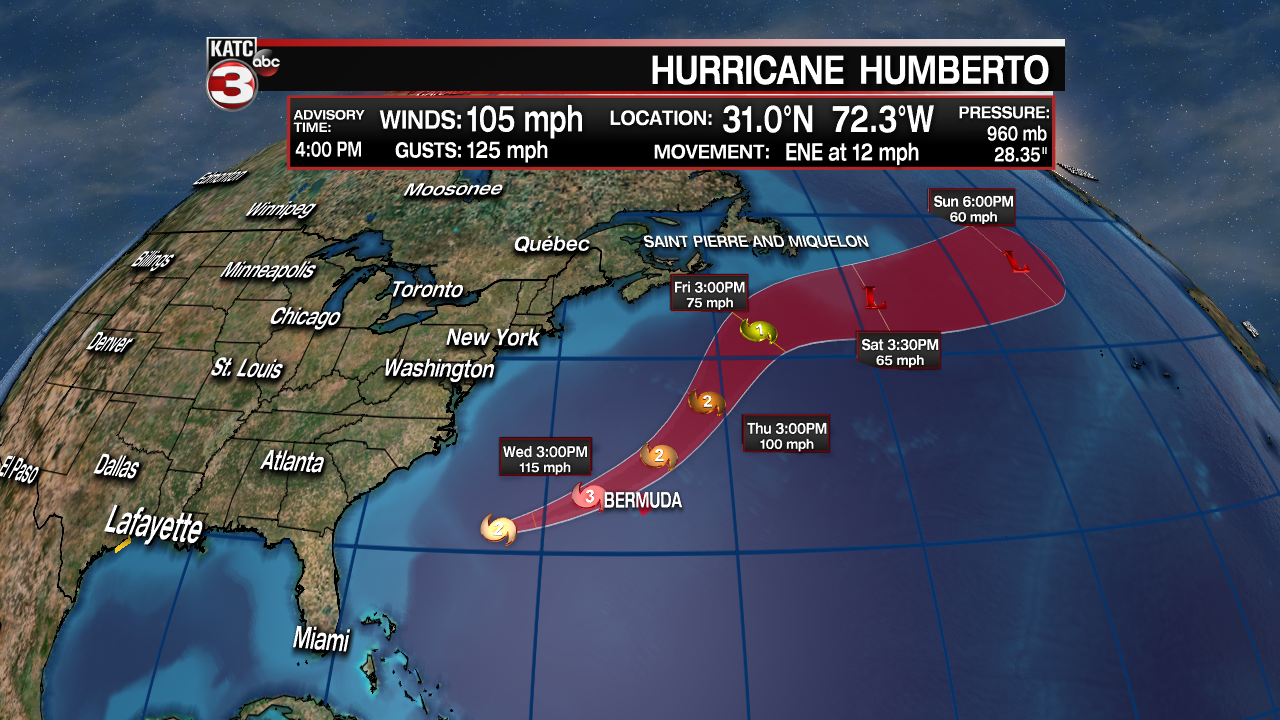 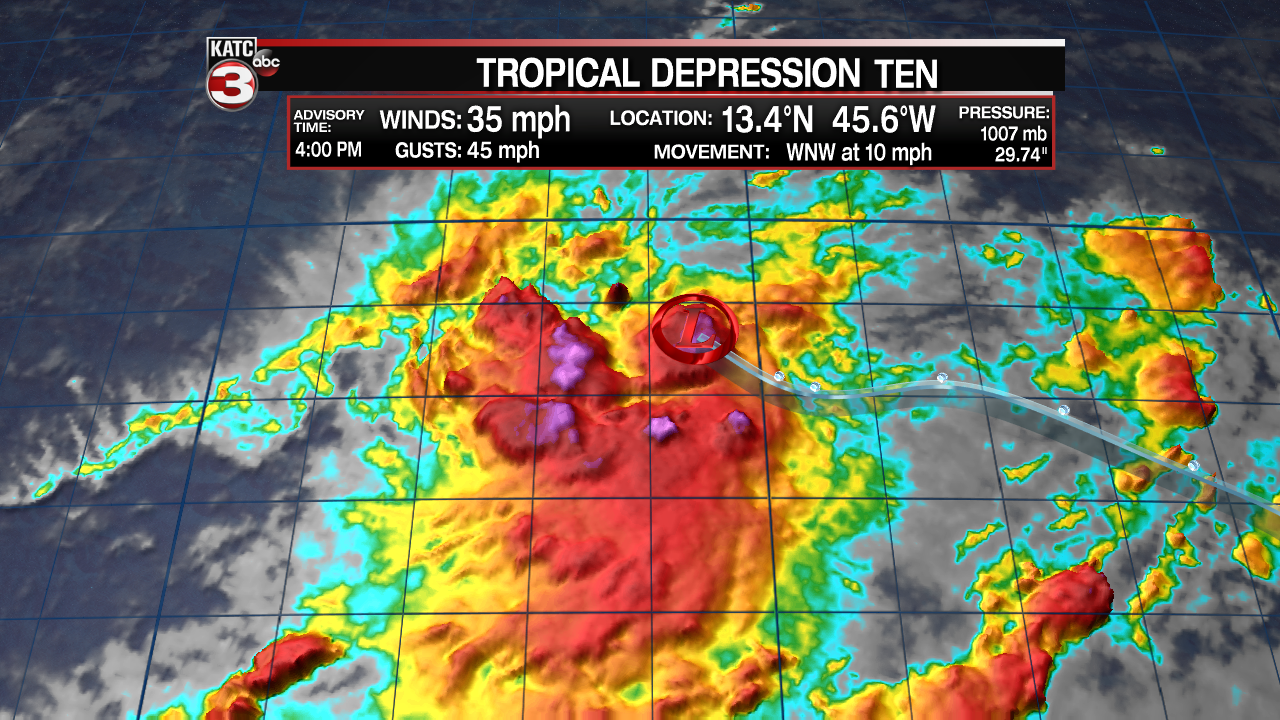 The area of showers and storms that we have been watching in the Gulf of Mexico the past several days has really fired up on Tuesday catching the eye of the National Hurricane Center as it went from a 30% chance of development, to a 50% chance of development, to Tropical Depression Eleven, then Tropical Storm Imelda, followed quickly by Imelda making landfall near Freeport, Texas, in the matter of a couple hours.

As Tropical Storm Imelda slowly moves to the north towards Houston it will weaken but over the next few days this relatively small storm will bring flooding rains to portions of SE Texas.

Areas from Galveston up to the Houston metro and over to Beaumont could pick up 8-15 inches of rain, with the possibility for isolated spots to see 20+ inches, between now and Thursday.

These heavy tropical showers/storms, producing 2-3 inches of rain an hour, will likely create flash flooding problems throughout SE Texas the next several days.

The Weather Prediction Center has SE Texas under a moderate risk for flash flooding the next 3 days.

For us in Acadiana we will just have to watch for some tropical rain bands that will be expanding out for the center during the late morning into the afternoon on Wednesday and Thursday.

These rain bands should sweep through Acadiana at a decent clip but at times they could produce some heavy downpours and with gusty winds up to 40 mph.

A Flash Flood Watch has been issued for Beauregard, Calcaseiu and Cameron parishes they will have the best chance to see the higher rain totals in the 2-6 inch range over the next couple days.

What we will have to watch for is if any of these showers/storms train over the same spots which could lead to minor flash flooding, but the chance of this looks rather slim.

Also, for those communities along the Gulf a Coastal Flood Advisory has been issued until Wednesday afternoon as tides will run about 1-2.5 feet above normal levels as Imelda will produce a persistent southerly flow pilling up the water along the coast.

By Friday Tropical Storm Imelda will have weaken down to a surface low as it heads for Dallas, pulling most of the rain to the north, but a few hit or miss showers could still linger through the afternoon, especially north of I-10.

The good news is thanks to the passing showers and extra clouds temperatures will stay in the mid to upper 80s the rest of the week but it will still be warm and humid at night with lows in the mid 70s.

By the weekend a surface high over the east coast should push down drier air over the southeast creating sunny and dry weather with highs in the upper 80s to near 90 and comfortable humidity levels.

As for early next week it looks fairly typical for middle September with highs in the upper 80s to lower 90s with partly cloudy skies and the slight chance for a stray shower in the afternoon.

By next Wednesday our rain chances might go up again as another area of tropical moisture moves into the Gulf and towards Acadiana.

Out in the Atlantic Hurricane Humberto is looking better organized, with a well-defined eye, as a category 2 storm with winds up to 105 mph.

Humberto continues to move to the ENE at 12 mph away from the United States and could become a major category 3 hurricane Wednesday evening into Thursday as it slides just to the north of Bermuda.

After passing Bermuda Humberto will turn to the north and begin to weaken as it moves over cooler waters in the north Atlantic and should become a subtropical low by this weekend.

To go along with Hurricane Humberto we now have Tropical Depression Ten.

This storm is still looks rather unorganized on satellite but has winds of 35 mph and is moving to the WNW at 10 mph.

The system should continue to slowly strengthen over the open Atlantic the next couple days and could become a hurricane by Friday.

Right now the NHC track, and the models, have Jerry staying out of the Caribbean as it moves to the north of Puerto Rico.

Beyond day 5 the models have Jerry eventually making a turn to the north away from the Gulf and East Coast but we will have to watch this closely and make sure things don't change in the coming days.

Lastly, the National Hurricane Center is watching a tropical wave just off the west coast of Africa.

They are giving his wave a 20% chance of development over the next 5 days but the models are indicating that this too could become a tropical storm (Karen) in the 5-7 day time frame.