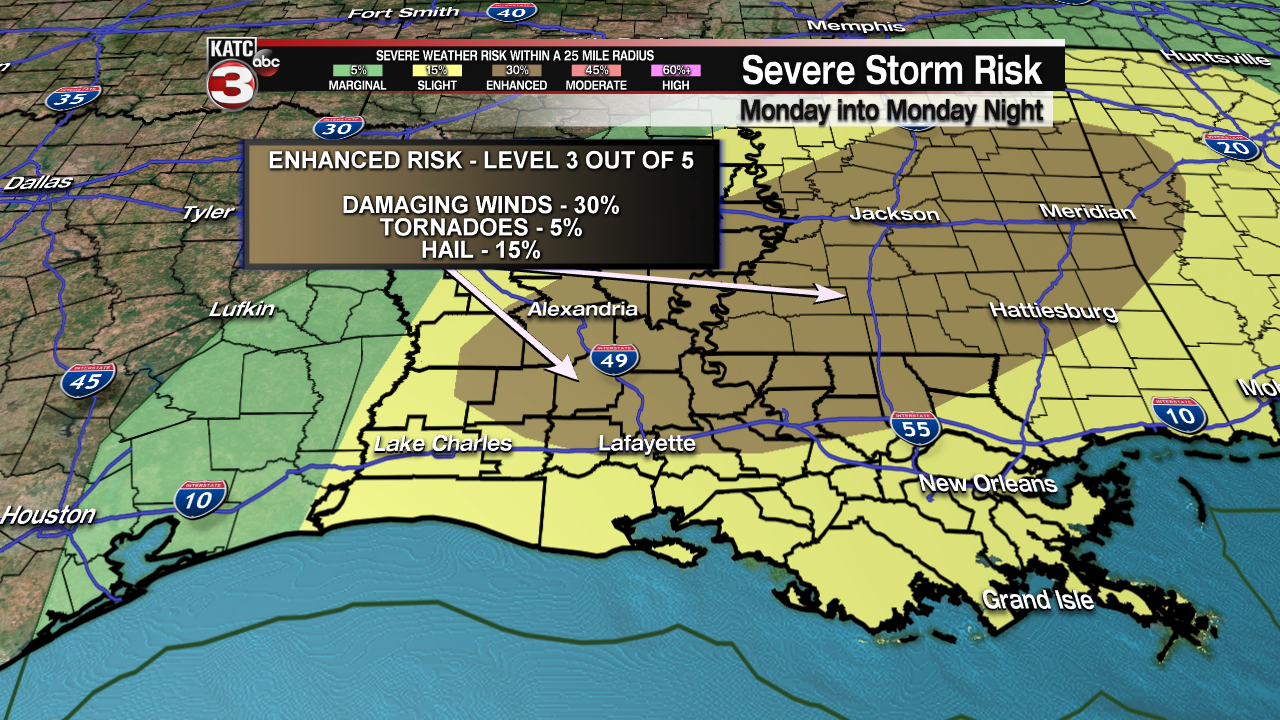 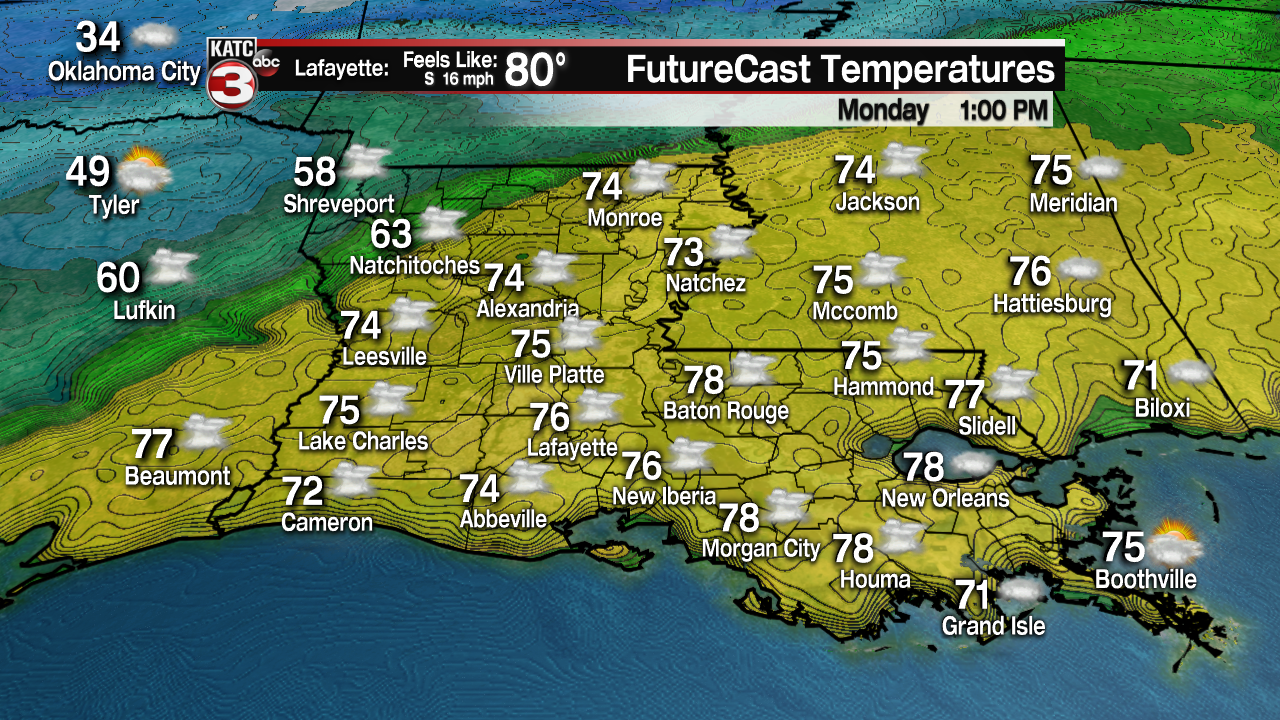 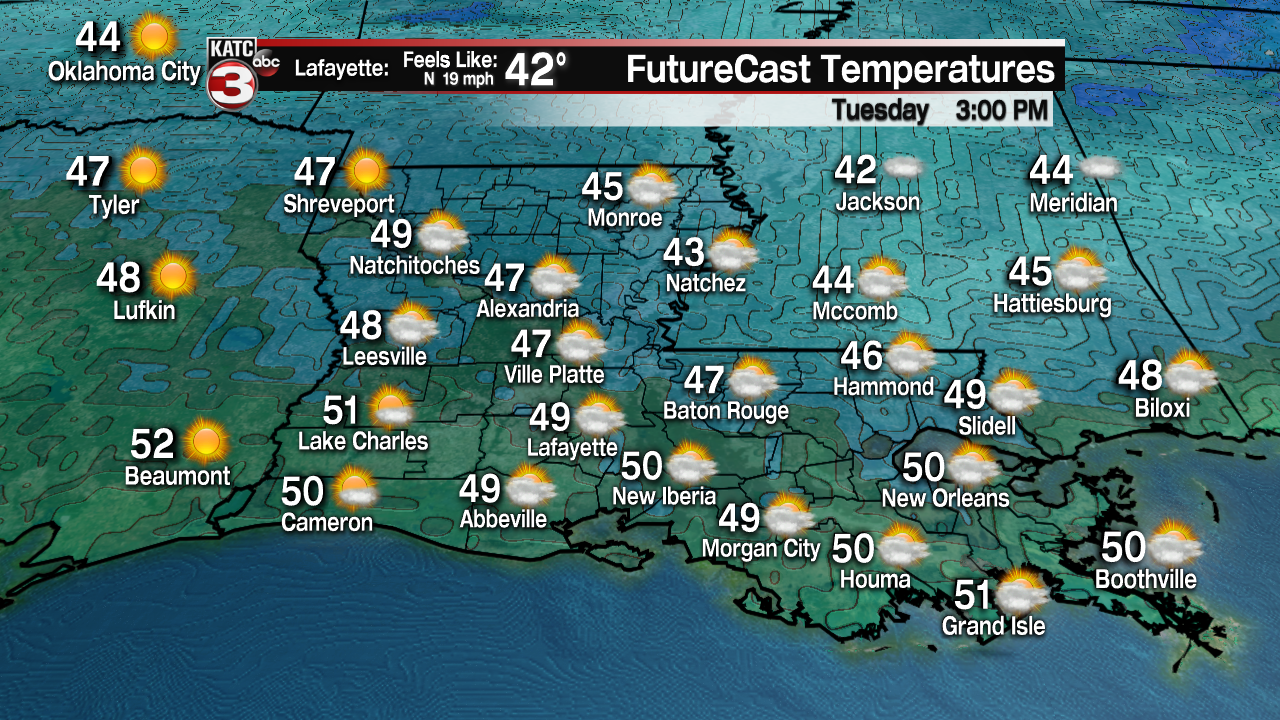 The Storm Prediction Center Sunday increased the threat of severe storms for Acadiana to an "enhanced" level (3 out of 5) ahead of a cold front for Monday afternoon into the evening hours.

An enhanced threat means there is roughly a 30% chance of severe storms within a 25 mile radius in any point within the hatched area...in this case, the main threat will be for storms that could contain damaging winds, and to a lesser extent, isolated tornadoes and perhaps some hail.

The greatest risk of severe storms in Acadiana looks to be along and north of the I-10 corridor.

Monday will be a day to stay "weather aware" as there will more than likely be a severe thunderstorm and/or tornado watch(es) posted for portions of the Acadiana area into Monday afternoon and likely, into early evening.

Forecast Details: In the near term, expect breezy, mild and humid conditions for Acadiana overnight through Monday morning with temperatures holding in the upper 60s to near 70 degrees.

It will remain mostly cloudy, breezy and mild for most of our Monday morning with the chance of showers and storms ramping up from west to east during the afternoon.

Upper level winds profiles favor strong vertical and some direction shear, so any "discrete" or "loner" cells might show some rotation and produce damaging winds and/or an isolated tornado into the early to mid afternoon.

Then a broken to solid line of showers and thunderstorms should develop into the latter part of the afternoon hours with activity ripping through the area into the early evening hours.

The risk of severe storms will likely continue until the frontal system blows through the area sometime between 9 pm to midnight.

Per usual for Acadiana, one of the mitigating factors that could limit the threat of severe weather would be the influence of a more stable marine layer air-mass from the Gulf of Mexico.

This factor traditionally limits severe weather threats along the coastal parishes (thus, a slight risk area there) while the effects are felt less with increasing distance from the coast.

Due to the progressive nature of the cold front, rain totals while briefly very intense, should be limited to generally .75 to 1.75"...a good soaking, but no flooding expected.

After the storms, it will become breezy and much cooler/colder with temperatures dropping from the mid-upper 70s Monday afternoon into the mid-40s with a wind chill by Tuesday morning.

Lingering clouds, breezy and chilly conditions are anticipated Tuesday with temperatures hovering in the upper 40s to near 50.

A light freeze may be possible Wednesday morning primarily for the northern-most Acadiana Parishes (Allen, Evangeline, St Landry and Avoyelles).

Sunshine and seasonably cold temperatures are anticipated for Wednesday with a light freeze and frost appearing to be in the cards for all or us Thursday morning.

The pattern looks to stay cool and quiet into Thursday with the next possible weather system to possibly bring some showers to the area Friday night into early Saturday.

Consult the KATC 10 Day Forecast for the latest, as still 10 days out, the forecast for Christmas is definitely subject to change!