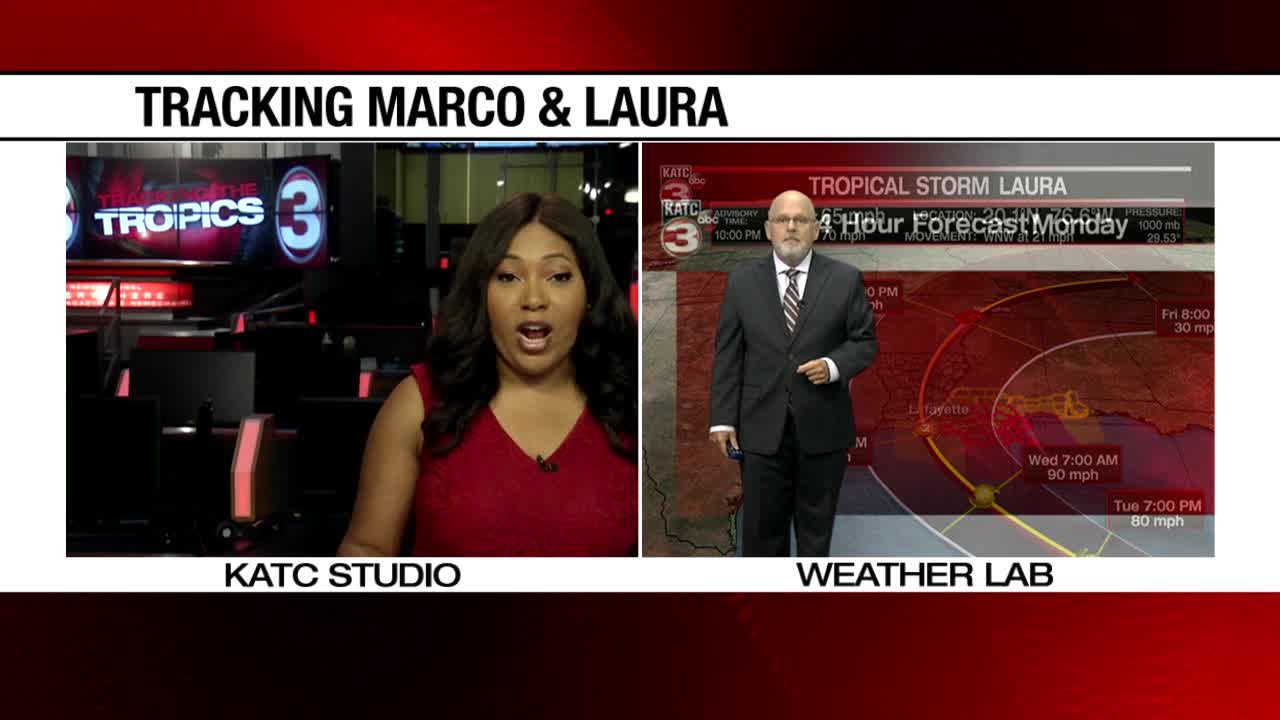 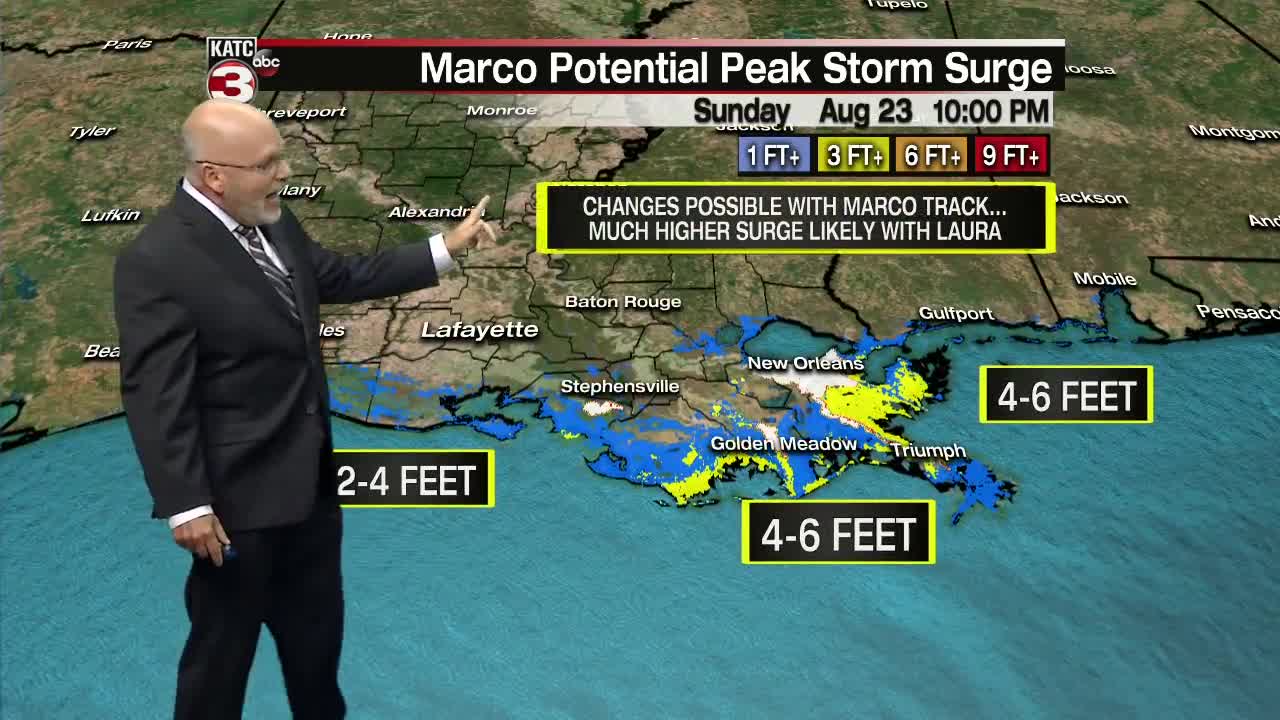 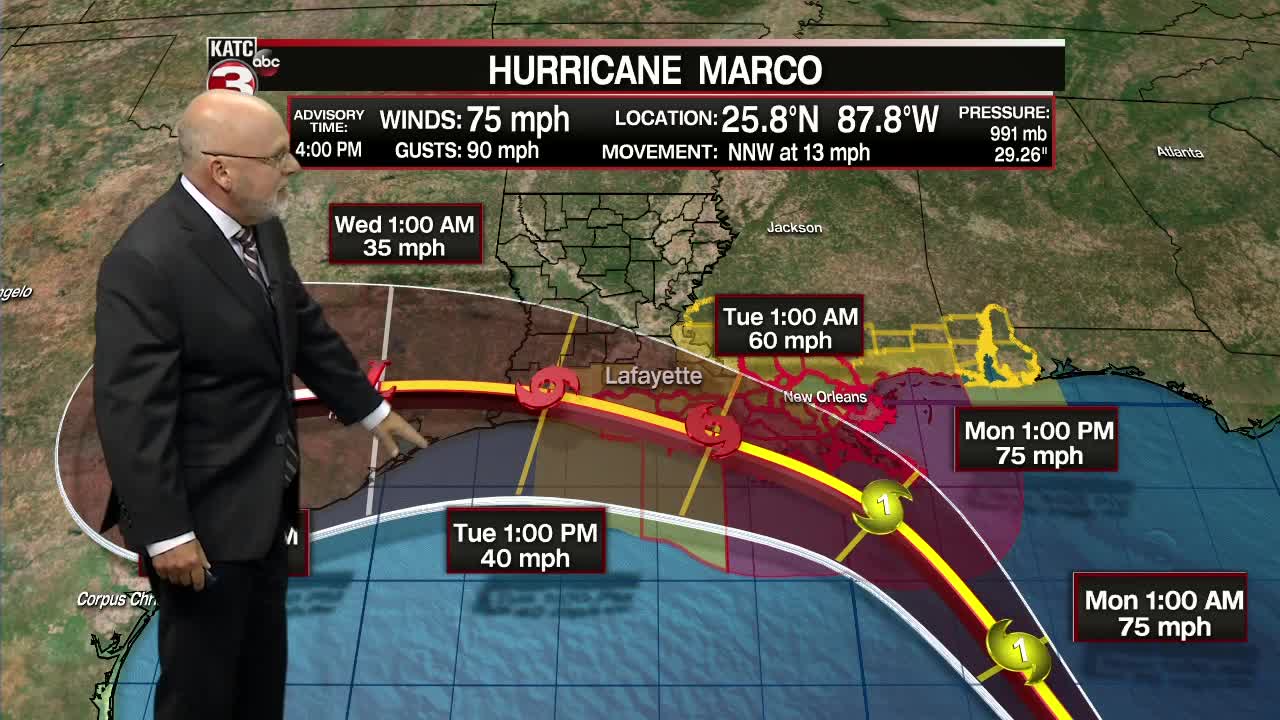 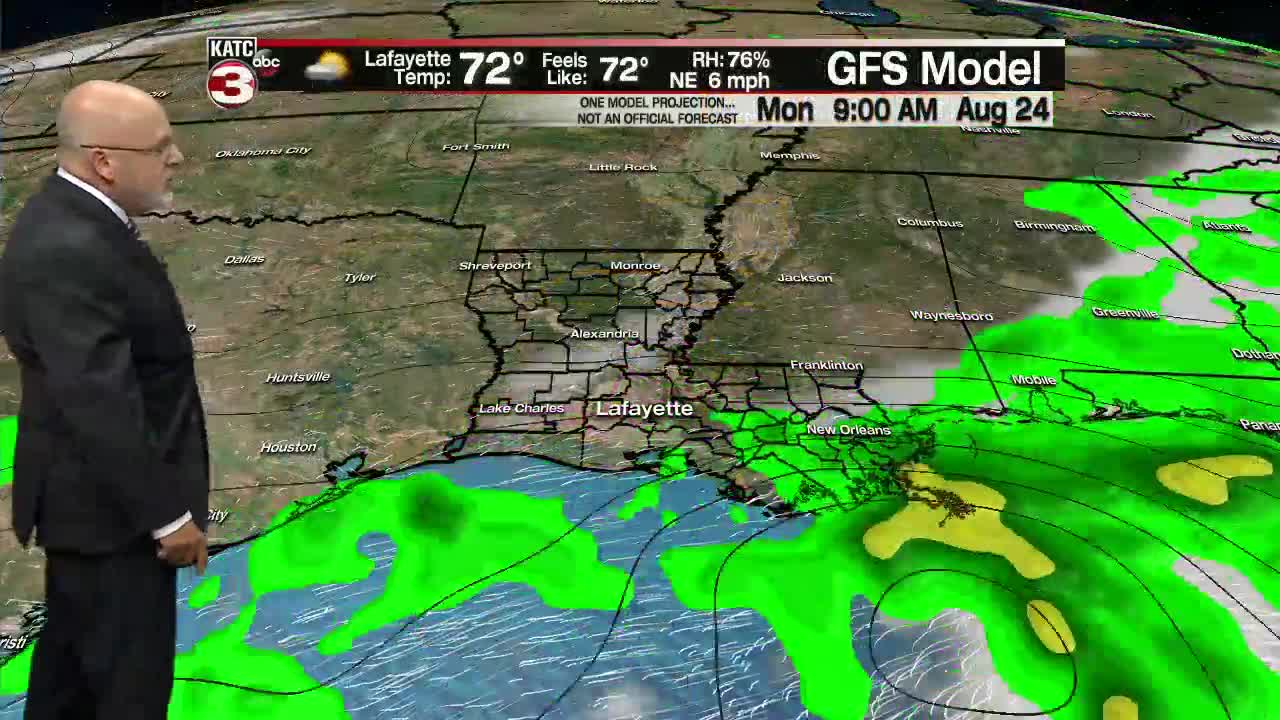 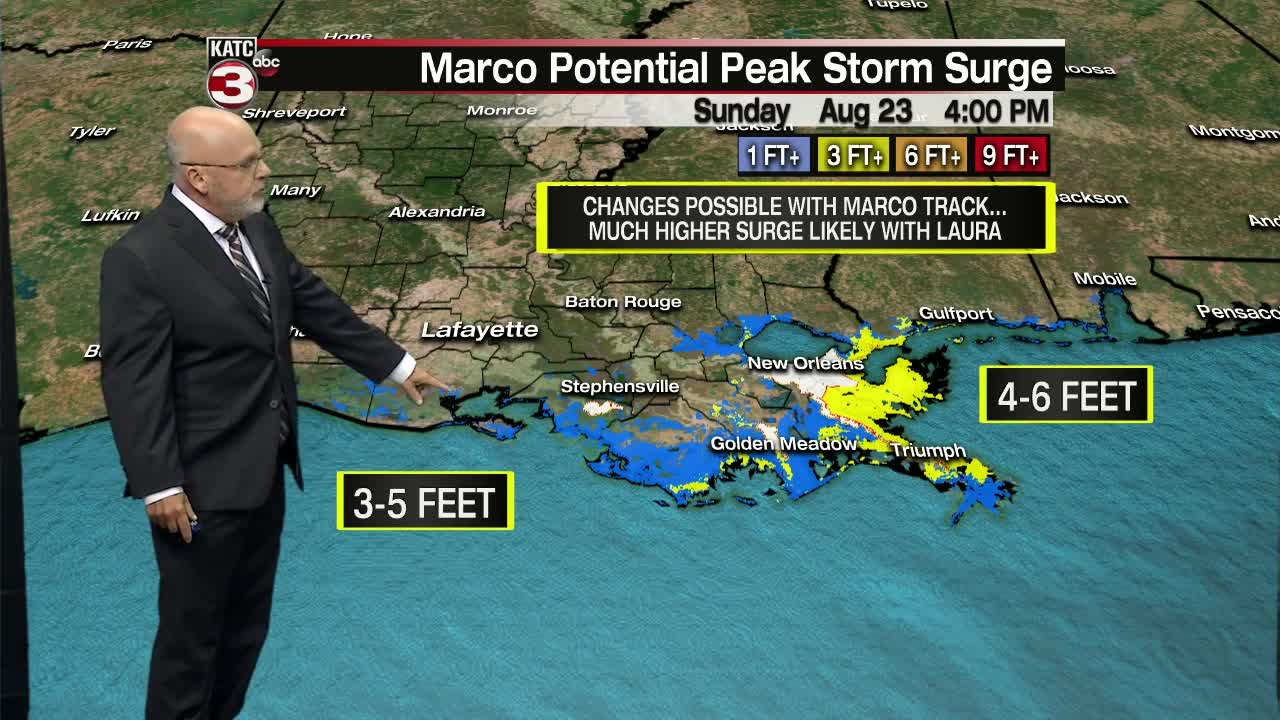 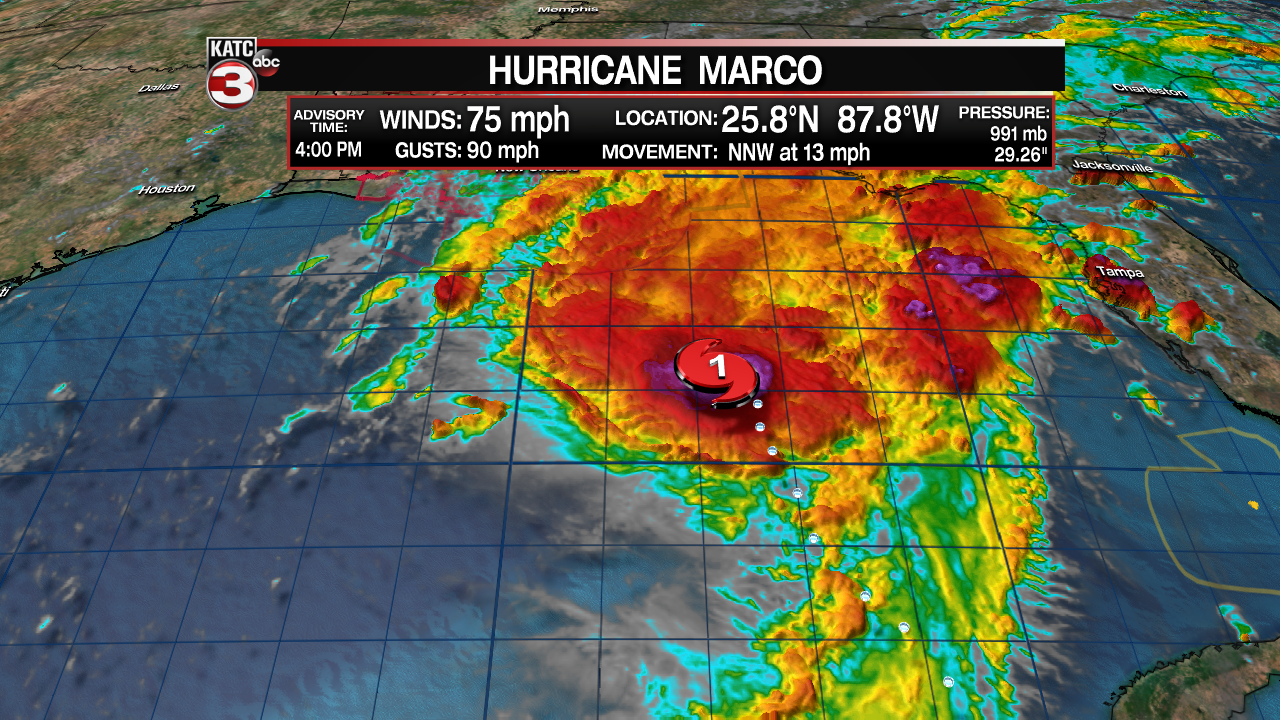 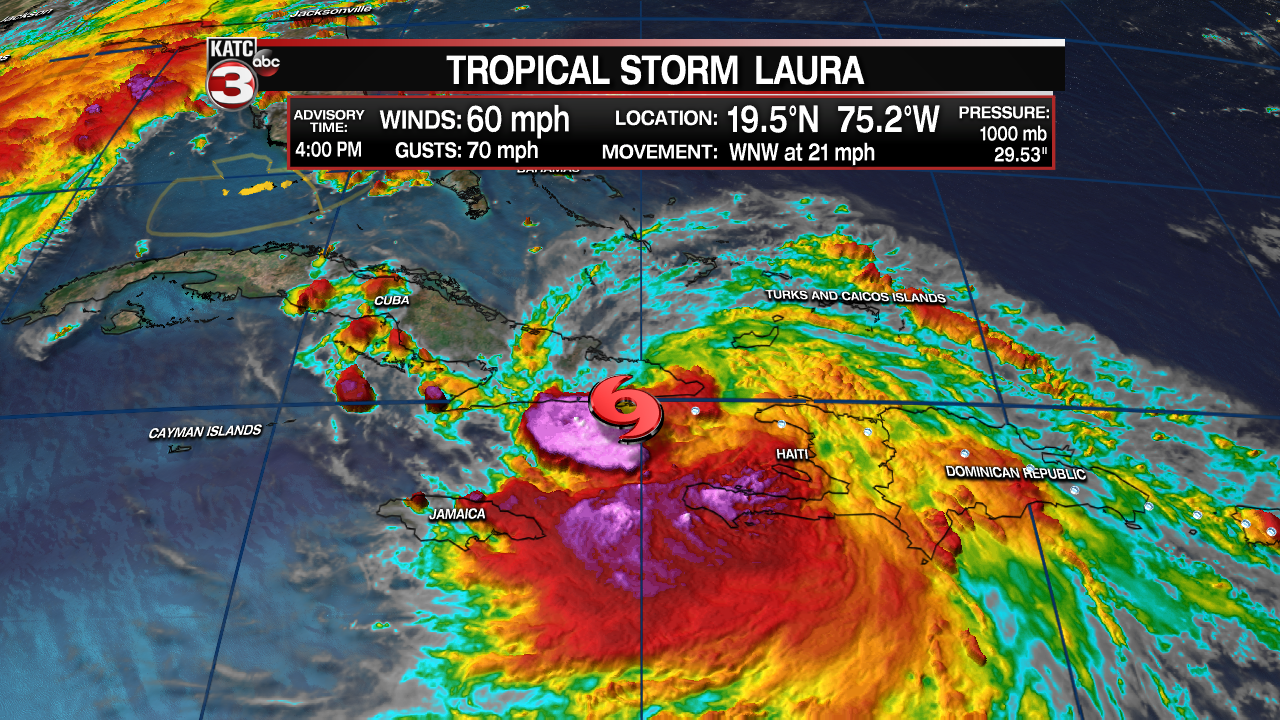 Hurricane Marco and Tropical Storm Laura both continue to pose threats to Acadiana in the coming days.

A Tropical Storm warning is now in effect from Cameron to Morgan City. This means tropical storm conditions are likely within the next 24-36 hours. Hurricane watches also remain in effect for the coastal parishes.

The big news of the day is that Marco strengthened into a hurricane late this morning.

The track forecast continues to take Marco toward the south Louisiana coastline by late in the day on Monday making landfall as a tropical storm. Further strengthening of the system is not likely due to an unfavorable shear environment the storm is in.

We then expect the storm to make a bend to the west and head toward our general area overnight Monday and into Tuesday.

The storm should gradually weaken as it moves inland and westward, but tropical squalls and breezy conditions can still be expected in Acadiana.

Marco lifts out late Tuesday and all eyes then turn to Laura which will be following right behind on its heels.

Tropical Storm Laura continues to battle land interaction with the Caribbean islands this afternoon which should keep its intensity in check for at least another day or so.

However, once the storm emerges into the Gulf of Mexico, gradual intensification will be likely as it navigates through an environment that has very warm waters and expected low shear.

The hurricane center's track takes Laura through the central Gulf before making a landfall in southwestern Louisiana as a category two storm on Wednesday afternoon/evening.

Keep in mind that the intensity forecast is the trickiest to nail down, so we could be potentially dealing with even a slightly stronger storm by then.

Here's the updated thinking on the different impact specifics we could see here in Acadiana through this week.

Highest surge would likely come with Laura, but we still are expecting tides to increase with Marco as well.

Important to note that these numbers are subject to some change as the forecast continues to come into better agreement.

Now is the time to be prepared for two land falling systems along the Louisiana Coast in the coming days, and keep in mind that they will occur back to back. The KATC storm team will be with you all the way, so make sure to keep it tuned to us on TV3 and on all of our streaming devices.