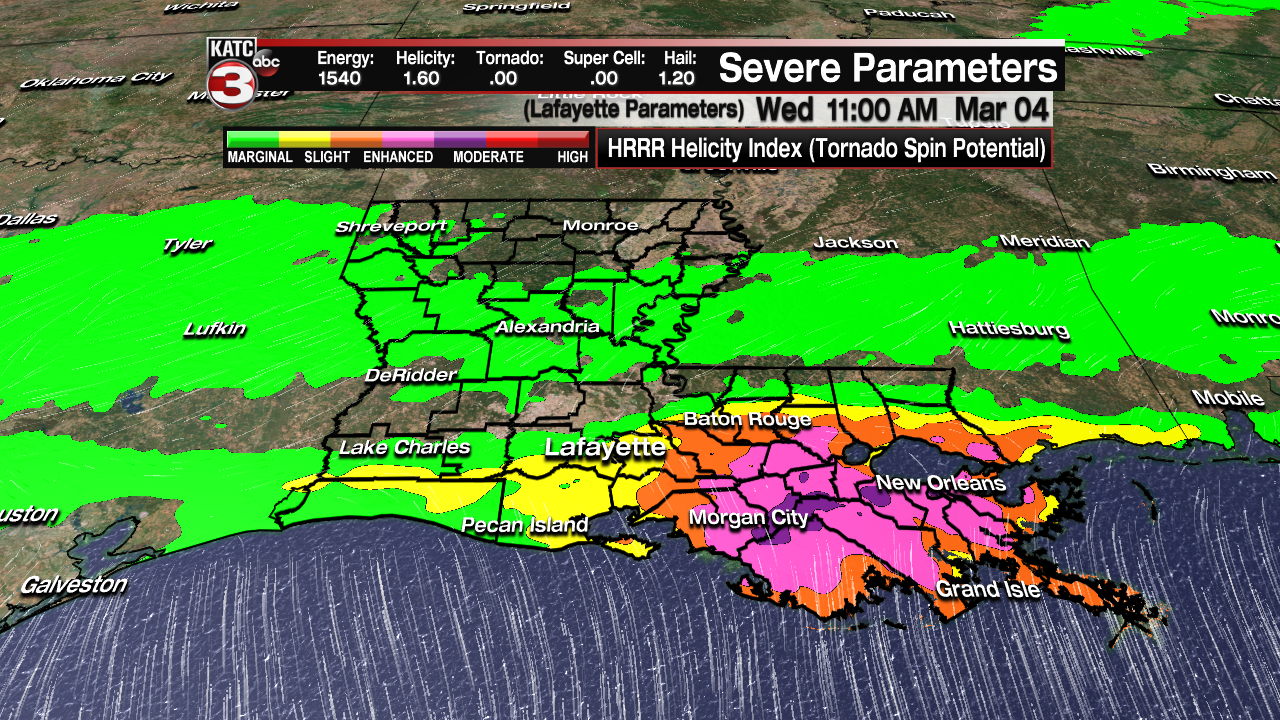 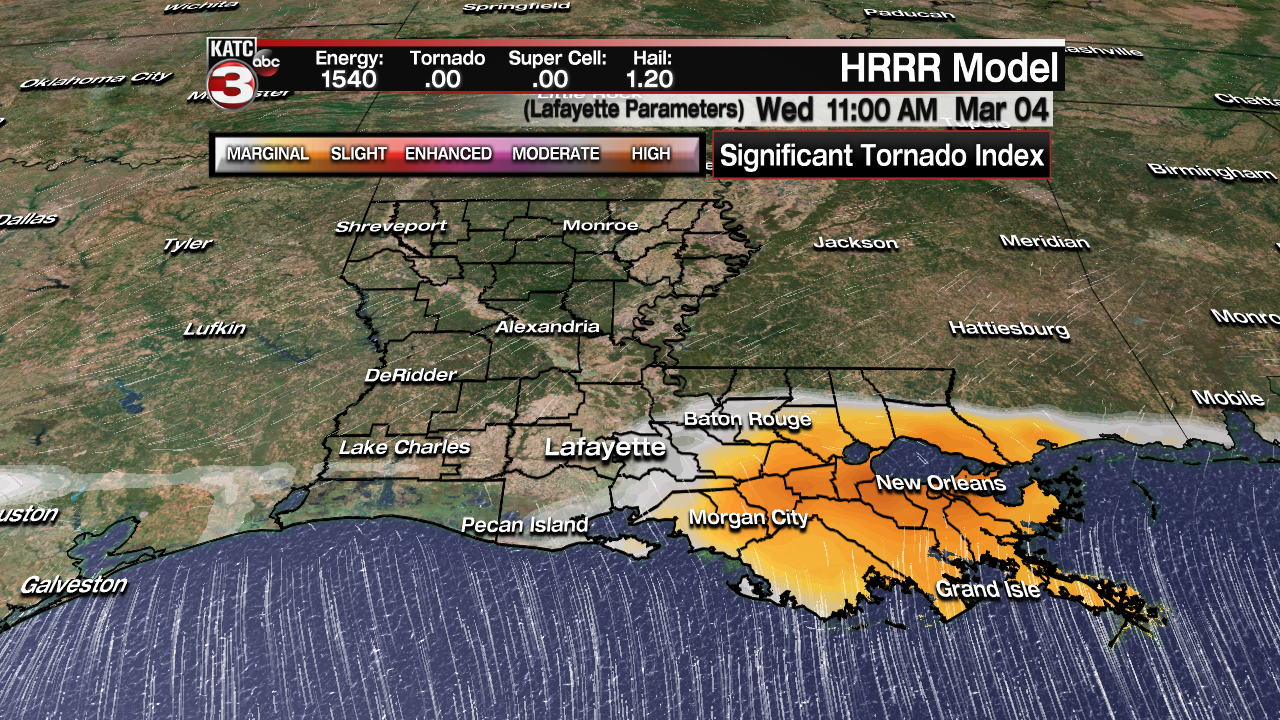 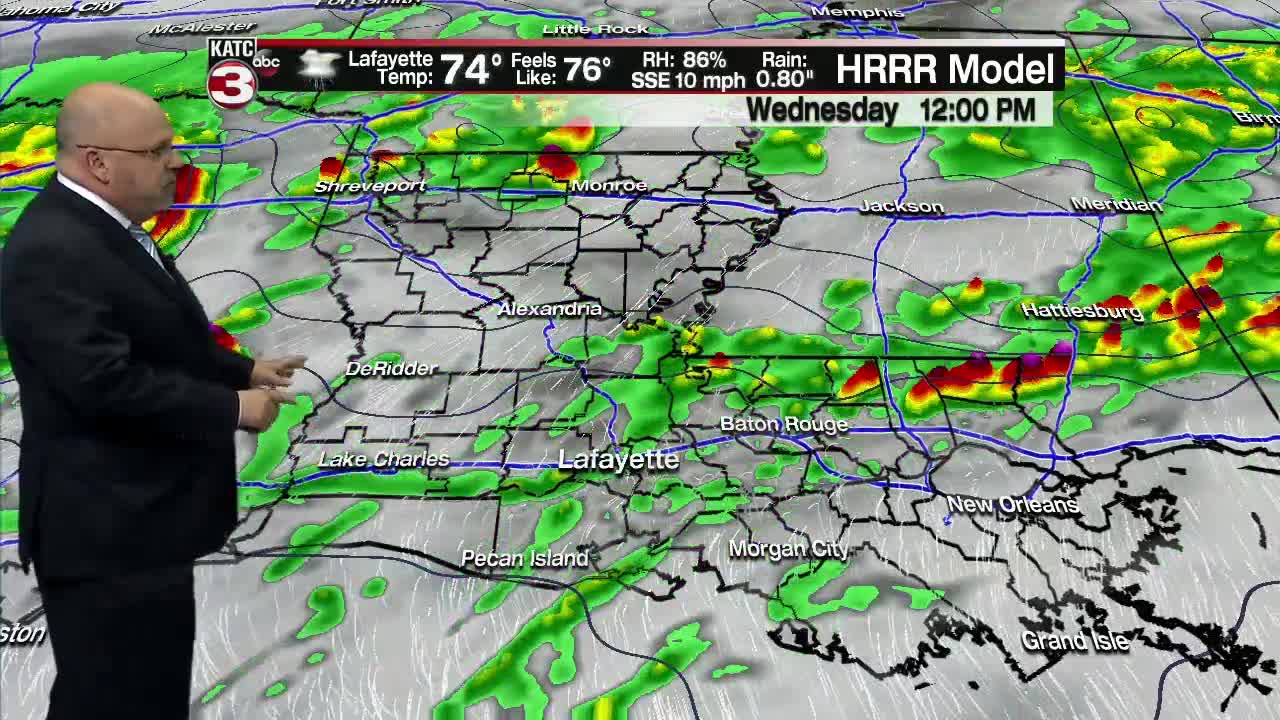 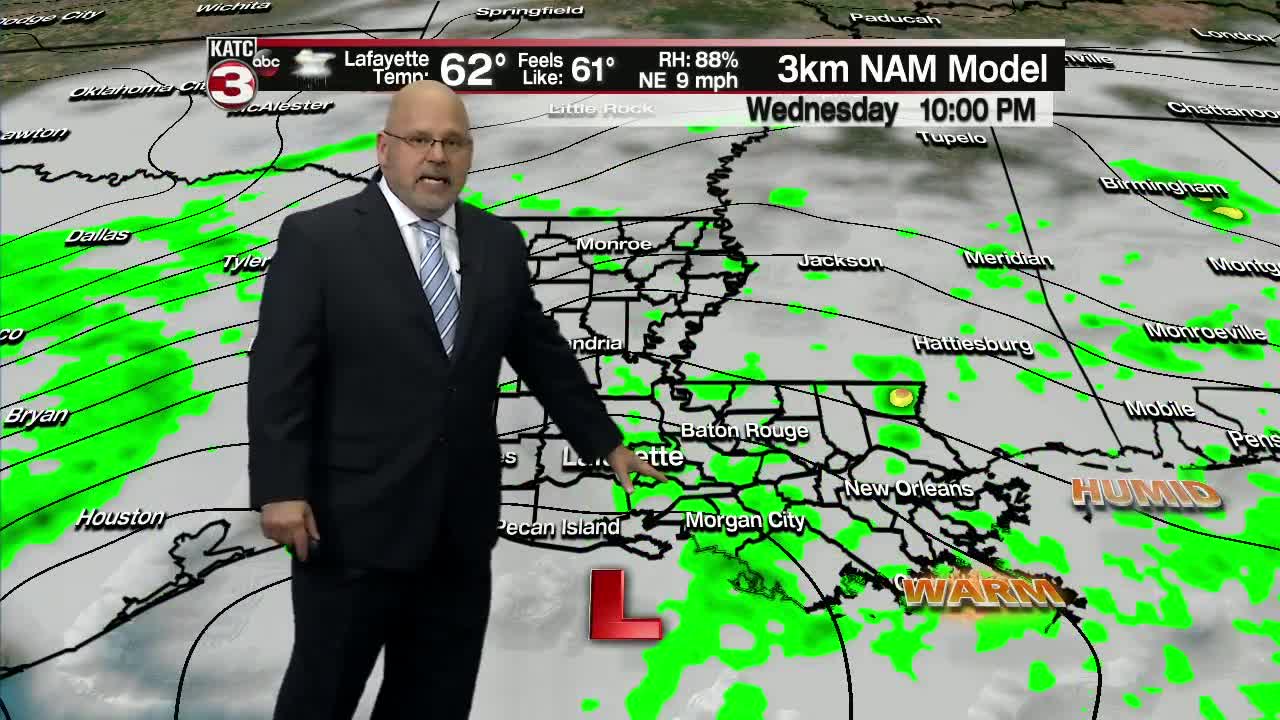 A low pressure system that will traverse eastward along the Louisiana Coast Wednesday will produce an excellent chance of showers and storms for Acadiana, and the slight chance of a few severe storms.

In the near term, expect mild and humid conditions overnight through Wednesday morning with a 40% chance of scattered showers and perhaps, even some sea fog creeping inland toward morning.

Shower and thunderstorms activity will likely increase across the area from late morning into the afternoon hours Wednesday with showers gradually tapering into the evening.

The Storm Prediction Center has all of Acadiana hatched in for a slight risk of severe storms Wednesday, with an "all-mode" threat possible, including the possibility of damaging winds, hail and a few isolated tornadoes.

The highest risks (near 15%) will be for damaging winds and hail, while the risk of an isolated tornado will be closer to 5%.

Per KATC's model data, the specific tornado parameters for the area tomorrow show the best "helicity" (spin potential) and significant tornado risk centered closer toward Southeast Louisiana (including St Mary Parish) during the late morning into the early afternoon period...that's IF there are storms present at that time.

These tornado metric are considered lower end values, but there is certainly not a zero chance something might develop.

And just a reminder...Nashville was under a slight risk of severe weather Monday night, and a devastating tornado there was responsible for widespread damage and at least 22 fatalities.

So take this threat seriously, and don't be surprised if portions of Acadiana might be under a tornado "watch" at some point during the day.

The most significant threat of severe weather should end by early Thursday evening, but some lingering storms may still be capable of producing hail into the early Wednesday evening period.

Fortunately for Acadiana, rainfall per model guidance is less robust than previous runs with Euro, RPM and HRRR going for 1/2-1"...I'd still bet on a little more, perhaps an inch or two, but flooding is not a major concern at this time.

Showers will gradually taper around, or just after midnight Wednesday, with lingering clouds, breezy and cooler conditions to start our Thursday.

Clearing will arrive either later Thursday afternoon, or into the evening with fair to partly cloudy skies and seasonably cool temperatures Friday into Saturday.

Clouds should increase (along with temperatures) Sunday ahead of our next chance of showers for early next week.