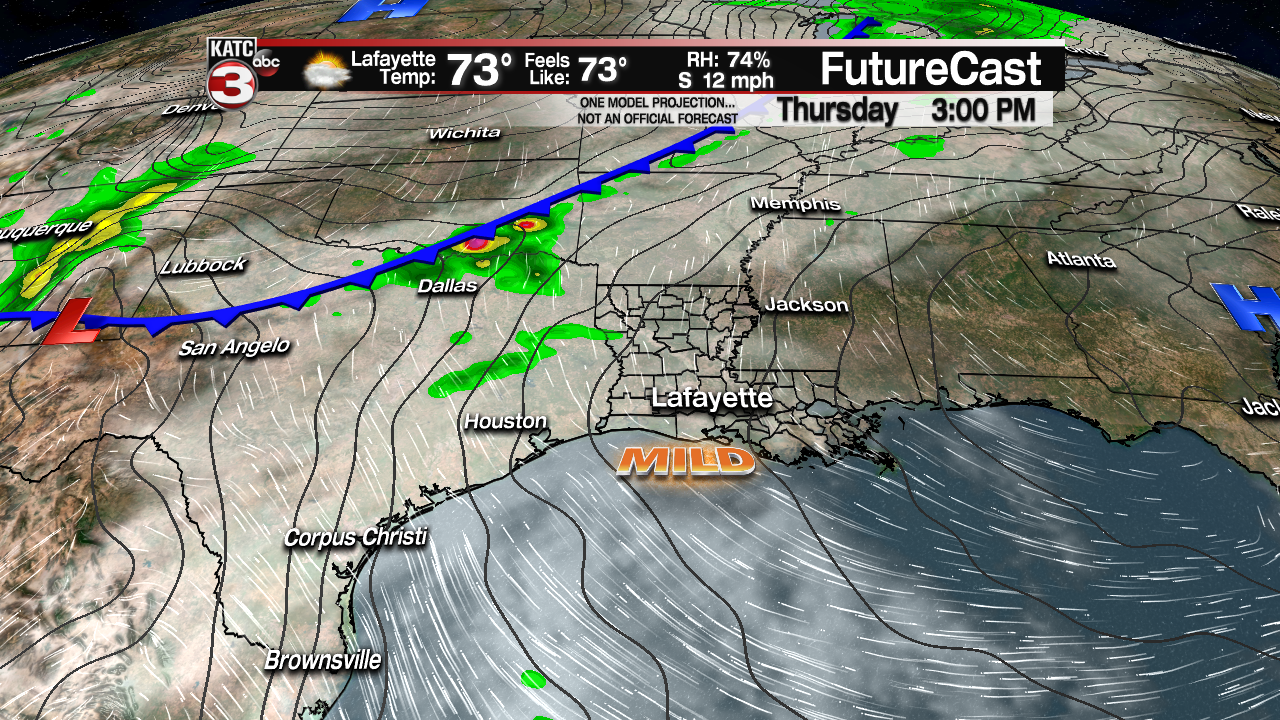 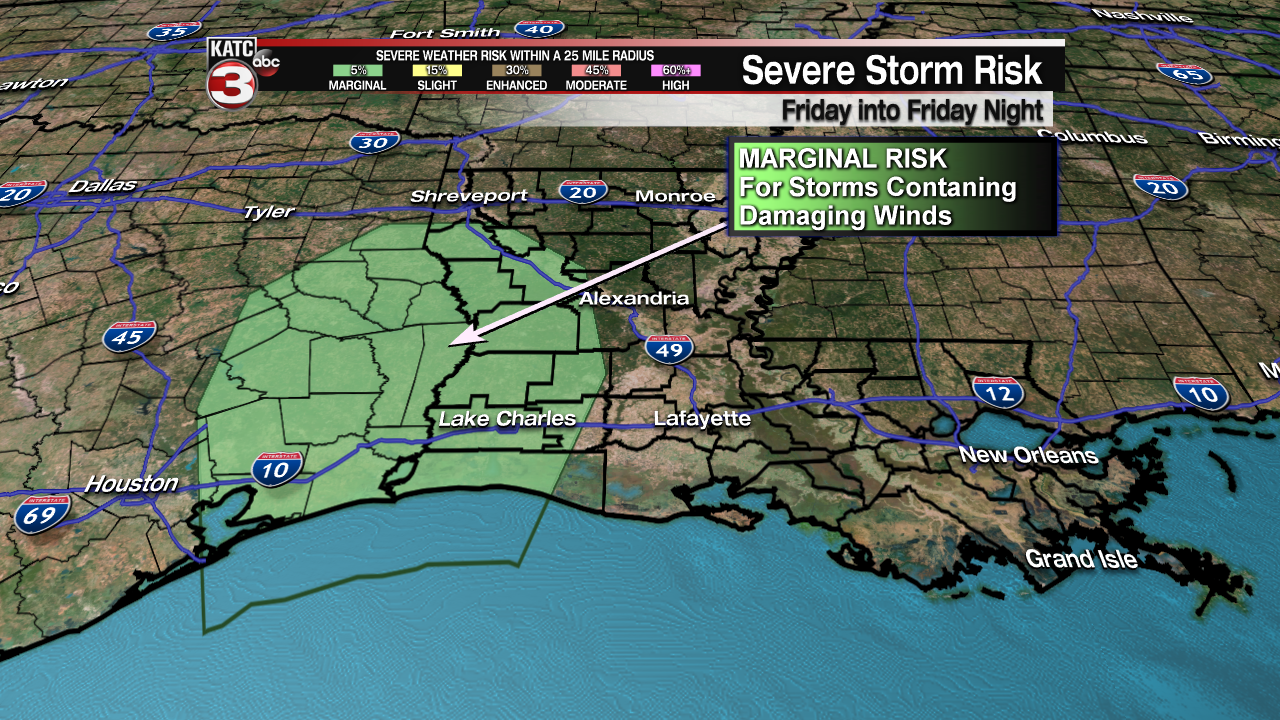 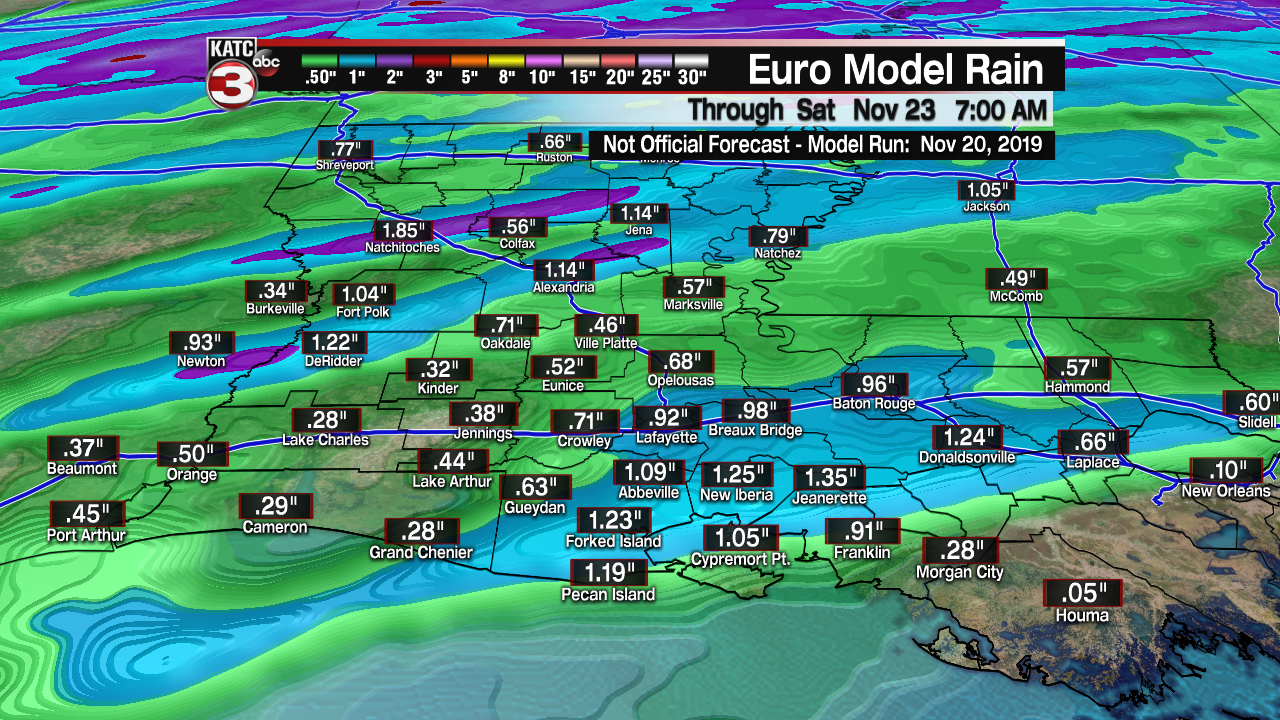 Milder temperatures, especially at night, are on the horizon for Acadiana through Friday before a cool front arrives Friday night.

Temperatures overnight through Thursday morning will likely stay in the 50s as high clouds and breezier east-southeast winds hold temperatures up and keep any fog potential at bay.

Thursday will be another mild day with temperatures topping out in the mid-upper 70s under mostly cloudy skies, but with several intervals of sunshine also expected.

Even milder temperatures are forecast into Friday night as southerly winds off of the Gulf of Mexico freshen, holding overnight readings closer to the mid-60s.

Friday will be another mild day with mostly cloudy skies and the risk (40%) of scattered showers and possibly a few thunderstorms by late in the day.

Rain totals with this system should be less than an inch and a half, with most areas likely to see somewhere between 1/3 and 2/3 of an inch of rain...no flooding issues are anticipated due to the progressive nature of the cool front.

While severe storms are not expected locally, per the Storm Prediction Center (SPC) there is a marginal (5%) risk of a few isolated storms that could produce damaging winds, primarily across Southeast Texas into extreme Southwest Louisiana, which does include Allen and Jeff Davis Parishes on westward in the Acadiana area.

It appears that if a severe storm were to develop, it will be generally west of our area and occur mainly during the daytime heating hours...but we'll continue to watch for this if there are ant threat changes, either way.

High temperatures Friday could approach 80 degrees if a few intervals of sun materialize during the afternoon.

A cool front will cross the area Friday night with showers ending well before Saturday morning.

While there might be some lingering clouds Saturday morning, expect most of the day to become mostly sunny, breezy and cooler with highs topping out in the low to mid 60s.

The weekend overall looks fair and seasonably cool with lows in the lower 40s and highs again Sunday in the low-mid 60s.

The picture for next week has been getting murkier by the day (thanks to model changes and disagreements) with temperatures expected to warm Monday and Tuesday...briefly cool Wednesday with a fizzling front, and then warming back up from Thanksgiving into the rest of the holiday weekend.

But there could be the chance of a few showers just about any an given day late Monday through Saturday at this point...but today there are less signals for any significant weather-makers next week.

Be ready for more changes in the forecast next week, but for now, consult the KATC 10 Day Forecast for the latest.