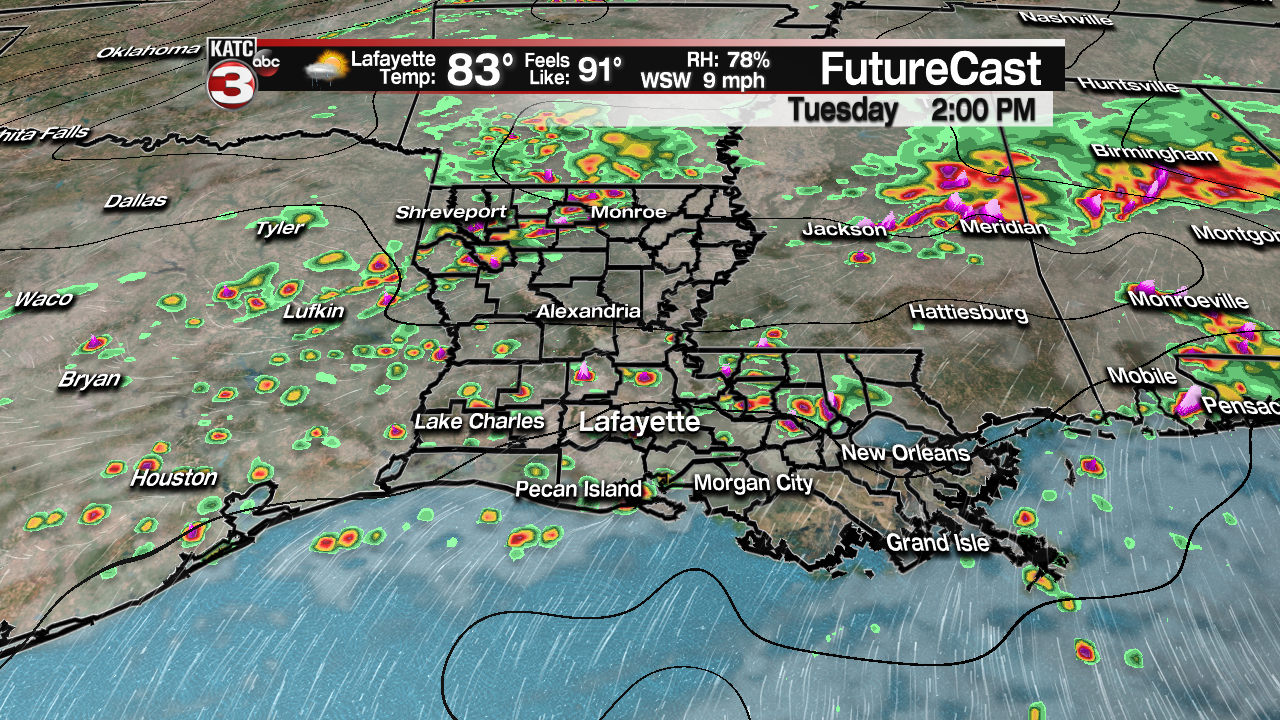 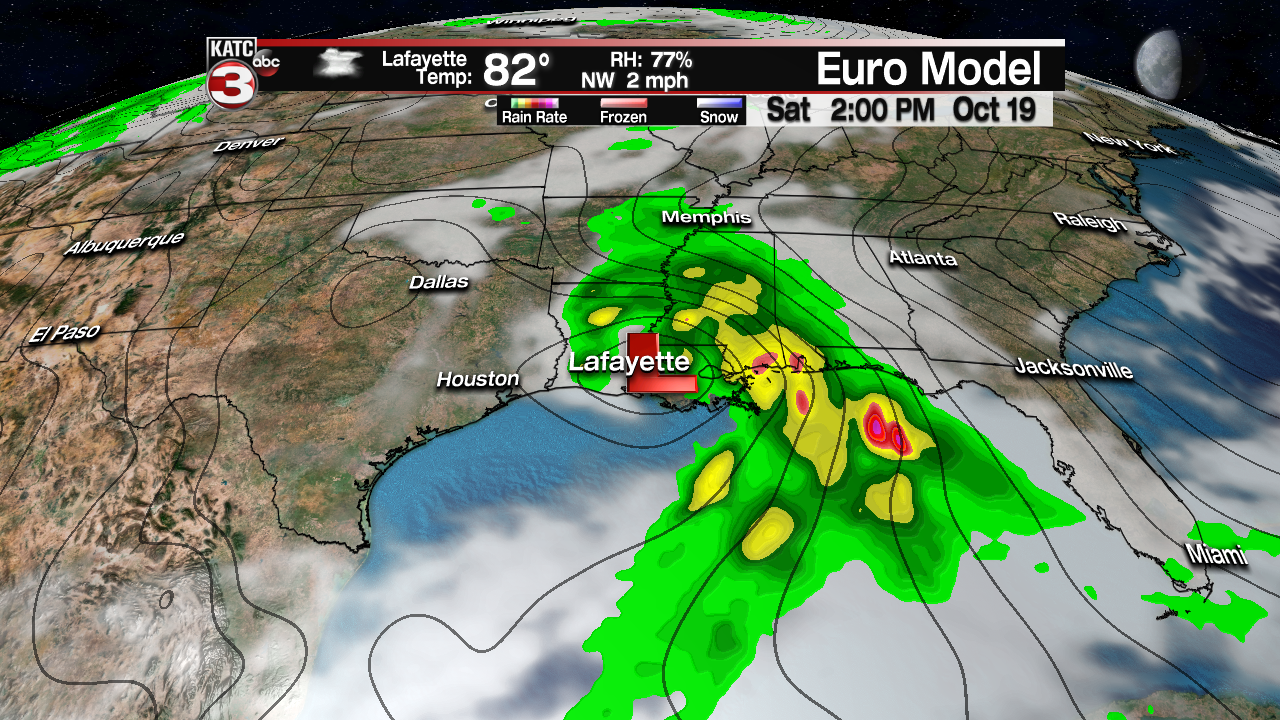 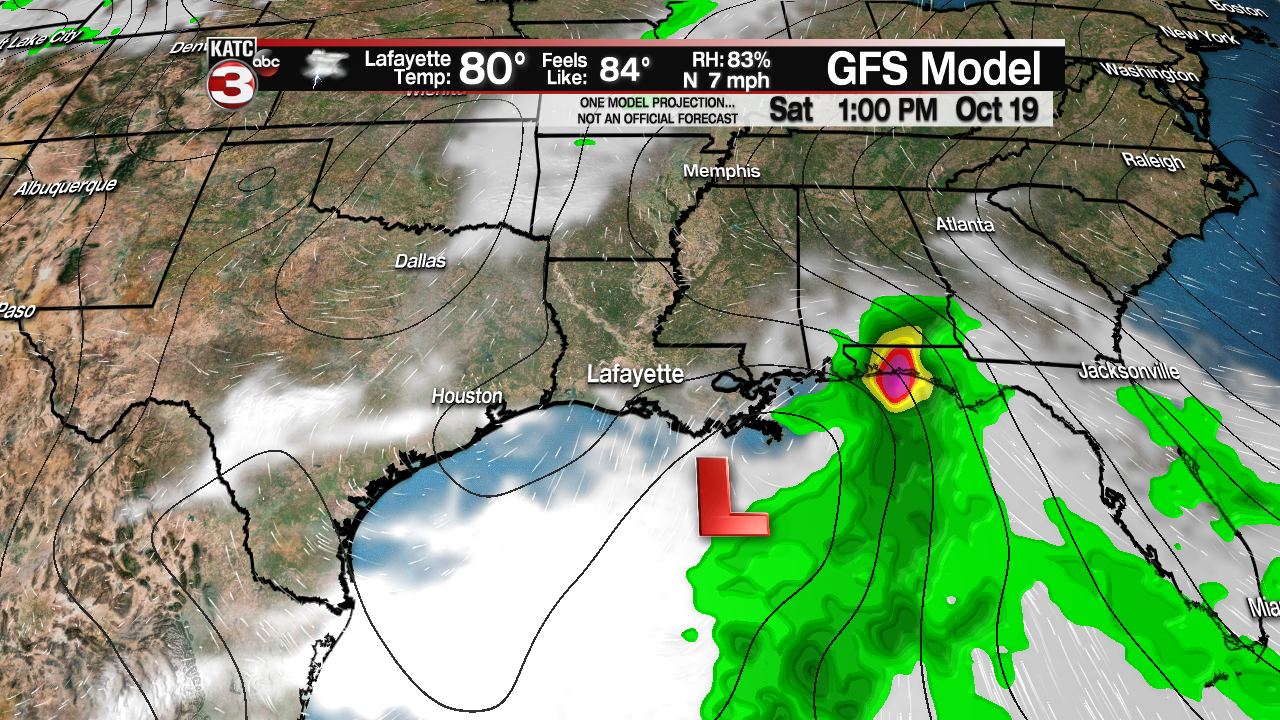 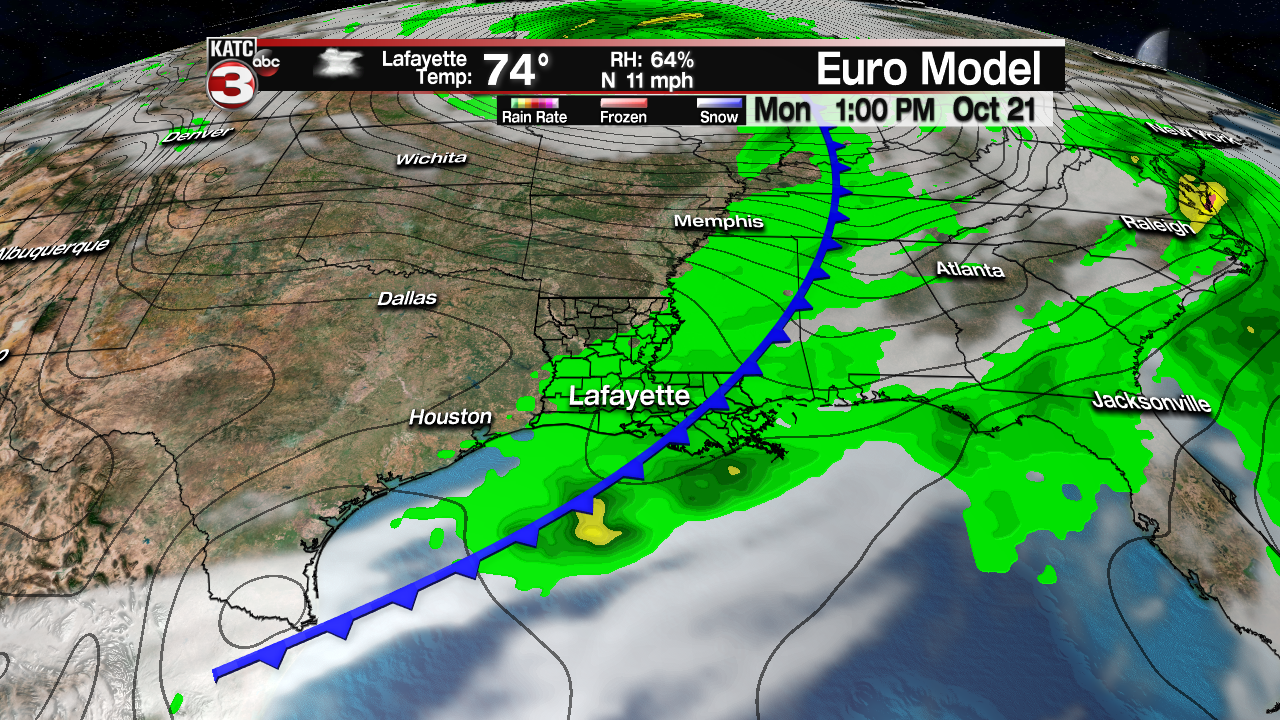 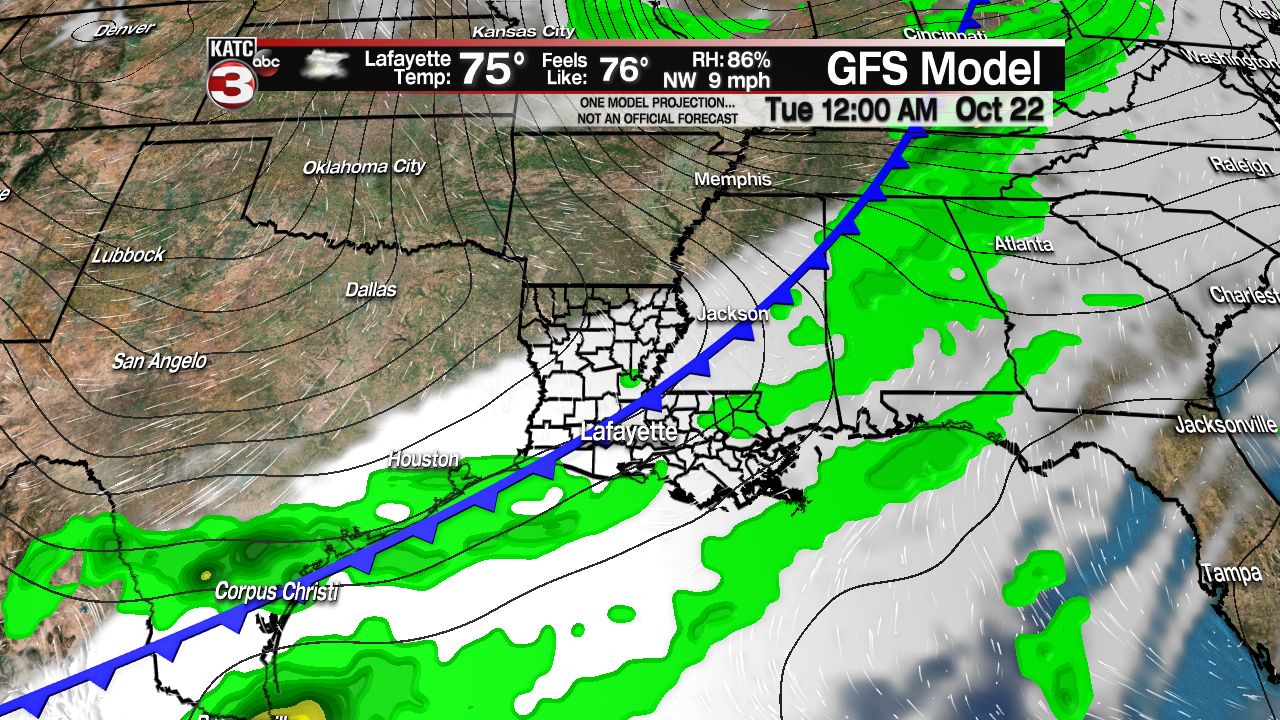 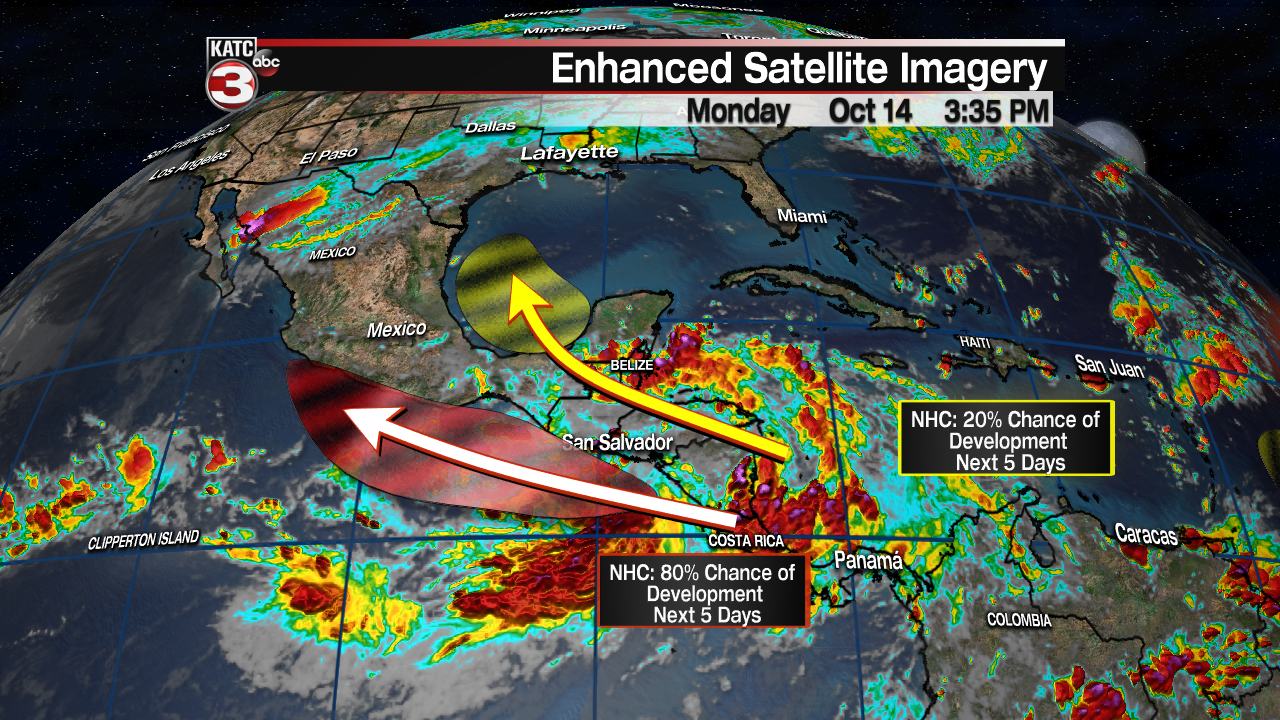 The unsettled pattern is going to stick with us for another 36 hours with several different features sending rounds of showers over Acadiana the next couple days.

Rains gradually tamper off this evening as we are stuck between a warm/stationary front at the surface and a stream of upper level moisture coming in from the Pacific southwest.

More rounds of hit or miss showers and storms develop Tuesday afternoon as a shortwave tracks across the region along the frontal boundary.

Eventually, a strong cold front will dive south Wednesday morning bring a few more showers to the area but behind this front we should clear out for the second half of the work week.

Once the front passes we will see the winds pick up and cooler air slide over Acadiana Wednesday afternoon as highs will only top out in the mid 70s with partly sunny skies.

Thursday morning could be on the chilly side with lows dipping into the mid 50s.

High clouds look to linger over Acadiana on Thursday creating fall-like temperatures in the low to mid 70s.

Friday will be another cool morning with lows in the mid to upper 50s before highs warm into the upper 70s to near 80 under partly sunny skies.

During the late afternoon/evening on Friday some tropical moisture could start heading our way producing a few showers and thunderstorms, especially south of the interstate.

Then this weekend things could get interesting as we will have to watch the southern and western Gulf for the possibility of a tropical wave developing and heading for the Gulf Coast.

The European model has the wave coming right over Acadiana Saturday afternoon bringing scattered showers and storms to the region, but the good news is the heaviest rains look to be farther east from New Orleans to the Florida panhandle.

As for the GFS it has the wave tracking more to the east keeping Acadiana on the dry side with all the moisture stays over Alabama, Florida and Mississippi.

This time of year the easterly track is what climo says but with the Euro still going closer to usthe last several runs I will keep a decent chance for showers and storms on Saturday.

Sunday could be a nice day, maybe a little on the warm or muggy side, with highs in the mid to upper 80s under partly cloudy.

Then on Monday another cold front looks to swing through the area producing scattered showers and storms during the afternoon into the evening.

Behind this front we get another round of nice fall-like weather with highs in the 70s Tuesday and Wednesday and lows in the mid 50s.

Speaking of the tropics things are still quick active for the mid of October.

Tropical Depression 15 has formed off the west coast of Africa and is expected to become Tropical Storm Nestor later tonight.

Nestor when then slide over Cabo Verde Islands on Tuesday producing gusty winds and heavy rains before the systems lifts to the north and slowly weakens and falls apart late Wednesday into Thursday.

Also, the hurricane center is watching a cluster of showers and storms near Honduras and Central America.

There is a 20% chance that part of this system works its way into the Bay of Campeche by Wednesday and could become what we are watching to be our tropical wave by Saturday.

The thing that makes this system interesting is that there is an 80% chance the the main center of circulation from this system tracks into the Eastern Pacific and heads up along the west coast of Mexico.

What we will have to monitor is if the system in the Eastern Pacific steals all the moisture and energy or if enough of a disturbance is able to develop in the southern Gulf and can become something that then heads towards us.

Thus, it's going to take a couple days to find out what ends up happening with this system to know for sure what we could see in Acadiana.

Keep in to KATC for the latest as we track where this moisture and system ends up going and what it eventually means for us.