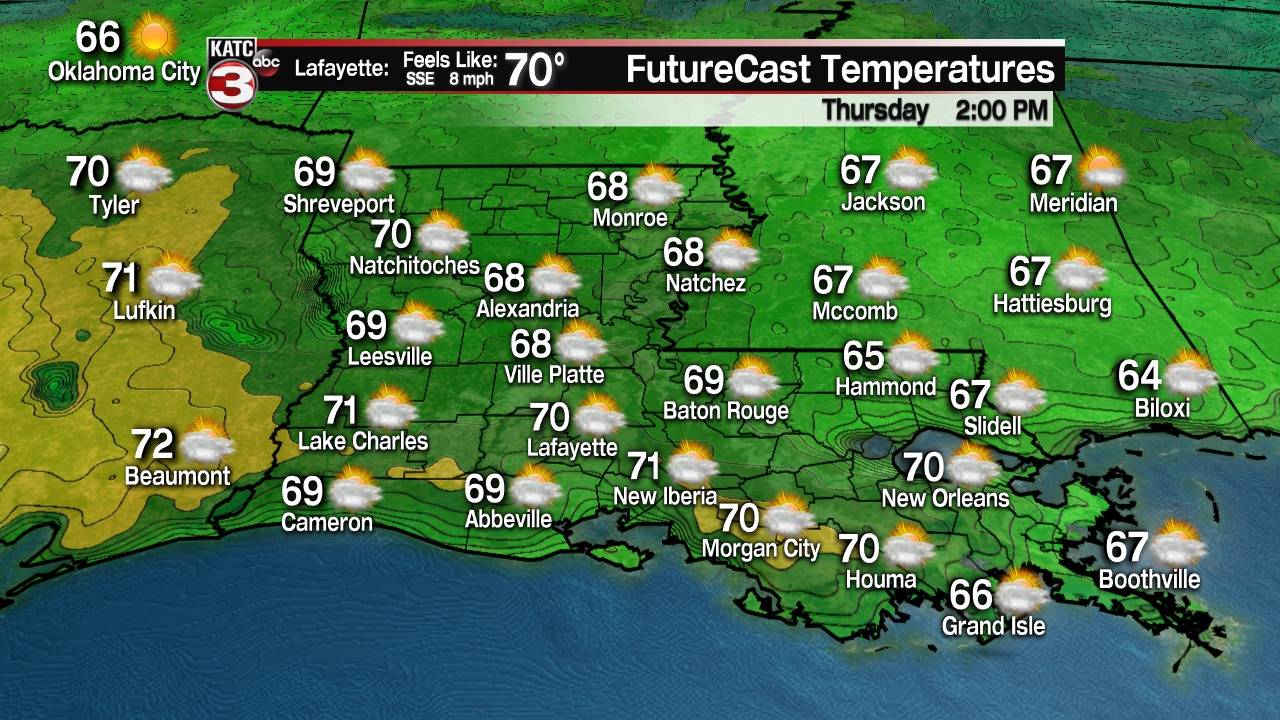 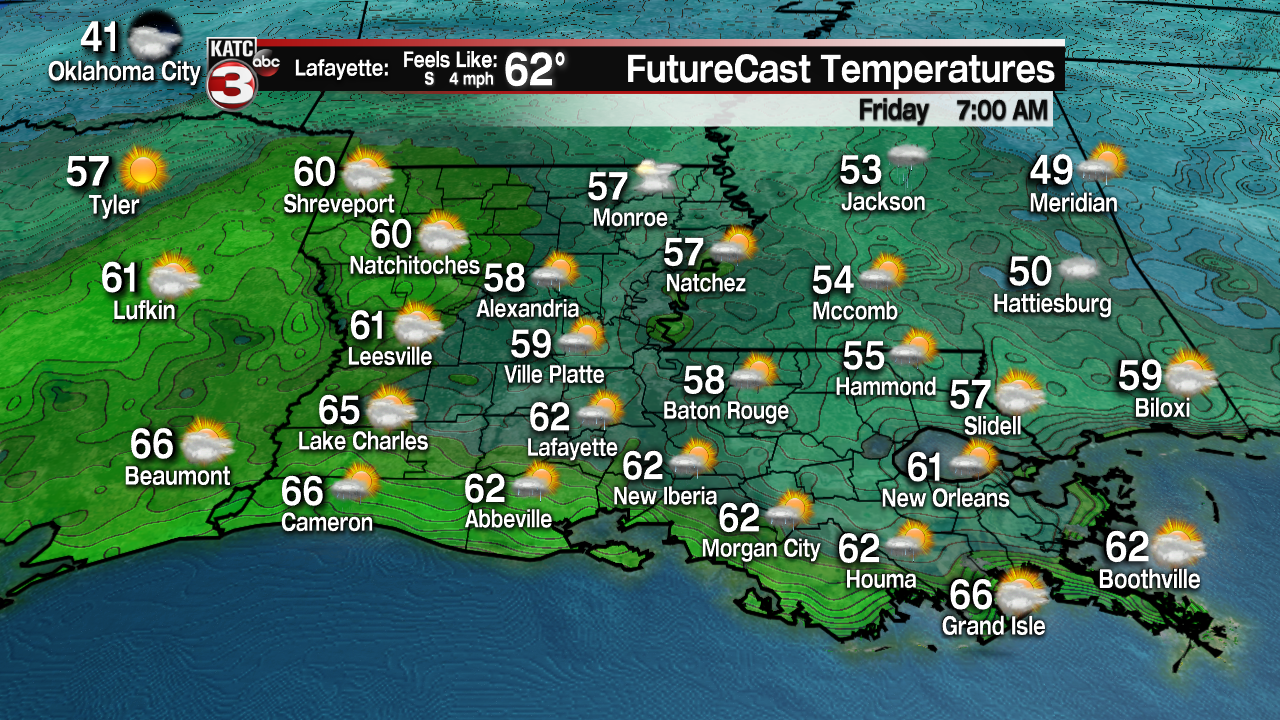 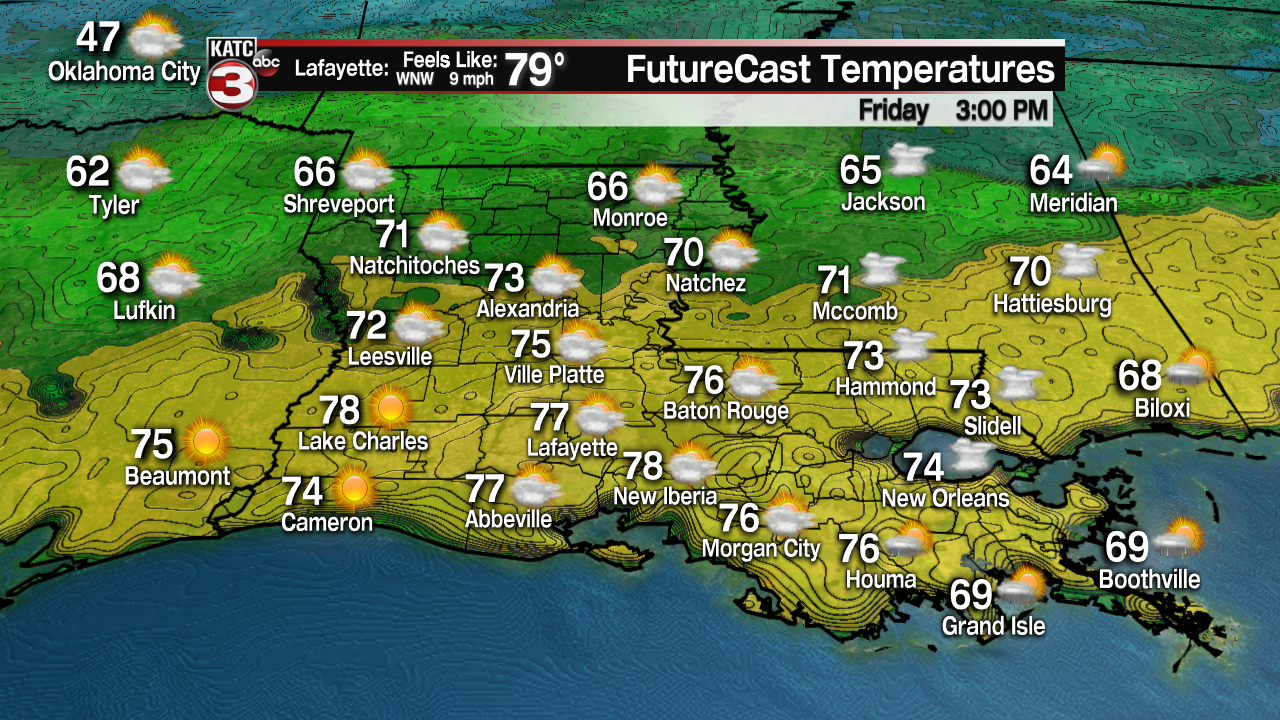 Acadiana will get to enjoy another pleasant December day Thursday with mostly sunny skies accompanied by mild temperatures topping out in the upper 60s to lower 70s.

After some patchy morning fog Thursday, look for a sun and mostly high cloud mix Thursday with temperatures starting in the seasonable low to mid 40s and topping out a few degrees above the normal of 67 for the afternoon.

Winds will gradually turn southeasterly Thursday and more southerly into Thursday night which should hold our temperatures closer to the upper 50s to lower 60s for overnight/morning lows.

A weak area of low pressure and a frontal boundary is expected to drift southeastward across Louisiana Friday allowing for scattered showers across Acadiana primarily during the morning hours.

Although rain chances will be near 60% early Friday, activity should be scattered in nature and generally quite light, with less than a tenth of an inch expected area-wide.

Temperatures Friday will likely top out in the mid-upper 70s but cooling conditions are expected into Friday night and the first part of the weekend.

Skies are not expected to completely clear with partly to mostly cloudy skies Saturday accompanied by temperatures topping out closer to the low-mid 60s.

Sunday should be a little milder with a return of southerly winds and have a little more in the way of sunshine with highs back near 70 degrees.

Next week is expected to become more active and changeable but with that being said, there is very little model consistency of late.

The bottom line, at least the chance of showers will be in the forecast Monday through Wednesday and could last into Thursday as a series of disturbances and a wavy frontal boundary could persist across the area.

See the KATC 10 Day Forecast for the latest, but know there will very likely be changes in the forecast next week and they may be for wetter conditions rather than drier.