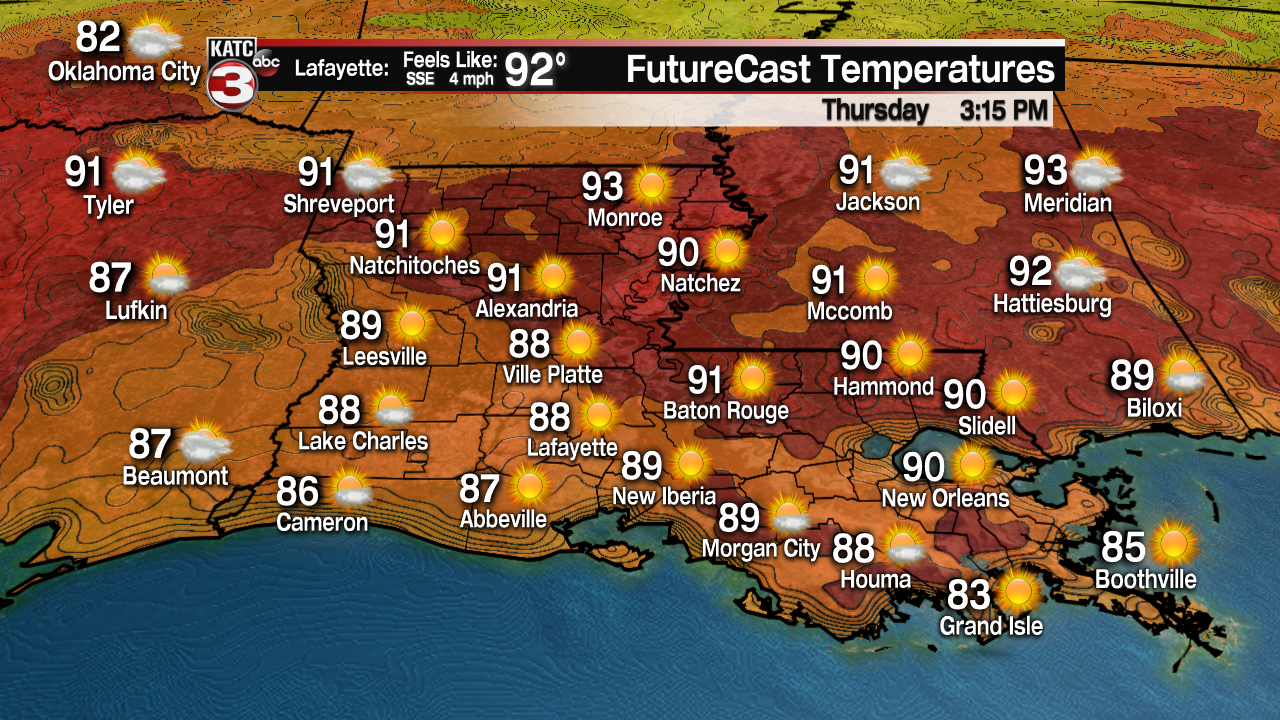 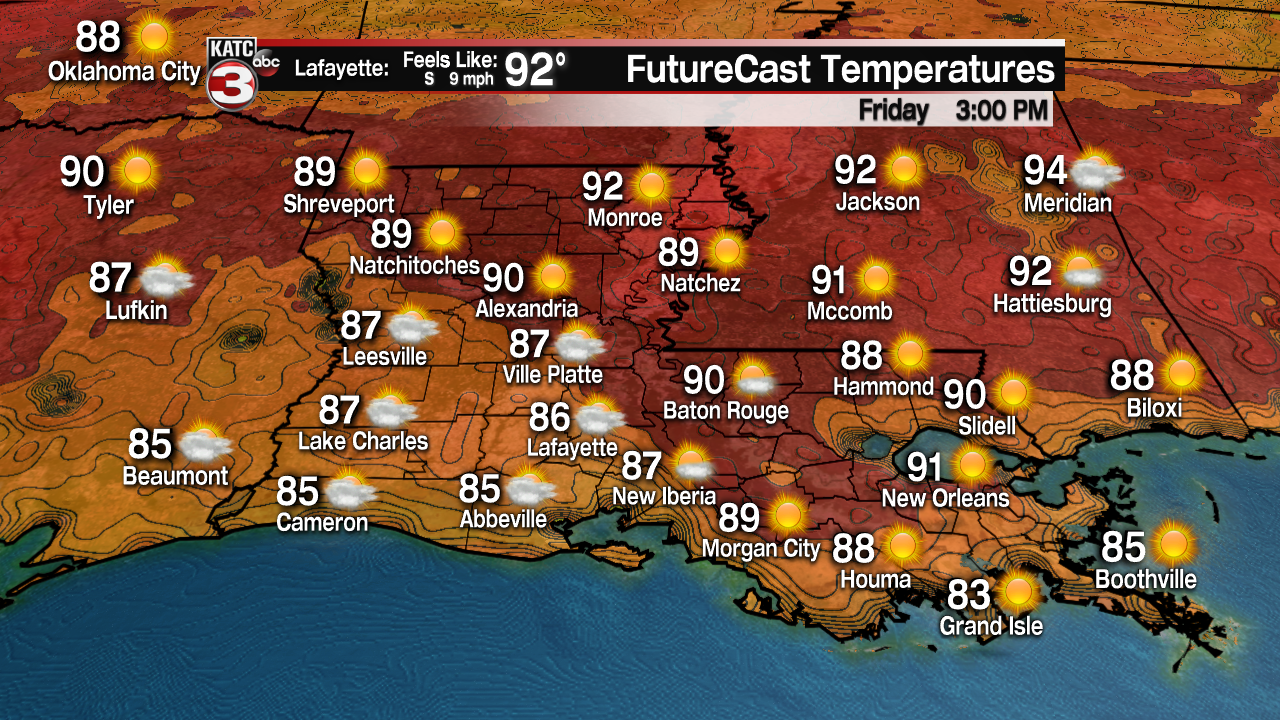 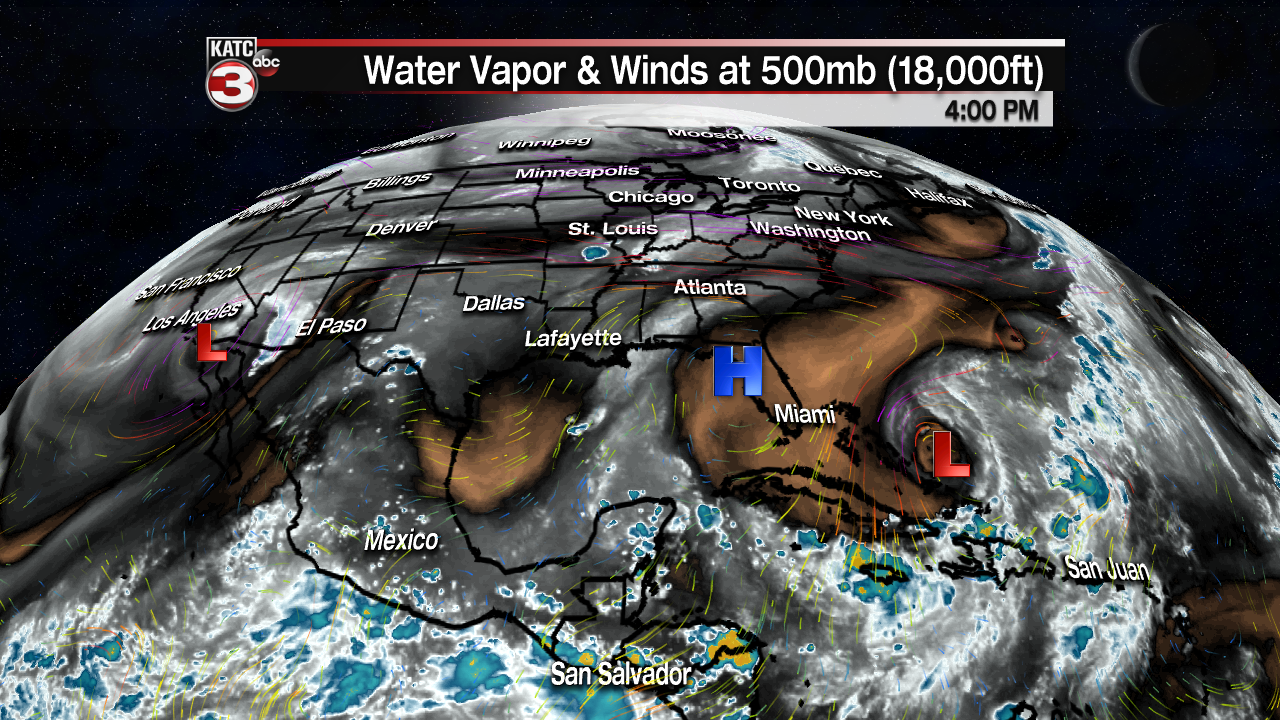 Acadiana's nearly endless dry summer pattern will continue into the weekend and well into next week while the tropics stay active.

High pressure anchored over the Southeastern U.S and Gulf of Mexico is expected to budge very little over the next week keeping mostly sunny and warmer than normal days going while night-time lows hold in the "almost pleasant" upper 60s to lower 70s.

Daytime highs will continue in the upper 80s to near 90 over the next several days.

Rain chances will stay near zero through Thursday but could get up to 5-10% Friday into Saturday as a very weak tropical wave in the Southern Gulf moves toward Mexico later this week and into the weekend.

Some of the moisture with this wave may squirt up toward the mid-upper Texas Coast Saturday (see Euro Model Moisture forecast below or above), but high pressure is expected to shunt the brunt of this moisture back to the west of Louisiana.

Thereafter, into Sunday the ridge of high pressure is expected to amplify through early next week, more than likely resulting in slightly hotter conditions with afternoon highs pushing well into the lower 90s.

The tropics remain active, but not threatening to anywhere in the U.S. over the next week.

The major players in the Atlantic, starting from east to west include strengthening Hurricane Lorenzo in the Eastern Atlantic and weakening Tropical Storm Karen north of the Caribbean.

Lorenzo with 90 mph winds Wednesday afternoon is expected to become a major hurricane Thursday, but very likely will curve into the open Atlantic with no threat to land in the Western Hemisphere.

Farther west, Tropical Storm Karen was downgraded to a 40 mph storm will be moving northward to a certain stop and perhaps loop as it bumps into the Bermuda Ridge of high pressure.

The National Hurricane Center (NHC) is now forecasting a more limited future of this system with a possible loop back to the west in the 3-6 day time-frame...beyond then, the deterministic computer models minimize this feature while latch and key on to the upper low that is northwest of Karen.

While this upper low is expected to head for the Gulf of Mexico, it will initially come with very dry air aloft, but the same upper low could permit a few things:

1-It could ultimately drag deeper tropical moisture into the Gulf in the week to 10 day time-frame...

2- It could allow for a more favorable area for tropical development in the Western/Northwestern Caribbean (which has been very quiet so far this year)...

3- If Karen remains a viable system in a week's time, the upper low could pave the way and perhaps draw the system toward the Gulf of Mexico.

It should be noted, while upper lows usually don't become tropical systems, Tropical Storm Imelda just a couple of weeks ago, was born of an upper low in a very tiny window, and we all know how that played out.

So for now, we'll just keep an eye on these features and enjoy our fair, but very warm weather pattern into the first week of October.

As for any cool fronts...the long term models hint at the possibility of one into the second week of October...but we can't get our hopes up quite yet, but one has to come before the end of October!

And general the rule of thumb: it takes more than one front (and the brief increase in upper level winds that comes with a front) to shutdown tropical season for our part of the Gulf of Mexico...but for now...we'll just enjoy the ride down from the peak of hurricane season and keep our fingers crossed!