More summer heat, but some limited relief in sight

More summer heat, but some limited relief in sight 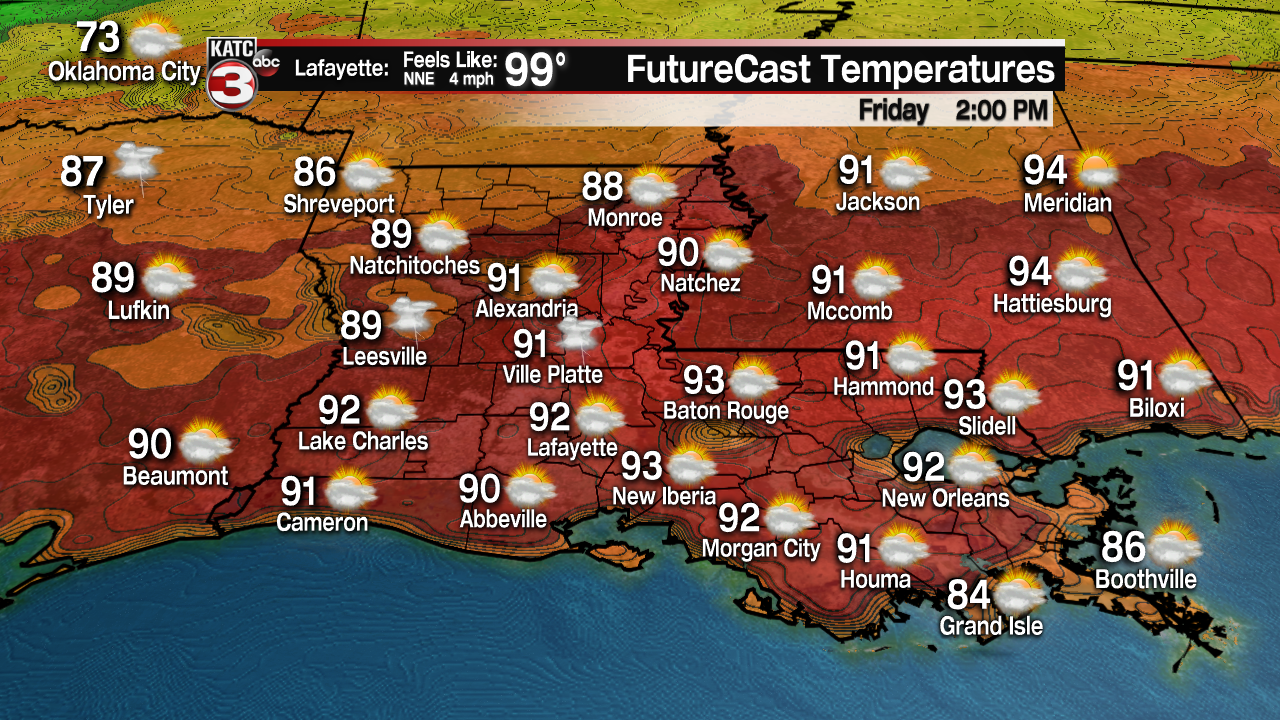 Acadiana's seemingly never-ending summer pattern will continue through this weekend, but the first front of the fall season is still on schedule for Monday, although current projections are not as cool behind the front for mid-next week.

But wait, there's more...a secondary cool front could arrive in the area toward the end of next week bringing in even cooler temperatures into the following weekend.

In the near term, expect partly cloudy, hot and humid conditions to persist Friday, Saturday and Sunday along with the chance of a few scattered late afternoon/early evening showers and/or a few thunderstorms.

Daytime highs will continue in the lower 90s through this weekend with heat indices pushing near 100 Friday, but perhaps levels should not be quite as high for the weekend courtesy of northeasterly winds that could help lower our dew points a touch.

Expect mostly cloudy skies Monday with a fairly good chance of scattered showers along with the possibility of a few embedded thunderstorms...sever storms are not expected at this point.

Temperatures Monday should top out in the low-mid 80s, depending on the timing of the aforementioned cool front, but will drop nicely Monday night into Tuesday into the low to mid 60s.

Tuesday and Wednesday should be mostly sunny and pleasant days, with low humidity accompanied by daytime highs closer to the lower 80s while we squeeze one more night/morning reading in the lower 60s through Wednesday morning.

The latest Euro Model. in relative concert with the GFS Model, is suggesting a brief warm-up Thursday and Friday, with another front reaching the area before next weekend.

For now, it appears that the secondary front could bring our highs down to the mid-upper 70s and lows in the mid-upper 50s next weekend...but as always, the latter part of the 10 Day Forecast will be subject to change.

Meanwhile, in the tropics, the National Hurricane Center continues to monitor broad and disorganized low pressure near the Yucatan Channel, but this feature continues to have a low chance of development, and even so, the feature is expected to remain planted somewhere in the Bay of Campeche to near the Yucatan Peninsula or even the Northwest Caribbean for the better part of the next 10 days.

This part of the the tropics will likely be monitored for a developing system for a good part of this month...but for now...no tropical worries, and that's a great thing to say when we are in the month of October...except when Gulf temperatures remain above normal.