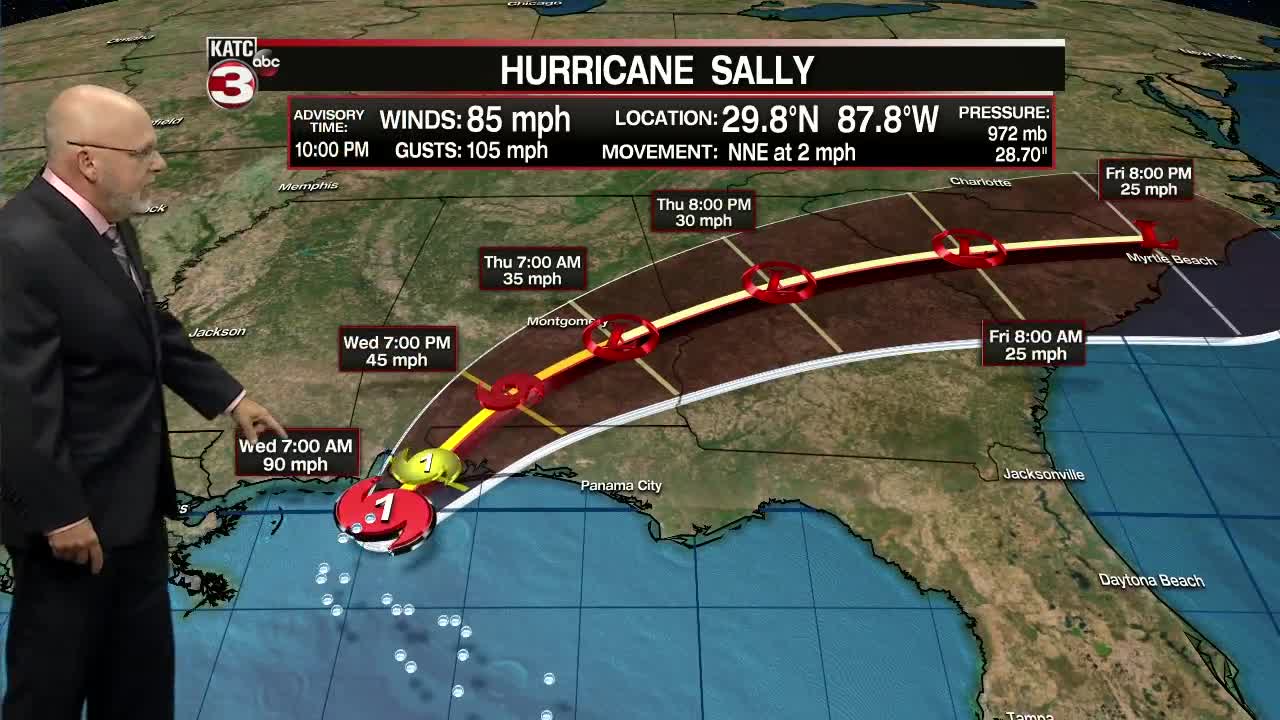 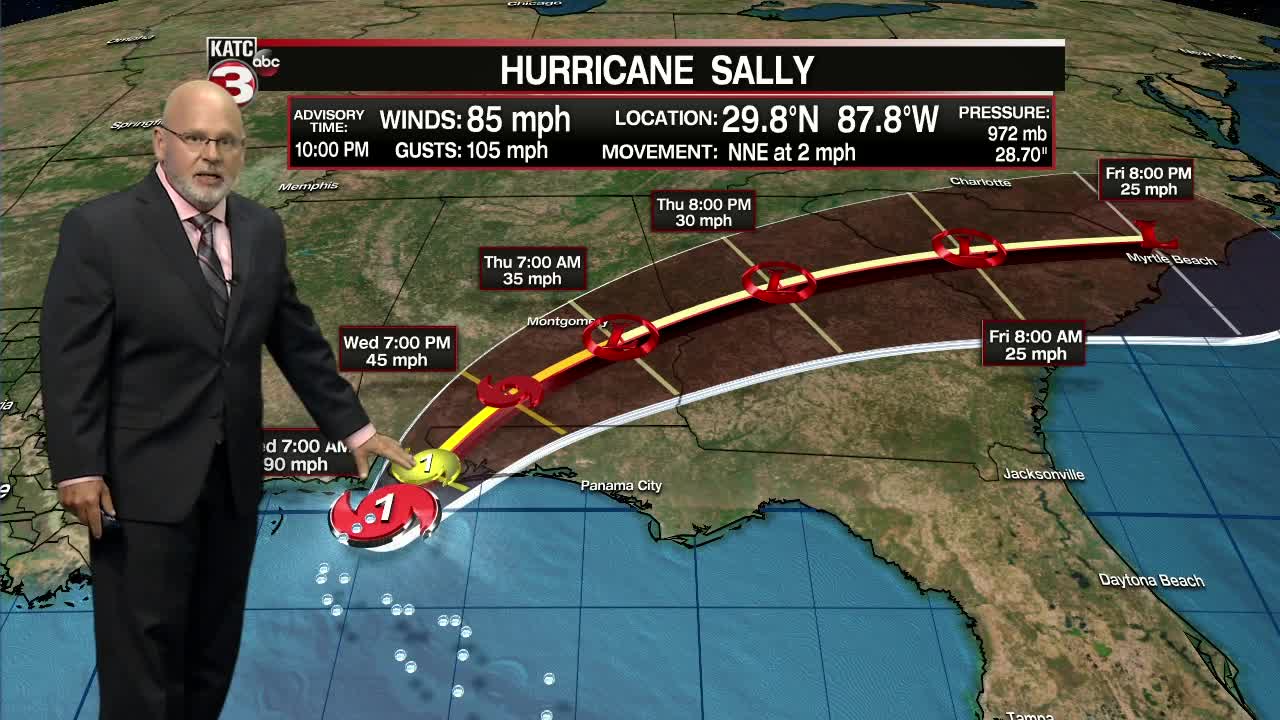 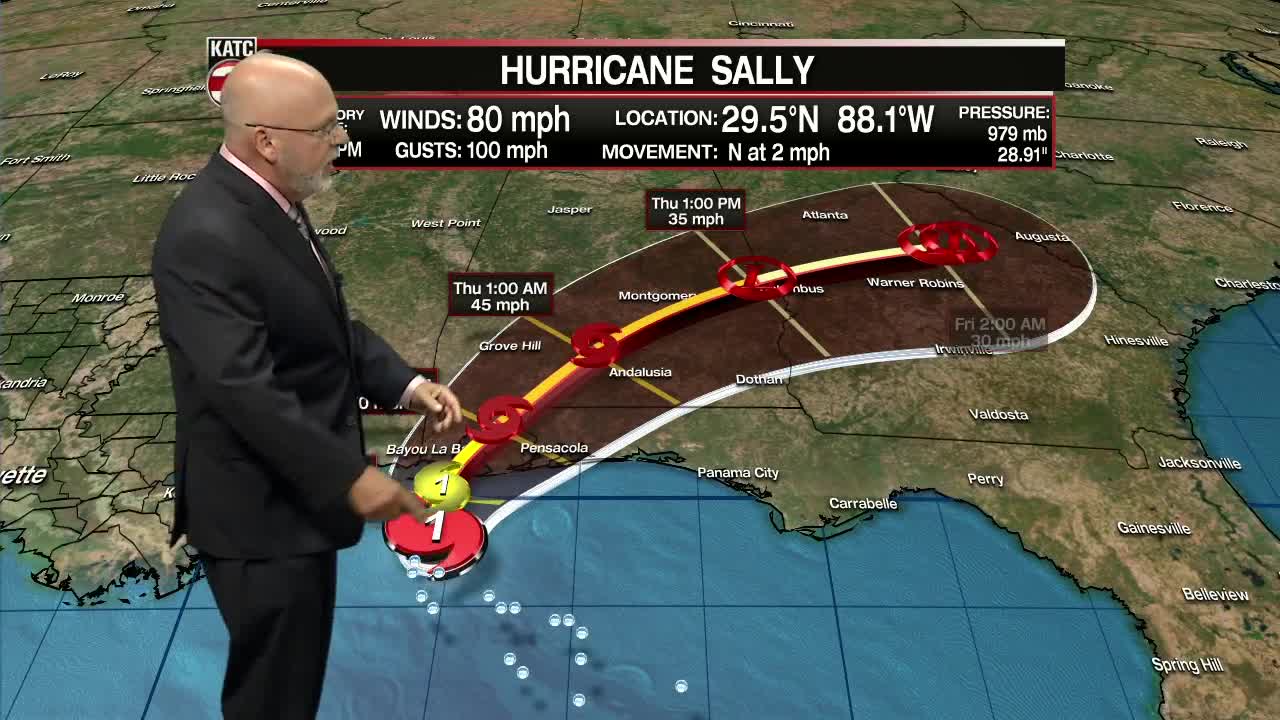 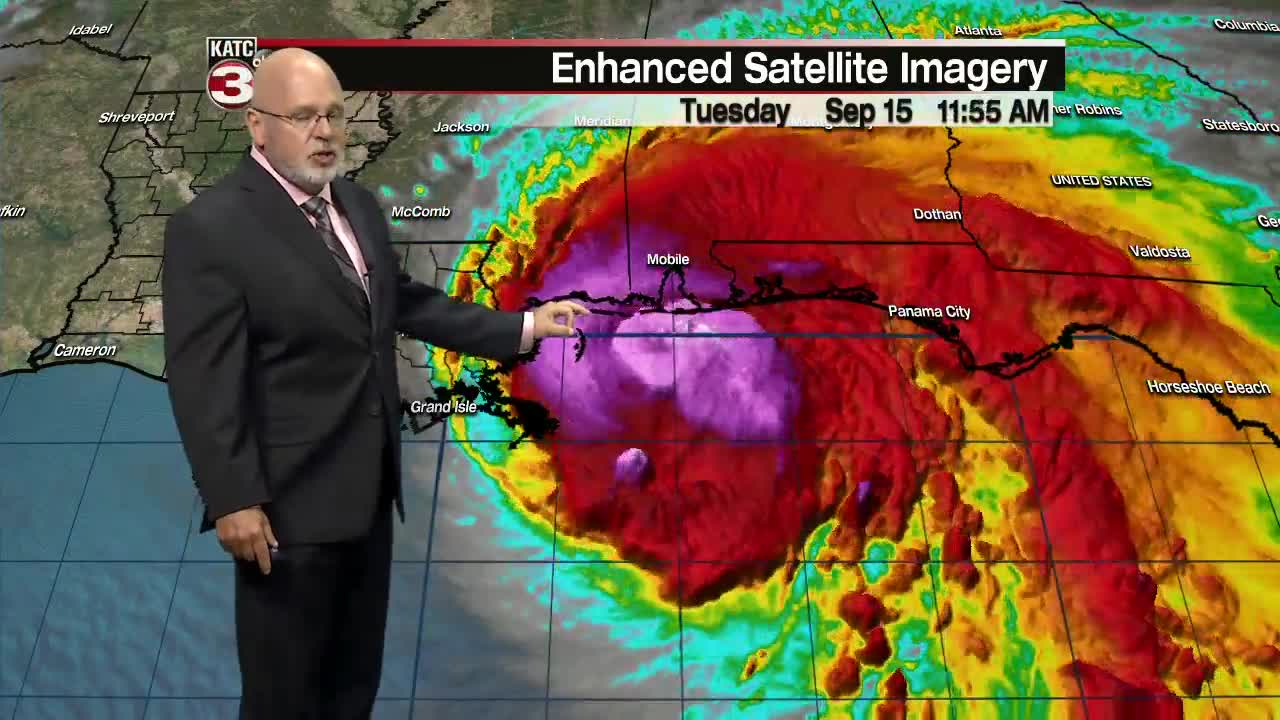 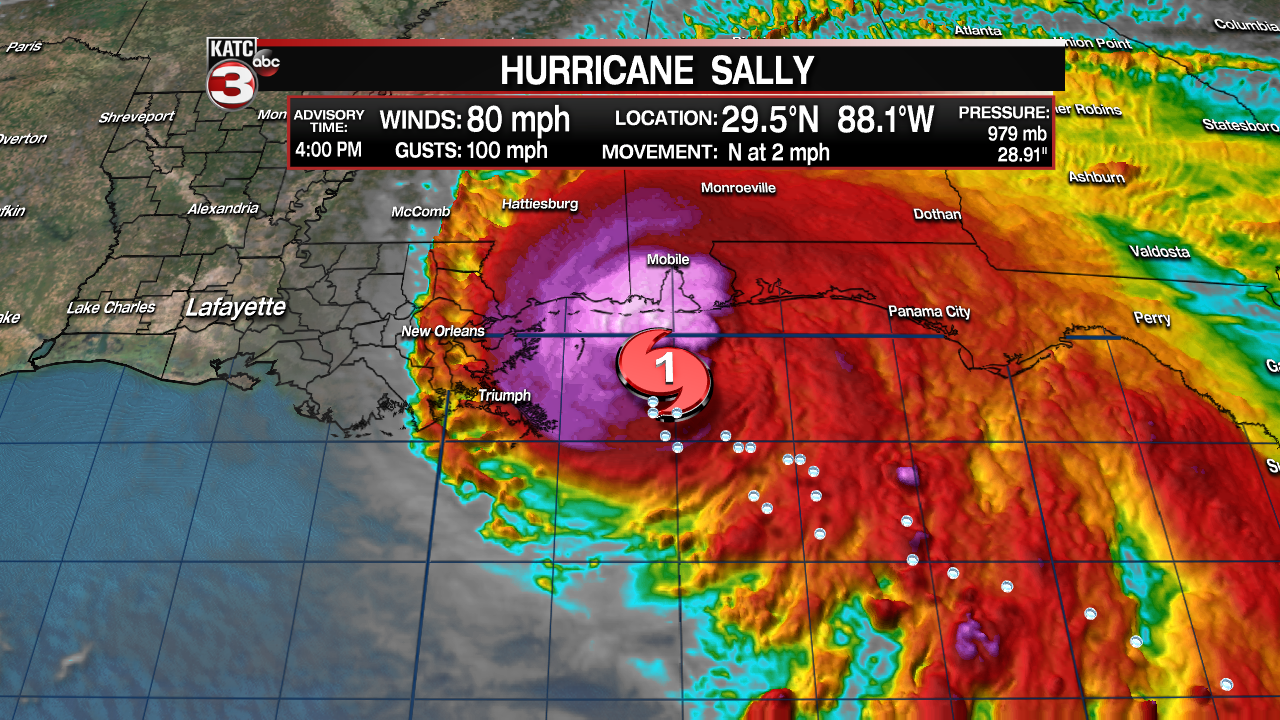 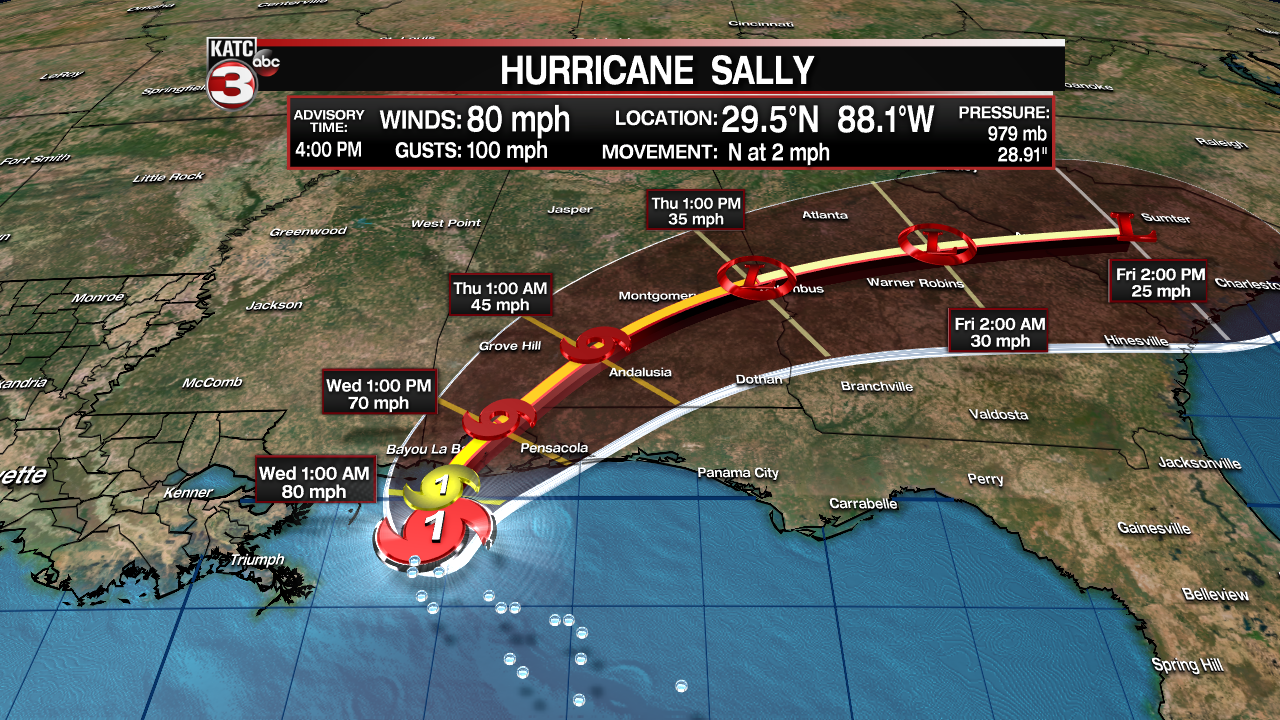 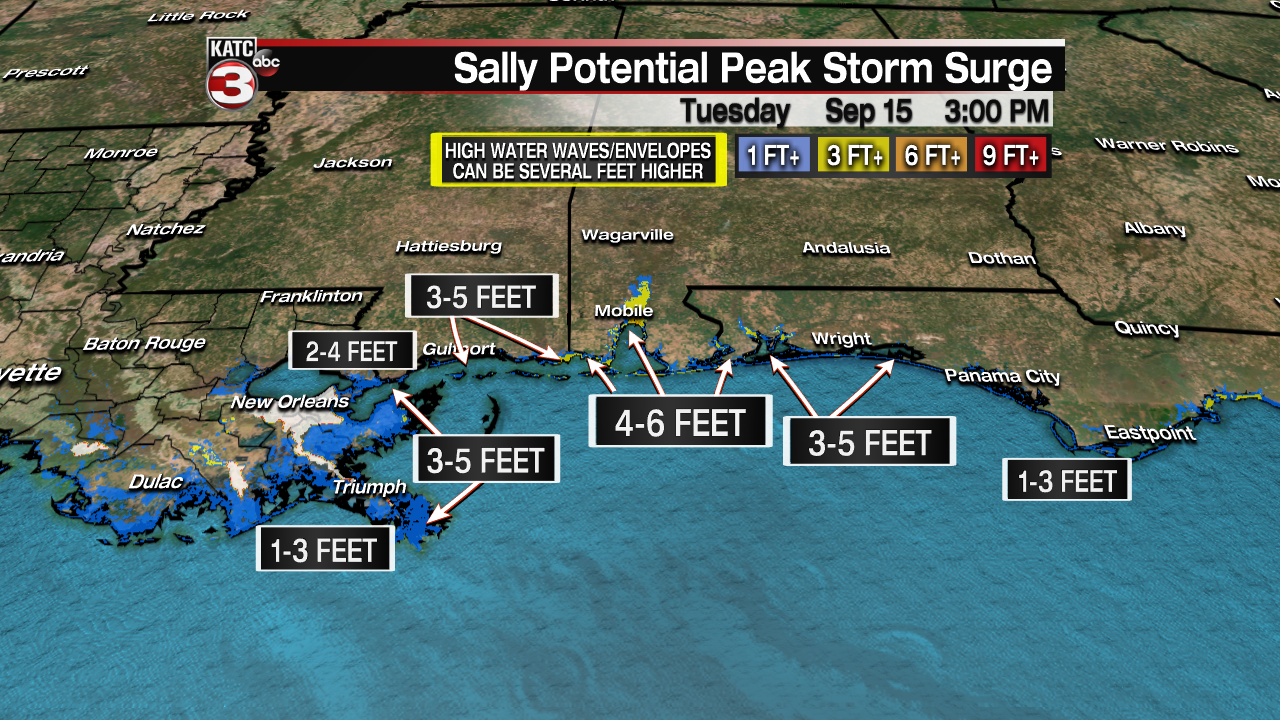 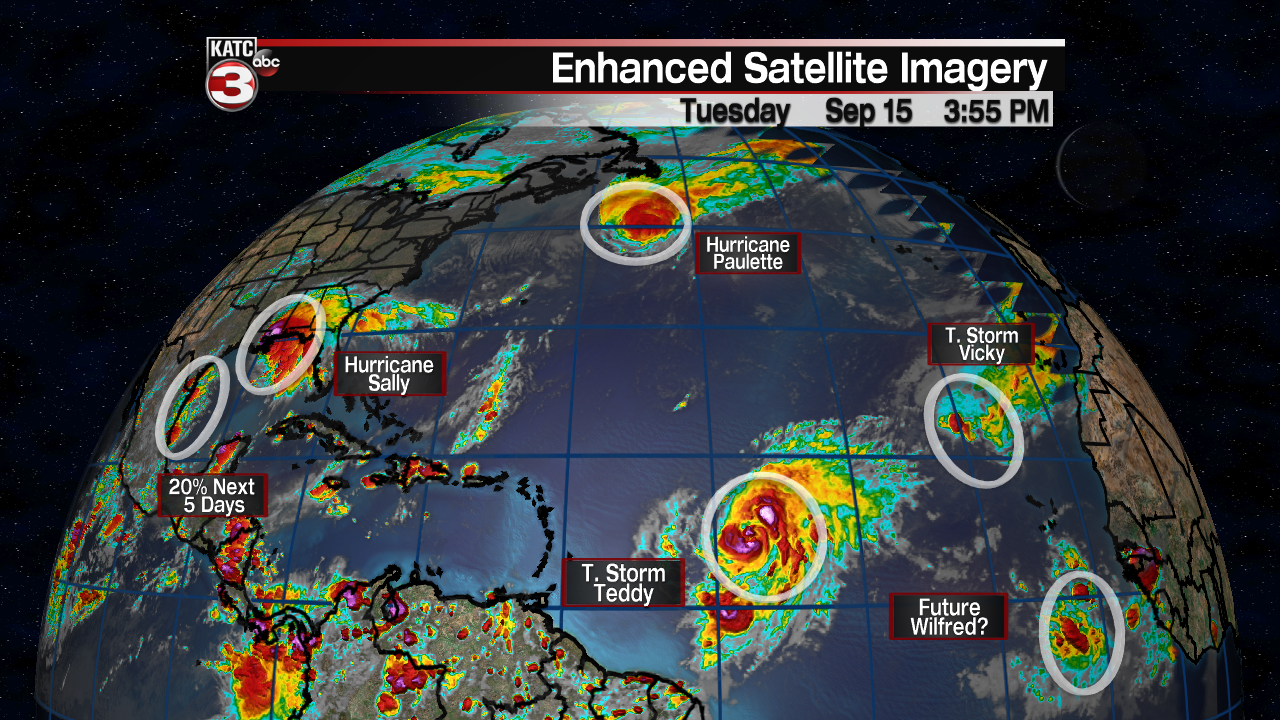 While Hurricane Sally slowly inches toward coastal Mississippi, Alabama and Florida Panhandle through Wednesday, Acadiana's weather pattern will stay on cruise control...in fact it should feel even better into the weekend.

Sally however will continue to be a major headaches for our neighbors to the east with a battering storm surge, strong winds and the threat of 10-20 inches or more of rain in spots near and east of where the center makes landfall.

No further significant strengthening is expected with Sally due to upper level westerly shear and the fact that the storm is moving so slowly it will begin to churn up somewhat cooler and more turbid water which should mitigate intensification.

The storm is drifting ever so slowly northward near 2 mph.

The storm's slow motion will exacerbate the rain an damage potential through Wednesday.

At this time, other than coastal tidal flooding across extreme Eastern Louisiana, that much of the Bayou State, including New Orleans will be spared the brunt of Sally.

Fortunately for Acadiana, our weather pattern essentially will stay on cruise control into the weekend with a sun and cloud mix accompanied by breezy northerly winds again Wednesday.

Highs will still manage to reach 90° Wednesday and Thursday, but in the wake of Sally, high pressure from the north will build southward into Friday helping to reduce our local highs and lows by a few degrees into this weekend.

Rain chances will generally stay in the 10% or less range through the weekend, although in the near term for Wednesday and Thursday, we could see a renegade tropical shower break off from Sally and push westward through the area...but no severe weather is expected.

Meanwhile, the rest of the tropics remains quite active in concert with the peak of hurricane season...but no areas in the Atlantic appear to be a Gulf threat at this time.

However, if it persists, a thunderstorm cluster that is sliding southward in the Western Gulf of Mexico may need to be watched starting this weekend...the Euro Model today is picking up on this feature and shows modest development and perhaps a northward drift of the disturbance into early next week.

There's still a solid 5-6 weeks left in the "Louisiana Prime-Time" portion of the Atlantic Hurricane Season.