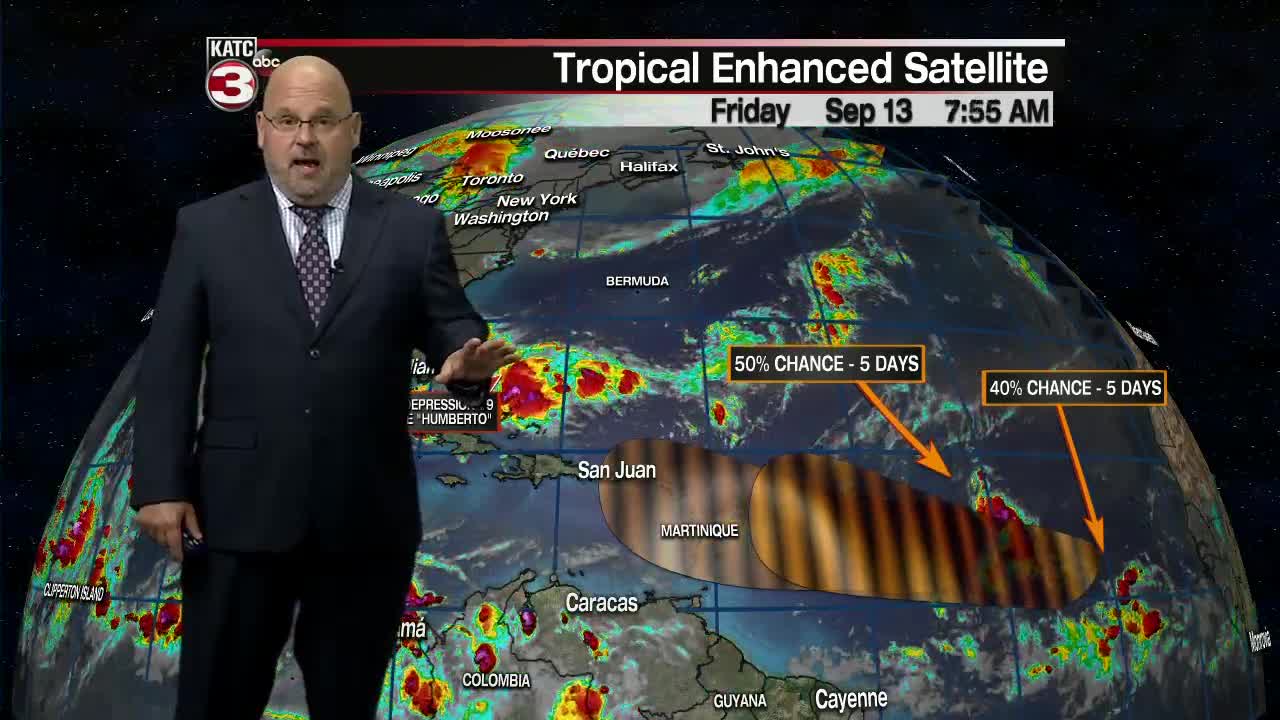 Mostly sunny and hot weather is expected for Acadiana this weekend with minimal rain chances while the tropics continue to get more active.

In the near term locally, expect mostly sunny skies this weekend along with a sun and cloud mix during the afternoons.

Temperatures will top out in the mid-90s Saturday and low-mid 90s Sunday as there should be a few more clouds in the area by the latter part of the weekend.

An upper level low traversing westward in the Central Gulf of Mexico will head for Texas by Sunday/Monday and is expected to begin to shuttle a little moisture to the coastal parishes of the area Sunday, with better rain chances for the rest of the area developing for the Monday through Wednesday time frame.

Rain chances will be near 10% Saturday, 20% Sunday, mainly along and south of the I-10 corridor, with chances improving to 30-40% for most of us into early next week.

While not unheard of, the upper low could spawn a weak area of surface low pressure as the system approaches the Texas Coast but this shouldn't have any additional impacts upon our weather.

Winds and seas however, will be picking up offshore this weekend in response to this system with a fairly decent chance of tropical showers and a few "squally" thunderstorms in deep water areas.

With slightly better rain chances into next week, daytime highs will be closer to the lower 90s...but unfortunately, any promise of a cool front in the 10 Day Forecast has been pushed back at least several more days, so it looks like the beginning of fall on the calendar, will feel quite summer-like.

Meanwhile, Potential Tropical Cyclone #9 was upgraded officially to Tropical Depression 9 Friday afternoon, and is expected to become Tropical Storm Humberto Saturday, and a hurricane by early next week.

The track over the last several National Hurricane Center advisories has shifted east as center had formed farther to the east than earlier estimates.

The worst winds and weather this system should stay offshore the U.S. Coast...but portions of the Bahamas, and yes the same areas impacted by Dorian, may experience tropical storm force winds and locally heavy rainfall of 2-6" into this weekend.

Elsewhere, in the mid-tropical Atlantic there are two disturbances that show fairly good promise for developing as they near the Eastern Caribbean in the 4-6 day period.

The longer range projections keep the Atlantic tropics busy into at least early October, but there is no way of telling whether there will be any significant Gulf of Mexico threats at this time.

The peak of hurricane season for Louisiana generally can last into the first couple of weeks into October.