Hot start to October but relief on the way 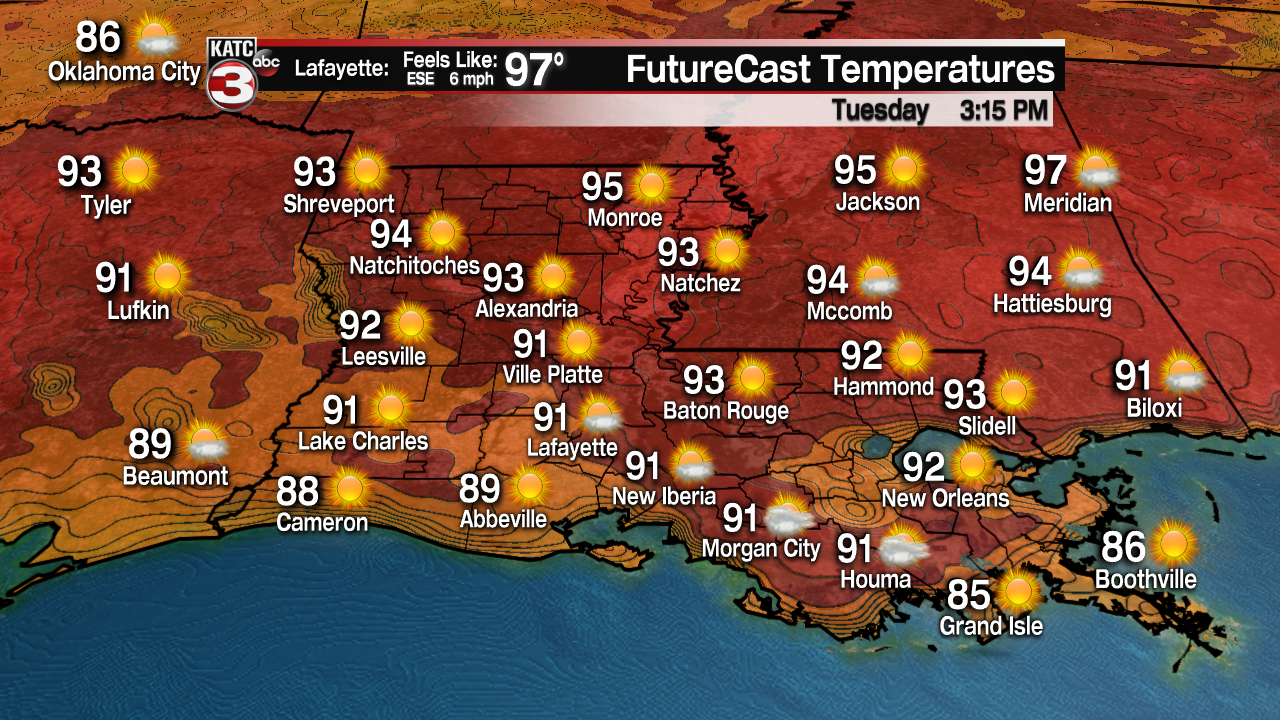 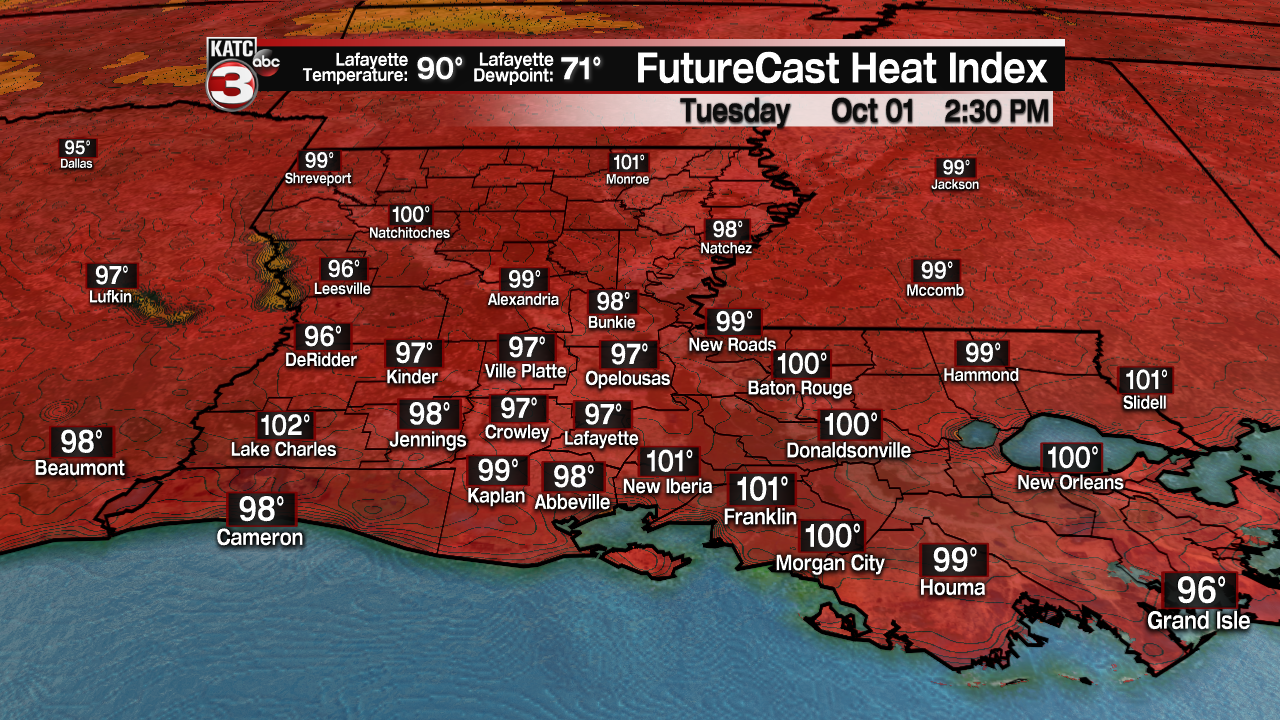 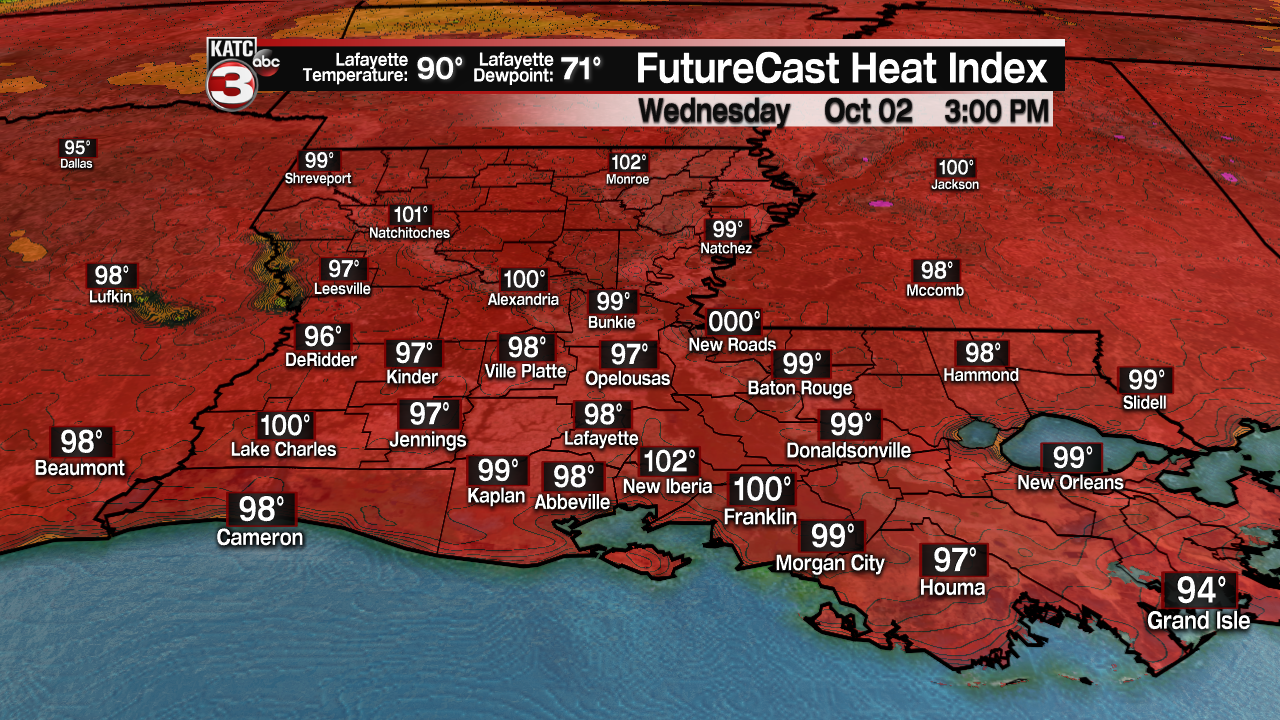 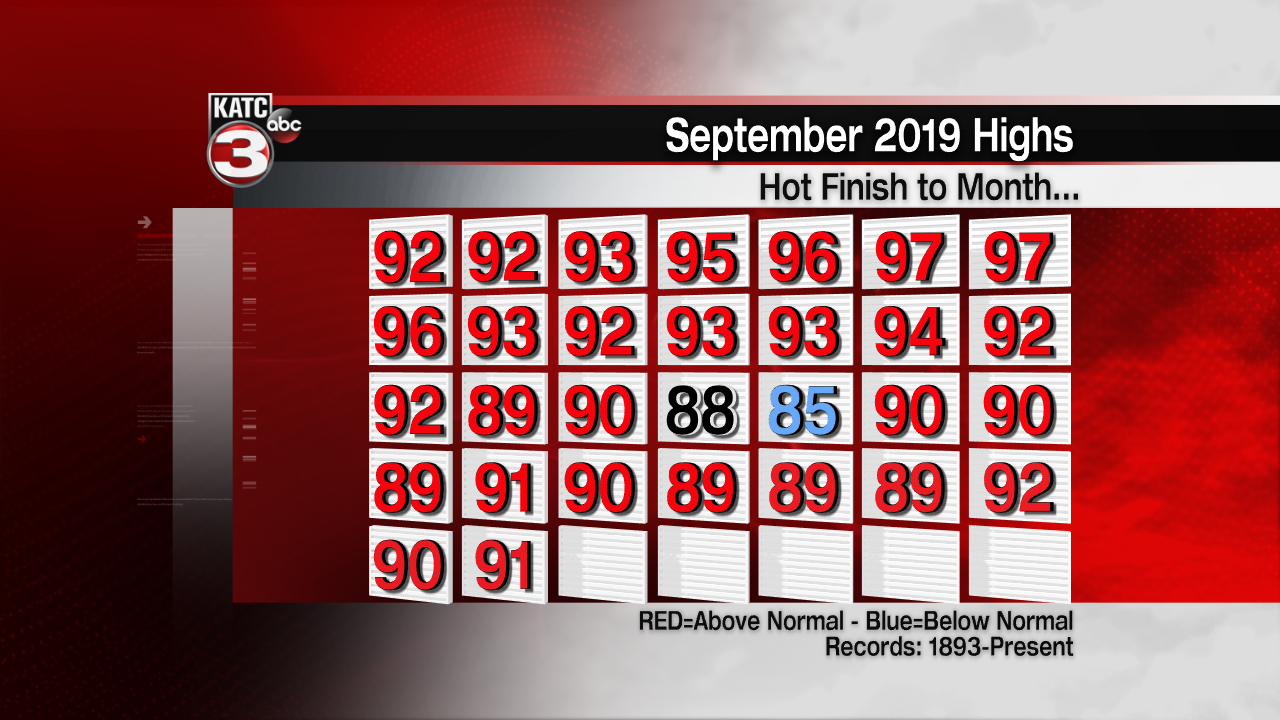 Acadiana will be starting October with more summer-like temperatures after ending up with the third hottest September on record.

Except for two days in Lafayette, every afternoon high was above normal this September and the first week of October doesn't look much different until a much awaited cool front arrives in about a week's time.

2019 goes into the record books as the third warmest on record when averaging the lows and highs for the month, 2nd only to the dust bowl year 0f 1933 and the record year of 2005...the hot year which was also responsible for the Gulf tropical monsters of Katrina, Rita and and late in the year storm, Wilma.

Forecast-wise, look for some late night clouds and patchy fog to give way to mostly sunny skies Tuesday with highs reaching the lower 90s.

Heat indices will again climb into the upper 90s and may approach 100 degrees in a few spots during the mid-afternoon hours.

Rain chances Tuesday will likely stay near 10% or less.

Little change is anticipated Wednesday with perhaps a slightly better chance of an isolated afternoon shower, but rain chances will likely be 20% or less.

The sub-tropical ridge of high pressure anchored over Arkansas Tuesday afternoon will be slow to budge for the rest of the week into the first part of the weekend, so temperatures will continue to stay 5-8 degrees or more above normal through then.

The Euro Model does suggest a fizzling front arriving near the Gulf States later this week, but it's a stronger frontal system that should bring some rain chances to the area next Monday with sharply cooler temperatures hopefully to follow.

Temperatures behind the front will be subject to change, but we are looking for overnight/early morning lows to drop into the upper 50s to lower 60s while daytime highs stay mostly in the upper 70s for a couple of days mid-next week.

Monday the operational Euro model was forecasting cooler than the above estimates, while the GFS is much less excited about a significant cool down.

Per usual, the cool air may not last long, and we'll still be keeping an eye toward the tropics...

A mainly upper level disturbance spanning from Jamaica, through Cuba northward to the Bahamas Monday is expected to drift westward over the next few days with the possibility of some tropical/low pressure development in the Southern Gulf later this week and/or into the weekend.

If something ever to get going in the Gulf, should be swept up by the approaching cool front, but we will maintain an eye on this feature, and expected the National Hurricane Center to begin talking about this feature by mid-week.

And well after the front passes next week, it still appears the portions of the Western Caribbean and perhaps the Southern and Eastern Gulf of Mexico could be tropical hot-spots into mid-October.

The Gulf of Mexico tropical season doesn't really shut down (mainly thanks to the Bay of Campeche in the latter part of the month) until early November.

Meanwhile the record smashing Hurricane Lorenzo with 105 mph winds Northeast Atlantic Monday is expected to have impacts on the western-most Azores with tropical storm force winds and huge swells and waves Tuesday night through Wednesday before departing and eventually weakening as the system approaches the Northern U.K. later this week.

Hurricane warnings were posted for the western Portuguese Islands while tropical storm warnings covered the rest.