Hot and dry to end the week/Watching the tropics 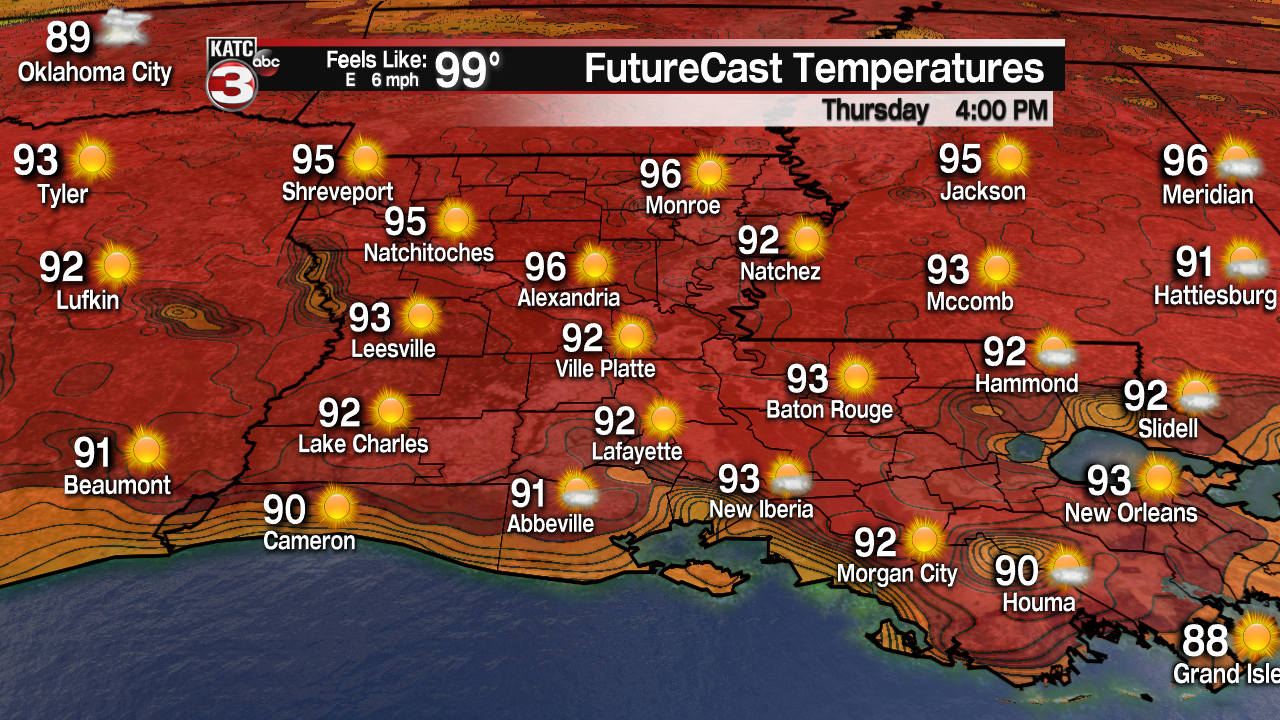 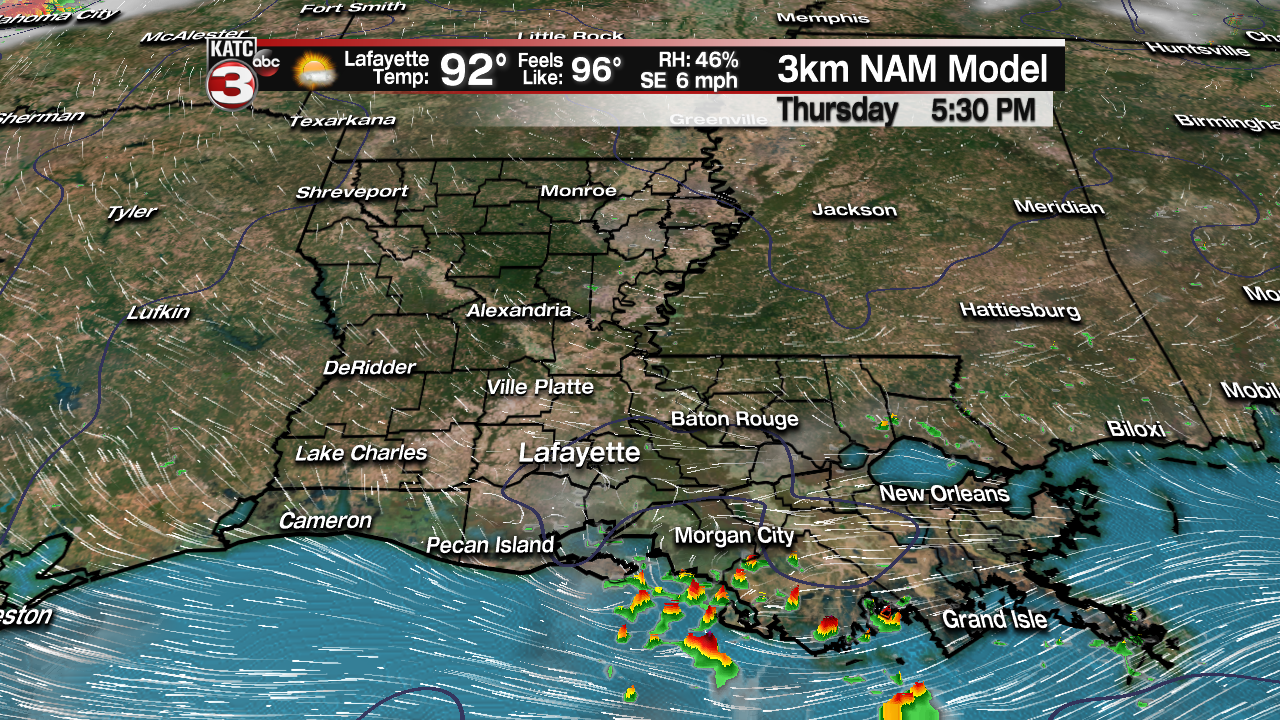 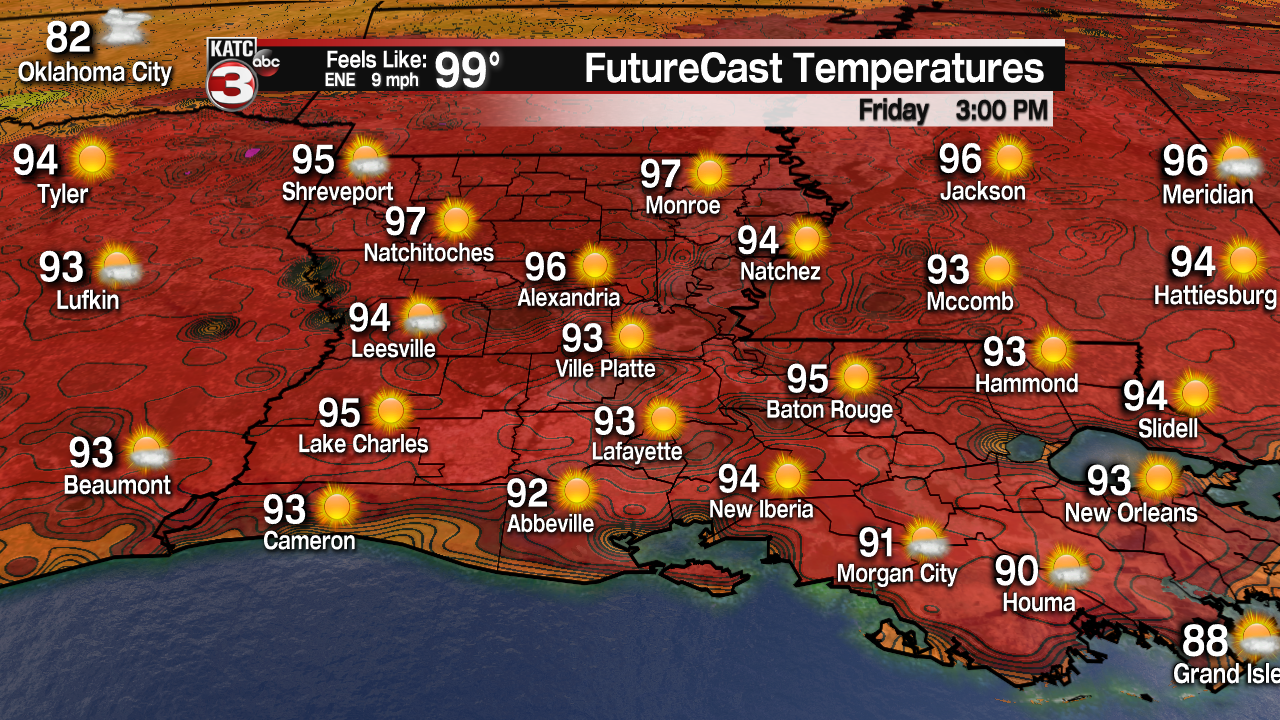 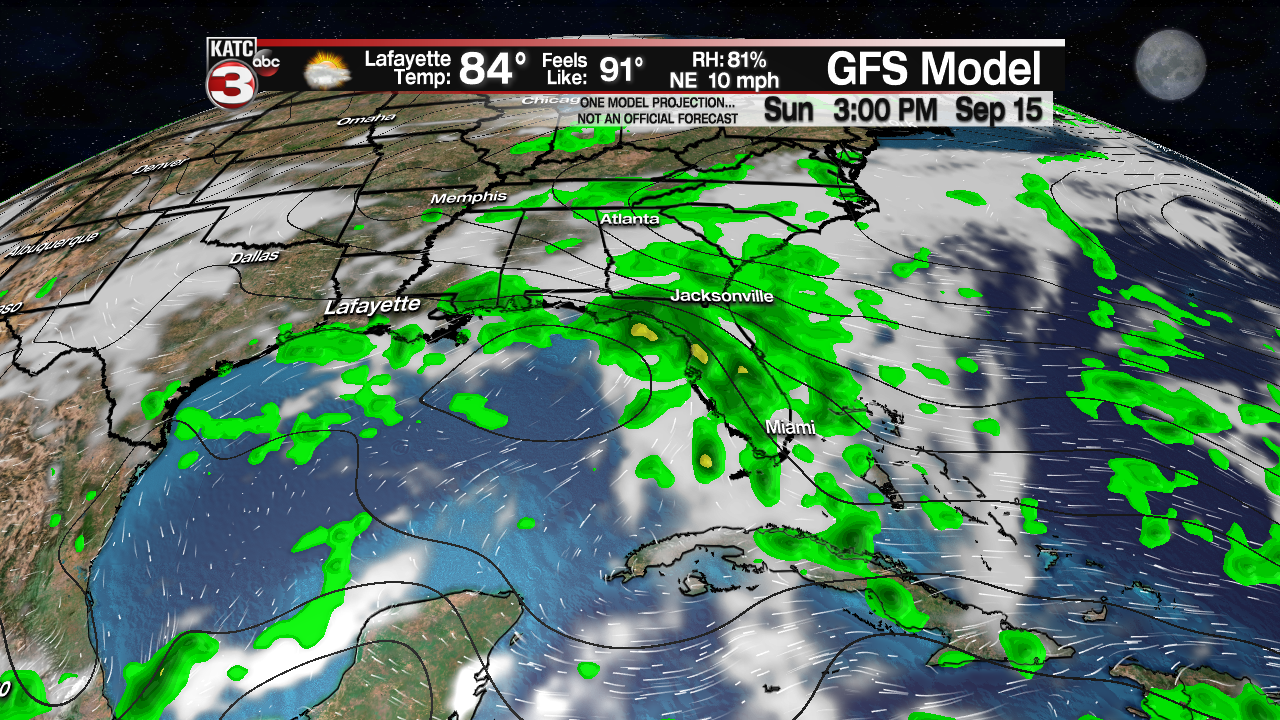 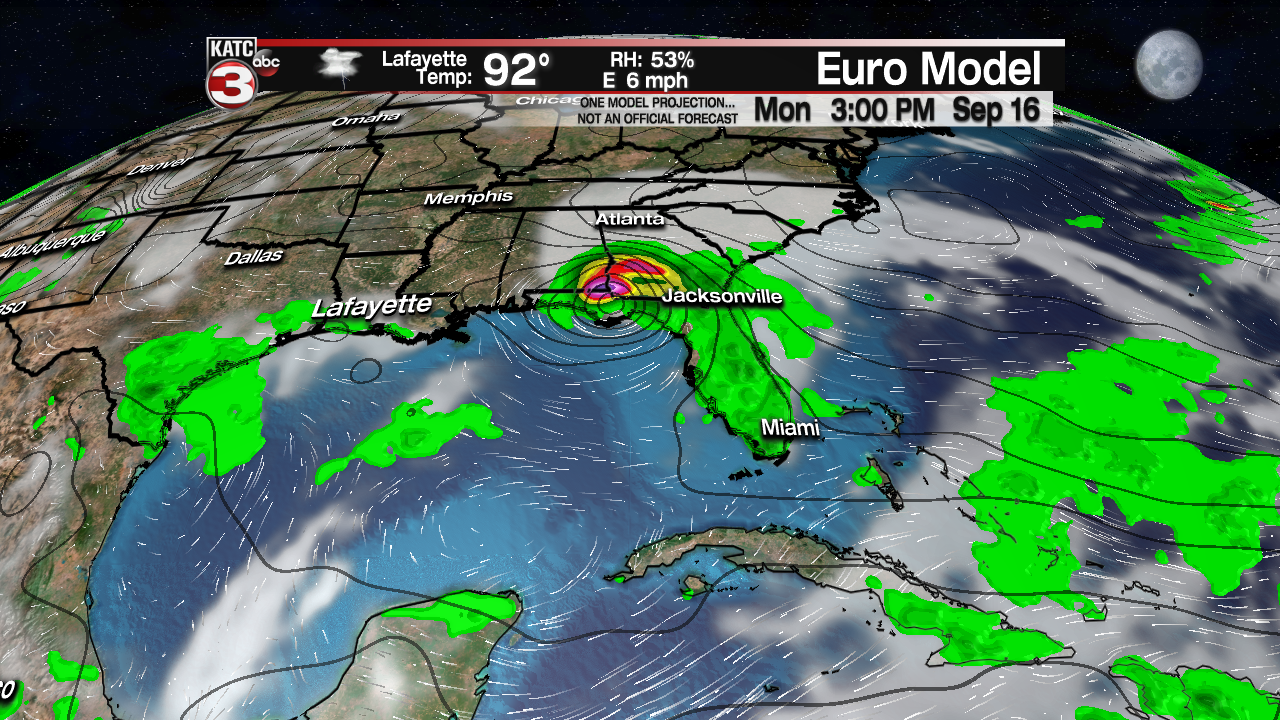 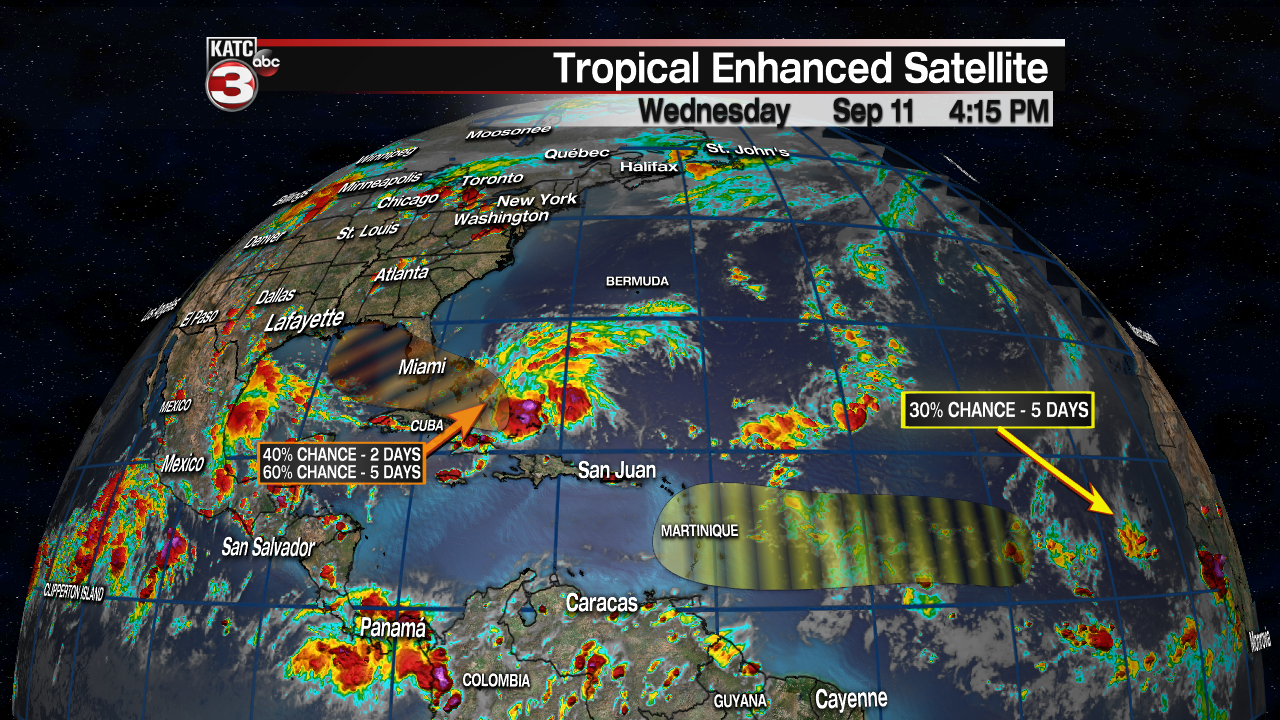 To end out the work week high pressure will build across the eastern part of the country keeping us on the hot and dry side.

Highs Thursday through Saturday will be in the low to mid 90s with heat indices topping out near 100 with mostly sunny skies.

And thanks to drier air moving into the region in the upper levels that should limit any rain activity but I won't rule out a 10% chance for maybe a stray coastal shower.

Beyond Saturday there is still some questions in the forecast for Sunday into early next week as our weather will be influenced by what ends up happening with the potential tropical wave/system moving into the Gulf.

Right now most of the models keep the center of the tropical system to our east towards Alabama and Mississippi but it might still be close enough to us to increase our chance for scattered showers and storms in the afternoon.

That said the latest Euro model has the system farther to the east closer to Georgia and Alabama which could wrap around more dry air over Louisiana and keep us on the hot and dry side.

Right now we are going with a blend of the models and keeping a 30-40% chance for some afternoon showers or storms Sunday through Tuesday.

For the middle of next week we go back to a typical summer pattern with hot and humid conditions as highs hold in the low to mid 90s with a slight chance(20-30) for a few pop-up showers and storms with the heating of the day.

Then, just maybe, we might finally get our first fall cold front to swing into Acadiana late Friday into Saturday.

As the front moves through we will have a chance for a line of showers and storms followed by nice fall-like temperatures.

Highs the weekend of September 21-22 could be in the low to mid 80s with overnight lows in the upper 50s to lower 60s!

In the tropics the wave by the lower Bahamas is beginning to get a little better organized with a larger cluster of showers and storms.

This tropical wave is not expected to move much the next couple days as it slowly drifts towards Florida.

Both models have it moving over the Florida peninsula on Saturday as an open wave.

Once it crosses into the eastern Gulf there is the possibility for some development, maybe becoming a tropical depression or weak tropical storm.

But as I mentioned earlier this system should stay to our east and eventually move up ashore to our east near Alabama with very minimal impacts for Acadiana.

Also in the far Atlantic by the Cabo Verde Islands there is another tropical wave that we are watching.

Right now the National Hurricane Center is giving this wave a 30% chance of development as it travels due west across the Atlantic over the next 5 days.

Most long range models keep this an open tropical wave during that time frame but once it gets closer to the Lesser Antilles and moves into the Caribbean by Tuesday that is when this system could encounter favorable conditions and strengthen.

If you follow the models they have it heading for the Bahamas and then stay offshore as it gets pushed out to sea by the strong cold front that I mentioned that could bring us the fall-like weather by next weekend.

However, that is still a long ways out and nothing is a guarantee so we will need to monitor this system closely as it impossible to know for sure exactly what it will end up doing.