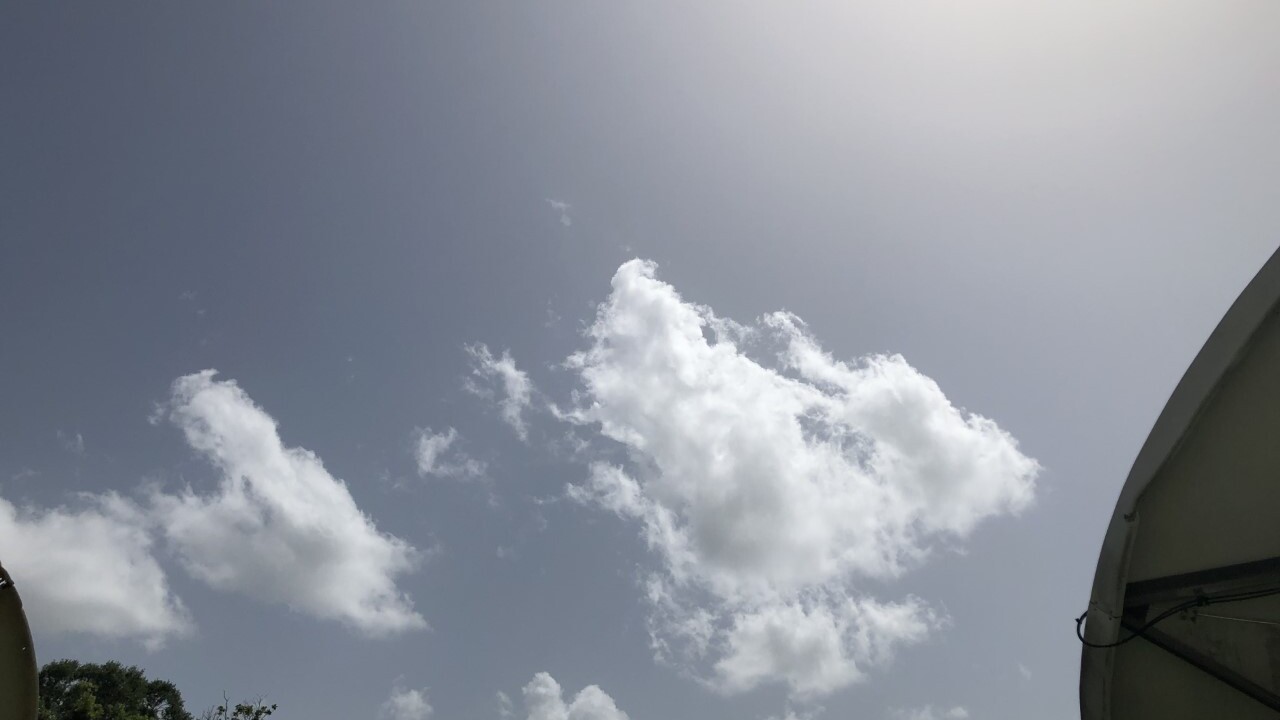 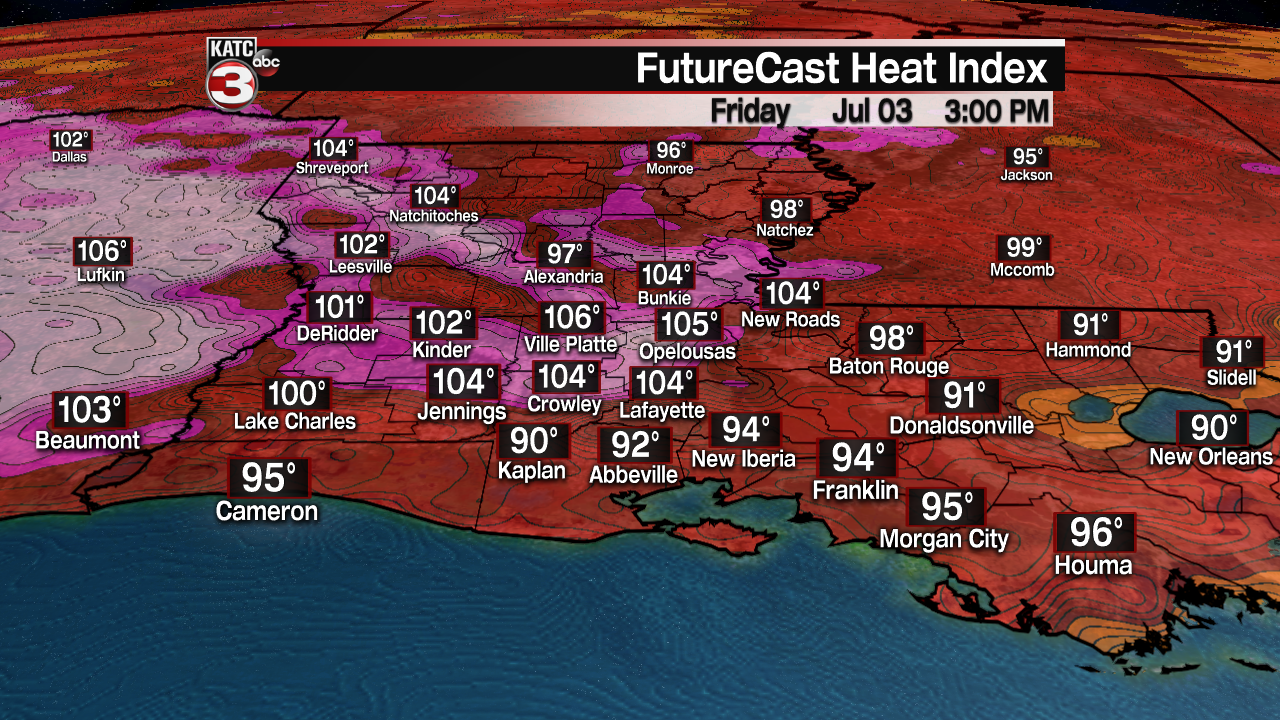 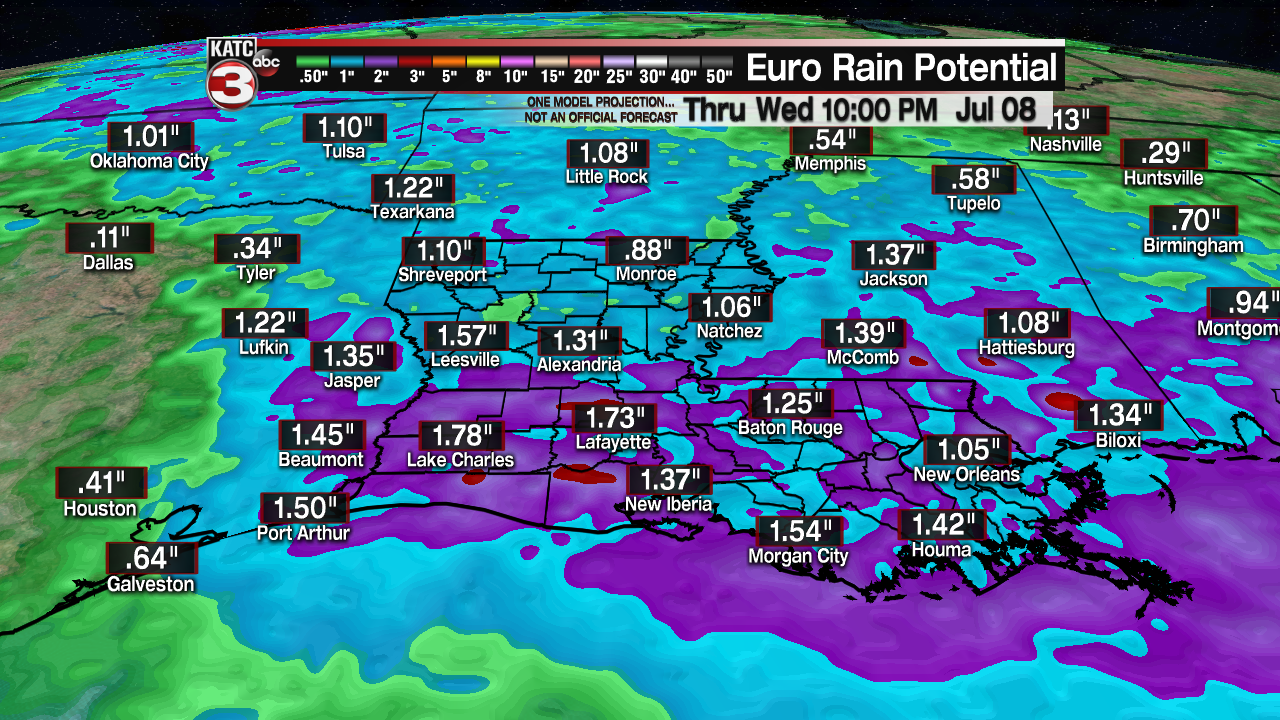 Acadiana will continue to see hazy, hot and humid conditions through midday Friday, but a change is on the way in the form of much better chances of scattered, mainly daytime showers and thunderstorms this holiday weekend.

In the near term, expect another steamy night with lows barely dropping into the upper 70s through Thursday morning.

And after some morning clouds, look for mostly sunny conditions tempered by more atmospheric haze thanks to some lingering Saharan dust.

Temperatures Thursday will push into the lower 90s with heat indices likely between 100-104° during the afternoon.

Rain chances will remain slight, at 10% or less, but at least there may be a storm or two on locally radar, unlike what we have seen Tuesday and Wednesday of this week.

Friday will bring more of the same, but scattered afternoon showers and storms should roll in from the northeast during the afternoon/early evening.

Before the storms Friday, with temperatures in the lower 90s and dew points in the mid-70s or higher, heat indices will probably push up to near 105°.

Any storms we do see Friday could be capable of strong and gusty winds thanks to the dust in the area providing drier air at mid-levels that aids in stronger downdrafts in storms.

The dust/haze will get washed out of the area this weekend with a good chance of scattered, mainly daytime showers and thunderstorms.

An upper level disturbance rolling southward through the Mid-Mississippi River Valley Wednesday is expected to drop to the Gulf States into the weekend and will likely be nearly stationary for several days into early next week.

The result for Acadiana will be a good chance of mostly daytime showers and storms with rain chances near 60% (give or take 10%) on any given day Saturday through Tuesday.

While no day looks like a true washout, the timing of storms will vary from day to day, with some days seeing a morning round of storms followed by another round in the afternoon/early evening, or just one round of storms at any time with some atmospheric stabilization keeping activity at bay for the rest of the day.

While rain chances will be high, at this time models are not indicated a whole lot of rain (generally 1-2" or a little more cumulatively through mid-next week)...

But as we all know, days that we have slow-moving storms, isolated rain totals can exceed that in less than an hour, so we suspect localized much higher amounts will be possible as compared with our computer model guidance.

While most of the activity will likely be during the day Saturday through Tuesday, there will be the risk of a few nighttime storms during this period as well.

Temperatures will hold closer to the mid-upper 80s during the times of our elevated rain chances...so there's that!

The mid-latter part of next week will likely see a ridge of high pressure begin to nudge back in from the Eastern Gulf of Mexico helping to reduce the prospects of storms, but allowing for hotter temperatures to return.

Meanwhile in the tropics, it remains very quiet with little prospect of any developing systems through mid-July, but at the same time, the Saharan Dust Layer is expected to lessen and become more fractured in nature across the Atlantic Basin, thereby permitting more tropical wave action for the latter part of the month...and certainly into August.

With the exception of a small portions of the Gulf of Mexico, the tropical Atlantic waters are well above normal, favoring enhanced tropical activity, especially during the prime-time months of August through October.