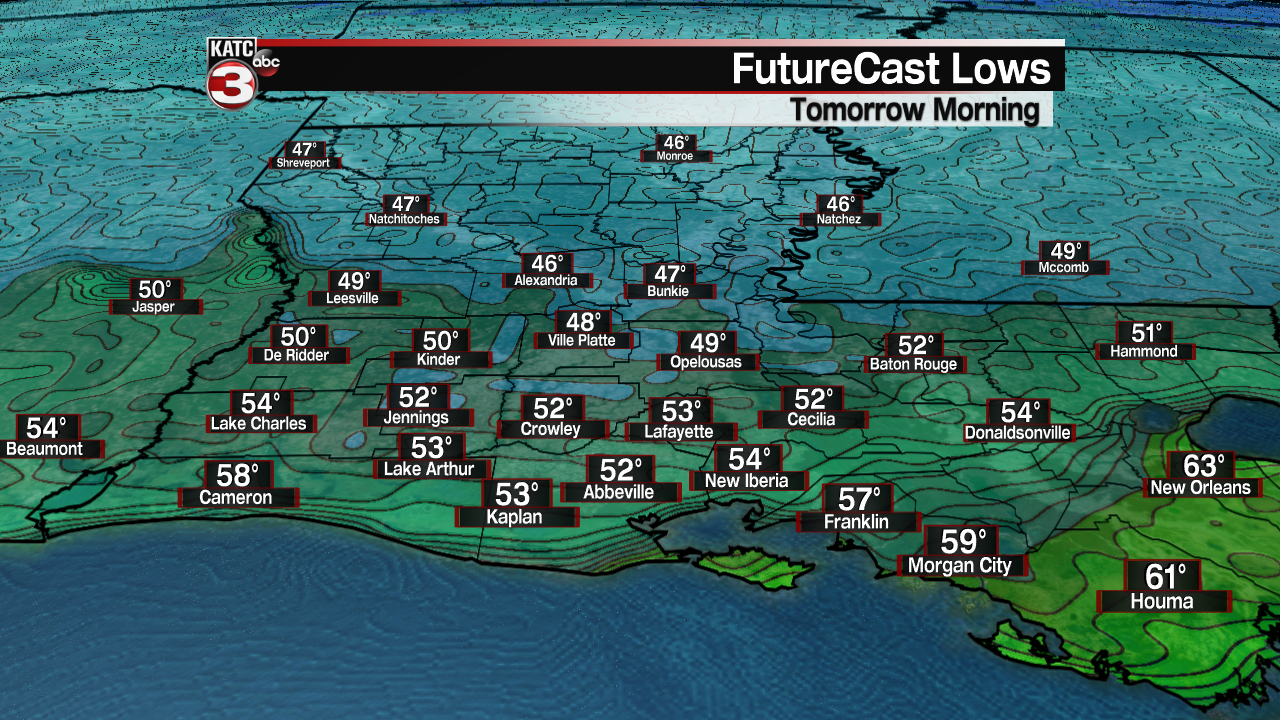 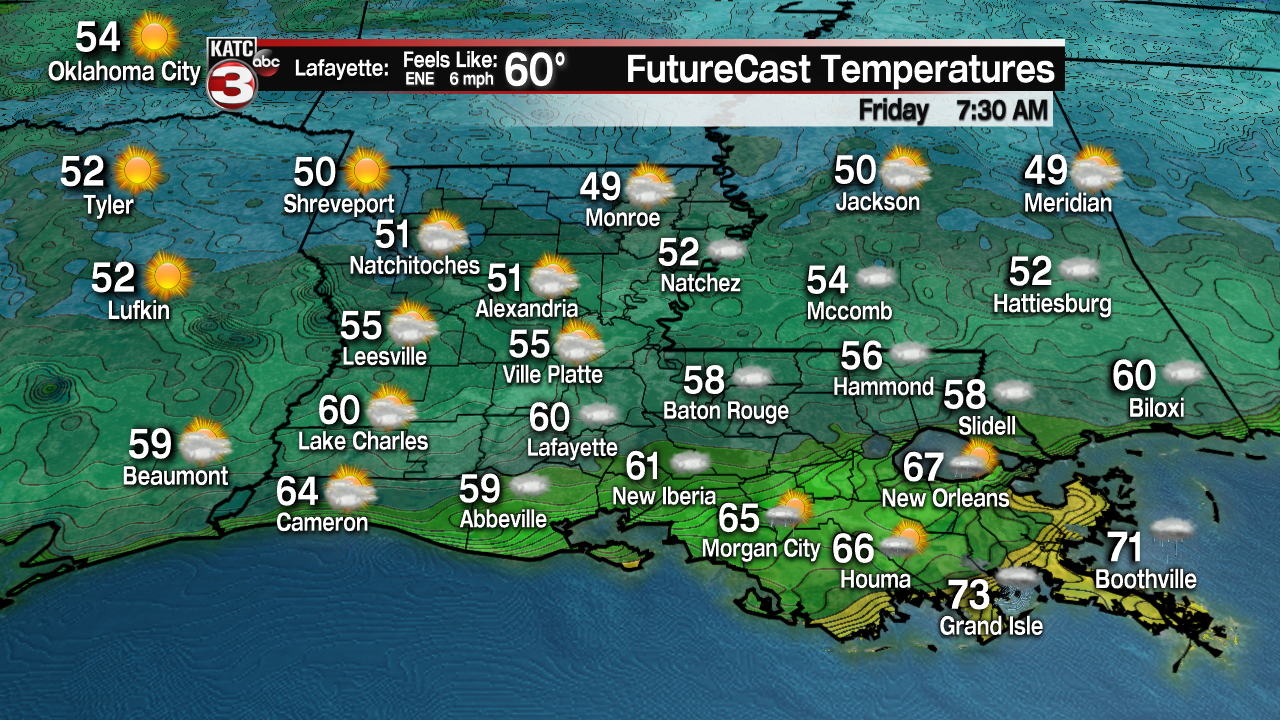 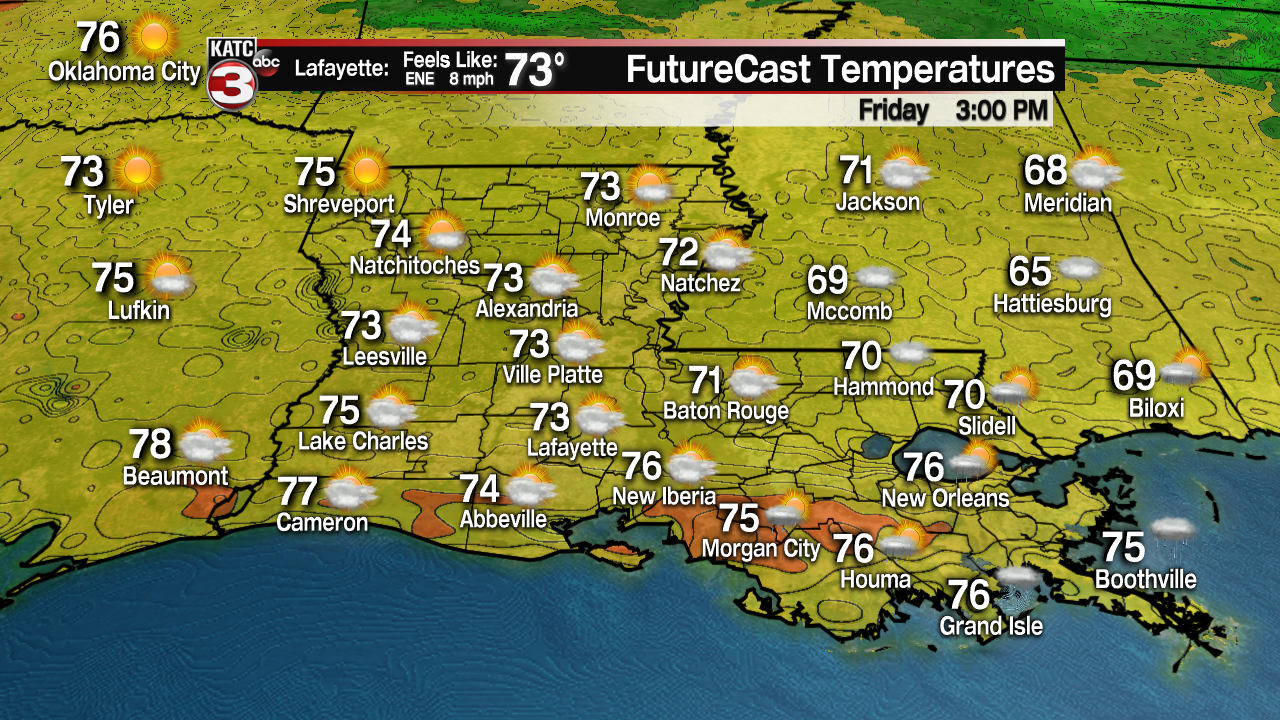 A strong cool front early Wednesday will continue to usher in breezy and cooler conditions into Acadiana through Thursday morning.

Look for temperatures by Thursday morning to drop into the low to mid 50s in most areas, with readings in the upper 40s in the northern parishes of the area.

Plenty of mid and high level clouds will persist through Thursday with a few breaks overnight and again during the day.

And although we may see a peek or two of the sun Thursday, temperatures will likely struggle to reach 70 for an afternoon high.

Look for a few more intervals of sun Friday along with the risk of a few isolated showers in advance of low pressure that is expected to develop in the Gulf of Mexico through Friday.

The National Hurricane Center (NHC) has given a weak area of low pressure in the extreme Southwestern Gulf of Mexico (in the Bay of Campeche) a 50% chance of developing into a tropical or sub-tropical cyclone...meaning a depression and perhaps, a low end named tropical storm.

The next available name on the NHC list for this year is "Nestor" (NES-tor).

But with the front north of the system and upper level westerlies in play, whatever low pressure system that would develop would probably not be solely deriving it's energy from the warm Gulf waters.

Either way, it does appear that an area of low pressure will developing in the west central Gulf by Friday raising winds offshore the Louisiana Coast and bringing main impacts east of Louisiana in the form of some locally heavy rainfall, primarily from Mississippi, Alabama eastward into the Florida Panhandle Saturday, and then inland into the parched areas of the Southeast U.S.

Rainfall totals of 3-5" of more across portions of the Northern Gulf Coast States east of Louisiana will be possible Saturday.

Other than increasing tides along the Louisiana Coast Friday, there will be no direct impacts of this system in Acadiana.

These winds will likely push tides a couple of couple feet above normal along the Acadiana Coast Friday and and perhaps up to 2-3 feet or slightly more toward Southeastern and Eastern Louisiana into Saturday.

Temperatures will be in the lower 80s Saturday and increase into the mid-80s Sunday along with increasing humidity.

A good chance of storms is expected Monday with Acadiana's next cool front, followed by nice and cool conditions with some staying power for mid-next week.

Another front may arrive next Friday insuring nice and fresh weather, and perhaps the coolest readings of the season into the last weekend of the month.