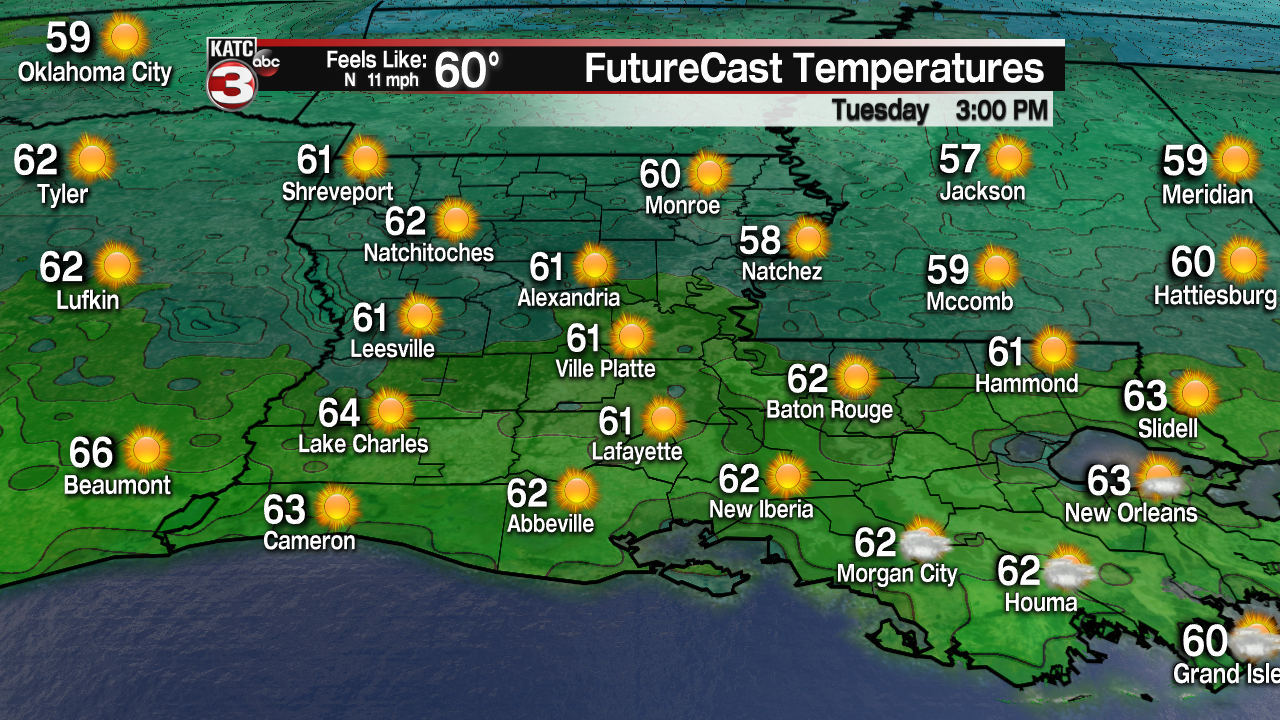 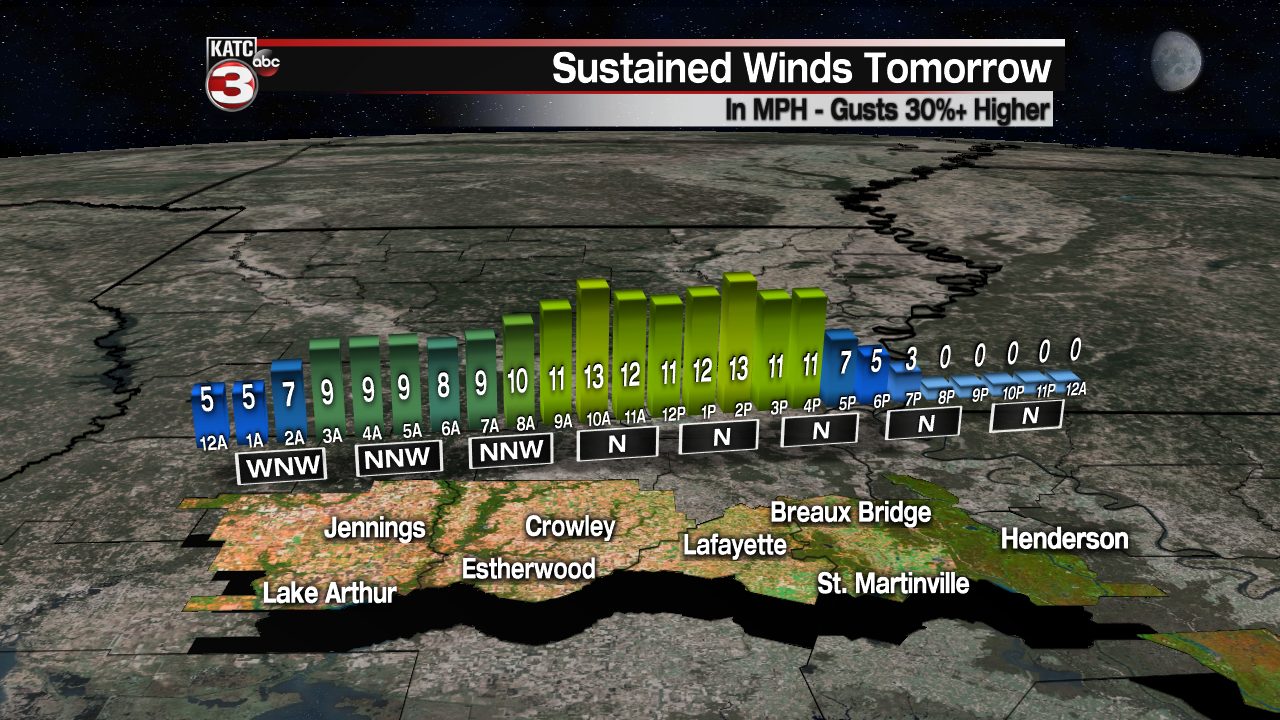 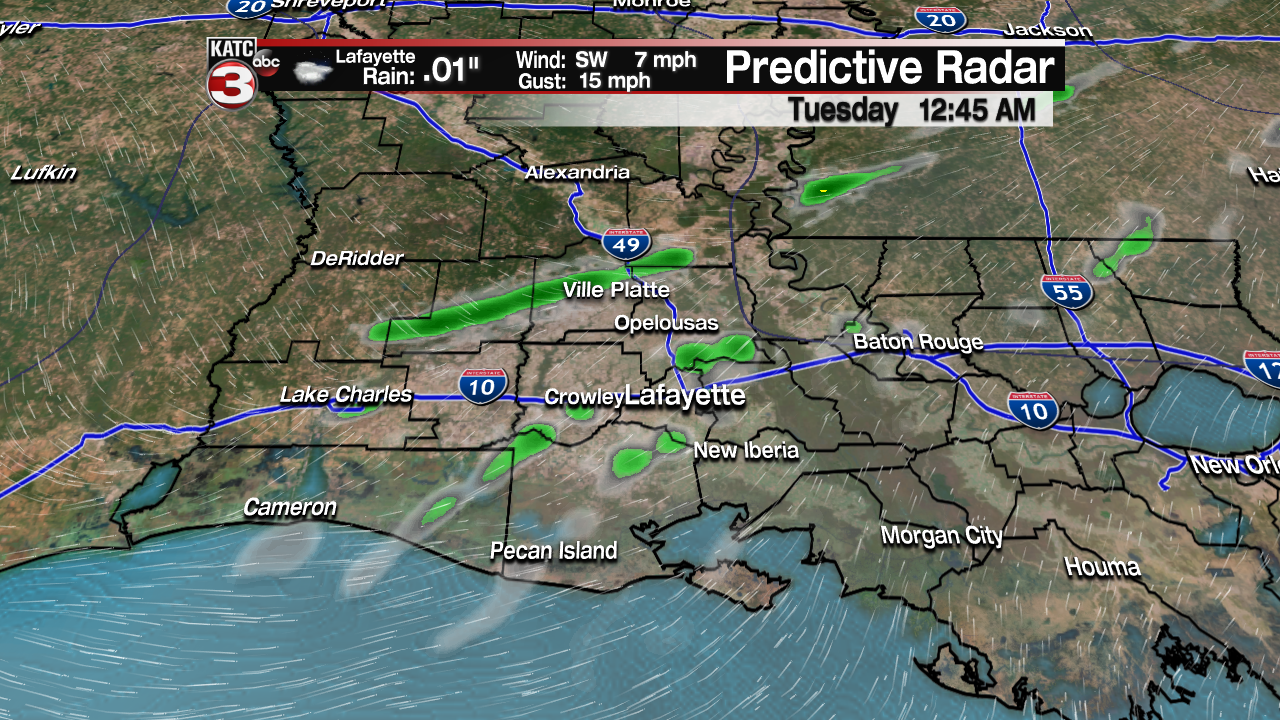 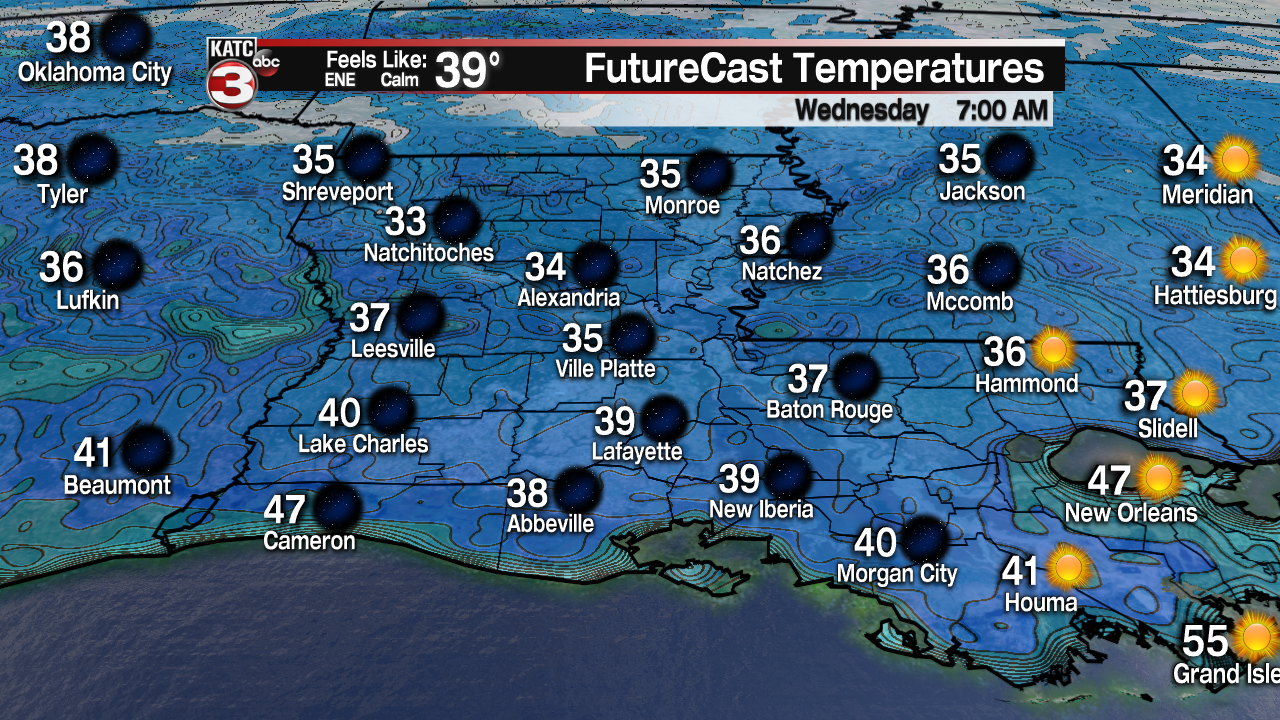 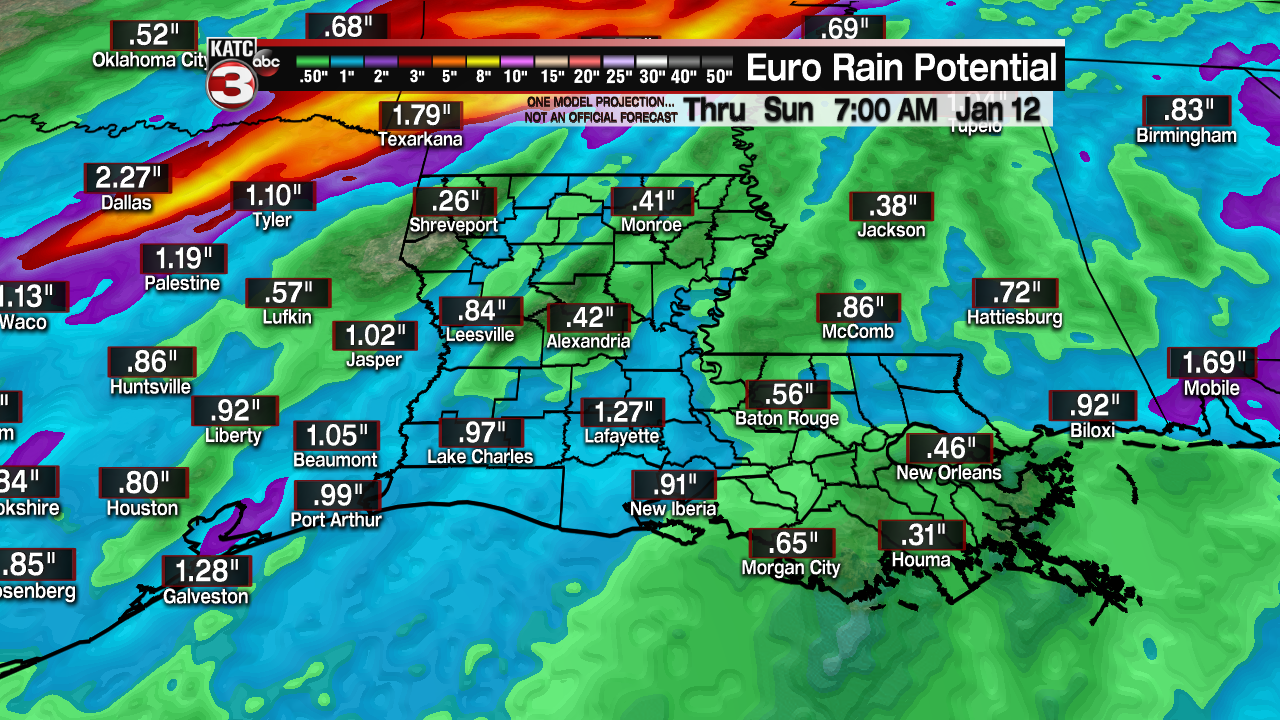 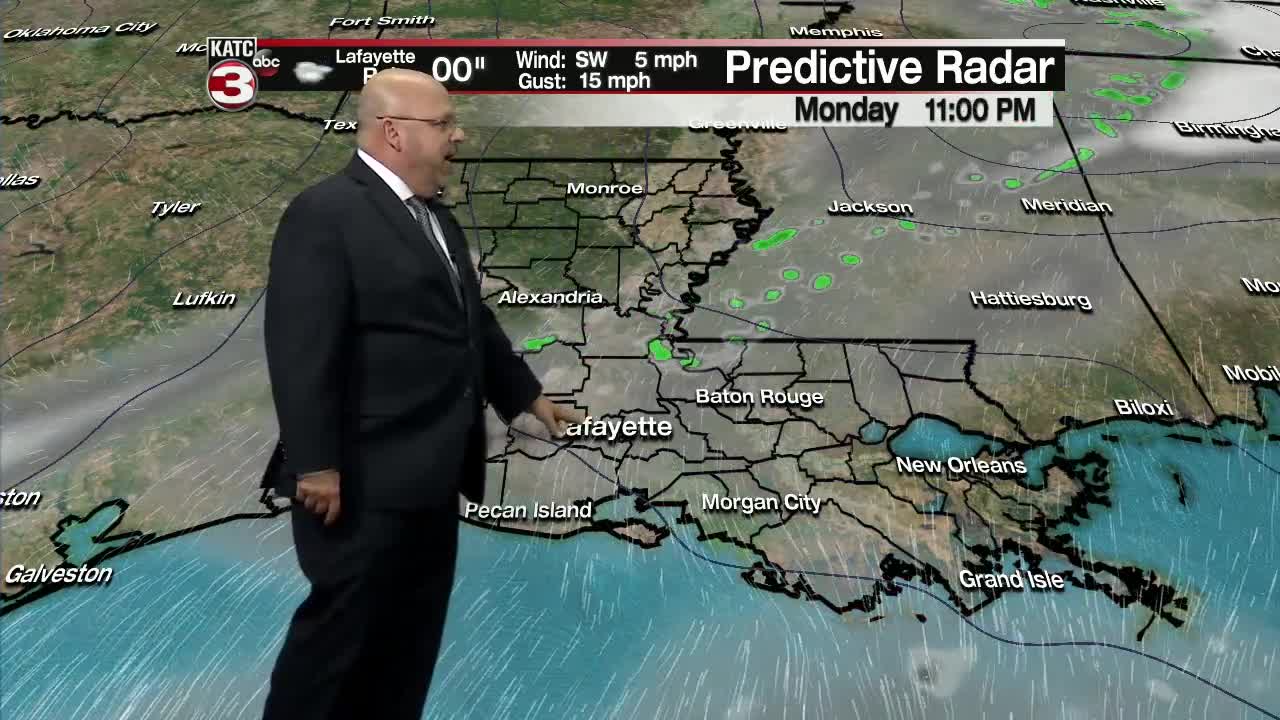 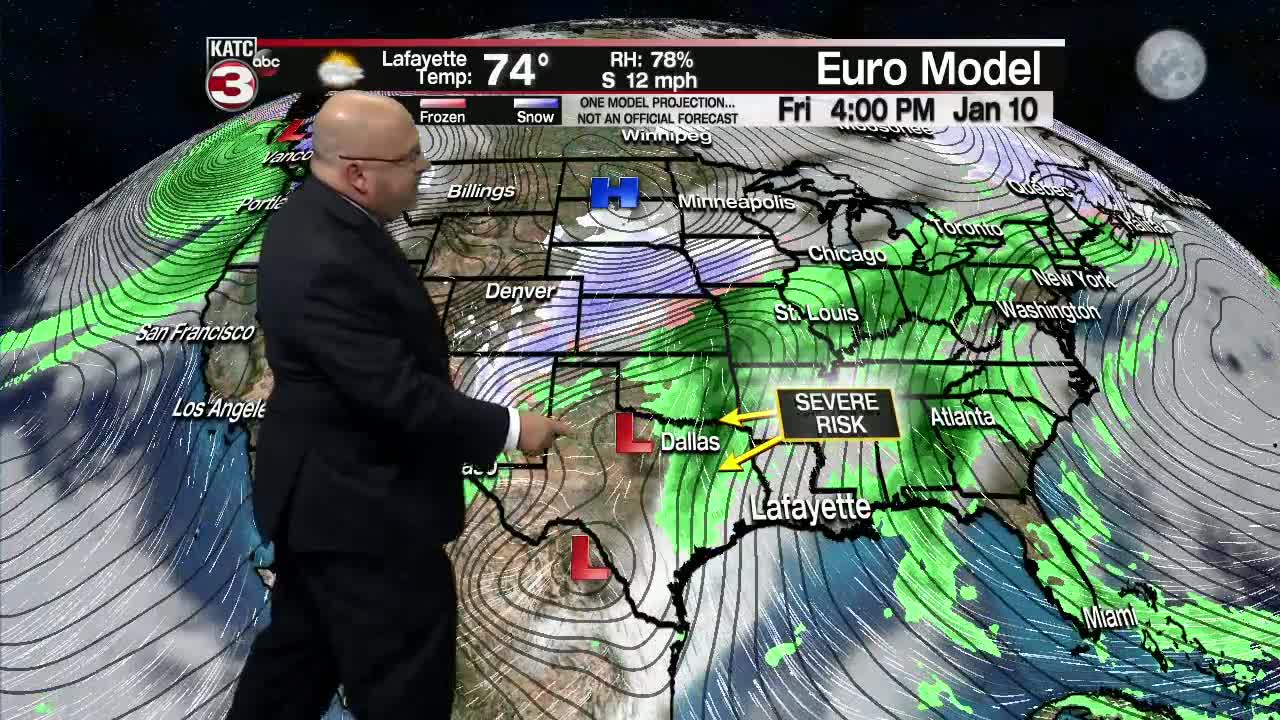 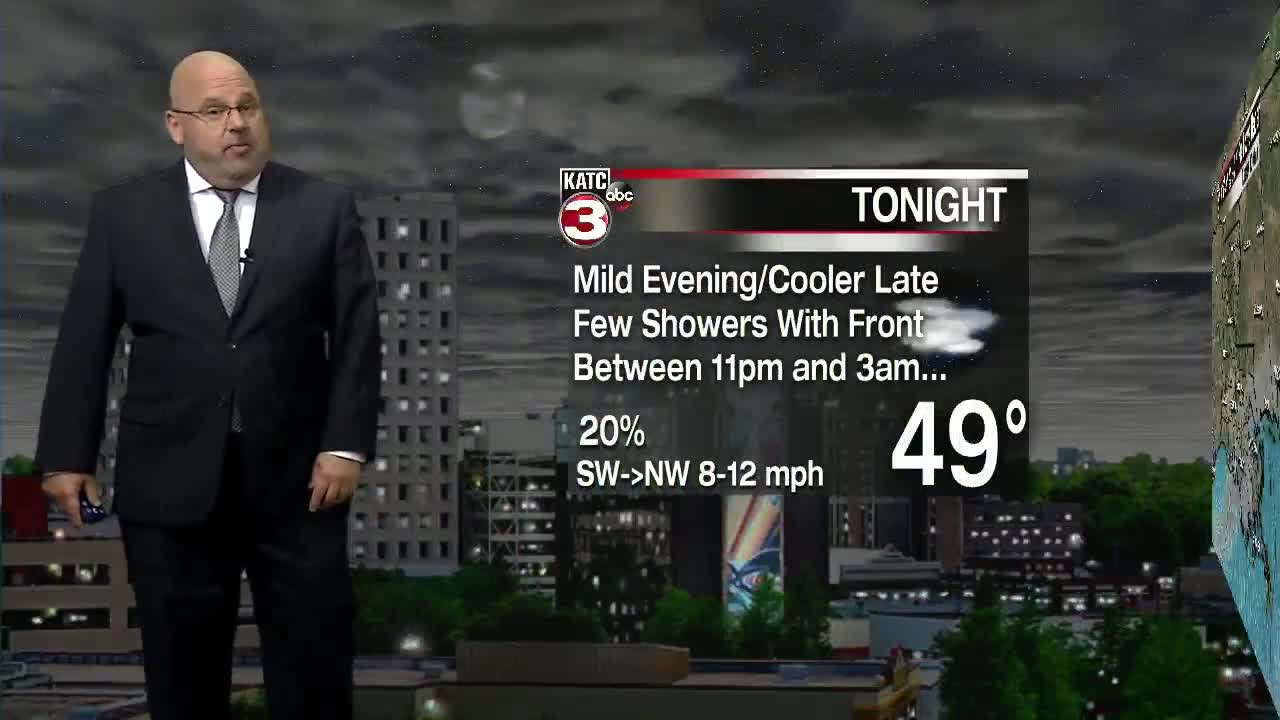 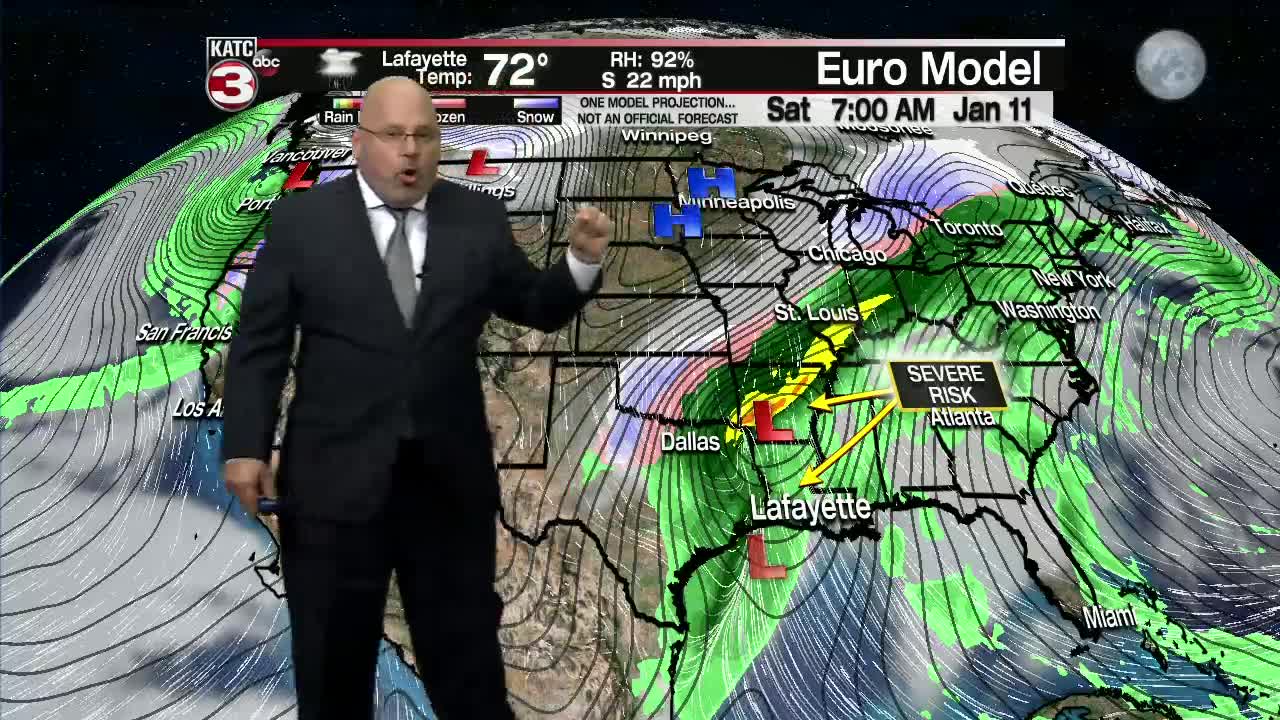 Later on tonight a weak cool front will slide across Acadiana producing a few light showers/drizzles from about midnight til 4 am.

Behind this front a winter chill returns as temperatures will be 10-15° cooler with highs only in the upper 50s to lower 60s on Tuesday.

Winds will also be picking up on Tuesday out of the north at 10-15 mph adding an extra chill to the air.

Wednesday morning we will see our coldest temperatures with lows dipping into the mid to upper 30s.

It will be another seasonably cool afternoon on Wednesday with highs in the low to mid 60s under mostly sunny skies.

Thursday a southerly flow returns sending warm and breezy conditions over Acadiana as highs climb into the low to mid 70s.

The warm and breezy conditions continue on Friday with temperatures pushing the mid to upper 70s and winds steady out of the south at 10-20 mph, with gusts up to 25-30 mph.

A few hit or miss showers will be possible Friday but rain chances really increase Friday night into Saturday morning as a low pressure system and cold front swings through the region.

This system will pack a punch for areas just to our north towards the ArkLaTex where they have been placed under an enhanced risk (30%) for severe weather Friday night into Saturday morning.

Areas near Shreveport will have a good chance to see a few tornadoes, large hail and damaging winds with this weather maker.

As for Acadiana we are hatched in for a slight risk (15%) for severe storms Saturday morning as it looks like a squall line will develop just ahead of the cold front.

Our main threat looks to be damaging winds up to 60 mph with the squall line but a few brief spin-up tornadoes can not be ruled out.

And with this being a relatively fast moving system rainfall totals for Acadiana look to be near one inch, thus flooding will not be an issue.

The good news is most of the rain should slide to the east by early afternoon and we could even have a few peeks of sunshine Saturday afternoon.

However, temperatures will fall behind the front so we will be sitting near the upper 50s during the afternoon.

Sunday will be the pick day of the weekend with partly cloudy skies and highs in the low to mid 60s.

Moving into next week a warm Spring-like pattern moves over the region with temperatures in the low to mid 70s as a warm front will be situated right along the coast producing the chance for daily showers Monday through Wednesday.