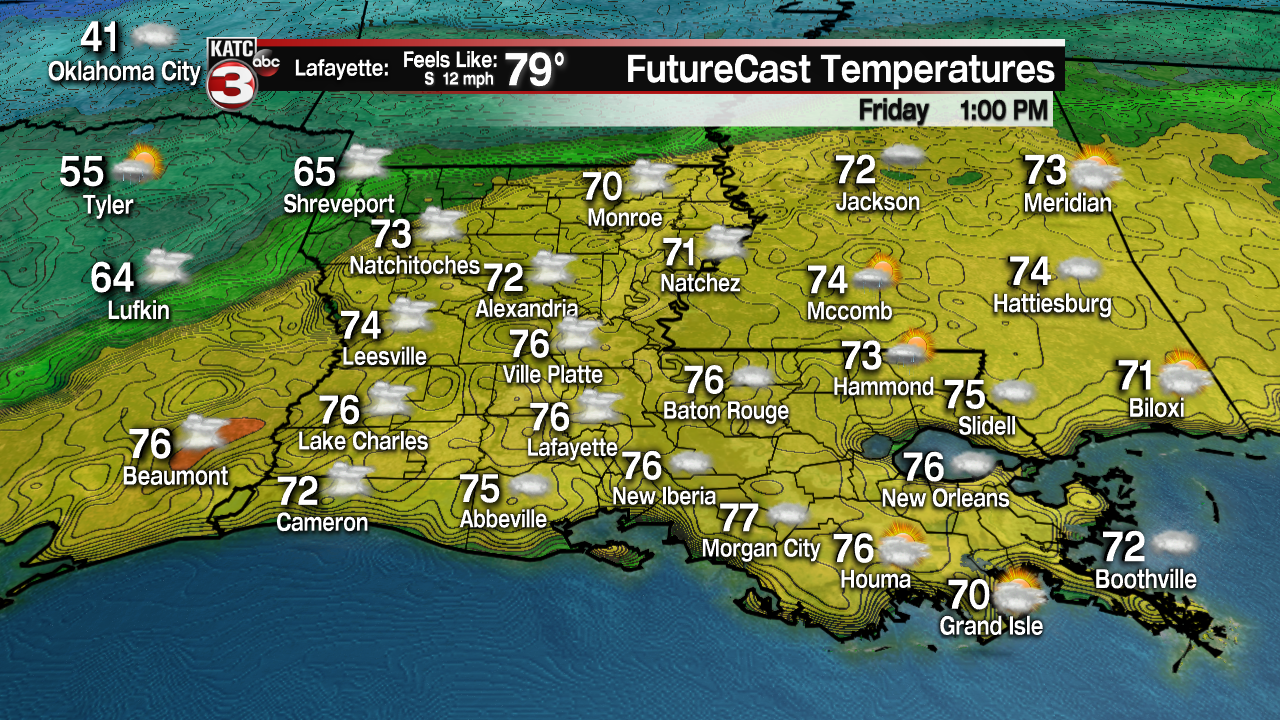 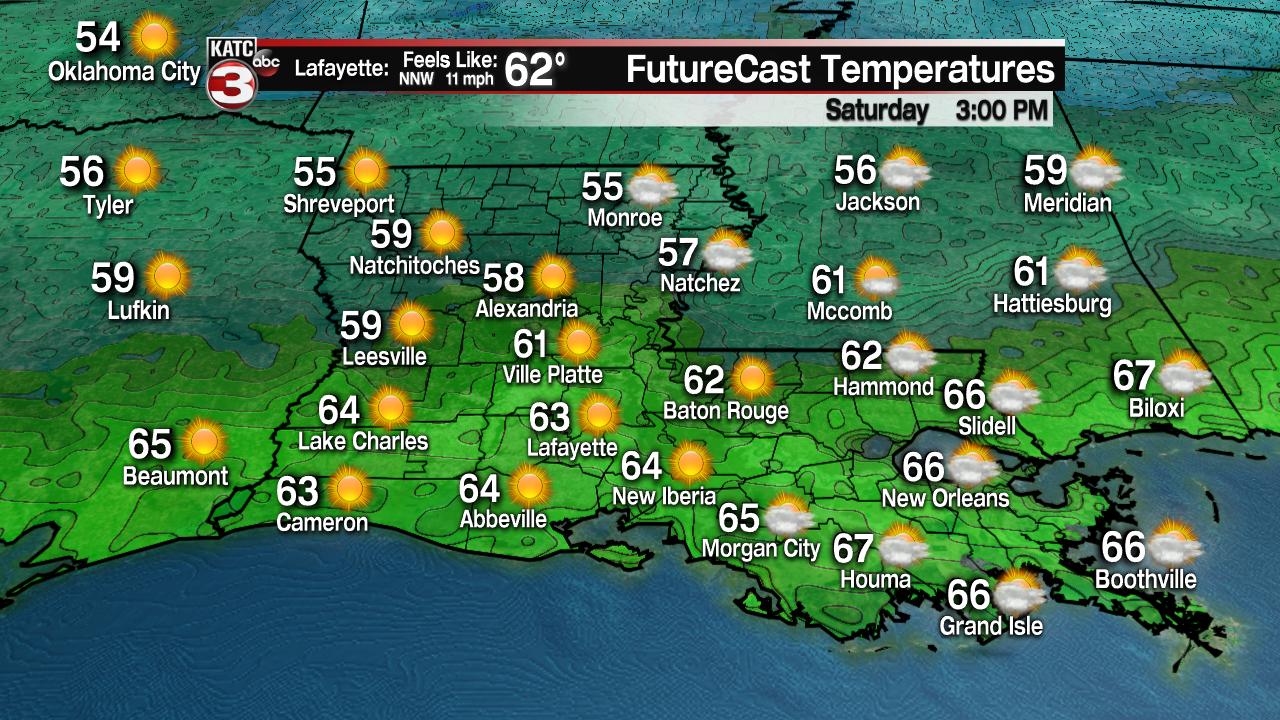 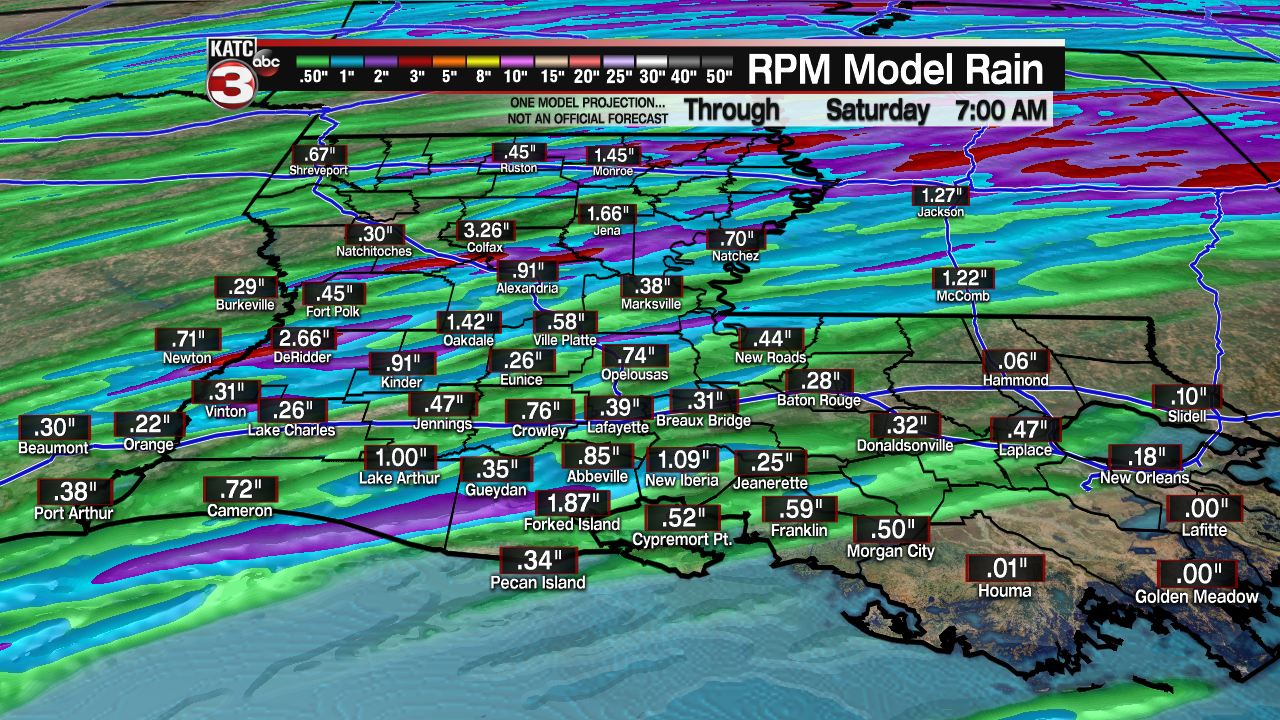 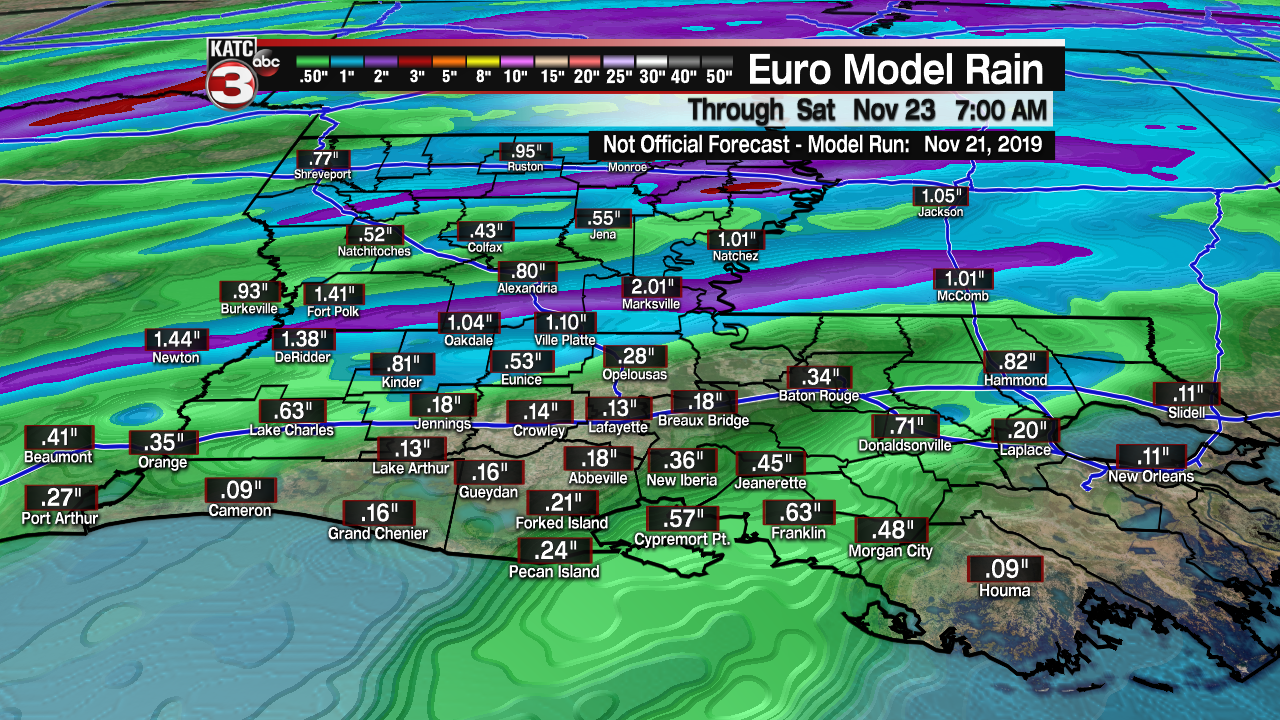 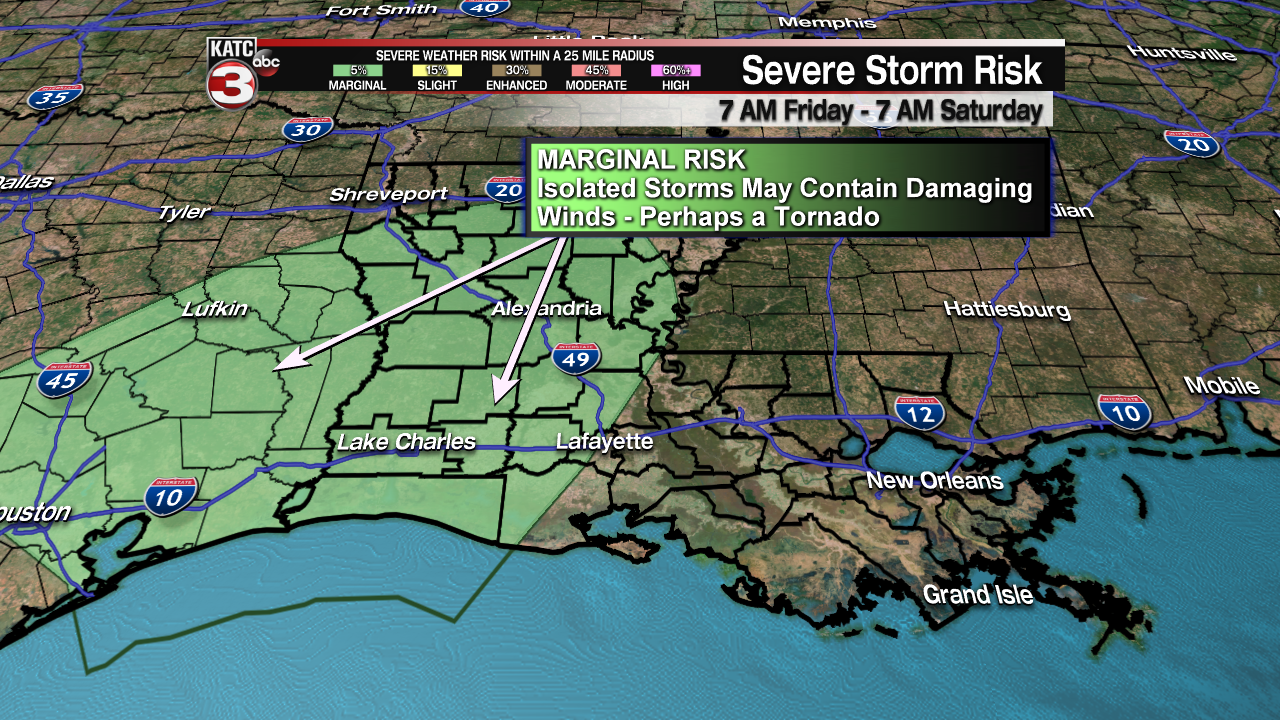 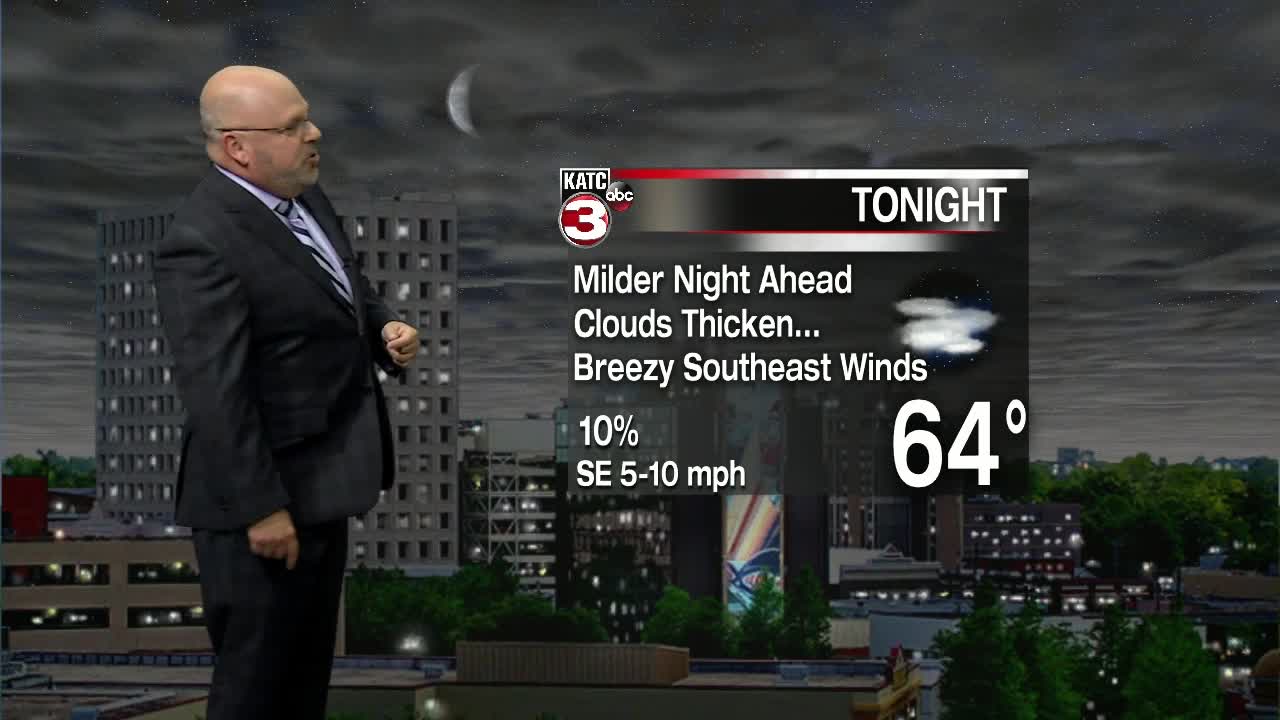 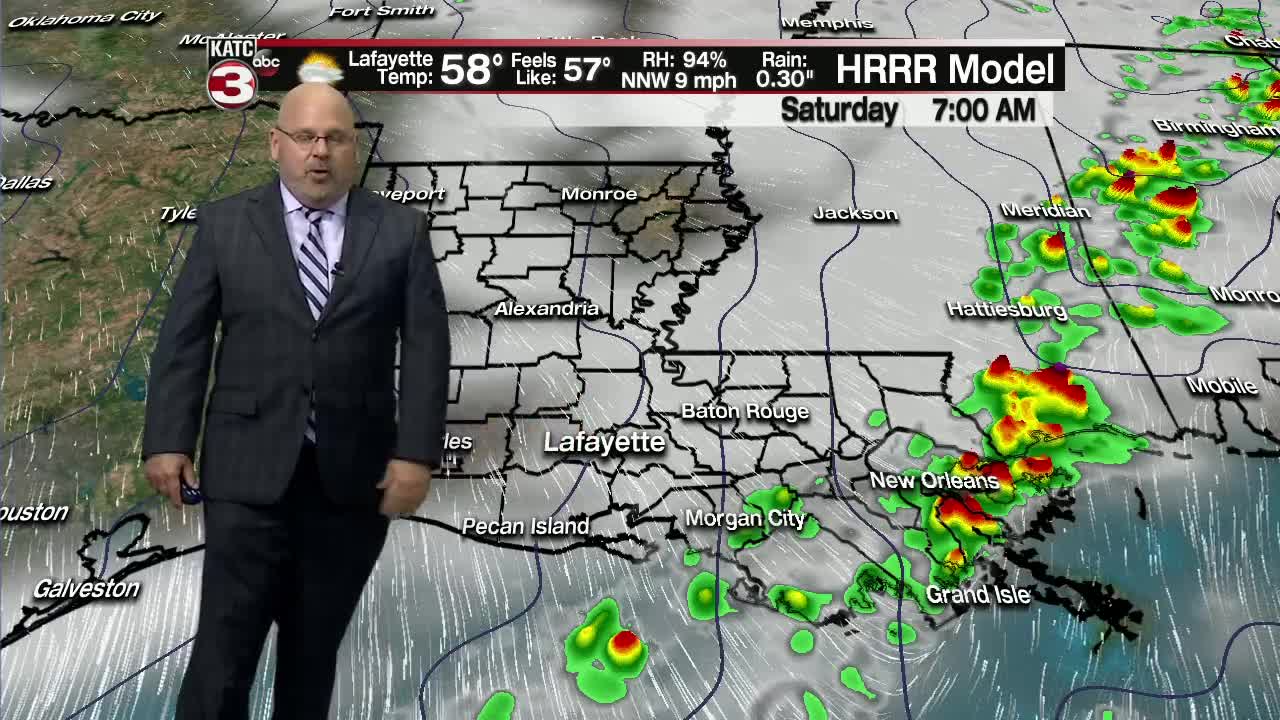 High clouds will continue to be on the increase for Acadiana through Friday with a good chance of scattered showers and thunderstorms expected to develop ahead of a cool front for the afternoon and especially into the evening hours.

The clouds will also hamper viewing the meteoric "outburst" expected around 10:50 pm Thursday night...more on that later.

Temperatures will be milder overnight thanks to the aforementioned clouds and a breeze from the southeast with lows generally in the low-mid 60s across the area.

Cloudy, breezy and seasonably warm conditions are anticipated for our Friday with the risk of a few showers passing by in the late morning, becoming scattered, with embedded thunderstorms into the afternoon.

Temperatures Friday will top out in the upper 70s.

A broken line of showers and storms will follow into Friday night preceding and accompanying a cool front that will pass within several hours of midnight Friday night into Saturday morning.

In addition, the Storm Prediction Center has the western half of Acadiana hatched in for a marginal risk of an isolated severe thunderstorm or two that could produce damaging winds. While the risk of an isolated tornado is even lower (at 2%), but it's not zero.

It appears that if any storms that might go "severe" would occur primarily during the daytime hours when maximum heating would contribute atmospheric destabilization.

The system Friday will be progressive in nature so rainfall generally will be likely be in the 1/3-2/3" of an inch range, with a few isolated spots possibly catching an inch or two in and where heavier storms manifest. No flooding however, is expected.

The shower activity will end toward daybreak Saturday with clouds lingering through mid-morning before skies clear for the afternoon and Acadiana resumes sunny and cool conditions for th erest of the weekend.

Look for highs this weekend to drop back down into the low to mid 60s while overnight lows drop into the low-mid 40s.

Next week's weather pattern is all over the map...pun intended (with Euro and GFS models at odds) with initially warmer temperatures Monday and Tuesday, cooler conditions Wednesday with a general warm-up Thanksgiving into other weekend that follows.

Some rain chances are in the 10 Day Forecast, with best chance during the week coming Tuesday...a few more showers might be expected sometime next weekend if an advertised front reaches the area by next Sunday.

It appears that Acadiana may have a few shots at 80 degrees in between fronts next week!

Viewing the meteor "storm" or "outburst":

Given good sky conditions, which are not expected for Acadiana, the Monocerotids Meteor "Outburst" will peak at 10:50 pm Thursday night.

If clouds are absent (and that's a big "IF"), look low in the east-southeastern sky below Orion toward the Monoceros Constellation (Greek for Unicorn...thus also called the Unicorn Meteor Storm).

It will be a good show where crystal clear skies are available, and that doesn't appear to be here in Acadiana, but will have updates on our newscasts and social media pages through tonight on the status of our cloud cover.